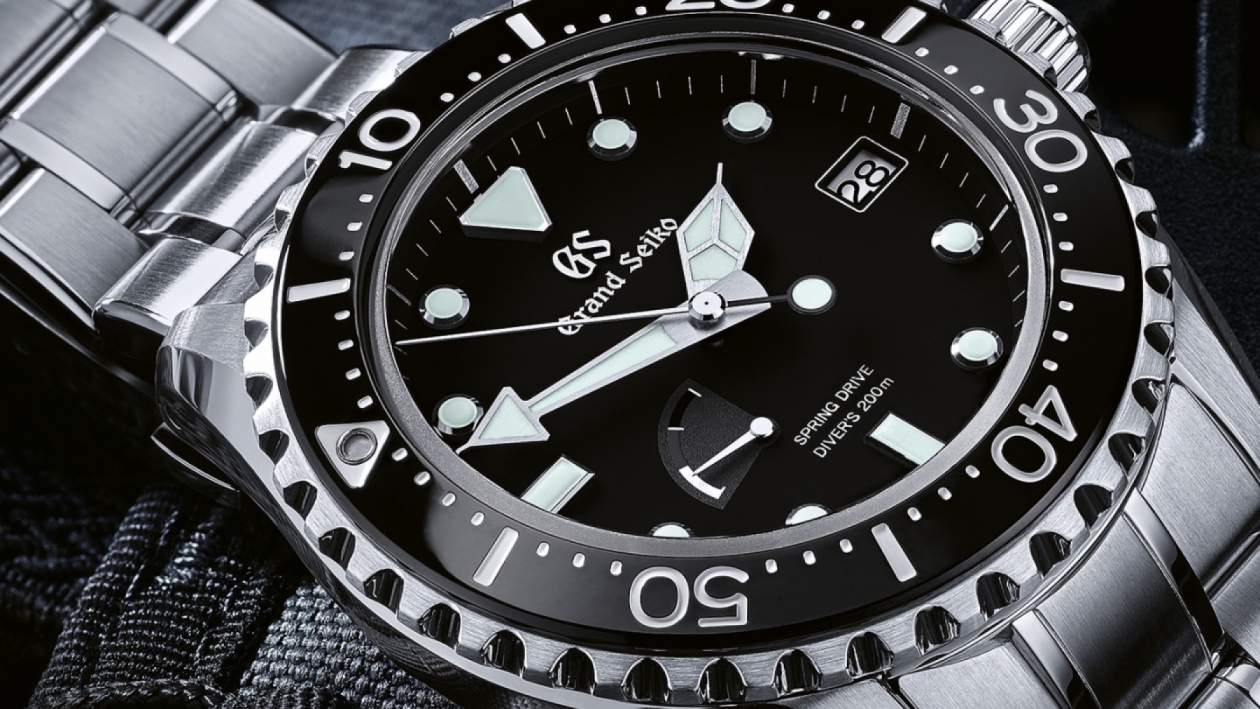 Grand Seiko’s SBGA229 divers’ watch combines traditional mechanical watchmaking and the precision of electronic timekeeping. This is made possible by Spring Drive technology, developed by Seiko, and the result is an authentic divers’ watch with a unique inner life.

Grand Seiko stands at the fore-front of Japanese watchmaking, and one-of-a-kind Spring Drive technology is regarded as the best that Seiko has ever produced. So it stands to reason that this innovation has joined the Grand Seiko collection, which traces its ancestry to the 1960s and to the idea that form follows function. The combination of mechanics and electronics seems perfect, but nevertheless, it took several years for Spring Drive technology to be integrated into Seiko’s exclusive line. 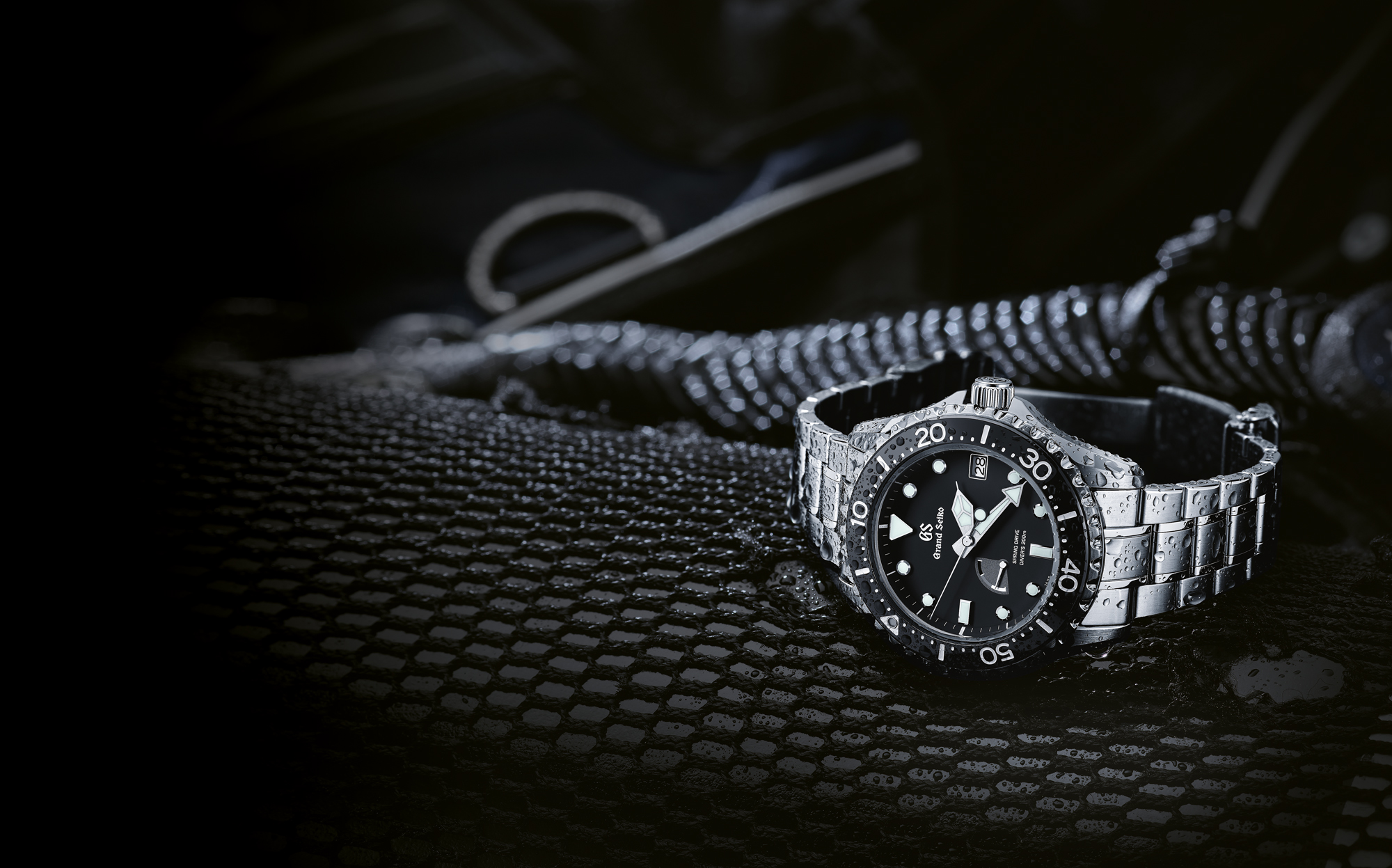 Seiko premiered Spring Drive technology in 1999, but the lack of a sufficiently effective automatic winding system and, as a result, the short duration of the power reserve initially dissuaded the brand from incorporating the technique into Grand Seiko. Several years of further development culminated in the Calibre 9R Spring Drive in 2004. Our test watch encases the 9R65 version, which shows the date and the remaining power reserve. Its automatic winding system relies on the Magic Lever: Seiko originally developed this ratchet winding system in 1959 and subsequently enhanced its efficiency, simplified its maintenance and lengthened its durability. The power reserve has been extended from 48 hours in the hand-wound calibre to 72 hours in the self-winding movement. Calibre 9R65 is now the most widely used 9R Spring Drive movement in various Grand Seiko models. Its development was only possible because Seiko has the necessary expertise in both mechanics and electronics.

Spring Drive combines the traditional spring power of a mechanical movement and state-of-the-art electronics that require neither a battery nor any other external energy source. The movement generates its energy in the traditional way, thus making the watch wholly independent of external power sources. The mainspring provides the power at one end of the gear train. A conventional escapement is replaced at the other end by a regulating system, which generates a small electrical charge that activates a quartz oscillator. Instead of an escape wheel, a glide wheel rotates uniformly over an electromagnetic coil, thus generating electrical current, which is conducted to an integrated circuit (IC) and a quartz crystal. While the quartz vibrates at an unchanging frequency, the IC calculates the required electro-magnetic pulse, which regulates the rotational speed of the glide wheel and thus the rate of the movement. Unlike an escape wheel, the glide wheel is not subjected to mechanical intervention, so scarcely any power is lost due to friction. Spring Drive accordingly achieves a far more accurate rate than a mechanical escapement. Seiko calculates the average deviation at 0.5 second per day and at most, 15 seconds per month. We measured a deviation of 0.1 second per day on the wrist. After half a month, our test watch had gained 2 seconds. 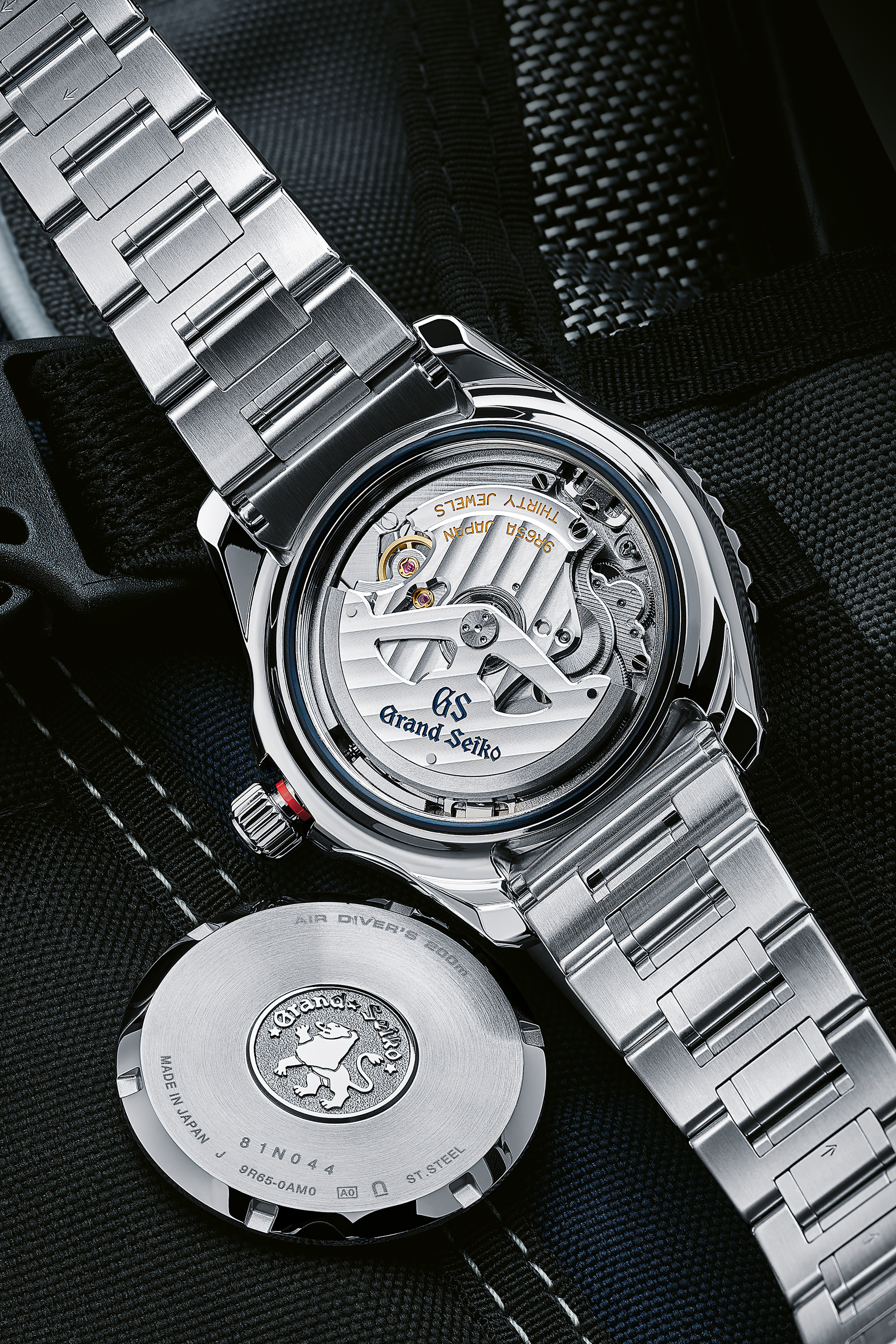 Spring Drive uses quartz technology to regulate the running of a mechanical movement, thereby attaining much greater accuracy than a purely mechanical movement could achieve. Credit for this precision goes to the Tri-synchro regulator system, which converts the mainspring’s mechanical energy into electrical current for the integrated circuit and the quartz crystal. While the crystal oscillates evenly, the IC regulates the watch’s rate by giving impulses to the glide wheel.

The glide wheel rotates clockwise 28,800 times per hour. This pace corresponds to the number of semi-oscillations completed each hour by the balances in modern mechanical movements. But unlike an escape wheel, the glide wheel is not repeatedly halted and released, so the seconds hand advances smoothly around the dial rather than progressing in individual steps. Of course, the characteristic ticking sound is not produced, but the silent gliding of the seconds hand makes the Spring Drive’s time display unique.

A luminous dot glides above the dial at the short end of the seconds hand. This dot’s luminosity and steady rotation are particularly important during a dive because they assure the wearer that the watch is still running. The hour and minutes hands are also amply equipped with Lumibrite, a luminous paint developed by Seiko. These hands are clearly distinguishable from each other because each has its own distinctive shape. In tandem with multifaceted luminous appliqués, they offer optimum legibility under all lighting conditions for which Seiko’s diving watches are renowned. 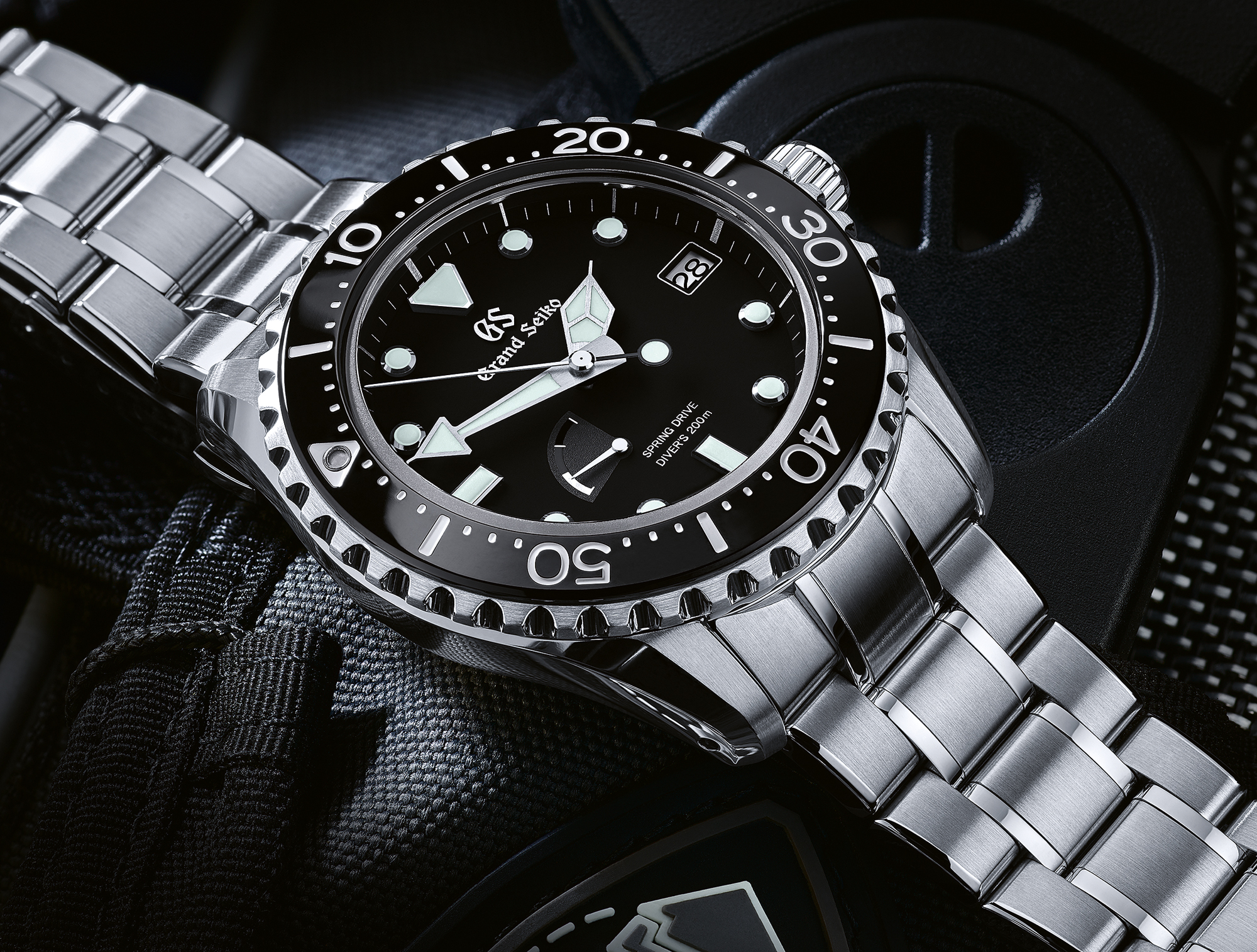 During the day, strong black-and-white contrasts beneath the anti-reflective sapphire crystal leave no doubt as to the time. The power-reserve display at 8 o’clock looks somewhat unusual: as the power in the mainspring decreases, this display’s hand gradually sweeps from the bottom to the top of a 90° arc. The hand points to the white sector at the bottom of the arc when the main-spring is fully wound, but the power-reserve display would have been easier to understand if the critical phases of the declining power reserve were marked by the white segment rather than by the grey and then the black portion of the arc. The date at 3 o’clock is very easy to read: this indicator begins to switch one hour before midnight and jumps ahead to show the next day’s date shortly after midnight. It can be manually adjusted by turning the crown after it has been pulled out to its middle position.

A Professional Divers’ Watch in a Prestigious Price Class

As befits a divers’ watch, the crown is sturdy, knurled, can be screwed down and is protected against shocks by lateral flanks. The crown remains easy to operate in every situation. The unidirectional rotatable divers’ bezel is equally user friendly; it snaps smoothly into place in half-minute increments, is calibrated with markings for almost every minute and is affixed to a case that has been given the special Zaratsu polish in Seiko’s Shinshu Watch Studio. Here, each stainless-steel case is manually polished to a high gloss by gently pressing it against rotating abrasive disks. The bezel is inlaid with titanium carbide, an especially hard and shatterproof composite of titanium and carbon. The divers’ bezel guarantees a secure grip thanks to its ergonomic angle and its notched perimeter. Last but not least, the case is pressure resistant to 20 bar and tightly sealed by a massive screwed back adorned with Grand Seiko’s lion emblem. 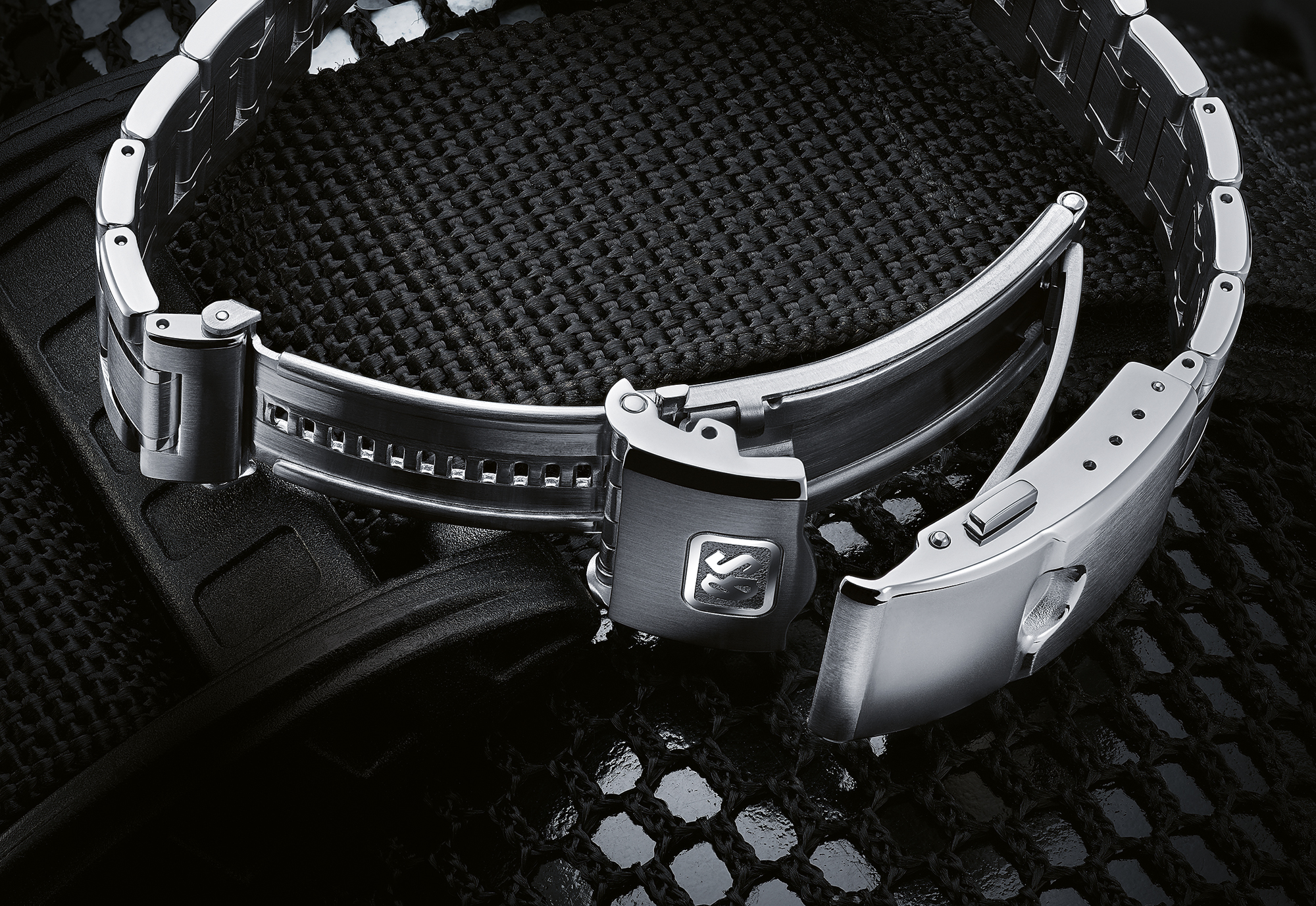 The deployant clasp, which has hinges on one side only, is a technical highlight. In addition to lateral push buttons for opening the closure and a safety bow, this clasp also integrates an extremely functional extension mechanism. Without having to open the clasp, the wearer simply unlocks the safety and can add more than three centimetres to the bracelet’s length. The extension process progresses incrementally through 14 locking points. The band can be shortened again simply by pushing it back into the clasp. Like the entire stainless-steel band, the clasp is extremely supple and feels very comfortable on the wrist. The manufacturer’s recommended retail price (INR 4.26 lakh approx.) puts the Grand Seiko Spring Drive Diver SBGA229 close to the elite company of Rolex (the Oystersteel Submariner with no date is INR 5.32 lakh approx.) and above the stainless-steel version of Omega’s Seamaster Diver 300M (INR 3.69 lakh approx.). These Swiss brands offer 100 more meters of pressure resistance and, for the Omega, greater resistance to magnetic fields. Despite its technologically unique electromechanical calibre, the Grand Seiko will have to work hard to assert itself in such a competitive environment.

In Conversation with the new C

The Unsung Audemars of Gérald 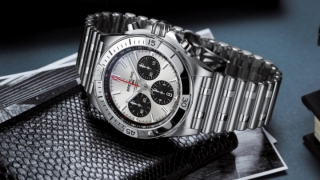