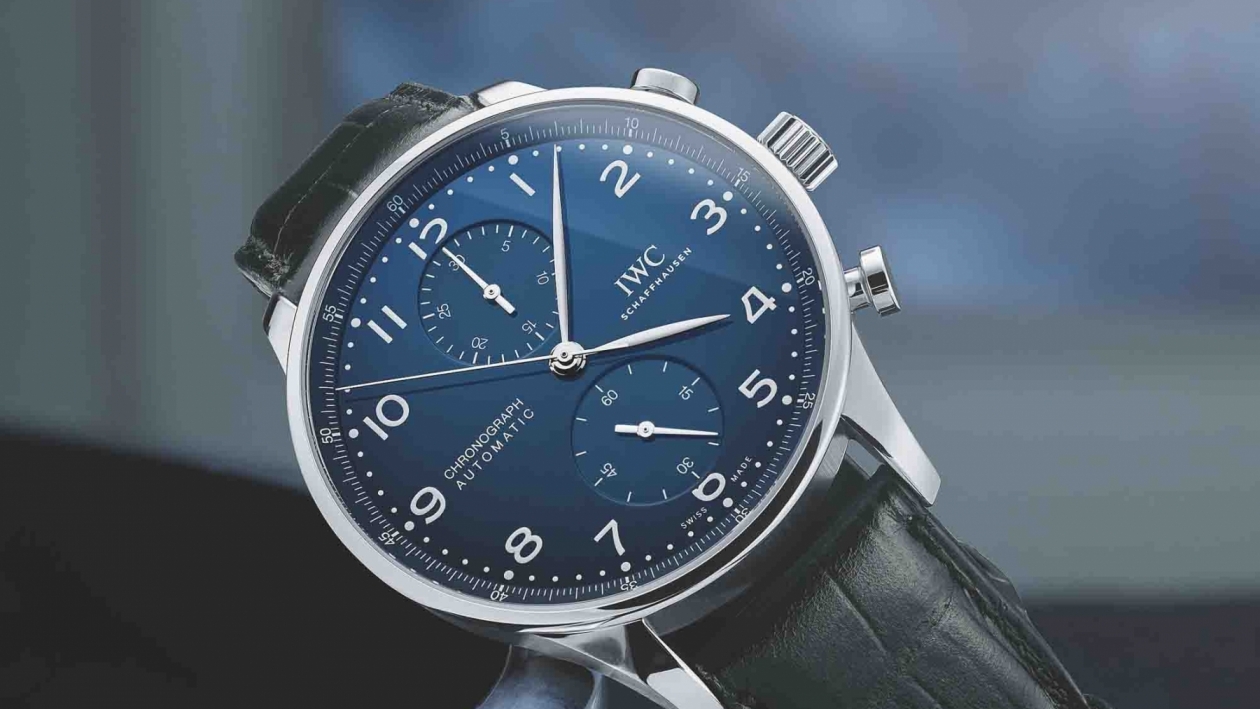 At the beginning of last year, IWC introduced a 150-year anniversary edition of its Portugieser Chronograph as a limited-edition model alongside the original Portugieser Chronograph, which debuted in 1998. The most significant difference between the two is the movement: the unlimited version has a modified ETA Valjoux 7750, while the anniversary model is animated by the new manufacture calibre from the 69000 series. The newcomer’s case has been given a sapphire back and its dial boasts lacquered numerals; the standard model has applied numerals. The two watches are very similar in all other aspects, including their dimensions and proportions.

The Portugieser Chronograph has enjoyed strong popularity for many years and is one of IWC’s bestselling models. No one could have possibly predicted this success when the Portugieser’s history began in 1939. The story starts with two Portuguese businessmen who told IWC they were looking for a large wristwatch that could keep time with the accuracy of a ship’s chronometer. IWC responded by filling a 41.5-mm-diameter steel case with Calibre 74H4, which was originally used in pocket watches and is more than 38 mm in diameter. 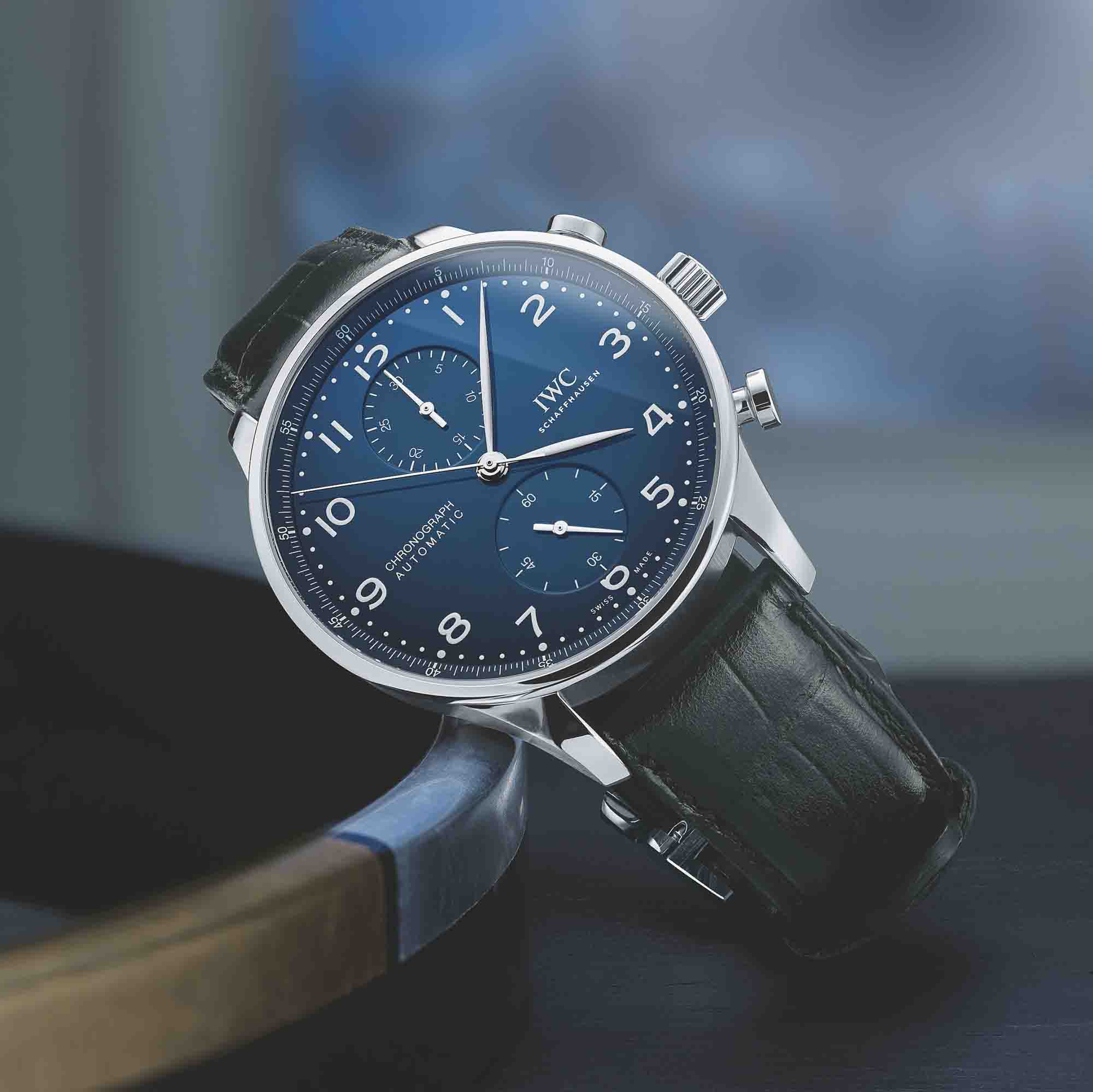 This hand-wound wristwatch was given a neatly designed dial with a railway-style minutes circle, Arabic numerals and a subdial for the seconds at 6 o’clock. In an era when gents preferred to wear small and elegant wristwatches, the Portugieser must have looked like a gigantic measuring instrument strapped to its wearer’s wrist. The first models were manufactured in rather small numbers: after making only a few hundred specimens, IWC discontinued production of the Portugieser in 1958.

Success finally came more than three decades later, in 1993. That’s when IWC built a limited edition Portugieser, which again encased a pocket watch Calibre. Now the time was ripe for this elegantly simple watch. And IWC’s clientele was enthusiastic. The Schaffhausen-based brand followed suit in 1998 with the Portugieser Chronograph, which is the direct ancestor of the watch we tested. Large watches were gradually coming into fashion in the late 1990s. IWC hadn’t debuted a manufacture Calibre in many years, but this situation changed in 2000, when the brand decided to encase its newly created manufacture movement inside the Portugieser. Automatic Calibre 5000 ticked inside the Portugieser Automatic, which was released in a limited edition of 2,000 pieces. The Calibre amassed a seven-day power reserve and showed the current status of its “fuel tank” on an indicator at 3 o’clock, opposite a subdial for the seconds at 9.

When this Calibre debuted at the turn of the millennium, its diameter of 38.2 mm made it the world’s largest automatic movement. This was a courageous step because this Calibre would never have fit into a smaller watch. If the trend for large wristwatches had reversed itself, the big movement would have been useless. But history took a different turn, and the Portugieser was a big success. 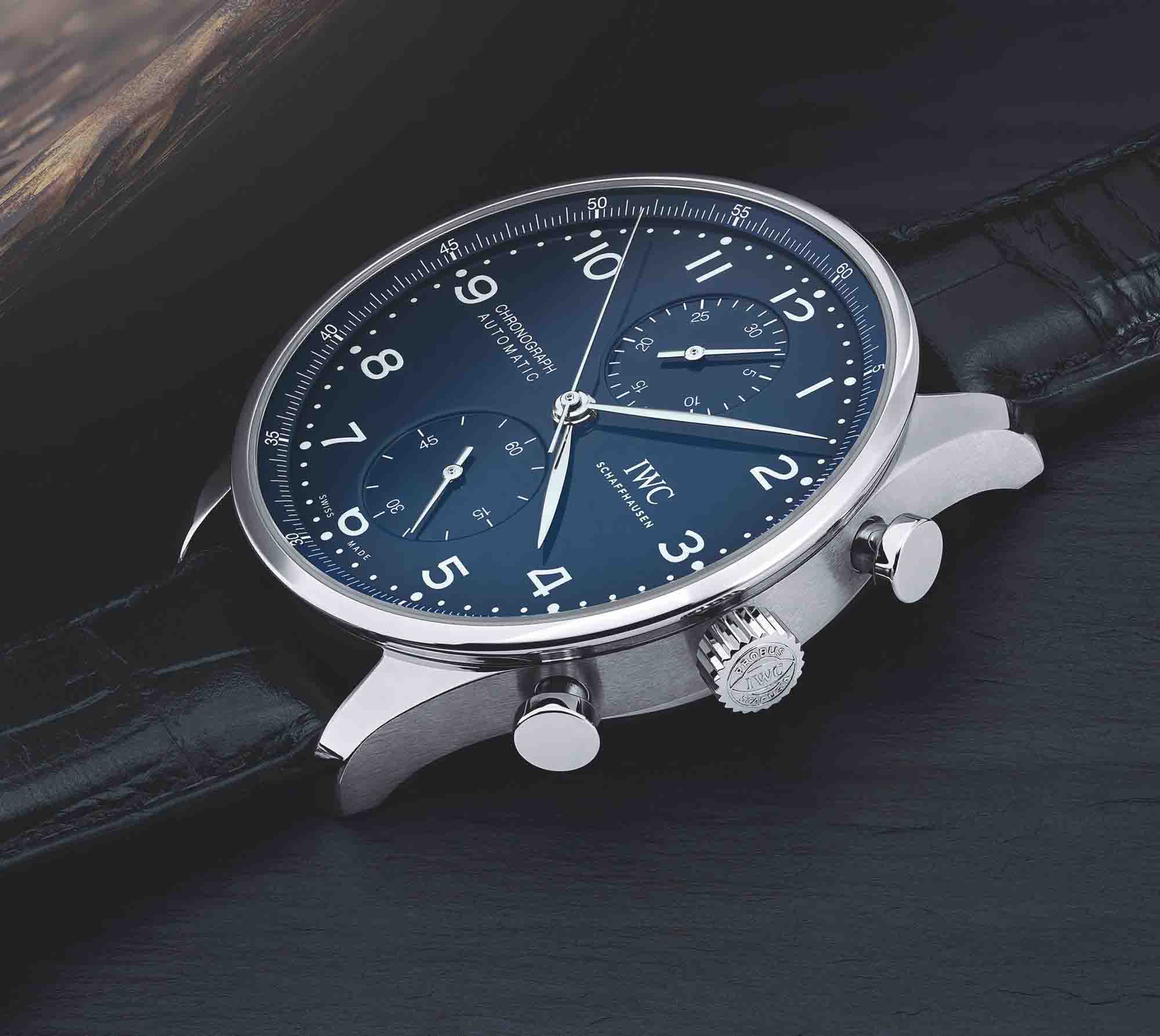 With a diameter of 41 mm, the Portugieser Chronograph is nonetheless 1 mm smaller than the Portugieser Automatic. This size was formerly considered to be large, but nowadays 41 mm is a normal size for a wristwatch with a built-in stop-seconds function.

The ETA Valjoux 7750 has served since 1998 as the basic movement for the unlimited edition of the Portugieser Chronograph. This Calibre was designed to display the continually running seconds on a subdial at 9 o’clock. To achieve the desired arrangement with the small seconds at the dial’s South Pole, the elapsed-hours counter had to be removed and replaced by a mechanism for the continually running seconds. Such modifications in movements have long been standard procedure at IWC. 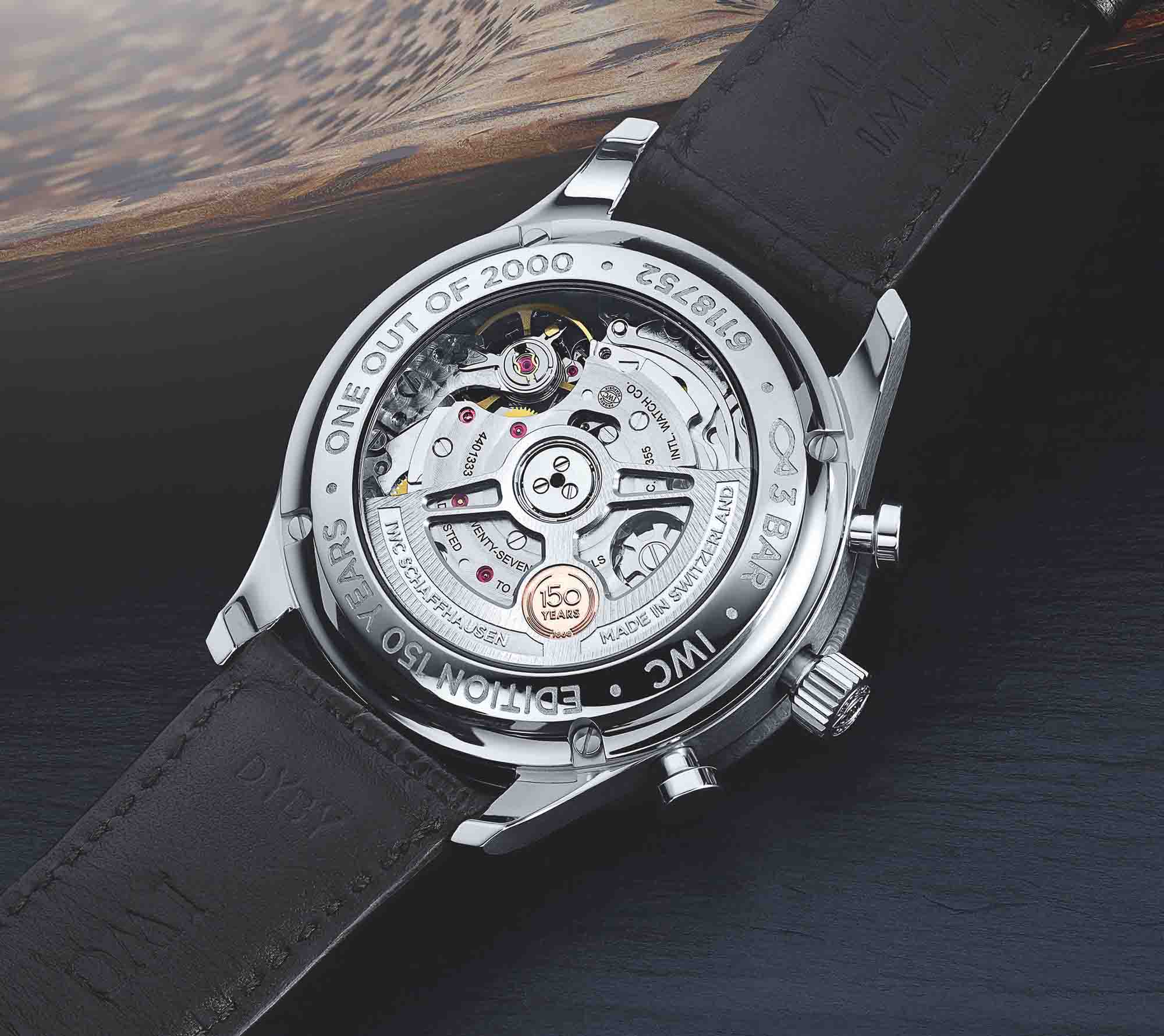 What will you have to do without if you choose the new manufacture movement rather than its more costly predecessor? In terms of function, you’ll have to settle for a shorter power reserve of 46 rather than 68 hours. You’ll also have to forgo a flyback function, which lets you start a new elapsed-time measurement while a previous measurement is underway. And you’ll have to live without a combined counter for the elapsed hours and minutes so you can read the elapsed time intuitively. From a technical standpoint, the new movement’s construction is somewhat simpler: its rate can be finely adjusted by shifting the position of a regulator lever rather than by turning eccentric weight screws along the rim of the balance. Both calibres are equipped with an elegant column wheel to control the chronograph’s functions, a rocking pinion to couple the chronograph mechanism with the gear train and IWC’s characteristic pawl-winding system, which is based on a device invented by IWC’s former technical director Albert Pellaton, who developed the pawl-winding system for Calibre 85 in the early 1950s.

How accurate is the new movement’s rate when measured on the timing machine? Quite accurate indeed: we found 2 to 6 seconds of gain per day in the various positions and a greatest deviation among the positions of 4 seconds. When the chronograph mechanism is running, the balance’s amplitude decreases somewhat but remains within normal limits, and there’s hardly any change in the accuracy of the rate.

We also have good news about the craftsmanship of the stainless-steel case. Its satin-finished sides contrast attractively with the polished mushroom-shaped push-pieces and with the polished bezel, which widens upward. But the primary focus of the Portugieser’s styling is its dial. The bezel is narrow so nothing can distract from the elementary function of displaying the time. Sleek simplicity is the ideal solution here. 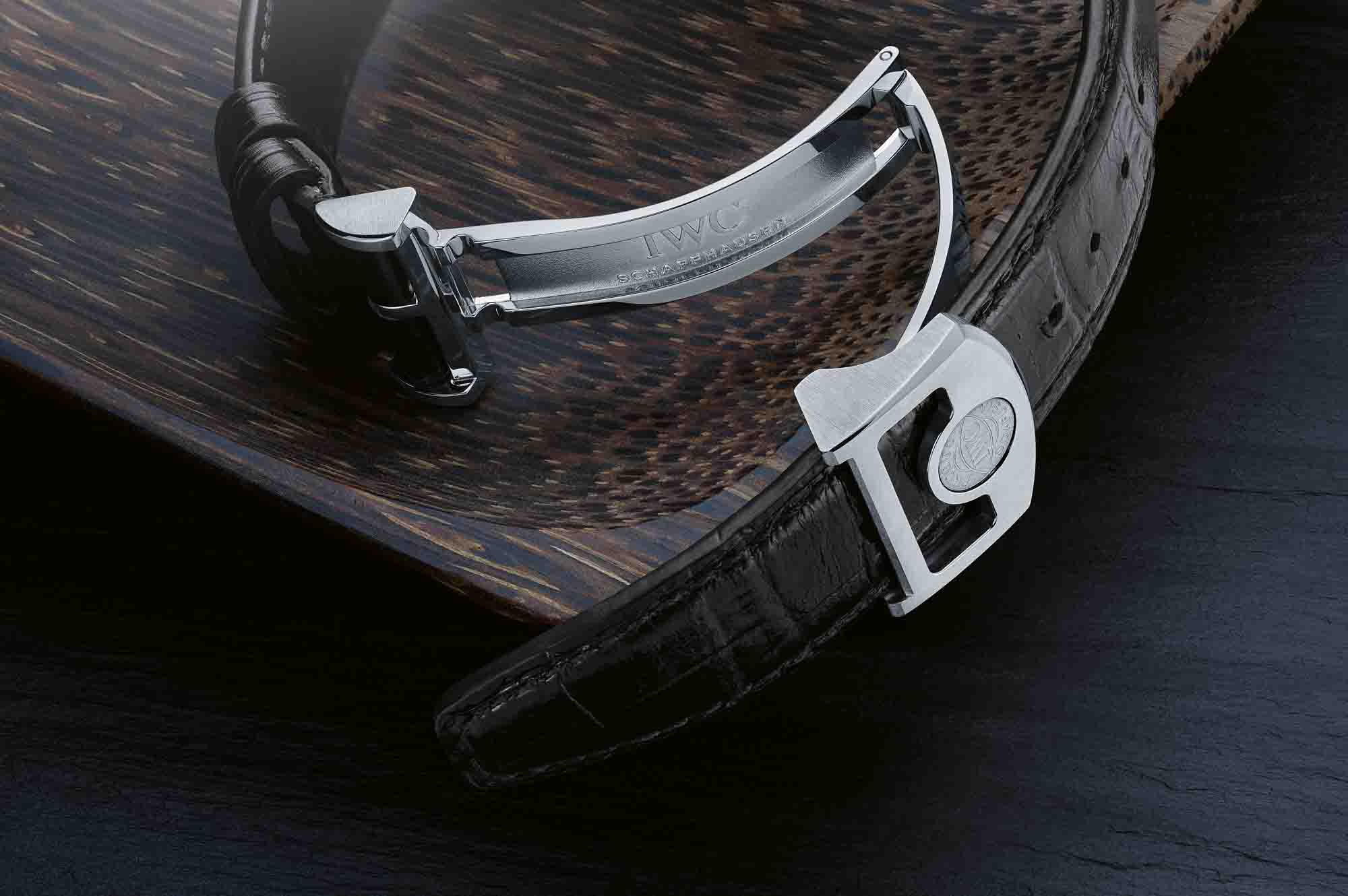 Straightforwardness also prevails on the push-pieces, which have large heads to facilitate their operation. This makes it easy to start and stop the chronograph. Triggering the zero-return button also requires little force, although this push-piece has no perceptible pressure point.

The case’s proportions promise a high degree of wearing comfort. And the watch fits with comfortable closeness around the wrist. Immaculate and very high-quality craftsmanship also distinguishes the alligator-leather strap, which is unfortunately a bit stiff at first.

The vertical arrangement of the subdials gives the Portugieser Chronograph a classical and almost aloof aura. The dial’s blue colour softens this austerity somewhat and gives the watch a sportier look. IWC also offers the anniversary model we tested with a white dial.

A fingertip’s pressure on the start button triggers the elapsed-seconds hand to begin sweeping around the dial. It advances in eight increments per second because the balance in the chronograph movement is paced at 28,800 vibrations per hour. These eighth-of-a-second steps correspond to the four strokes that subdivide each second on the scale along the ange. The rather large counters not only make it easier to read the data, but also serve as the dial’s stylistic focal points. IWC opted not to include a date display and has kept the lettering on the dial simple. Yet the dial’s surface doesn’t seem empty but makes a well-proportioned impression.

A beautiful thing about the Portugieser: it offers understatement without being inconspicuous. It radiates the same timeless aura that distinguishes a tailor-made suit or a pair of handmade shoes. With this watch on your wrist, you’re appropriately dressed in every situation. And the large size and lucid styling of the subdials and numerals make the Portugieser easy to read. But this holds true only when a light source is available. With a noteworthy absence of luminous material on the dial, this model leaves its wearer uninformed in the dark.

The generous subdials cause a stylistic conflict at the 6 and the 12. IWC solves this problem by truncating these numerals, a decision that shows the self-confidence of the brand’s designers. If these two numerals had been eliminated, their absence would have left unattractive gaps at two prominent positions on the dial. The only other option would have been to use a larger Calibre with counters positioned so far from the dial’s centre that the subdials would have completely covered the numerals, which would have detracted from the dial’s legibility.

All in all, the Portugieser Chronograph makes a very harmonious impression. The good design is undoubtedly why this model is so popular. The cost-benefit ratio and the absence of a manufacture Calibre previously argued against this model. But both arguments have been satisfied now. Although it encases the brand’s own Calibre, the anniversary edition of the Portugieser costs $7,150. And the case of this jubilee edition also has a sapphire back, through which you can admire IWC’s own mechanical timekeeper. Now you get more for your money and, above all, a manufacture movement, which ordinarily costs more at IWC. For example, the Portugieser Automatic with a seven-day movement costs $12,700.

The Portugieser Chronograph has always been handsome. Now it’s even more convincing, thanks to the combination of a manufacture movement and a relatively moderate price. What a great way to enjoy the blue hour! 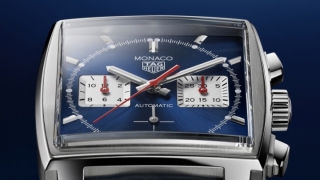