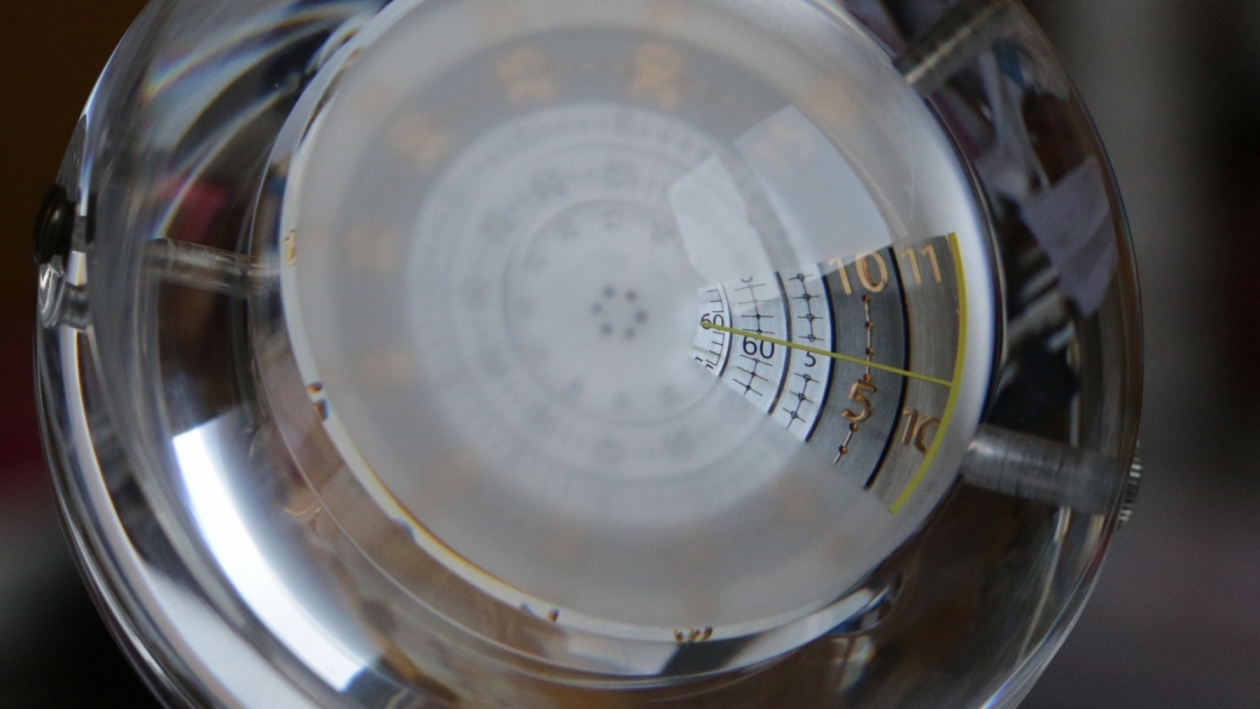 Agenhor submits its first watchmaking concept - the Carpe Diem clock - for the Only Watch 2017 charity auction in Geneva scheduled for the 11th of November.

A watchmaking workshop introduced by Catherine and Jean-Marc Wiederrecht in 1996, Agenhor is a platform devoted to the design, construction, assembly, and finishing of complications, modules, and movements for watchmaking. Joined by their sons, Nicolas and Laurent, the company has established a strong international reputation over the years. Well-known for their precision and professionalism, the workshops have developed and produced horological complications for most of the leading names in watchmaking, which have gone on further to winning prestigious accolades including the GPHG - Grand Prix de l’Horlogerie de Genève awards. 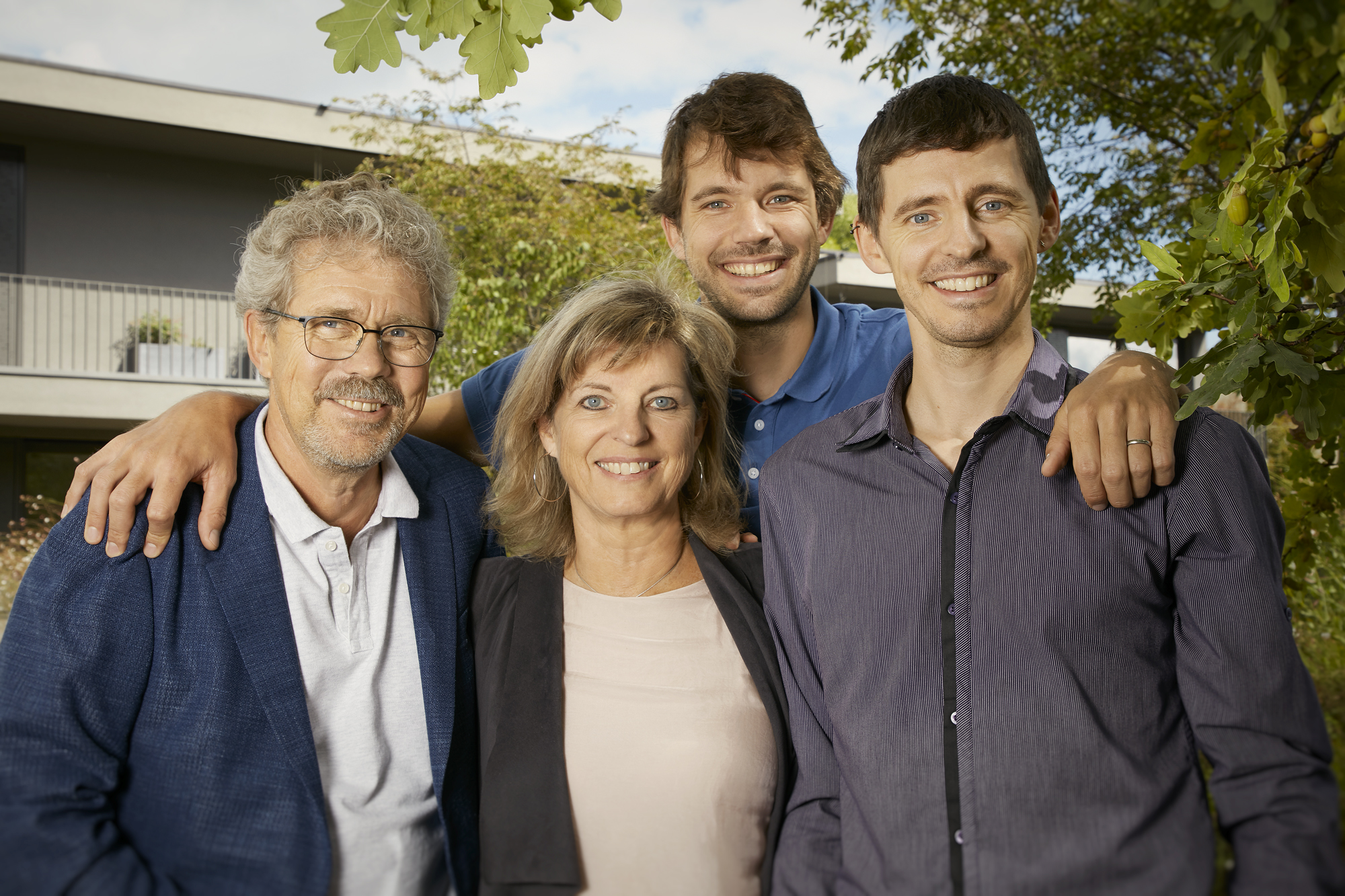 "Emotion was at the heart of all their labours. All we did was supply the movement in question." Jean-Marc Wiederrecht Founder, Agenhor

This year, a first for Agenhor, the company has submitted its own watchmaking concept for the Only Watch auction – a miniature table clock. The clock has been produced entirely by the firm, without any brand name being associated with it – a first time for the charity watch auction as well, making this a world exclusive.

The clock, Carpe Diem, was the result of the perseverance and passion of the students studying at HEAD – the Geneva University of Art and Design dedicated to the subjects of communication, visual arts, and design. 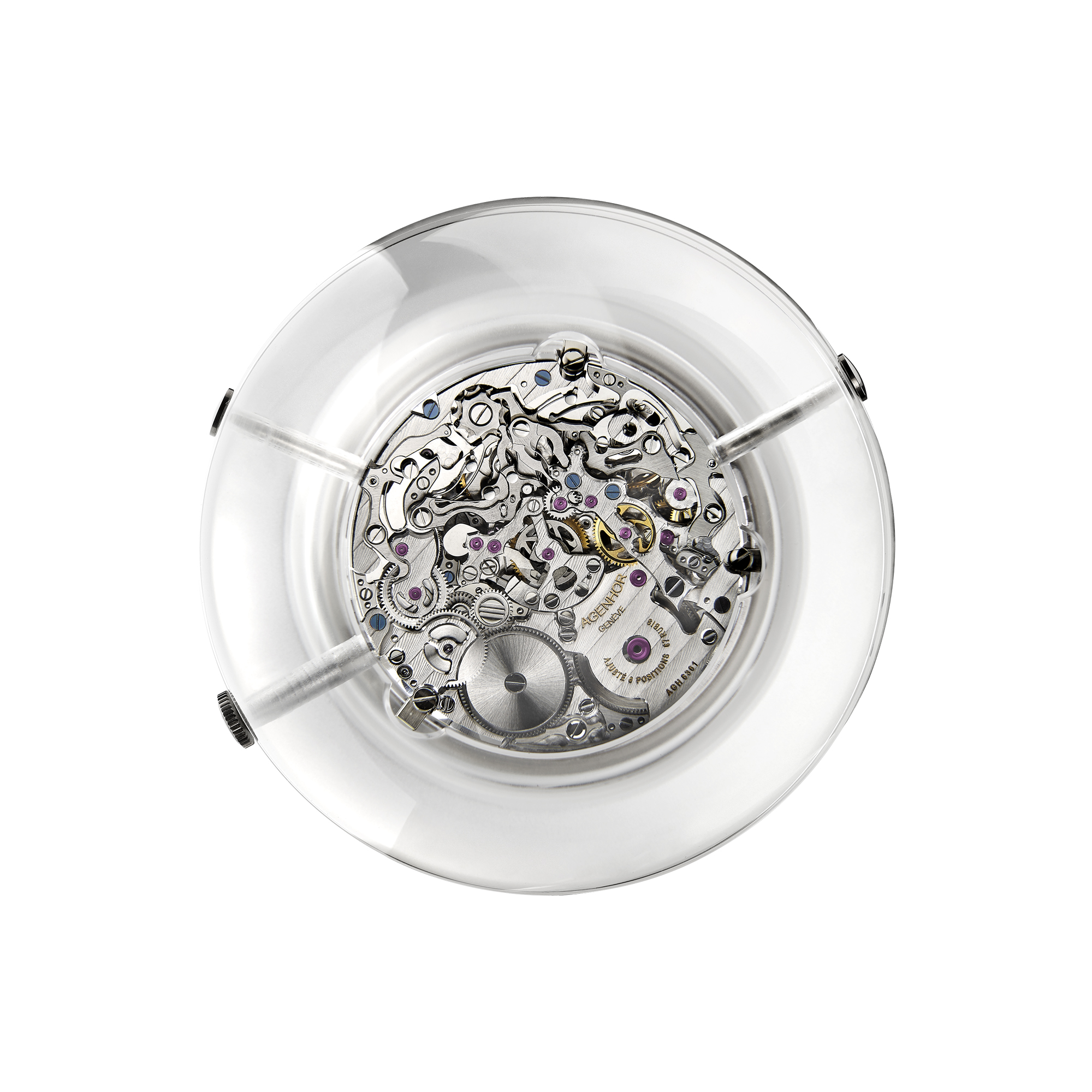 “We saw unprecedented commitment by the students and their teacher from HEAD’s sec- ond-year jewellery class,” explains Agenhor founder Jean-Marc Wiederrecht. “Emotion was at the heart of all their labours. All we did was supply the movement in question – they took it all from there. The students made seven proposals in total, all of them extremely well put together, but Carpe Diem, designed and presented by Bérénice Noël and Florian Wicki, stood out because of its emotional power, simplicity, and self-evidence.” 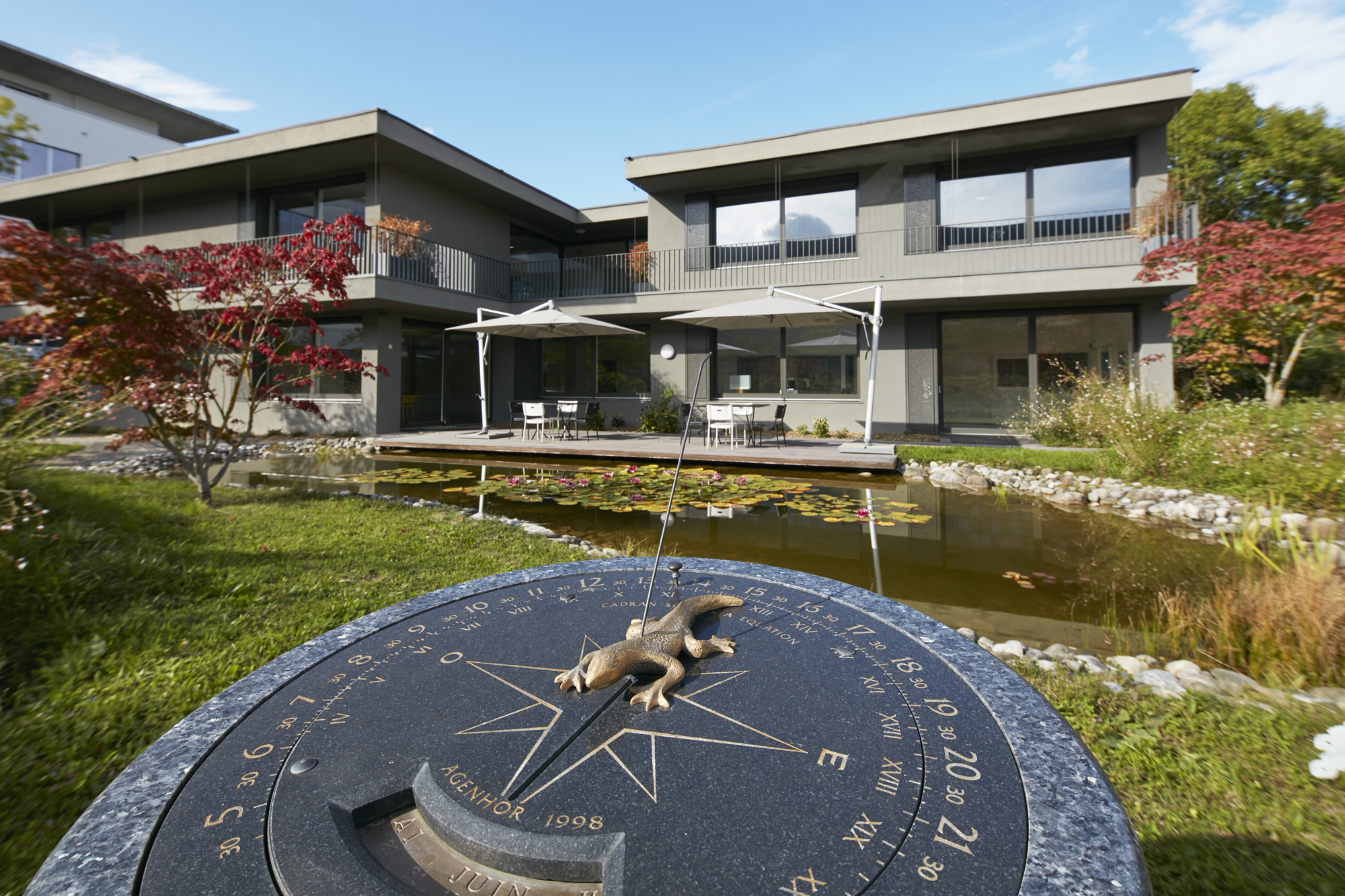 The clock, is simply an unfettered AgenGraphe® movement which was first revealed in February, earlier this year. Made up of 488 components, it is one of the few calibers to have been entirely developed by Agenhor – and the firm’s very first chronograph. 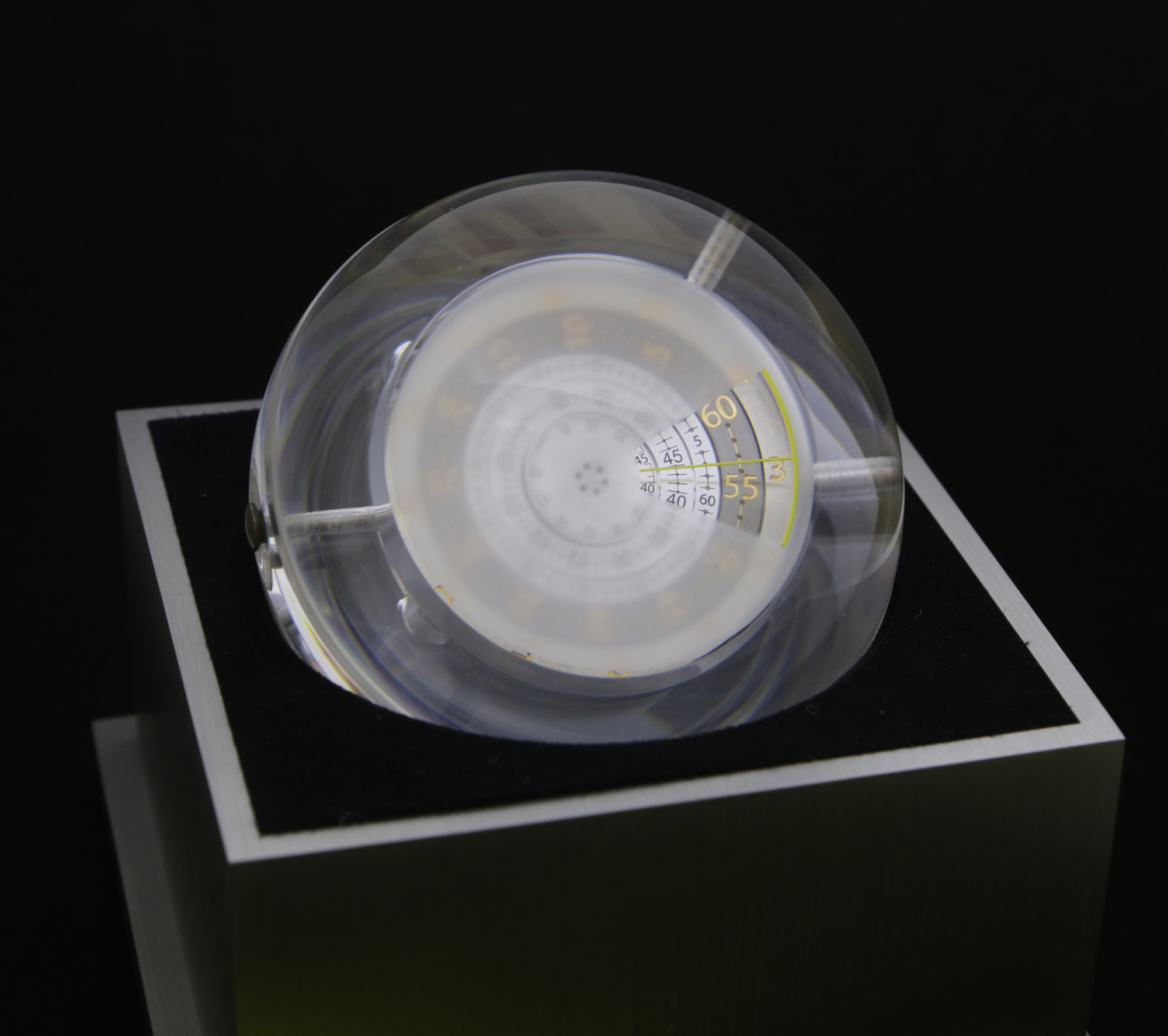 The sphere consists of three parts, made from Plexiglas, and houses the movement in its centre. There is no case, and the Plexiglas further amplifies the view of the movement, acting as a magnifying glass making it appear 1.6 times larger than its actual size. This gives a complete unprecedented view of the movement down to the most intimate detail without any mediation – making it a watchmaking first. The words “Carpe Diem” – “Agenhor – HEAD Genève”, “Only Watch 2017” and “Pièce Unique” (‘unique piece’) are engraved on the barrel bridge. The same engravings feature on the edge of the hour ring, rotating with the passing hours and visible through the transparent section of the sphere. The time is displayed on the five rotating discs, which can be viewed through the sphere's transparent section, whilst the rest is concealed by the sand-blasted outer finish. Two windows located on the top and bottom of the case allow hour markers to be read on one side and the movement to be observed from the other end, without opening the case. 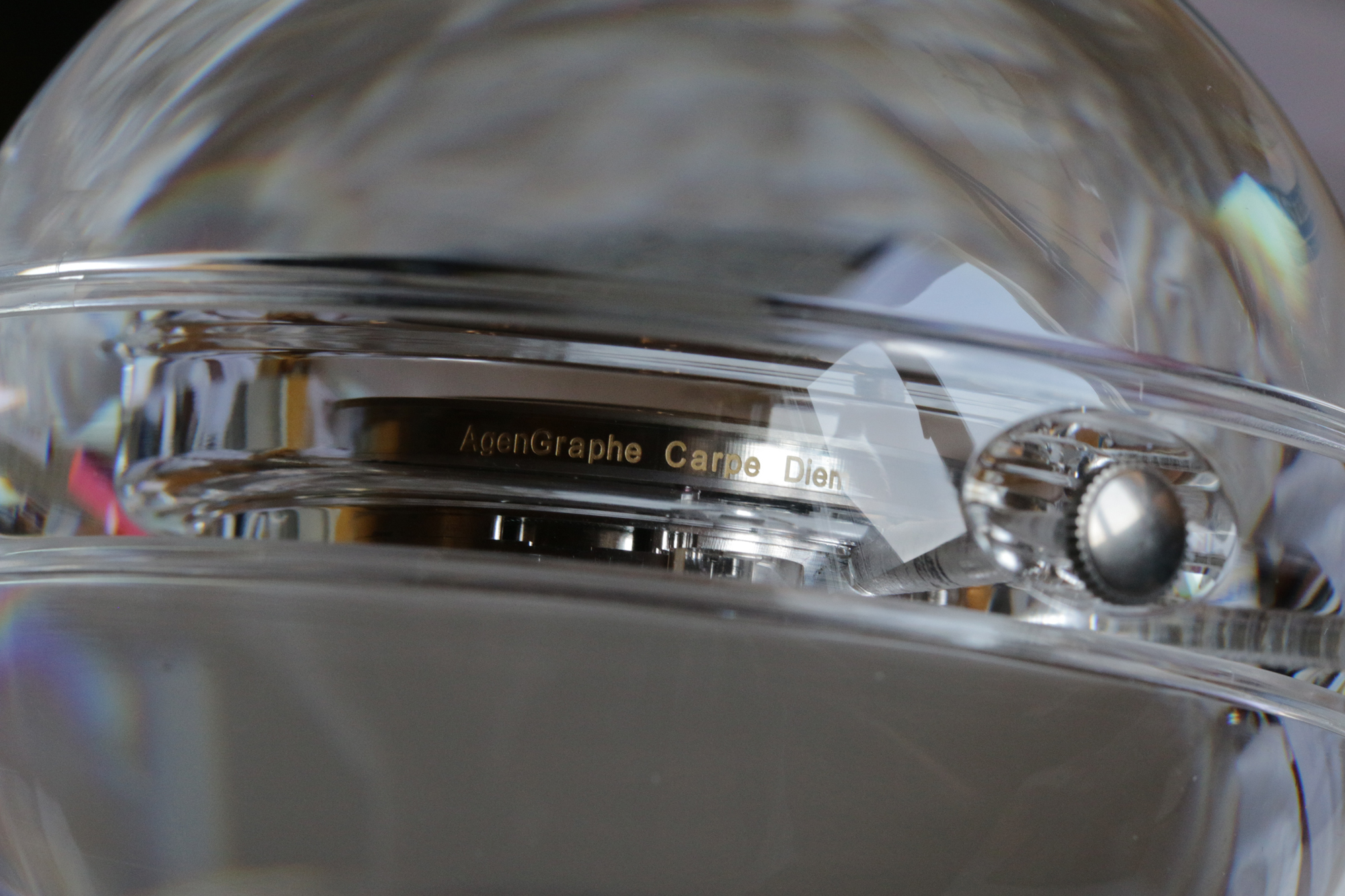