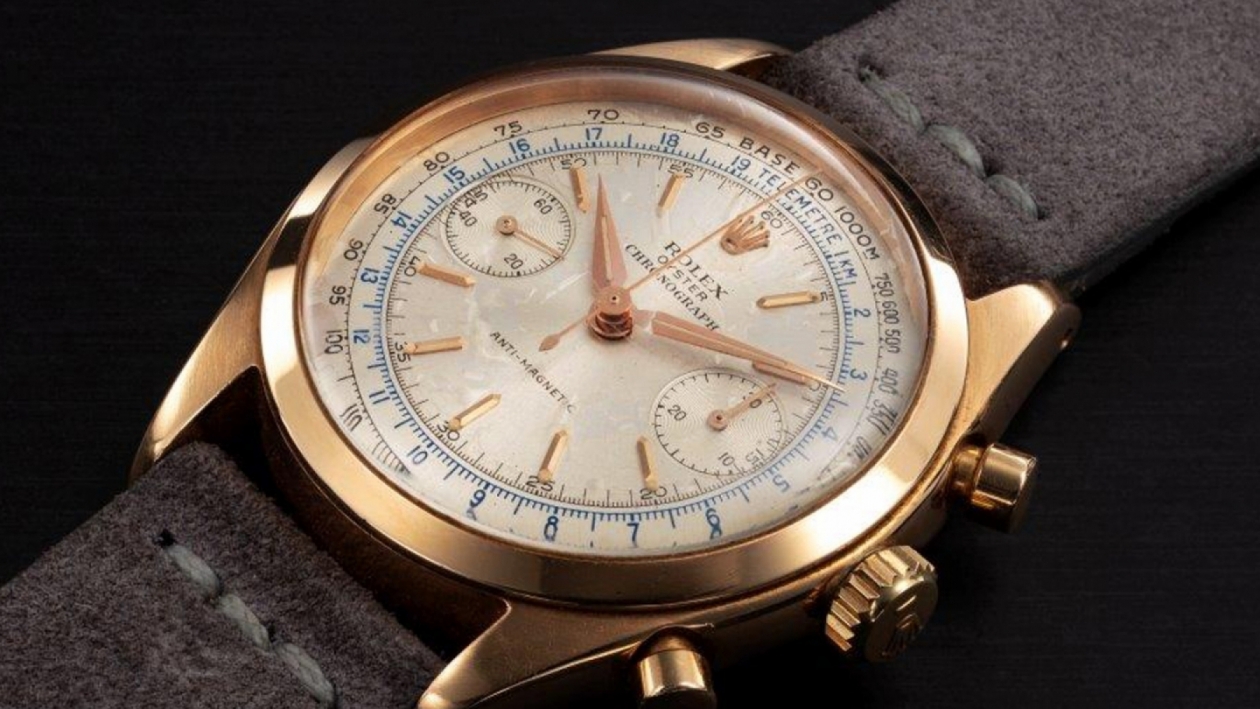 A look at five timepieces that cover the gamut from utterly complex to extremely rare, and are on offer this auction season

It’s easy to slot complications in mechanical watchmaking. If the GMT function or world time complication is the most practical and used function in the 21st century, the moonphase is the most poetic. The tourbillon has always been more about a brand flexing its horological biceps than it serving any practical function in modern watchmaking. However, it’s the chronograph function that has consistently enthralled collectors and enthusiasts alike over the decades.

Over the past 100 years, the chronograph has been used to measure everything from the enemy’s artillery position during the great wars (telemeter scale) and a patient’s heart rate (the pulsometer scale) in the 1930s, to lap timings around the Daytona circuit (the tachymeter scale) in the 1960s. The crew of NASA’s Apollo 13 mission used a Speedmaster to time a 14-second engine burn to align themselves for re-entry into earth in 1970. While in the age of the smartwatch, a chronograph is probably used more to time how long a burger patty needs to stay on the grill during a weekend barbecue, it is safe to say that the complication’s appeal has endured.

And with that, I shall segue quickly to five outstanding chronographs that run the gamut from utterly complex to extremely rare. More importantly, these watches are being offered at Christie’s Watches Online: The Dubai Edit, which runs from October 13 to 27.

An extremely rare timepiece, this 18K pink gold manual-winding chronograph was produced in 1958 and is one of Rolex’s rarest chronograph models. Made for the French market, it is believed to have been created in an exceedingly small series of only 12 examples.

This watch has a silvered sunburst dial with a blue telemeter scale and has a charming champagne-tone patina that has formed naturally. The varnish, a layer of clear lacquer applied to the dial surface to protect it against external influences, is flaking off in places, most probably due to various atmospheric effects. Fewer than five examples of this ultra-rare Rolex reference have surfaced in the market in the past five decades.

The reference 5070 is a historically significant timepiece for the Geneva brand. It was the first basic manually wound chronograph produced in series by the brand since the venerable Ref. 1463 was discontinued in the 1960s. Introduced in 1998, the Ref. 5070, with a 42mm case, was enormous (by Patek standards) and was inspired by a split-seconds chronograph Ref. 2512 that the brand made in the 1950s.

Powered by the legendary Lemania-based Cal. CH 27-70 movement, it was initially produced in yellow gold. It was also made in white and pink gold before the platinum version was introduced in 2008 to mark the model’s 10th anniversary. The platinum version was only produced for a year, making it the rarest of the lot. Patek Philippe replaced the 5070 with the Ref. 5170 in 2010. A double-sealed example of the Ref. 5070P is being offered in our Dubai sale—that’s the closest you are going to get to travelling back in time to 2008 to buy a mint example of this chronograph.

Between 1998 and 2008, Cartier produced a series of mechanical watches in the Collection Privée Cartier Paris (CPCP) line inspired by historic designs, but powered by mechanical movements.

A hallmark of this collection was that the French brand turned to a bunch of specialist movement makers for technical assistance. One of the firms it worked with was Techniques Horlogères Appliquées (THA), the movement maker helmed by François-Paul Journe, Denis Flageollet, and Vianney Halter. These three watchmakers would go on to become veritable stars in the indie watchmaking firmament, but the movement they made for Cartier—the Calibre 045 MC—would power two exemplary monopusher chronographs: The Tortue Monopoussoir and the Tank Monopoussoir.

Now that Journe’s eponymous brand has become one of the biggest names in independent watchmaking, collectors have made a beeline for his earlier work. To borrow an analogy from music, this is what the Temple of the Dog’s self-titled album means for Soundgarden and Pearl Jam fans. We have seen demand for these monopusher chronographs rise steadily in the past 18 months and this October, Christie’s will offer a white gold square Tank Monopoussoir from 2008 in its Dubai sale.

In 2004, the Teutonic watchmaker launched the Double Split, the world’s first chronograph with a double rattrapante mechanism. A mechanical split-seconds (rattrapante) chronograph is a complex enough creation mastered by few watchmaking brands, but the Double Split was a major flex from
A. Lange & Söhne.

In the Double Split, the chronograph minutes could be split as well to time two simultaneous events up to 30 minutes as opposed to conventional rattrapante mechanisms that could only measure times of up to 60 seconds.

Powered by an exquisitely hand-finished Cal. L001.1, the Double Split remains one of the most complex chronograph timepieces ever made in modern history. The Dubai sale features an example in platinum, complete with an extract from the manufactory confirming its authenticity.

Among the rarest vintage Daytona references, the ‘Solo’ is a reference to the fact that the dial only carries the legend ‘Rolex’ and not the usual description ‘Oyster Chronograph’ seen on the
Ref. 6240 models.

The Reference 6240 was the first waterproof Daytona and featured an acrylic bezel and screw-down chronograph pushers. While nobody really knows why these ‘Solo’ dials exist, in the absence of Rolex providing any information about their existence, experts and traders have speculated that a small number of early Ref. 6240 models (in the serial number range of 1.2 million to 1.4 million) were fitted with these dials. There are also Ref. 6239 models (the first Daytona reference and launched before the 6240) that were fitted with Solo dials leading to theories that these dials were used in the interim period when Rolex had not decided on a standard dial designation for the Daytona models.

The second generation of Ref. 6240 models featured the Oyster denomination on the dial. The Ref. 6240 is a rare reference; it was quickly replaced in the lineup by Ref. 6263 and 6265. So, for vintage Rolex enthusiasts, the possibility of owning a ‘Solo’ Daytona is indeed an exciting prospect. The Dubai auction will present a steel Ref. 6240 from 1996, complete with the original Mk 0 chronograph pushers.