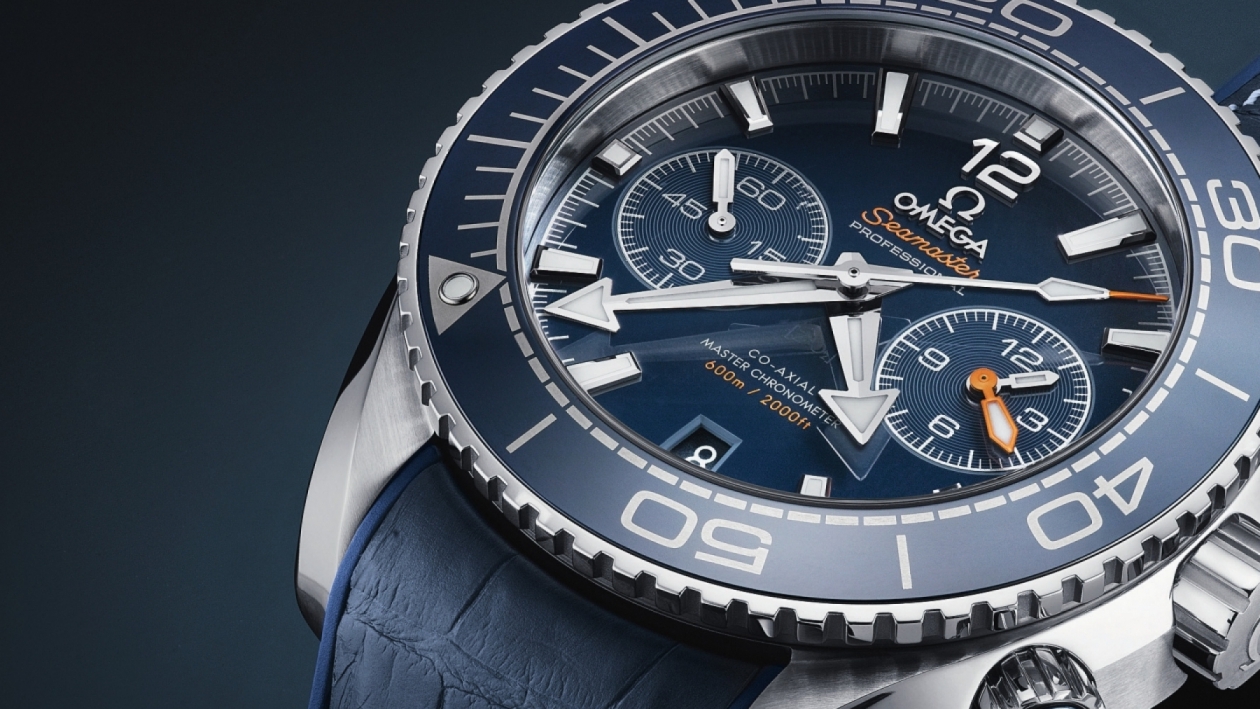 The new Seamaster Planet Ocean Chronograph continues Omega’s maritime legacy. It’s also the brand’s first chronograph to earn certification as a Master Chronometer. We present it here in our exclusive review. BY MARTINA RICHTER PHOTOS BY OK-PHOTOGRAPHY AND OMEGA

In 2015, the Swiss Institute of Metrology (METAS) certified the Omega Globemaster as the first “Master Chronometer.” Since then, Omega’s goal has been to submit the majority of its mechanical movements for METAS certification by 2020. This is an ambitious project: each movement must pass the eight tests of the METAS ordeal, which defines a new standard for precision, accuracy of rate, and resistance to magnetic fields. Unlike our test of the Globemaster, this time we decided not to put the watch through its paces inside a magnetic resonance scanner. Instead, we simply assumed that Calibre 9900, like the Globemaster’s Calibre 8900 before it, could resist a magnetic fi eld with an intensity of 1.5 teslas. The 8900 we tested remained unaffected by nearly 7.0 teslas of magnetism. Like the 8900, chronograph Calibre 9900 has a coaxial escapement, a titanium balance and a silicon balance spring. However, Calibre 9900 is paced at 4 Hz, which makes it a “fast oscillator.” 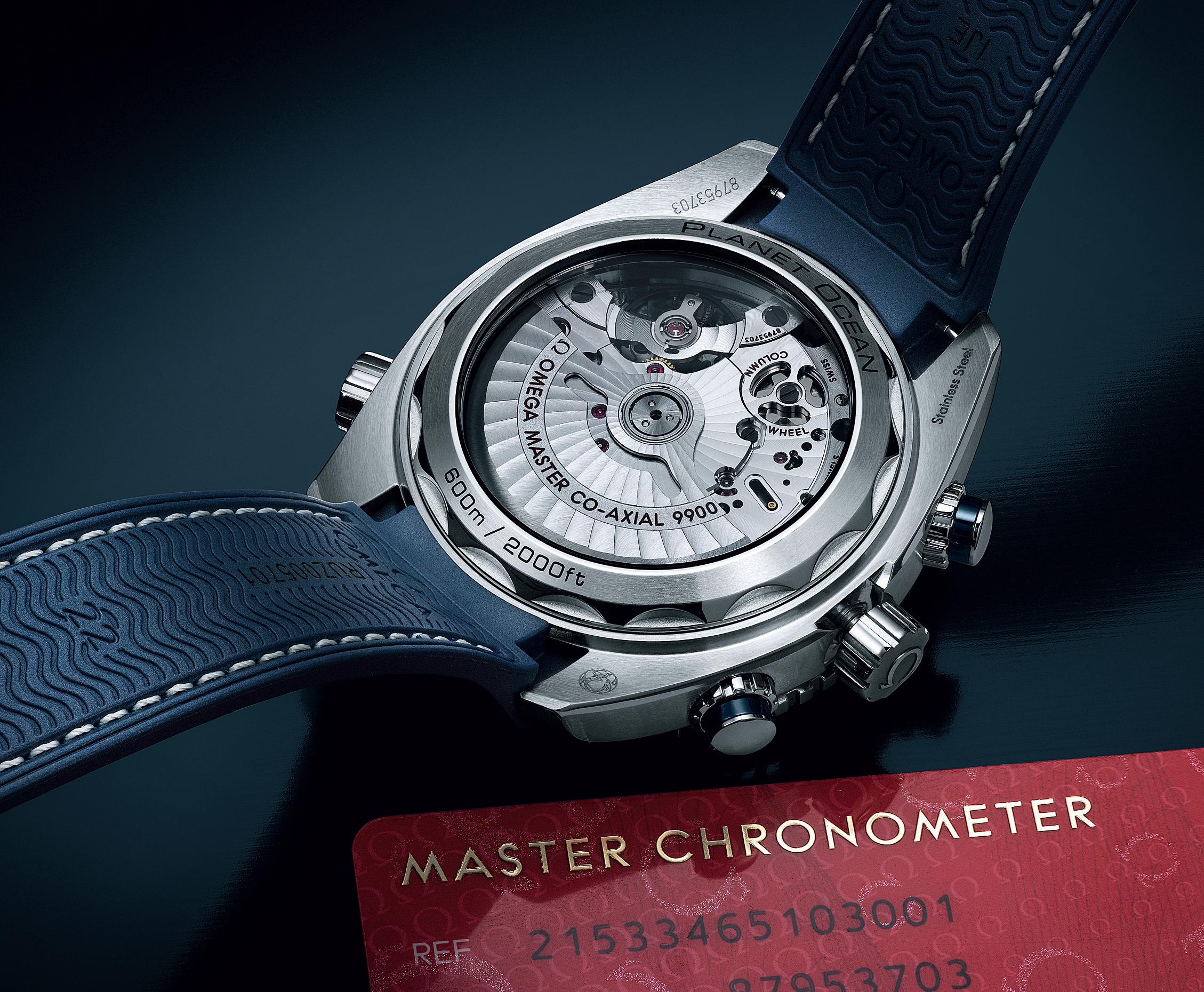 The Master-Co-Axial Calibre 9900 is paced at 4 Hz and stores energy in two barrels for a 60-hour power reserve.

The new calibre’s rate behaviour proved to be very similar to that of the 8900. The timing machine showed an average daily gain of slightly less than 5 seconds. The calibre reliably continued to keep time with this slight gain under all conditions, i.e., when fully wound and after having been allowed to run for 24 hours without intervening winding and with the chronograph switched on. The Seamaster Planet Ocean performed even more accurately on the wrist, where it gained only slightly less than 3 seconds per day. Noteworthy are the slight differences between the individual positions and the stability of the amplitudes, whether or not the chronograph is running. This means you can leave the chronograph running for a long period of time without concern. And when you do, you’ll also benefit from another feature of Calibre 9900: the elapsed minutes

"The time-zone function simultaneously serves as a rapid-reset mechanism for the date. Calibre 9900 relies on two serially switched barrels to amass a 60-hour power reserve."

and hours are shown like a second time of day on the counter at 3 o’clock. A quick glance at ordinary clock face is all it takes to intuitively read the subdial and know how long the chronograph has been running. And with a bit of foresight, you can use this display for a second time zone, for example, to keep showing the time in your home time zone on this subdial while you travel to the other side of the globe. The time-zone function makes it easy to set the local time at your destination. After you have pulled the crown out to the middle position, you can reposition the hour hand in hourly increments either forward or backward without influencing the positions of the other indicators, i.e., the minutes hand, the seconds hand and the chronograph’s elapsed-time display. The date at 6 o’clock also remains unaffected, although it switches in synchrony with the hour hand. And it does so when you leave and when you return home, switching both clockwise and counterclockwise. The time-zone function simultaneously serves as a rapid-reset mechanism for the date. Calibre 9900 relies on two serially switched barrels to amass a 60-hour power reserve. When you look through the sapphire crystal in the back of the case, you can not only see the barrels but also identify them, thanks to engravings on the bridge that’s screwed in place above the barrels. A similar engraving identifies the six-pillar column wheel, which you can see through an opening in its bridge. The screwed caseback, which Omega describes as “alveol,” is part of the redesign of the Planet Ocean, which was first launched in 2005. The brand’s reference to a lung’s tiny air sacs could perhaps allude to the distinctive knurling along the rim of the back of the bezel, which is engraved with the name of the model and its water resistance. Or perhaps Omega is using “alveol” to refer to the tiny bubbles of gas that could penetrate into the case through the unscrewed helium valve under conditions that prevail in a pressurised chamber. 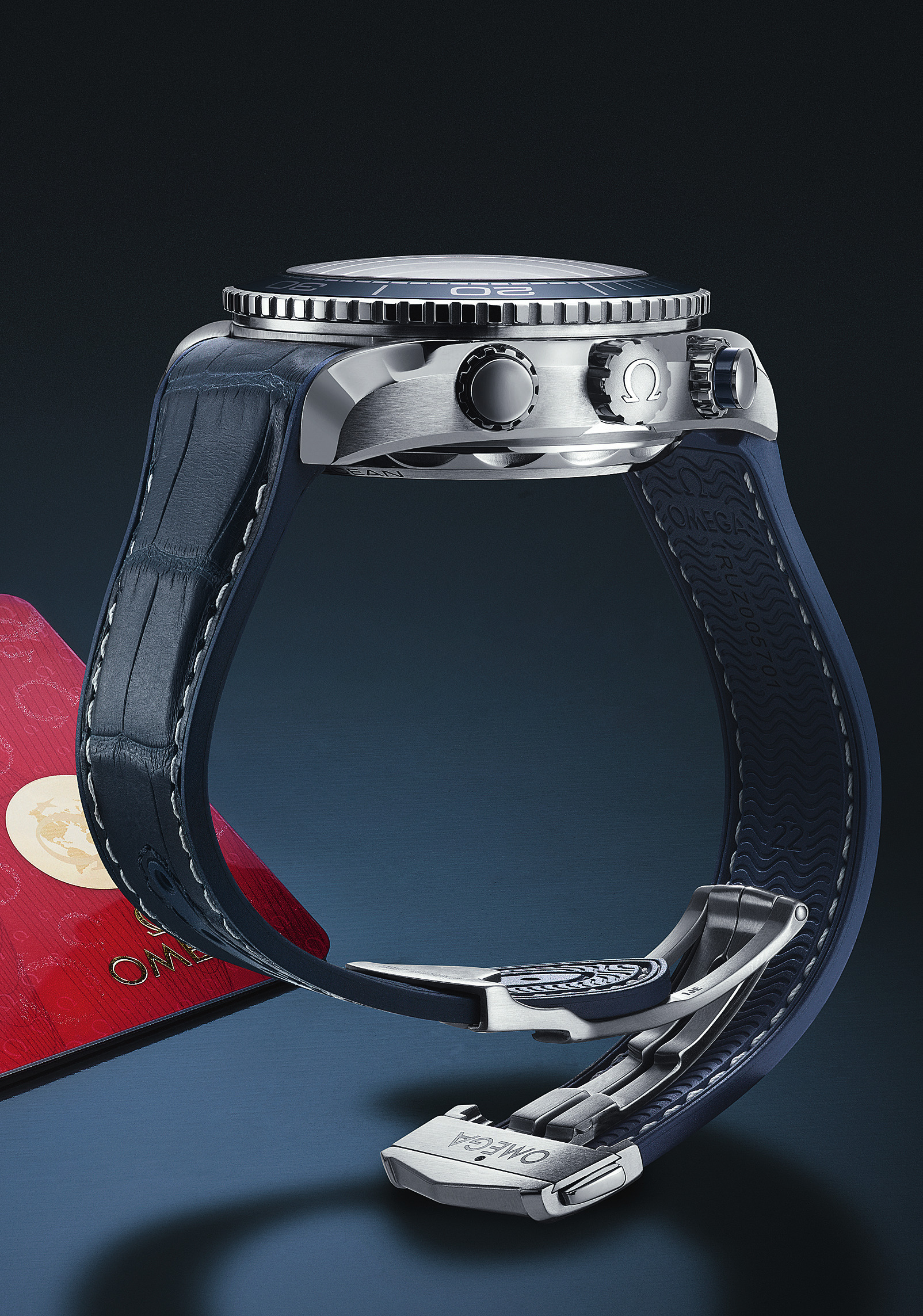 Wearing comfort is assured by the fluid transition between the case and the rubber-lined leather strap, which is secured by a folding clasp.

Be that as it may, the helium-release valve and the high resistance to pressure (up to 600 metres) are not the only features that enable the Planet Ocean to continue its legacy as a professional divers’ watch. The watch is also extremely legible in this new, handsome, blue version, which honours its maritime heritage. The distinctive faceted hands contrast well with the high-gloss polished blue ceramic background. The hands and the applied hour markings dominate the dial. In the dark, the minutes hand and the orientation dot at the 12 (which are both critically important when diving), glow green, while the hour indexes and all other hands shine blue. This means that the chronograph can also be used in the dark and under water. For ease of operation during underwater stop-time missions, the two push-pieces are not screwed, unlike the crown, which is self-arresting and positioned inside a crown tube to guarantee extreme water resistance. The crown’s large size and deep grooves, combined with a convenient notch in the middle part of the case, ensure that the user can easily grasp the crown to unscrew it and pull it out into its several positions. The chronograph’s pushers, the helium release valve and the rotatable divers’ bezel also operate securely. 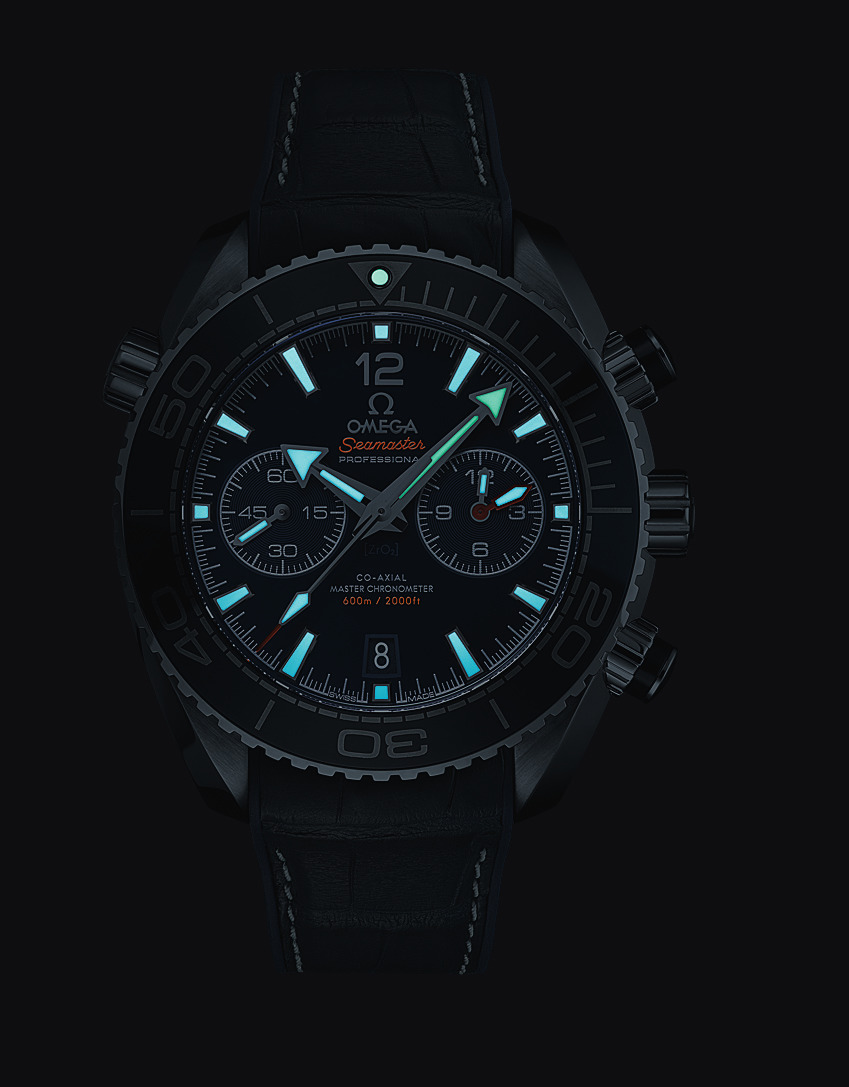 Bold hands and indexes, plus good illumination, guarantee that the Seamaster Planet Ocean is always legible.

The dial and the rotating bezel are made of blue ceramic. The calibrations on the bezel are highlighted with a liquid metal alloy that is significantly harder than stainless steel yet is able to fuse seamlessly with the ceramic. Indeed, when you run your fingertips along the bezel, you cannot feel any difference between the applied markings and their ceramic substrate. Everything looks and feels totally unified and smooth. Furthermore, the combined materials resist scratches and corrosion. The zirconium oxide that is used here (and is also used in dental and automotive applications), offers a high degree of thermal insulation while preventing microscopic tears from lengthening or widening. Despite its large size, the Seamaster Planet Ocean fits surprisingly well on the wrist. The water-resistant leather strap is lined with rubber and assures a good fit. The strap not only transitions seamlessly into the lugs on the middle part of the case, it also slopes downward for a snug fit. The other end of the strap is secured by a pressure-activated clasp, which folds on one side. The free end of the strap runs through lateral guides and is affixed by a tongue in the buckle. The sole drawback: one searches in vain for a divers’ extension. This means that the Seamaster Planet Ocean might not fit over the sleeve of a neoprene diving suit. The watch also refuses to be crowded under the cuff of a dress shirt, although it has everything it needs to be an elegant companion in daily life on dry land. 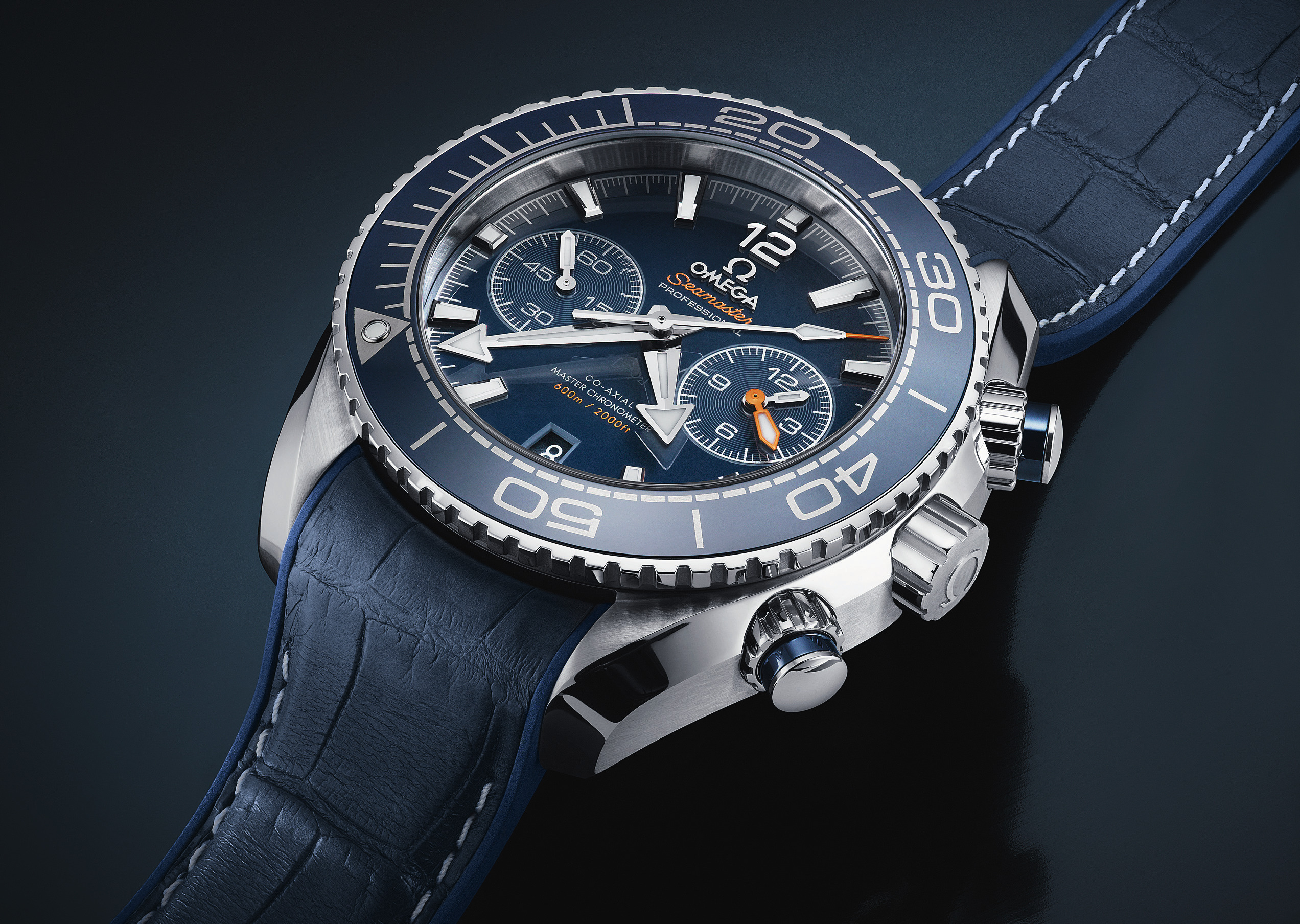 Strap and clasp: Leather with rubber on the inside, one-sided folding clasp

Deviations in seconds per 24 hours (Fully wound / after 24 hours)