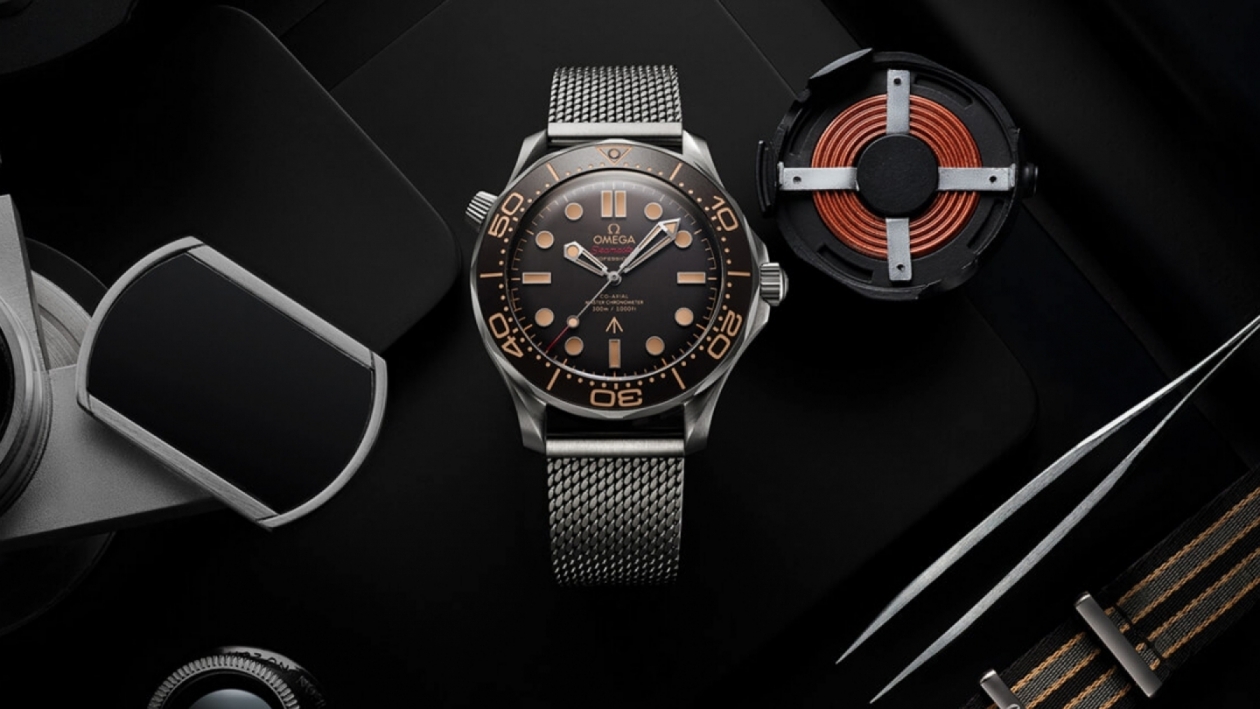 Partnership between and a movie and a watch is not news anymore. From James Bond to Godzilla, there are a few watches that have been specifically created for the movies. Today we bring you a list of the ones that have made an impact.

Many watches have appeared in movies, and some have become nearly as famous as the stars who wore them. But only a handful of watches have been created specially for movies, in partnership with the filmmakers themselves. Here is a rundown:

Omega has been outfitting cinematic superspy James Bond since 1995’s Goldeneye,and the latest timepiece worn by Agent 007, in No Time to Die, was conceived with the input of the film’s star, Daniel Craig. Designed in the style of the original Seamaster Diver 300M, which debuted in 1993, the watch has a 42-mm titanium case with an aluminium rotating bezel ring and a helium-release valve at 10 o’clock. Both the dial and bezel ring are executed in a “tropical” brown hue for a vintage look; the arrow marker above 6 o’clock on the dial is a reference to a style of military watch that Bond (a Navy man) would prefer. Inside is Omega’s master Chronometer Caliber 8806, and the watch is offered on an adjustable titanium mesh bracelet or a striped NATO strap.

A longtime provider of watches to filmmakers — for movies like 2001, Men in Black,and Interstellar, to name just a few — Hamilton collaborated closely with the production design team for Christopher Nolan’s sci-fi opus TENET on a custom-made watch for use in filming. The commercially available version of that specially produced prop piece is housed in a 46-mm, black-PVD titanium case, with a black dial hosting either a blue- or red-tipped seconds hand, referencing key colours in the movie. Each colour version is limited to 888 pieces, a number chosen to reflect the palindromic nature of the film’s title. Equipped with Hamilton’s proprietary H-10 automatic movement, which boasts an 80-hour power reserve, and mounted on a black rubber strap with a black-PVD pin buckle, the 1,000-meter water-resistant watch comes in special packaging created by TENET production designer Nathan Crowley.

In the classic 1954 Godzilla film, the Wako clock tower of Seiko’s historic Tokyo store is demolished during the rampage of the titular giant monster. To commemorate the 65th anniversary of the film, Grand Seiko, the luxury watchmaker that sprung from the original Seiko brand, released this 44.5-mm, titanium-cased watch that features several references to Japan’s famous movie monster: the crimson dial with its radiating waves is designed to echo the look of Godzilla’s fiery red heat-ray breath, and the sharkskin strap, with its applied black and red areas, has been given a rough texture inspired by the creature’s dinosaur hide. The Spring Drive movement ticks behind an exhibition caseback inscribed with a rendering of Godzilla destroying Seiko’s clock tower in the Ginza — which, like Godzilla himself, endures as an icon of the city of Tokyo.

Jaeger-LeCoultre partnered with online retailer Mr. Porter to produce this limited-edition watch tying in with the release of the Kingsman sequel, The King’s Man. For the movie, which explores the origins of the fictional Kingsman spy agency, Jaeger-LeCoultre has reinterpreted its “couteau,” a 1907 pocketwatch,as a refined ultra-thin dress watch. The timepiece has a rose-gold 40-mm case, just 4.25-mm thick, with a broad bezel that slopes gently towards the edge of the case to create a profile reminiscent of a knife blade. The crown is protected by a triangular bow and placed at 12 o’clock in the style of a pocketwatch. The ivory dial has simple index hour markers, a railroad minute marker on the edge, and slender, blued steel hands. Inside is the hand-wound Caliber 849, an ultra-thin movement (1.85 mm) that the manufacture first introduced in 1994, with a power reserve of 35 hours. The caseback is engraved with the Kingsman logo, and the limited edition number out of 100 total pieces.

Japan’s Citizen Watch Co. continued its partnership with Marvel Studios with the release of this Eco-Drive-powered watch that references the blockbuster film Avengers: Endgame, and the (spoiler alert!) dramatic death of one of its headlining heroes, Tony Stark, played by Robert Downey, Jr. The dial recreates the Stark Mark I reactor that played a major role in the film series and uses the iconic helmet of Stark’s alter ego, Iron Man, as its 12 o’clock marker. The inscription, “Proof that Tony Stark Has a Heart,” a reference to a poignant scene in Endgame, is etched around the inner dial ring, while a Tony Stark signature and the “Avengers: Endgame” logo are engraved on the solid caseback. Prices are INR 26,239 for the version in a black ion-plated case and bracelet, and INR 37,110 for the limited-edition model (1,500 pieces) in rose-gold-plated steel. 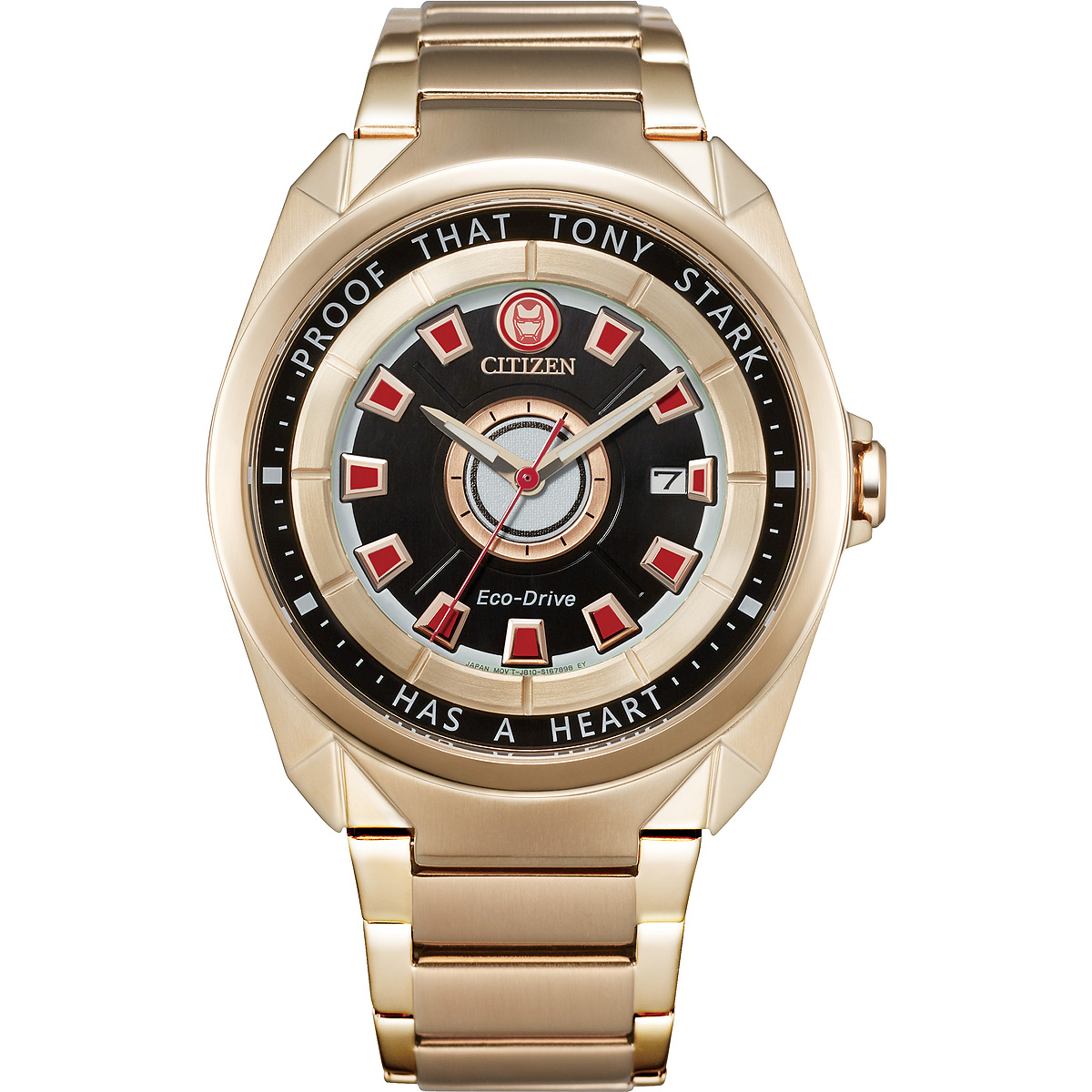