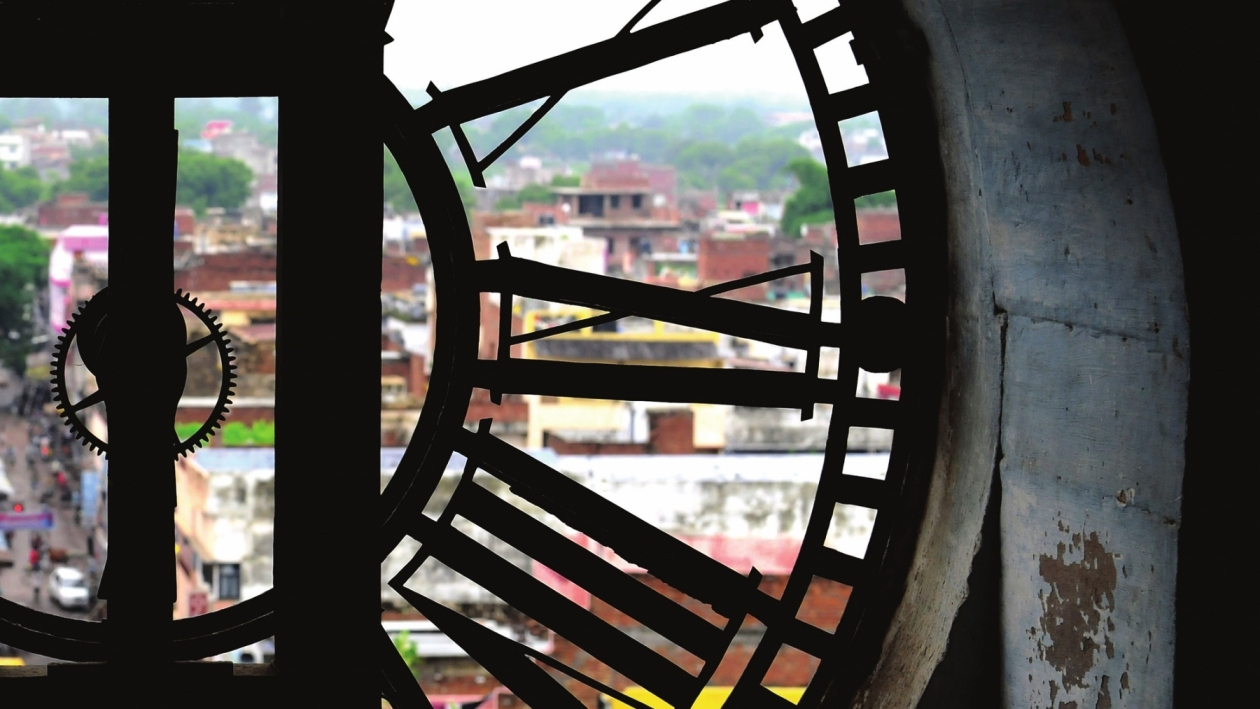 A Time To Tell

The tale of the Indian Standard Time and the northeastern demand for a second time zone.

India prides itself as a country of immense diversity. With an east-west spread of around 2,000 kilometres on the main- land, this also translates into a diversity of time—the actual time difference between India’s western and eastern extremity is two hours. But, India also prides itself as a country of unity in diversity. Time is the unifier here. The Indian Standard Time (IST), which is 5.30 hours ahead of the Greenwich Mean Time (GMT), applies across the vast swathe of the landmass. Unlike many other countries that have expansive east-west spreads, and which therefore divide the country into different time zones, India has always preferred the One Nation One Time approach, just like its neighbour, China.

The westernmost point in India is at Gugariyana, in the Rann of Kutch in Gujarat, at the longitude 68.5 degrees E. The eastern extremity is at a place in Arunachal Pradesh called Kibithu (97.4 degrees E). Time difference across different points on the earth’s surface is calculated as four minutes for every degree of longitude, or meridian. (The world is divided into 24 time zones, each 15 degrees wide and covering an hour. Each zone’s Standard Time is based in the central meridian in the zone). India’s standard time is derived from the coordinate 82.5-degree E longitude, in Mirzapur, a town near Allahabad.

"This is not the first such study. Once, in the 1980s, there had been a proposal of a binary time for the country, on the lines of what the British once had in India."

The standardised time is convenient for most of the mainland, and frequent travellers across the country don’t even marvel at daybreak happening a little earlier in Kolkata than in Mumbai. However, in the distant northeast, the one-hour lag between local time and the IST is not so convenient. The sun rises at a godforsaken early hour there, and while it’s still early evening according to the IST, it is dark enough to be night there, which it actually is, as per local time.

Body clocks are set to a circadian rhythm, which is a 24-hour cycle of physiological processes. This rhythm is affected by external factors like sun- light. There is a particular time for certain physiological processes, which is tuned with the local time. For instance, the production of the hormone melatonin happens at night, when the body is at rest. Disruption in melatonin production is linked with higher incidence of cancer. Indeed, cancer specialists say that disruption of the circadian rhythm itself is potentially carcinogenic. In 2008, the Dutch government paid compensation to several women who developed breast cancer because of long years of night shifts. These included air hostesses and nurses who had no family history of the disease and no other exposure to carcinogens. Production of melatonin requires two conditions— the body should be at rest, and there should be no light-related disruptions.

There is enough scientific justification in the demand for a separate time zone for the northeast, which representatives from the region periodically make. The most recent champion of an eastern time zone is Arunachal Pradesh Chief Minister Pema Khandu. In the past, then chief minister of Assam Tarun Gogoi had put forward the same request. Assamese filmmaker Jahnu Barua has been working on the same demand for around three decades. “Forcing people of the region to comply with a time that is not the same as the local time has wreaked havoc with their body clocks. For decades, they have been waking, sleeping, eating and working at the wrong time,” he says. The champions of this movement say that low productivity in the northeast is all a matter of wrong timing, so to say. Barua, in fact, has some radical suggestions. He says that the IST should be advanced by half an hour and that a separate time zone be created for the northeast, which is one and half hours ahead of the present IST. “It is all about daylight saving. People across India will be more active if their day begins with the crack of dawn, and they still have time left for recreation after the working day, while there is still some natural light,’’ he says. He cites the example of Singapore, where the local time is an hour ahead of the standard time (technically Singapore is seven hours ahead of the Greenwich Mean Time, but the local time is fixed as eight hours ahead. The reasons for this is complicated; it is more to do with politics and convenience than science. The point that Barua stresses on, however, is that it is possible to advance the time, if it benefits the country).

The Centre, thus far, has shown little inclination to tamper with conventional time. The ministry of science and technology is conducting a scientific study on the energy saving that could be possible with a binary time zone. “We began the study last year, and should be ready with the results shortly,” said Ashutosh Sharma, secretary, department of science and technology. “However, we are only looking at the scientific aspect, not the practical issues. If ever there is a decision to have two time zones, the government will consider other factors like the confusion that two times may create, especially with travels and timetables. The energy saving gains should offset the other inconveniences.”

"The issue here is that there are no monetary gains, no kickbacks to be had from initiating a time change. If it was about constructing a dam, there’d be contracts, and money changing hands. This move is only about public welfare without personal profit, so who will initiate it?" Jahnu Barua Assamese Filmmaker

This is not the first such study. Once, in the 1980s, there had been a proposal of a binary time for the country, on the lines of what the British once had in India. That proposal was rejected. Then, in 2001, when the demand popped up again, the ministry of science and technology even set up a committee to examine the need for more time zones, as well as daylight saving. The committee submitted its report in 2004, finding not enough reason to move from the existing one-time approach. Its main argument was that the east-west expanse of the country was not that vast to merit multiple or even binary time zones. The same British Raj, which chose longitude 82.5 E as the Indian Standard Time, once had separate time zones in India. Precursors to the IST were the Bombay Time and Calcutta Time, which were allocated to India at the 1884 International Meridian Conference in Washington DC. Calcutta time was set as 5 hours 54 minutes ahead of GMT and Bombay Time at 4 hours 51 minutes ahead of GMT. These were the two prominent Presidencies of the Raj. In those days, the railways were the great connector. Rail links crisscrossed the subcontinent, connecting Lahore in the west to Calcutta in the east. The railways always preferred to have one time to set its clocks by and it popularised the Railway Time, which was midway between Bombay and Calcutta Time. It chose the coordinates of Madras, the third Presidency, as Railway Time. Madras Time was set up by John Goldingham in 1802 itself, and was, much later, adopted by the Railways. The Madras Observatory clock was directly attached to a gun and tuned such that every evening at 8 pm, the gun fired. You could correct your watches with the report of the gun. During British Rule, there was another time, but it didn’t become very popular. This was the Port Blair Time, which was 49 minutes ahead of Madras Time. Despite the binary time that the International Meridian Conference had allocated the Indian subcontinent, the demand seemed to be for a standardised, one time. In 1905, the British Raj formalised Madras Time as IST. Madras is on the 80 degree E longitude; the IST was moved to the 82.5 Degree E longitude, making it more central. The same longitude keeps time for Sri Lanka, too.

Habits are not easy to change. Calcutta maintained its time zone till 1948 and Bombay till 1955. And, the Chaibagaan time is still observed in tea estates in Assam. This time is an hour ahead of the IST and was introduced by the British (who also preferred a single time for the country) to optimise work in tea gardens. Tea picking is best done in the early morning hours, so it makes sense to turn the hands of the clock to suit local time in this case. Chaibagaan time, however, is not used in government offices and other establishments, and this, say observers, means that the east ends up wasting more electricity, especially since India has been resolutely against daylight saving time, too. “This is the simple solution that the eastern states can adopt,” said Sharma. “They can advance timings by an hour. Schools, offices and establishments can all open and shut earlier, that way the locals can maximise daylight, energy can be saved and the confusion of a binary time zone can be avoided. But, that is a decision state governments should take.” The northeastern states periodically threaten to revert to Chaibagaan time officially, but nothing has ever come of it. “The issue here is that there are no monetary gains, no kickbacks to be had from initiating a time change. If it was about constructing a dam, there’d be contracts, and money changing hands. This move is only about public welfare without personal profit, so who will initiate it?” asks Barua. The British were not the first to standardise time in India. The Surya Siddhanta is a text on Indian astronomy and, though it was written in medieval times (most say the sixth century), it quotes earlier shlokas, which researchers say could date back to 700BC. Astronomers in ancient India had already established the earth was spherical; they had also established that local time changed with distance, and so they chose Avanti as the coordinate for the zero meridian. Avanti today is Ujjain, a place of pilgrimage in Madhya Pradesh. The same zero coordinate also passes through Rohitaka, modern day Rohtak in Haryana. In Indian astronomy, the day does not begin with the stroke of 12, it begins with the crack of dawn. In Vedic timekeeping, the smallest unit is the Parmanu (17 microseconds) and the largest the Mahamanvantara (311.04 trillion years). The calibration was living, yet exact. Sample this—one prana is equivalent to 4 seconds of modern timekeeping, exactly the time for an average respiratory cycle. A nimish is the time taken for the eyelid to bat once. It is rather unfortunate that time in modern day India is only known for one characteristic, its stretchability. The Indian Stretchable Time is no virtue.