The sixth Handwerkskunst edition from the Glashütte brand known for its lavish nishing combines some top tier Métiers d’Art with real technical ingenuity. We asked Lange’s Anthony de Haas to give us the lowdown on the new model. By Nitin Nair.

In the 25-odd years since its reestablishment as an haute horology brand, A. Lange & Söhne has done enough to showcase its artisanal skills and technical ingenuity. The brand has developed more than 50 in-house calibers and the lavishly finished, and technically proficient timepieces have

"When we launched the first model in 2011, we wanted to surpass the already high level of movement finishes by perfecting them with sophisticated decoration techniques that match the character of each individual timepiece" Anthony de Hass Director of Product Development

earned it a place in the pantheon on great watchmakers today. But if you thought the story of Lange’s artistry ends there, you haven’t heard of Handwerkskunst yet.

The Handwerkskunst collection (handwerkskunst is German for craftsmanship) represents the best of Lange’s artisanal skills. Extremely limited in production, these timepieces combine refined traditional movement design and finishing techniques with some unusual decorative methods. “The idea behind our six Handwerkskunst editions is to push the boundaries in terms of craftsmanship. When we launched the first model in 2011, we wanted to surpass the already high level of movement finishes by perfecting them with sophisticated decoration techniques that match the character of each individual timepiece,” says Anthony de Haas, director of product development at the brand.

Haas says the candidates for the Handwerkskunst treatment are chosen from the brand’s range of horological complications because they offer a creative playground for the application of all the extravagant finish and engraving techniques that the brand has developed over the years. These models are created in a cross-departmental co-operation by the most skilled and experienced finishers, engravers and watchmakers at the manufactory. For the sixth Handwerkskunst edition unveiled on September 16, 2017, the brand has turned its attention to a watch that created a stir when it was first unveiled at SIHH 2013 – the 1815 Rattrapante Perpetual Calendar, a watch that combines two classical complications – a split-seconds chronograph and a perpetual calendar – that are among the most technically challenging in watchmaking today. When first launched in 2013, it won the Grand Prix d’Horlogerie de Genève (GPHG) prize for best Grand Com- plication and also the Public’s Choice Award that year.

And what happens when a complicated timepiece like this gets the Handwerkskunst treatment? The 1815 Rattrapante Perpetual Calendar Handwerkskunst edition sees artistic decoration of the movement, dial and case. The models in the 1815 family evoke memories of Lange’s

"This timepiece is the first Handwerkskunst edition to feature a hinged cuvette case. This is in the style of pocket watches with hunter cases – spring hinged lids that covered the dial and movement of the watch. The sapphire caseback is protected by a hinged cuvette that depicts Luna – the ancient Roman embodiment of the moon."

historic pocket watches. Consequently, one of the main characteristics of this new Handwerkskunst is a relief engraved and enameled hinged cuvettte 18k- white-gold case, which lends a very classic touch to this model.

This is the first Handwerkskunst model to combine enamel art and engraving on its dial. The solid white-gold dial features a deep-blue enamel coat beneath which appear the sculpted con- tours of the relief-engraved stars almost like a visual extension of the moon- phase display. All models in the 1815 line have Arabic numerals on the dial and here they are flush with the enamel of the dial. Rhodium-plated white-gold hands indicate the time as well as the calendar indications and are also seen on the power-reserve indicator.

The moon-phase display sits at 6 o’ clock, the blue lunar disk of the moon-phase echoes the blue of the enamel dial and is also matched by the blued-steel minute-counter hand. In stark contrast to all this blue sit the four recessed sub- dials in silvered white gold. The chronograph hands are made from gold-plated steel and the dial is framed by a silver-coloured flange ring with a traditional railway-track minutes scale.

“Each of the two techniques (enameling and engraving) is already a challenge in itself but the combination of engraving and enameling raises the level beyond measure,” says Haas. “On the dial, the combination of reliefed stars and a deep blue enameled sky visually enlarges the moonphase indication.”

This timepiece is the first Handwerkskunst edition to feature a hinged cuvette case. This is in the style of pocket watches with hunter cases – spring hinged lids that covered the dial and movement of the watch. The sapphire caseback is protected by a hinged cuvette that depicts Luna – the ancient Roman embodiment of the moon.

The Goddess – presented in relief and tremblage engraving – is seen with a billowing veil, a torch and a crescent moon diadem on her head. The medal- lion is surrounded by a raised star and cloud relief in blue enamel.

Presented in a 41.9-mm white-gold case with a thickness of 15.8 mm, this is marginally heftier than the stock ver- sion (14.7 mm) thanks to the hinged cuvette. Not exactly a shrinking violet on your wrist, but given the horological heft it carries, the size of the case is understandable.

The timepiece is powered by the Calibre L101.1, seen on the stock Rattrapante Perpetual Calendar, but the finissage on the Handwerkskunst edition is at another level. Apart from the characteristic Lange flourishes like finely chamfered edges, blued screws and gold chatons, the German-silver train bridge is finished with a granular texture seen in the movements of historic pocket watches. Relief and tremblage engravings on the operating lever, cover and chronograph bridges as well as on the rattrapante and balance cocks echo the stellar motif of the dial.

A split-seconds chronograph allows the measurement of lap times and consecutive times. It is controlled by two column wheels – one for the chronograph and one for the readily visible rattrapante mechanism which is activated by a pusher at 10 o’clock. Both the column wheels are visible through the caseback. The perpetual calendar mechanism doesn’t need correction until 2100 and the moon-phase display is calibrated to remain accurate for 122.6 years. 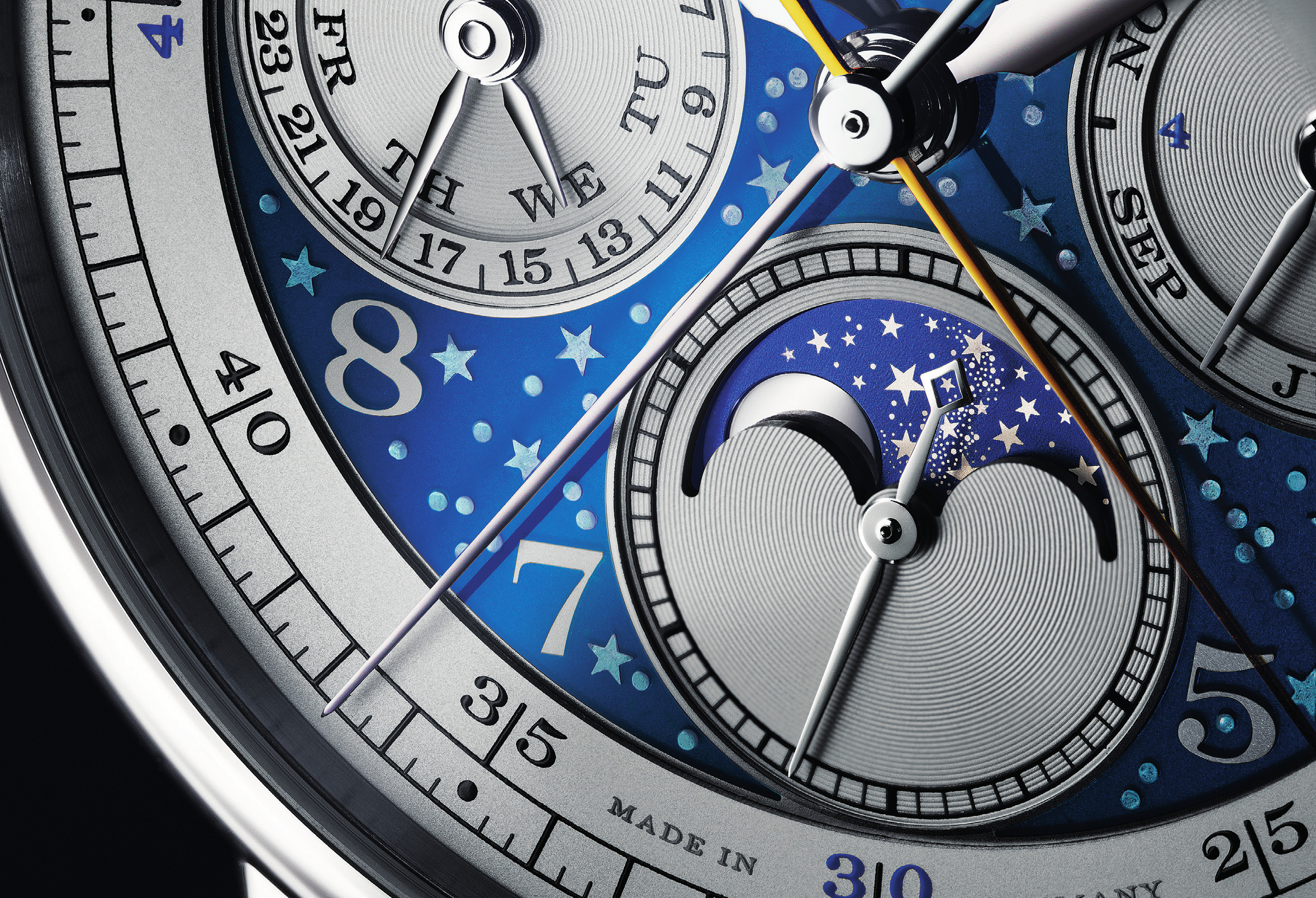 The 631-part hand-cranked movement has a power reserve of 42 hours and beats at 3 Hz (21,600 vph). Lange designs and creates its movements in house and even makes its own balance springs. With the exception of cases and dials – the maison prefers to leave these to experts – it manages everything else in house.

This watch is a limited edition of just 20 pieces and the edition number is engraved on the case. It is worn on a blue-gray alligator leather strap secured with a white-gold deployant buckle.

Lange has produced six Handwerkskunst models every year starting in 2011, but we had none in 2016. When is the next model due? “There is no annual rhythm. Any kind of time pressure would contradict the idea of uncompromising quality. The launch date is solely determined by the complexity of the respective timepiece and the different techniques,” explains Haas.

According to Haas, most customers interested in Handwerkskunst models are already familiar with Lange timepieces. He describes them as collectors and connoisseurs who appreciate supreme craftsmanship and are looking for the exclusivity of an unparalleled piece of art signed “A. Lange & Söhne. 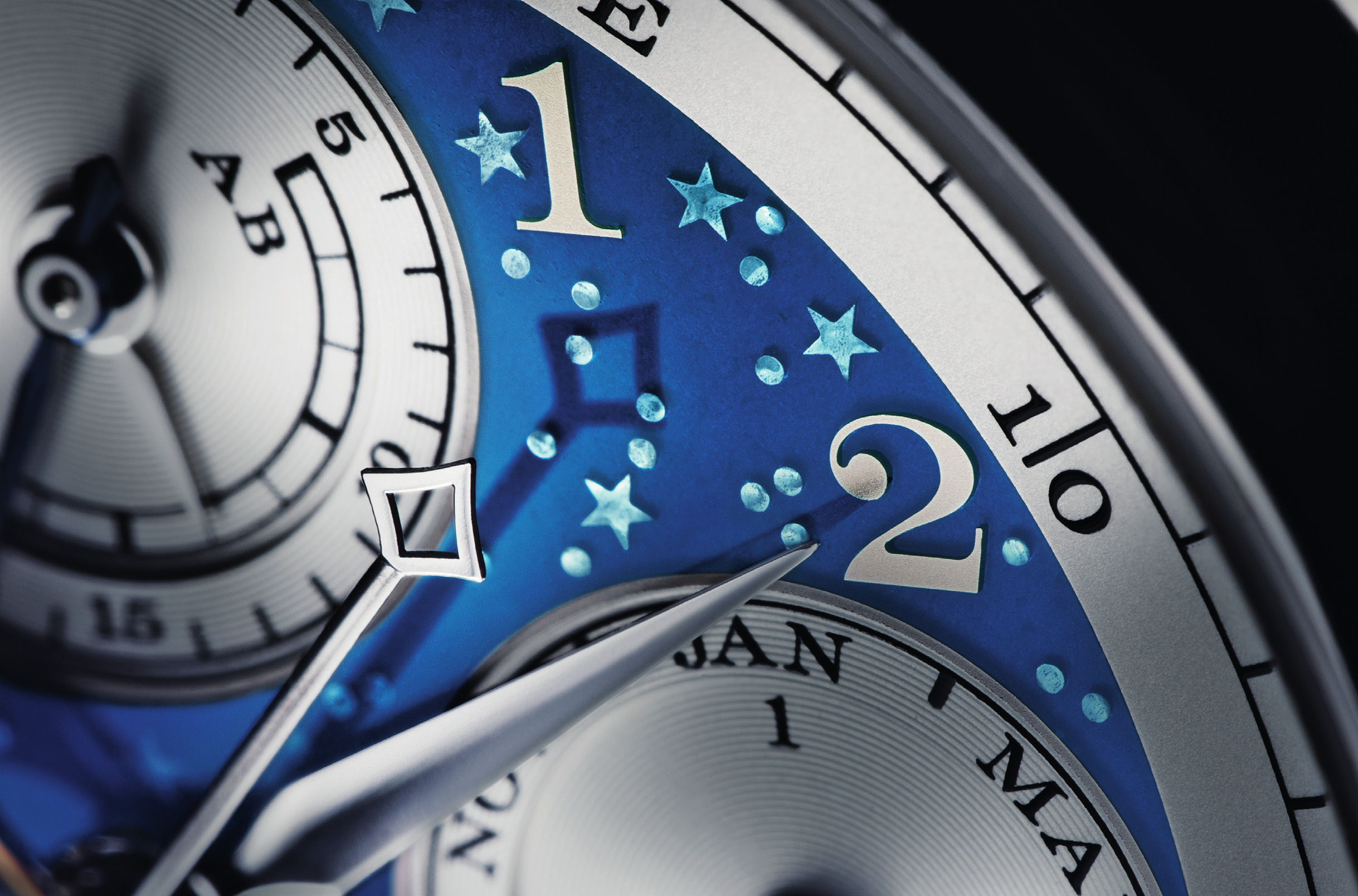