You can do a lot with a figure eight. Over the years, Jaquet Droz has used its iconic Grande Seconde dial configuration — a figure-eight design with a small subdial for the hours and minutes atop a larger subdial for the seconds — as the template for numerous variations. In recently released models, the larger subdial has hosted a second-time-zone display (I review that watch here) and a moon-phase, for example. With the new and somewhat oddly named Grande Seconde Skelet-One, introduced this year at Baselworld, the brand has introduced its boldest and most unusual take on the Grande Seconde to date. 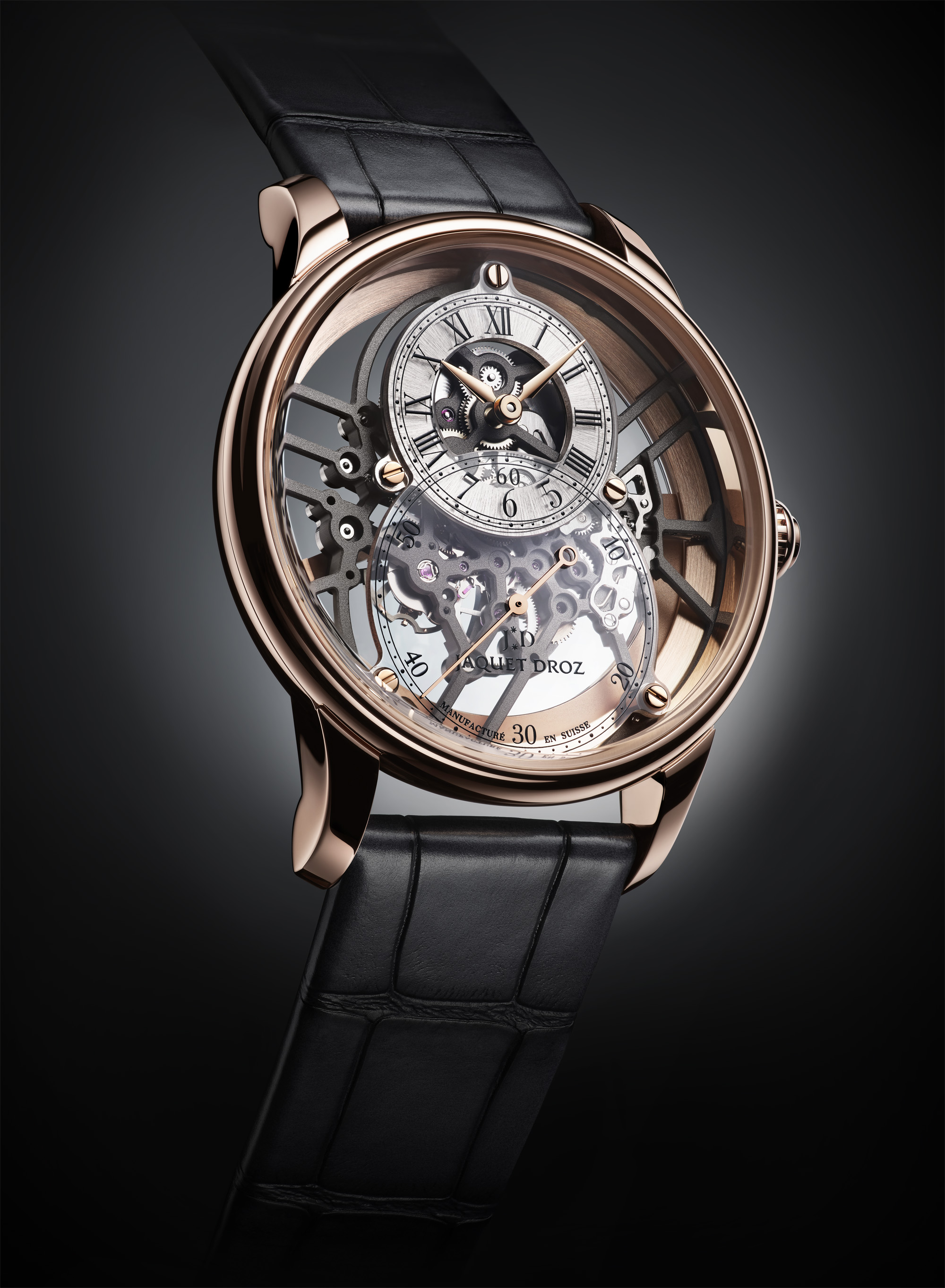 I had a chance to review the watch — Jaquet Droz’s first foray into the niche horological realm of skeletonisation — in its black ceramic case (models with a white-gold and rose-gold case are also offered). It is from first glance a timepiece that draws the eye, with its latticework of horological components, stripped down to their barest essentials, on full display behind a wide sapphire dial, which is framed by a narrow, black ceramic bezel with a sleek polished finish.

"It’s further proof, in the wake of the Grande Seconde GMT and moon-phase complications that preceded it, that Jaquet Droz is making serious inroads into expanding the range of what’s possible in its flagship collection."

The shiny ebony case is a modest 41.5 mm in diameter and just 12.48 mm thick, smaller than I have come to expect from Jaquet Droz, which tends to go a little bigger to allow its two stacked subdials a fair amount of space to breathe: the Grande Seconde Black Ceramic Power Reserve Clous de Paris that I reviewed last fall, for example, is also cased in black ceramic but measures a stately 44 mm. Obviously, this design is far afield of any Grande Seconde that came before it, and the more restrained dimensions make sense considering how the movement conforms to the case, more on which below. The lugs flow easily from the sides to connect to the black fabric strap, leaving just a smidgen of space between case and strap. The crown is in gold rather than ceramic; it’s relatively small, fluted, and topped by a flat surface with the two etched stars that signify the Jaquet Droz brand. 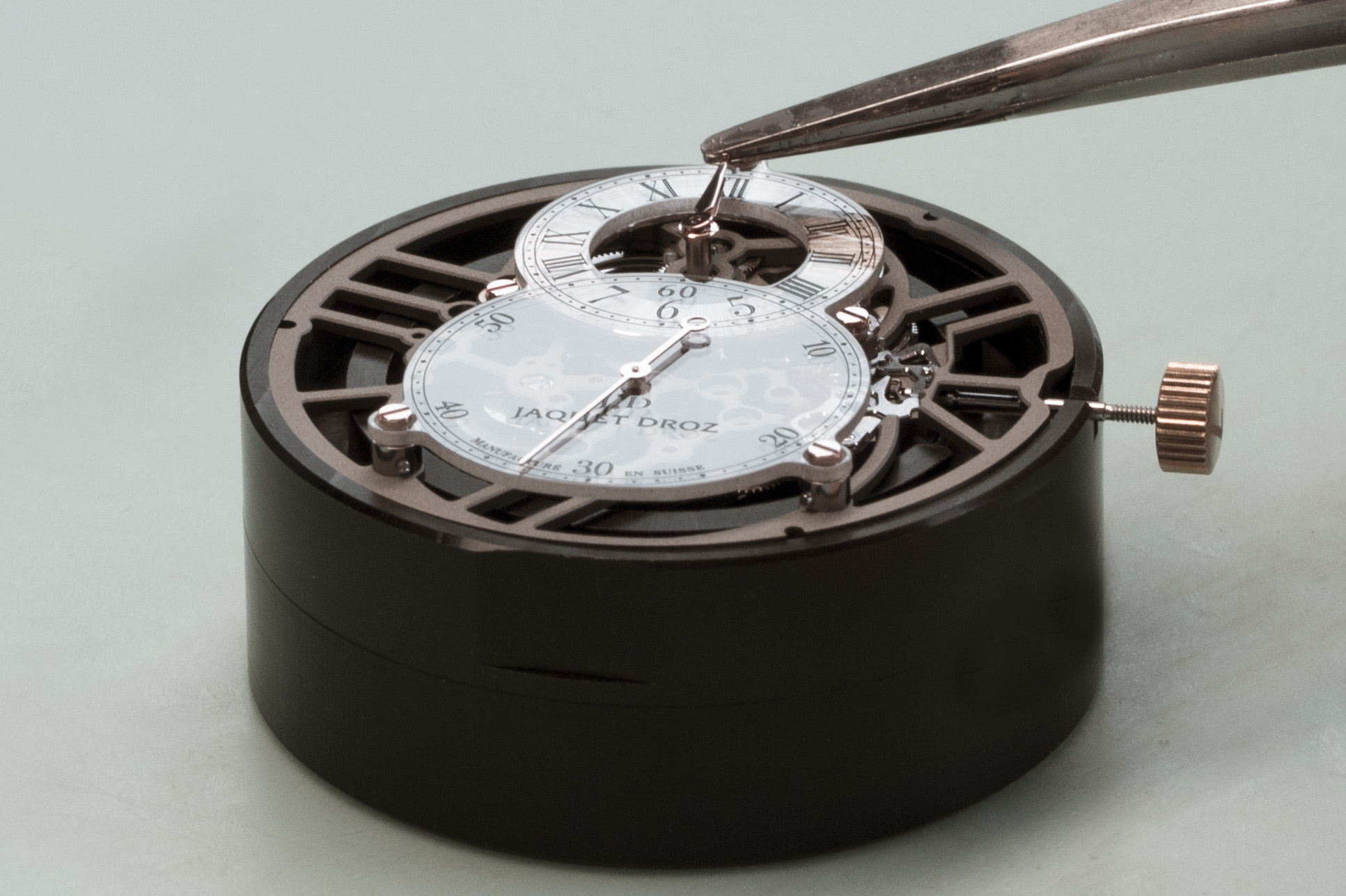 As on most Grande Seconde models, the hours and minutes are revealed on the upper subdial, with applied gold indices swept over by gold sword-shaped hands. Here the hour ring is made of sapphire and set on a gold base, held fast by three screws whose slotted heads are perfectly oriented to align with a corresponding hour marker — a technical feat heretofore unheard of in horology, and one which Jaquet Droz says was

"Among the elements of the new Jaquet Droz Caliber 2663 SQ (“squelette”) visible from the front are the entirely open-worked mainplate; the balance wheel hypnotically beating at 28,800 vph; an array of rubies and even the large rotor with a cut-out centre, made of solid rose gold. "

“derived from an existing armoury system and adapted by the brand’s technical team.” On another sapphire disk is the large seconds subdial, with a faintly printed minute track and a gold hand with a long, loop-ended counterweight, held by two more screws to the spiderwebbing bridges of the movement underneath.

Breaking a bit with established Grande Seconde design tradition, there are no Roman numerals on the upper dial and no Arabic numerals on the lower; the latter would most likely have been scantly visible in any case. There is a Jaquet Droz logo printed on the lower dial, though again it does not exactly leap out at you as it is dominated, and by and large erased in most lighting conditions, by the skeletonised structure behind the sapphire surface.

Among the elements of the new Jaquet Droz Caliber 2663 SQ (“squelette”) visible from the front are the entirely open-worked mainplate; the balance wheel hypnotically beating at 28,800 vph; an array of rubies and even the large rotor with a cut-out centre, made of solid rose gold. Making the whole ensemble even more dynamic is the lack of a casing-up ring around the movement, ensuring that all elements “bleed” all the way to the periphery of the inner case for a more open composition. The black treatment on the movement parts harmonises with the shiny black case to give this version of the Skelet-One a more unified, monochromatic look than those of the gold-cased versions.

Obviously, the rotor is even more prominent in the view from the back of the case, along with an even clearer view of the balance and of the double spring barrel, which is made of silicon along with the spring itself and the pallet lugs. The two barrels are essential in storing the watch’s impressive 68-hour power reserve. Another nice touch: the watch’s limited edition number, engraved into the gold rotor. 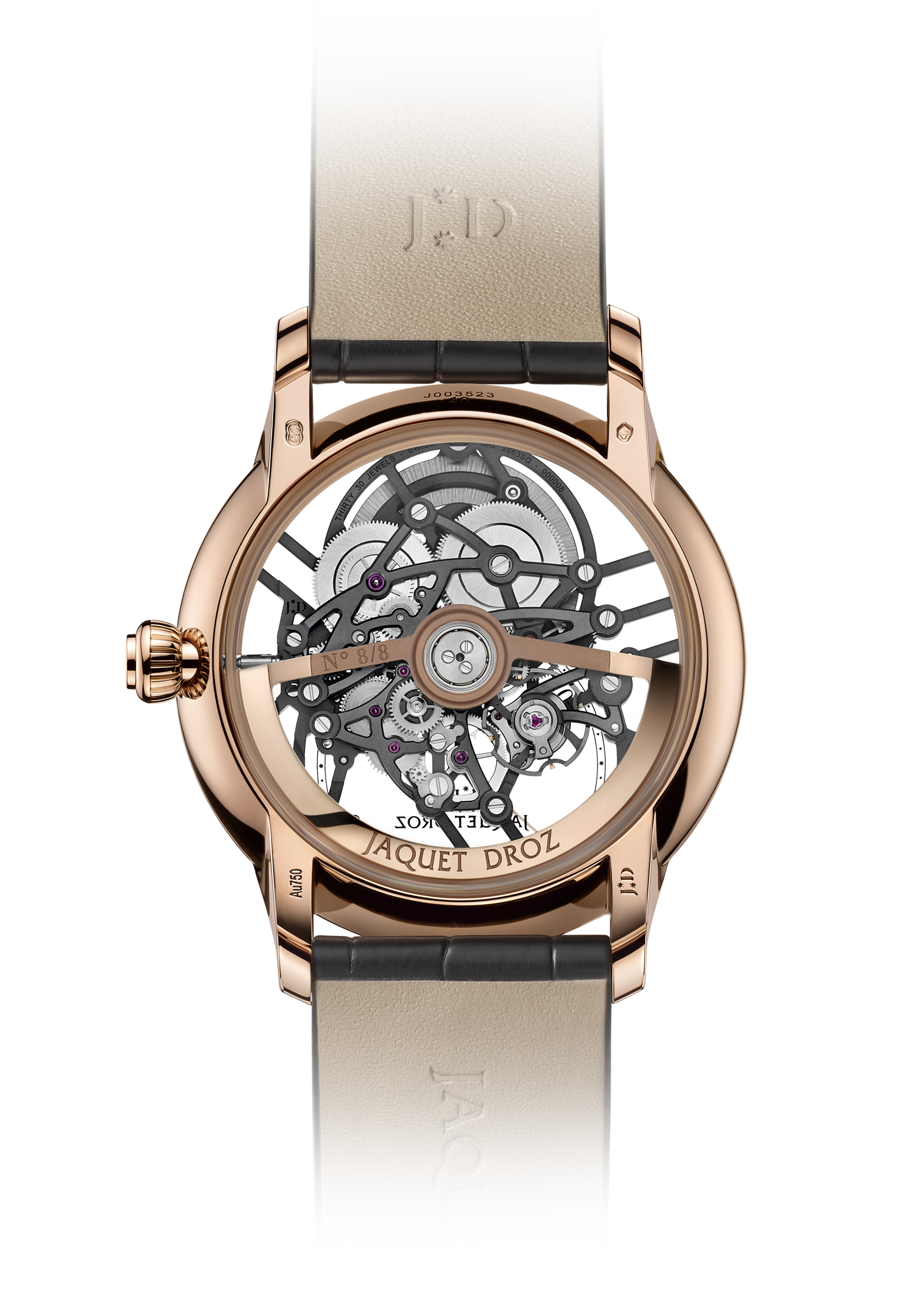 To be sure, the Skelet-One, like most skeleton watches, cannot claim optimum legibility as its strongest suit. Between the hours and minutes being confined to a small subdial, the hands and indices getting lost amid the exposed, open-worked and blackened movement, and the otherwise aesthetically justified lack of Super-LumiNova on any of the dial elements, good luck reading the time at a glance in dim light.

"Another nice touch: the watch’s limited edition number, engraved into the gold rotor."

Nevertheless, as an eye-catching example of the watchmaker’s art, this timepiece succeeds admirably, and incorporating the brand’s hallmark figure eight styling into the proceedings makes it distinctive from many of its skeletonised brethren.

It’s also quite comfortable on the wrist; as mentioned before, the size is modest enough to be dressy, the sober colour combination of black, gold, and metallic greys ensure that it looks good with all kinds of dark formalwear, and the rolled-edge black fabric strap with soft leather underside fastens securely with Jaquet Droz’s extra-secure double-folding clasp, which uses a combination of black ceramic and black PVD-treated stainless steel. 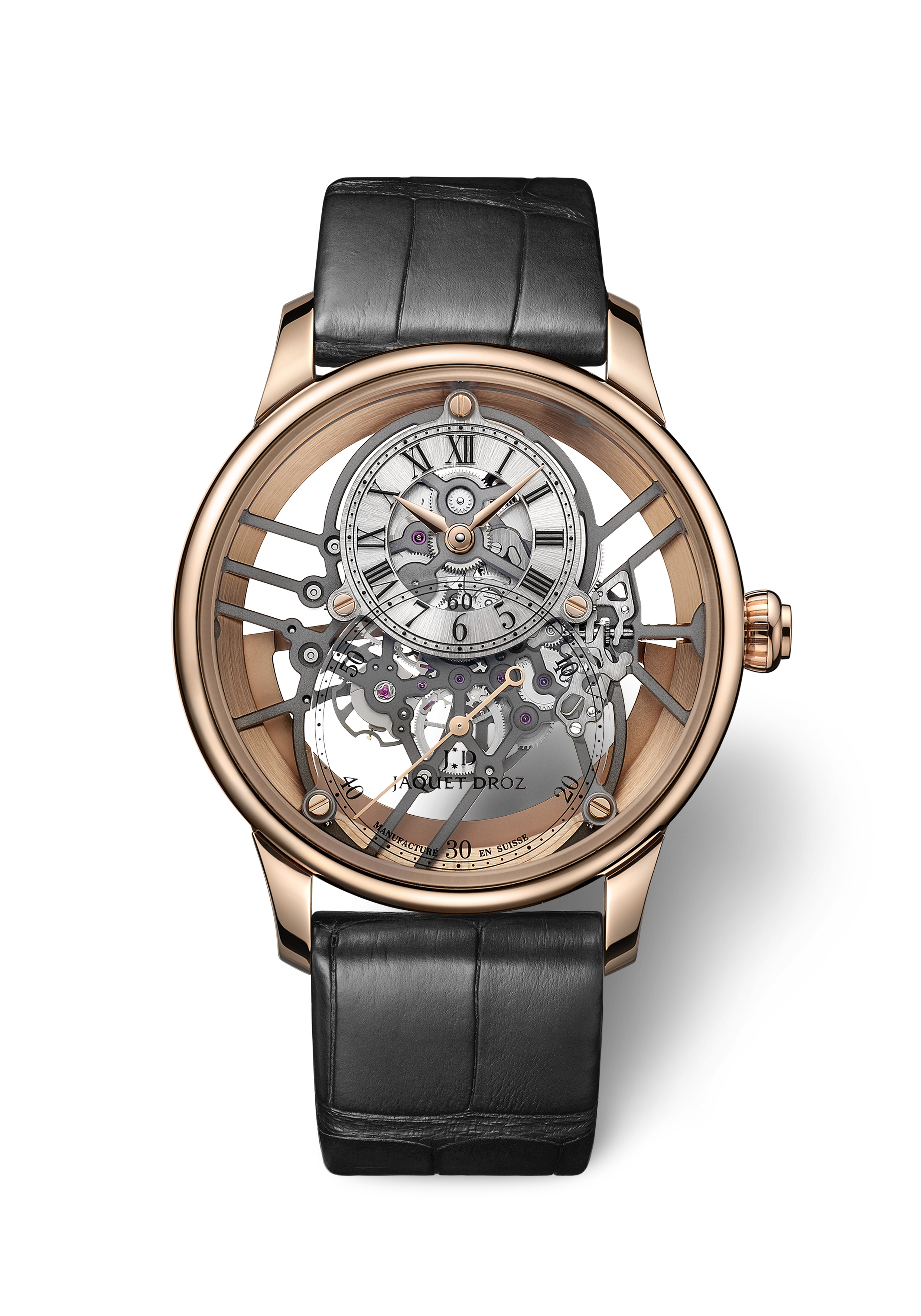 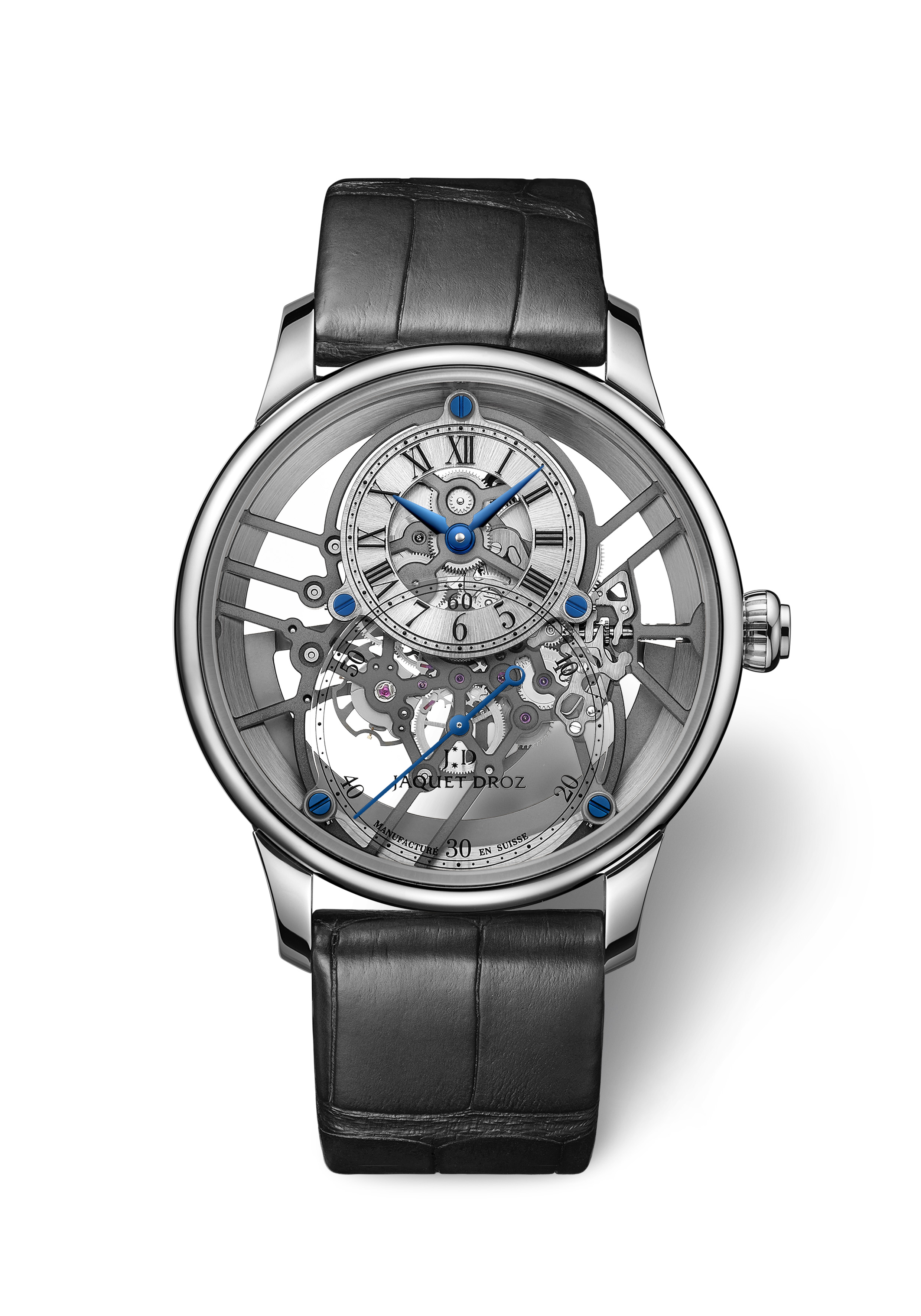 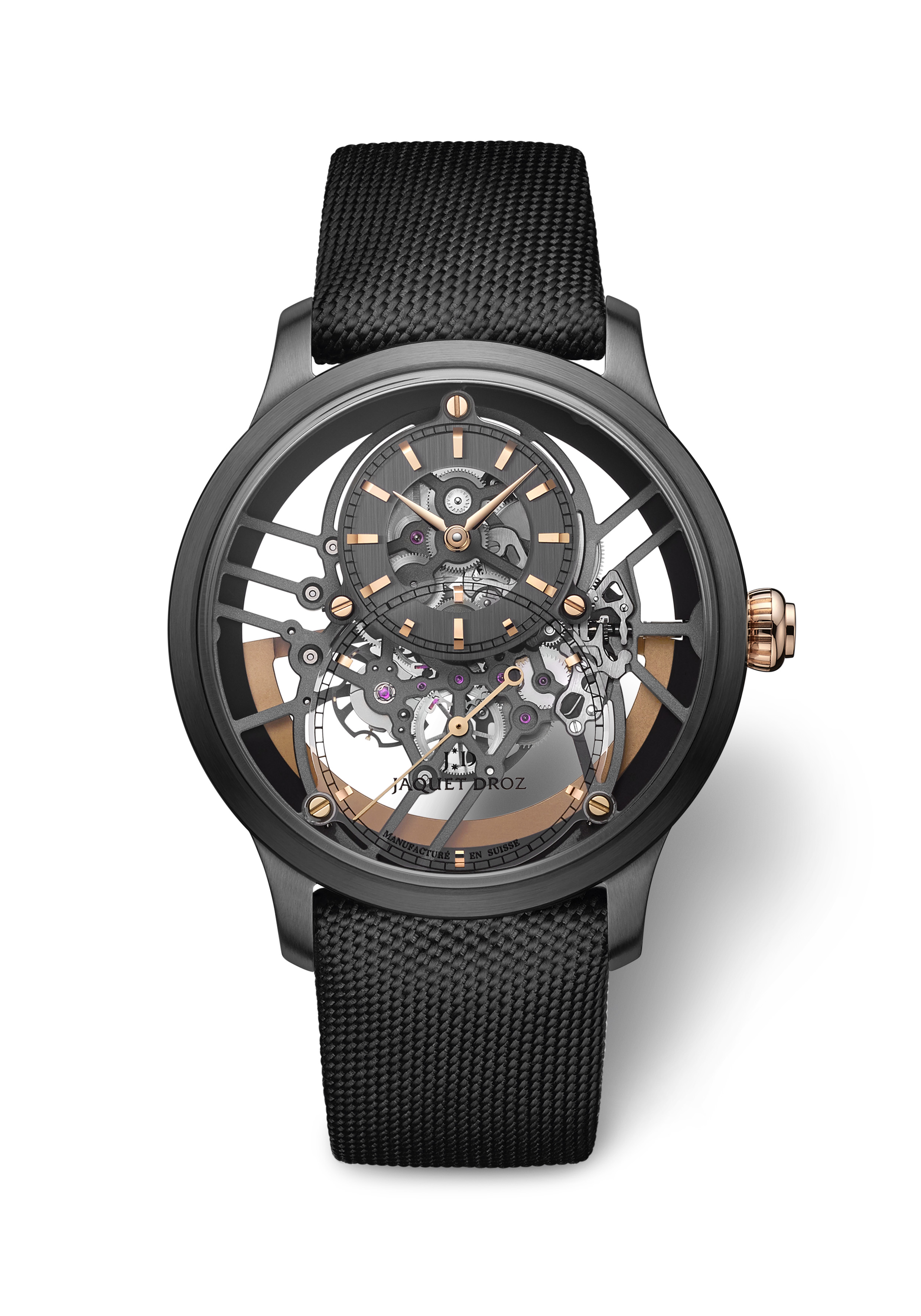 The Jaquet Droz Grande Seconde Skelet-One retails for $24,200 (Rs. 17.45 lakh approx.) in this ceramic-cased version, and $33,600 (Rs. 24.22 lakh approx.) in both its rose gold and white gold iterations. And whether or not its distinctive, skeletonised look is your cup of tea, it’s further proof, in the wake of the Grande Seconde GMT and moon-phase complications that preceded it, that Jaquet Droz is making serious inroads into expanding the range of what’s possible in its flagship collection.