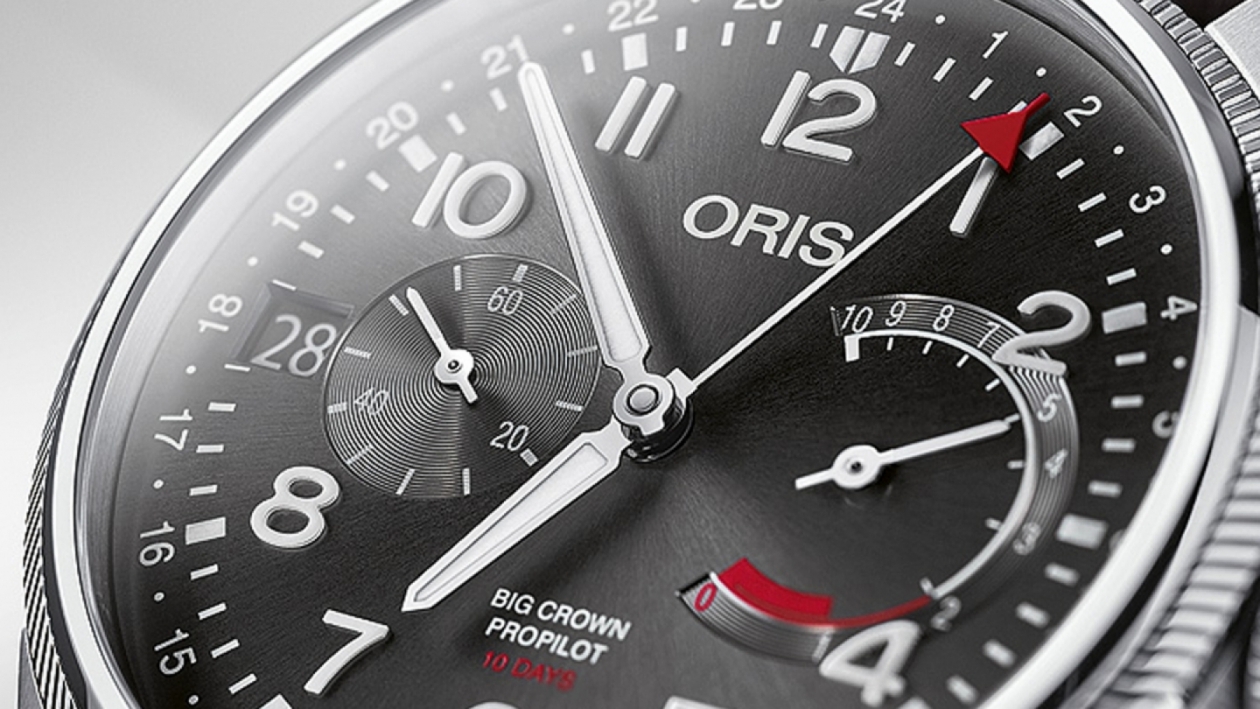 The Oris Big Crown ProPilot Calibre 114 hosts the latest version of the brand’s hand-wound caliber with a 10-day power reserve. It can also show the time in zones that differ by 30 minutes as well as a full hour. We give it a closer look in this review from the WatchTime archives. 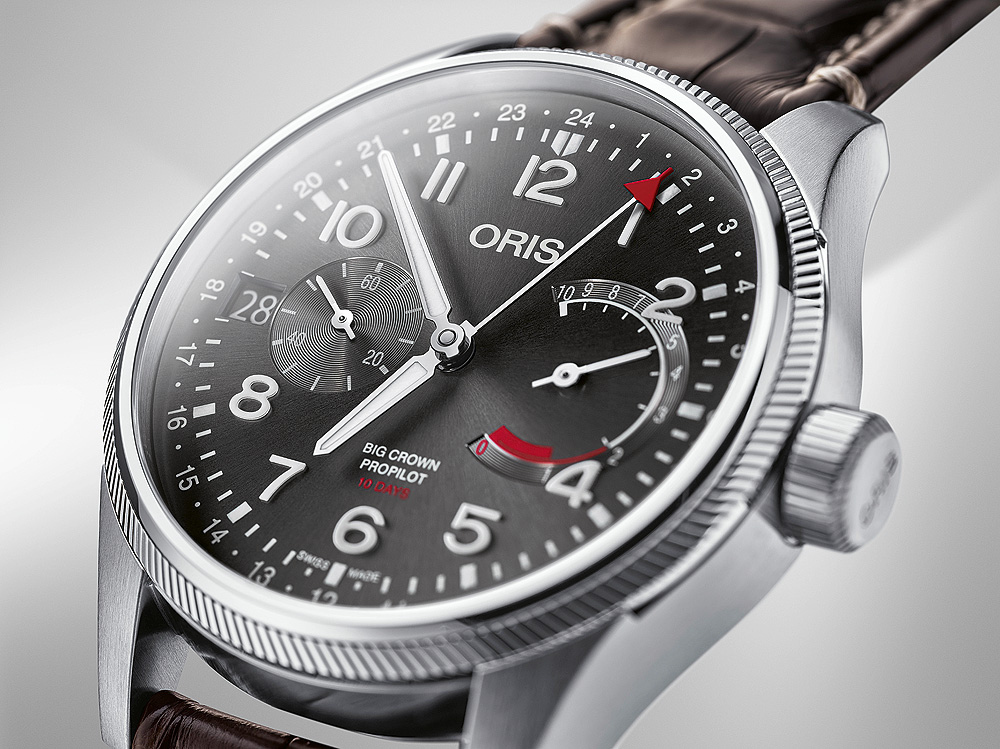 Suppose we’re flying from Germany to India in the summer. During our flight, we reset the large white hands on our Oris Big Crown ProPilot Calibre 114 three and a half hours ahead – for example, from 12 noon to 3:30 in the afternoon. We also want to keep an eye on home time back in Central Europe, so we reset the slim, black hand with the red arrow at its tip to show CET as our second time zone. This can easily be accomplished by pulling the crown out to its middle position and then turning it clockwise until the red triangle points down to the little 12 on the scale along the edge of the dial.

And suppose we want to keep track of this unusual time difference for a few days after we’ve returned home. To do this, we simply set the hand for the second time zone accordingly. For example, when both large white hands point upward to show that it’s noon in Germany, the slender hand with the red tip points to the dot halfway between 15 and 16 on the 24-hour scale, i.e., 15:30 (3:30 p.m.). To cite another example, when it’s midday in India, the hands on our main dial show that it’s 8:30 a.m. in Central Europe.

This type of hand configuration can be used to stay in sync with business associates in a different time zone. Of course, it also functions perfectly well in full-hour increments, but few other timepieces can be set to indicate the time in a zone that differs from its neighbour by half an hour. One fairly well-known example is the complex architecture inside Glashütte Original’s Senator Cosmopolite, but the rose-gold version sells for a hefty $43,500 and the stainless-steel model is $21,200. The stainless-steel version of Oris’s Big Crown ProPilot Calibre 114, our test watch, lets armchair globetrotters dream of distant locations for considerably less ($6,100 with crocodile strap), but it requires them to devote a bit of thought to resetting the time whenever they fancy flying to a new zone. However, the effort may not seem that great because it’s a pleasure to operate the big crown, which is also the namesake of the Big Crown pilots’ watch, which premiered in 1938.

The watch’s fluted winding crown is easy to grasp, unscrews easily and snaps into each of its pulled-out positions with a palpable click. Its first position is for manually winding the mainspring; its middle position is for rapidly resetting the date display and adjusting the red-tipped time-zone hand; and its outermost position is for setting the large white hour hand and minutes hand, a job made easier and more precise because the movement automatically stops the progress of the seconds hand when the crown is pulled into this outermost position. The large crown isn’t the only detail that reaffirms the stylistic characteristics of the Big Crown ProPilot collection. The ample, 44-mm, solid stainless-steel case of the Calibre 114 watch has a bezel with diagonal fluting inspired by the blades of a jet aircraft’s turbines. The dial has typical pilots’-watch features including, first of all, wide white hands and large Arabic hour numerals, which provide strong black-and-white contrast in the light and glow a handsome shade of blue in the dark. The bold contrast continues with clear, easy-to-read scales for the minutes and for the 24 hours in a second time zone on the dial’s edge. This type of scale is seldom found with such clarity because most 24-hour indicators are crowded onto small subdials.

And speaking of subdials, the Big Crown ProPilot Calibre 114 has two: one for the seconds at 9 o’clock and a larger one to show the power reserve at 3 o’clock. This latter indicator is now included on all five calibers in Oris’s recent manufacture series. The date came aboard with Calibre 111, which followed Calibre 110. Lacking a date display, Calibre 110 was Oris’s first manufacture movement after a 35-year hiatus. It debuted in 2014 to celebrate the brand’s 110th birthday. While Calibre 111 also ticks inside a Big Crown, Calibre 112, with second time zone and day/night display on a subdial at the 12, can be found only in Artelier models. (Ditto for Calibre 113 with full calendar and calendar week.) Version 114 now puts a second time zone onto the main dial of the Big Crown ProPilot in the form of a 24-hour indicator calibrated in half-hour increments. 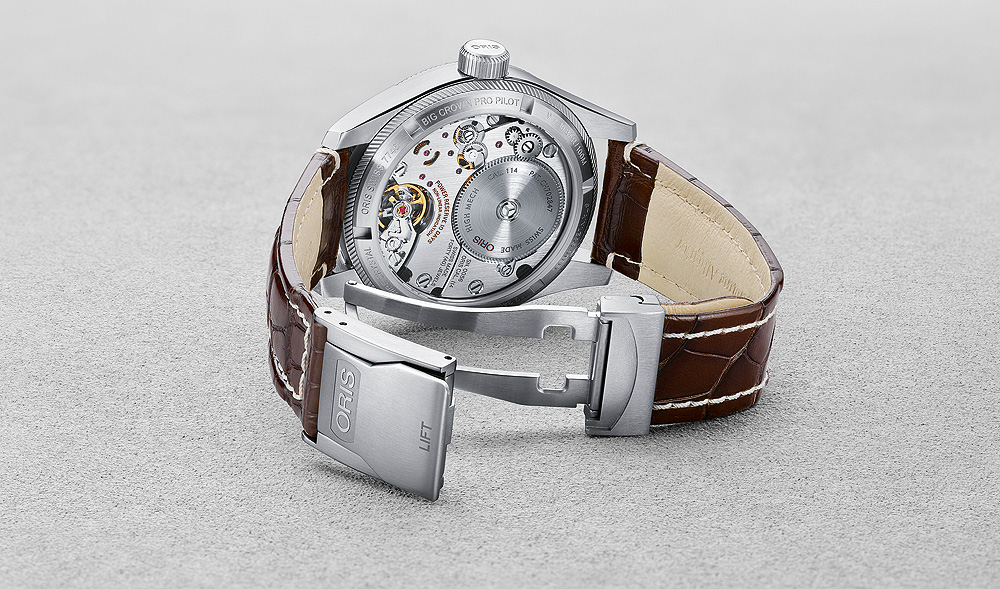 This model marks a new highlight in the company’s history, when Oris developed dozens of timepieces with indicators for a second time zone. Well-known examples in the current collection are the Big Crown ProPilot Worldtimer, the ProDiver GMT and the limited-edition GMT from the Artelier collection.

In addition to a scale for the second time zone, the dial of the Big Crown ProPilot Calibre 114 also hosts a power-reserve display in the shape of a 240° arc. The number of degrees in the arc is quite symbolic: as in all calibers in the manufacture series, here, too, it stands for 10 days, i.e., 240 hours of autonomous power from just one barrel. However, the little white hand on the patented power-reserve display doesn’t run uniformly, i.e., one degree of arc per hour or 24 degrees of arc per day. Close scrutiny finds that the distances between the numerals representing the individual days grow progressively larger as the power reserve wanes.

This means that the slim white hand doesn’t move with the same speed from the 10 (fully wound) to the 0. The welcome effect is that the critical range of the power reserve, the final four days, can be read in greater detail and thus seen more clearly when the time comes for the wearer to begin thinking about winding the watch, assuming he or she doesn’t perform this task regularly with daily wear. But if the watch hasn’t been wound for several consecutive days (which poses no problem for the timekeeping) or if it hasn’t been worn for a long time, then tightening the mainspring until it’s fully wound takes some effort.

The technical basis for the non-uniform power-reserve display is two eccentric spiral-shaped wheels that rotate in opposite directions so the pointer moves at the desired speed. Oris collaborated for 10 full years with École Technique Le Locle to develop this custom-tailored cam system to indicate the 10-day power reserve. To achieve a good rate curve, the power relationships in the movement between the large barrel and the small balance had to be meticulously calculated.

Furthermore, the cross section of the barrel drum and the number of windings of the 1.80-meter-long mainspring had to be very precisely matched.
In its manufacturing process, Oris collaborates with more than 20 independent partners, which are not part of any corporation but supply products to renowned luxury brands. The Calibre 114 is 100-percent Swiss made. The rate test showed that our test watch kept time day after day with only gradually declining amplitudes and a nearly unchanging average gain that ranged between 7 and just under 10 seconds per day. However, the difference among the several positions was rather large. 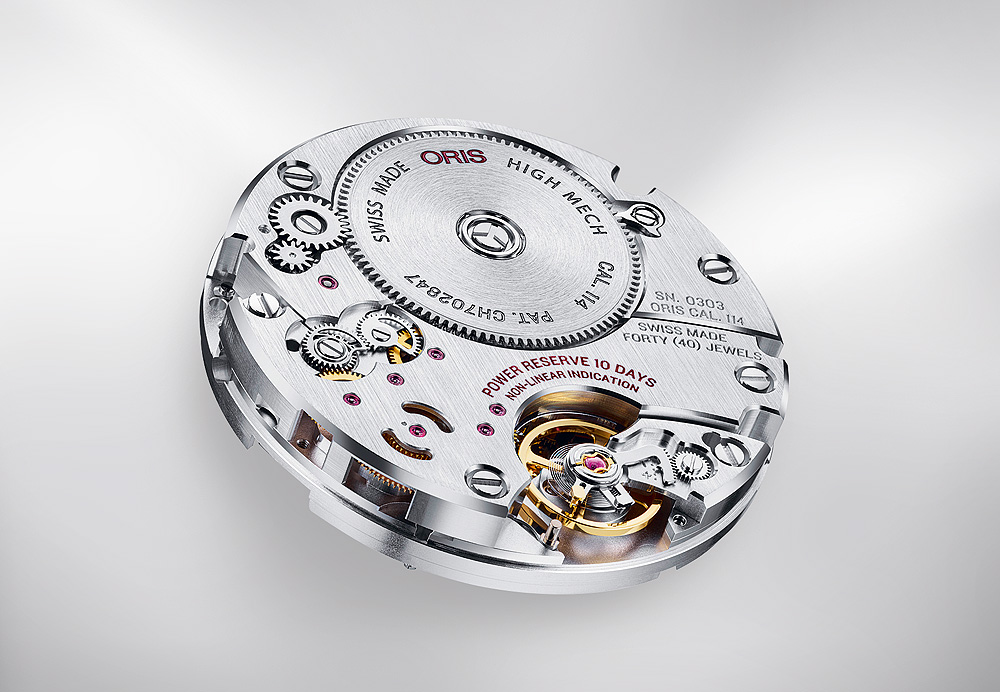 The watch’s rate behaviour showed no significant changes until the eighth day, when the hand on the power-reserve display approaches the red zone. Oris has wisely marked this span in red because although the movement is still running, it no longer shows satisfactory rate behaviour. The watchmakers conceived this non-uniform display to emphasise that the indicator isn’t intended simply to show the remaining interval after full winding, but to serve as a genuine “reserve,” i.e., the watch is still ticking, but it’s no longer running as well as it should. In practice, the Big Crown ProPilot Calibre 114 will continue to run even longer than the 10 days indicated on its power-reserve display. You can see this when you begin winding the watch after letting it run down completely.

You might be puzzled when you notice that the hand on the power-reserve display remains motionless during the first few rotations of the crown and only begins to move afterward. The indicator looks deceptively simple, but it actually solves a thorny horological conundrum. The differential train of the power-reserve display must uncouple the hand when it reaches the end of its 240° arc and the watch is still running. Afterward, the train must re-engage the hand when the movement is being manually wound. The hardware for this technology is concealed, but if you look through the fully threaded screw-in transparent back, you can see the unusual arrangement of teeth on the cams of the power-reserve differential. They’re positioned inconspicuously at the periphery of the gigantic barrel, which occupies more than half the radius of the movement. Since the balance is comparatively small, only at second glance does Oris’s own design for fine tuning stand out. This takes place via an angled pointer that meshes with a gear surrounded by a slotted-head screw. Oris deliberately adjusts its watches to gain slightly, as we saw in the rate behaviour of our test watch. We found very similar results when we tested Calibre 111 in 2017. The specialists at Oris are quite satisfied with this state of affairs.

What’s the bottom line? Our experience showed that the bold, basic concept of this movement, in its fifth version, is practical and results in very stable rate behaviour. This fact is supported by the behaviour of the Big Crown ProPilot Calibre 114 on the wrist. Regardless of whether it’s worn with a stainless-steel bracelet or a textile or leather strap, it feels comfortable and serves as a reliable companion – for a long period of time and over long distances.