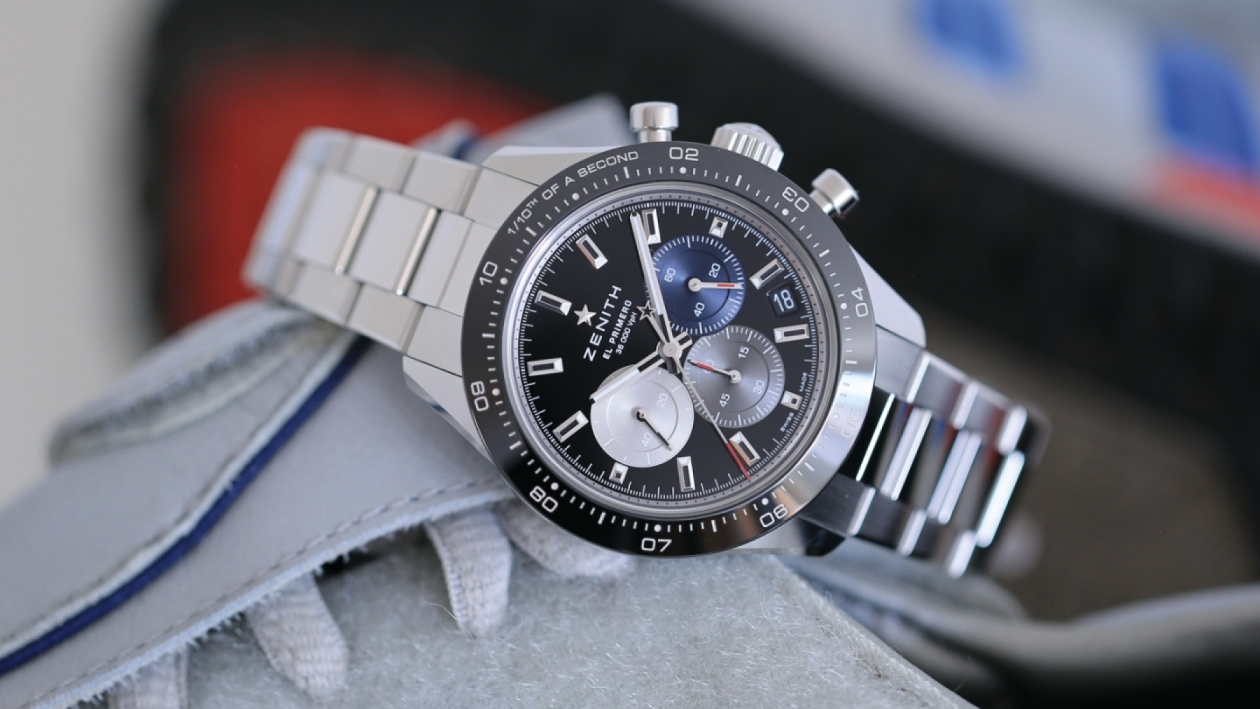 Zenith has always been all about pushing the boundaries of mechanical timekeeping precision. The Le Locle-based manufacture still holds the world record for chronometry Observatory Prizes, at 1,565. In 1969, Zenith made history with the introduction of the original El Primero calibre, which was notable for, among other aspects, its uncommonly high frequency of 36,600 vph (5 Hz), which in practical terms meant that its integrated chronograph could record elapsed times not just to the second but to the 1/10th second. The El Primero would become the cornerstone upon which Zenith would build its modern brand for many years to come. In most watches that housed this now famous movement, however, the dial was not designed to actually record these minuscule measurements in an easily legible way. This year, Zenith remedied that with the introduction of the Chronomaster Sport series, which houses the most recent, most optimised version of the El Primero with an ultra- readable ceramic bezel with an etched, graduated 1/10th-second display.

The Chronomaster Sport marks, according to Zenith, “a new era for the quintessential Zenith sporty- chic chronograph,” the El Primero- equipped Chronomaster, whose other recent variations have included more retro-influenced models like the Chronomaster Revival Manufacture Edition and Chronomaster A385 Revival. The new model bears some of those models’ vintage influences: Its sleek, 41-mm steel case features the pump-style chronograph pushers of earlier models, and the tricompax dial (in either matte black, as on our review model, or matte white) hosts a set of overlapping subdials in the classic El Primero colours of blue, anthracite, and light grey, just as they appeared on the classic A386 model from 1969. The case boasts an appealing array of satin- brushed and mirror-polished finishes on its curves and facets, all the more prominent on the bracelet-mounted version of the watch we reviewed, where that variety of shiny and matte surfaces continues seamlessly from lugs to links.

The pushers take just a modicum of pressure from a fingertip to activate, engaging with a light metallic click. In between these pushers, with their slightly rounded and polished heads, is the fluted, two-position crown with a relief Zenith star emblem in its centre. The crown is relatively small and set tight to the case, which is aesthetically pleasing but from a utility standpoint is a bit difficult for fingers to grip and turn. Definitively modern in contrast to all the watch’s historical details is the polished black ceramic bezel, with its white-etched scale for recording 1/10th-second timing intervals, which debuts on this new watch and imparts a substantial portion of its ‘Sport’ character. A close look at the etched bezel reveals the subtle alternations in the orientation of the numerals on the scale in the service of legibility.

Drilling down on the black lacquered dial’s details, most all of the classical Chronomaster El Primero elements are present: The rhodium-plated, faceted block indexes, compressed at the 3, 6, and 9 o’clock positions to accommodate the subdials; a rounded- edge rectangular window at 4:30 for the date display, with a date numeral in white on a black eld; and the aforementioned, recessed subdials gently overlapping each other’s edges and finished with a snailed texture that is scarcely visible except under a loupe. The rhodiumed, partially openworked hands have a strip of Super-LumiNova on their tips and the seconds hand (actually, “1/10th seconds hand” might be more accurate) features a star-shaped counterweight and a red tip.

As stated above, however, the central hand and subdials serve a slightly different array of tasks than they do on ‘standard’ El Primero chronograph watches. Pressing the top pusher sends the central red- tipped counter into lightning-quick action, sweeping around the dial and the ceramic bezel’s scale in 10 seconds rather than 60. Simultaneously with the central hand completing its sixth orbit around the dial, the smaller hand on the 3 o’clock subdial, customarily the display for elapsed minutes, makes one complete rotation around that subdial’s white-printed 60-second scale in one minute, while the hand on the 6 o’clock subdial, traditionally used to tally elapsed hours, moves to thefirst index on its 60-minute scale. I defy any wearer not to find him or herself transfixed by the dynamic motion of the speeding central hand after activating the chronograph. The bene t here, of course, is that pressing the top pusher again will halt all the hands at once and enable the wearer to read stopped times not just to the second but to the 1/10th second, a particularly useful element in the timing of sporting events.

What has been sacrificed from previous Chronomasters to bring this avant-garde functionality to the forefront? Well, the 1/10th-second scale supplants the tachymeter scale found on some predecessors, so you can’t use it to calculate speeds based on distance. And you can’t time events that last longer than one hour (as opposed to the 12-hour intervals attainable on other models). All in all, those who truly miss these functions are likely to be few; in any case Zenith offers existing models for them.

To read the full review, subscribe to WatchTime India here.