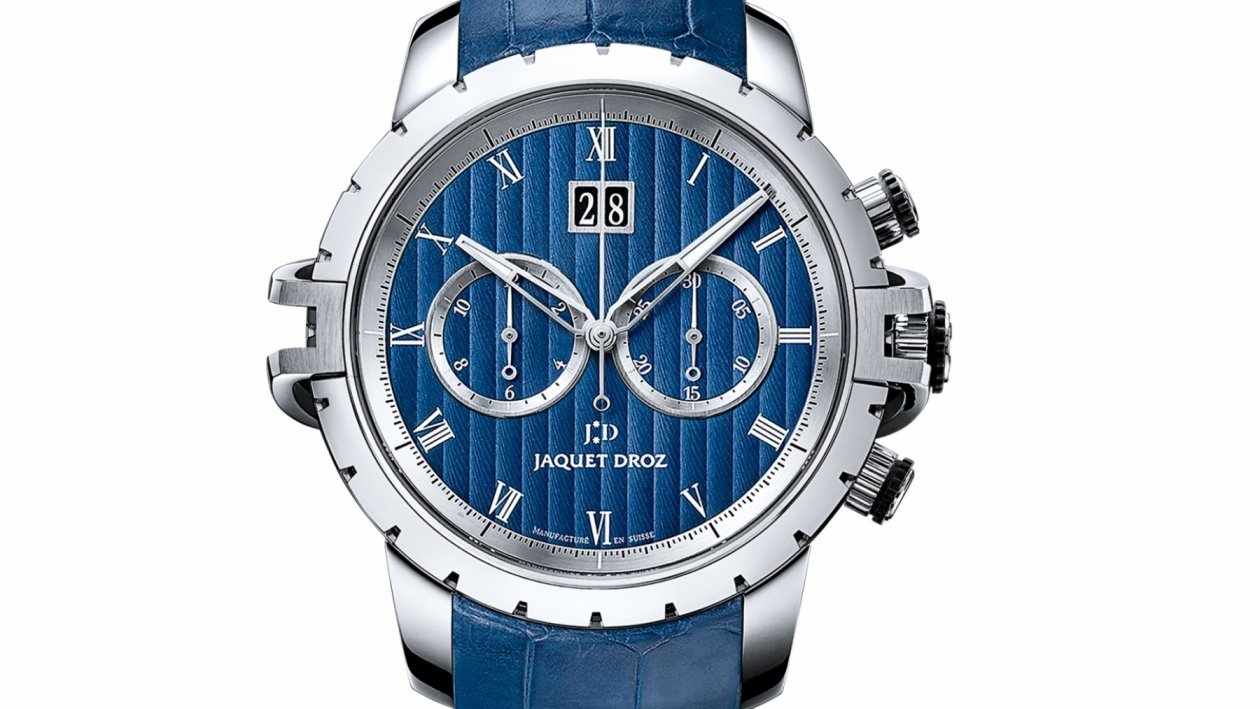 When one thinks of luxury sports watches, Jaquet Droz is probably not a brand that springs immediately to the minds of most watch aficionados. However, the La Chaux-de-Fonds- based, Swatch Group-owned company has been producing its own very distinctive line of sports watches — albeit a bit quietly — since 2008. Dubbed the Jaquet Droz SW (for “Sport Watch”), the collection has grown to include ladies’ models and even a tourbillon, most utilising the iconic figure-eight dial layout of Jaquet Droz’s flagship collection, the Grande Seconde. Recently, however, the brand broke a bit with that design to produce the first SW chronograph — a watch I was very interested in getting my hands on, especially when I glimpsed the very attractive blue dial/ blue strap version. The Jaquet Droz SW Chrono is unmistakably a watch designed to be both luxurious and sporty. The large and rather thick steel case (45 mm in diameter and just shy of 14 mm in height), with its industrial-looking notched bezel, hollowed-out lugs, grooved chronograph pushers, and ribbon-like crown protector, makes an aggressive, masculine statement, while the azure dial’s côtes de Genève pattern, thin white Roman numerals at the hour marks, and elegantly framed double-window big date display at 12 o’clock reassure the prospective buyer that this is a timepiece as suited for evening cocktails as it is for his morning run. 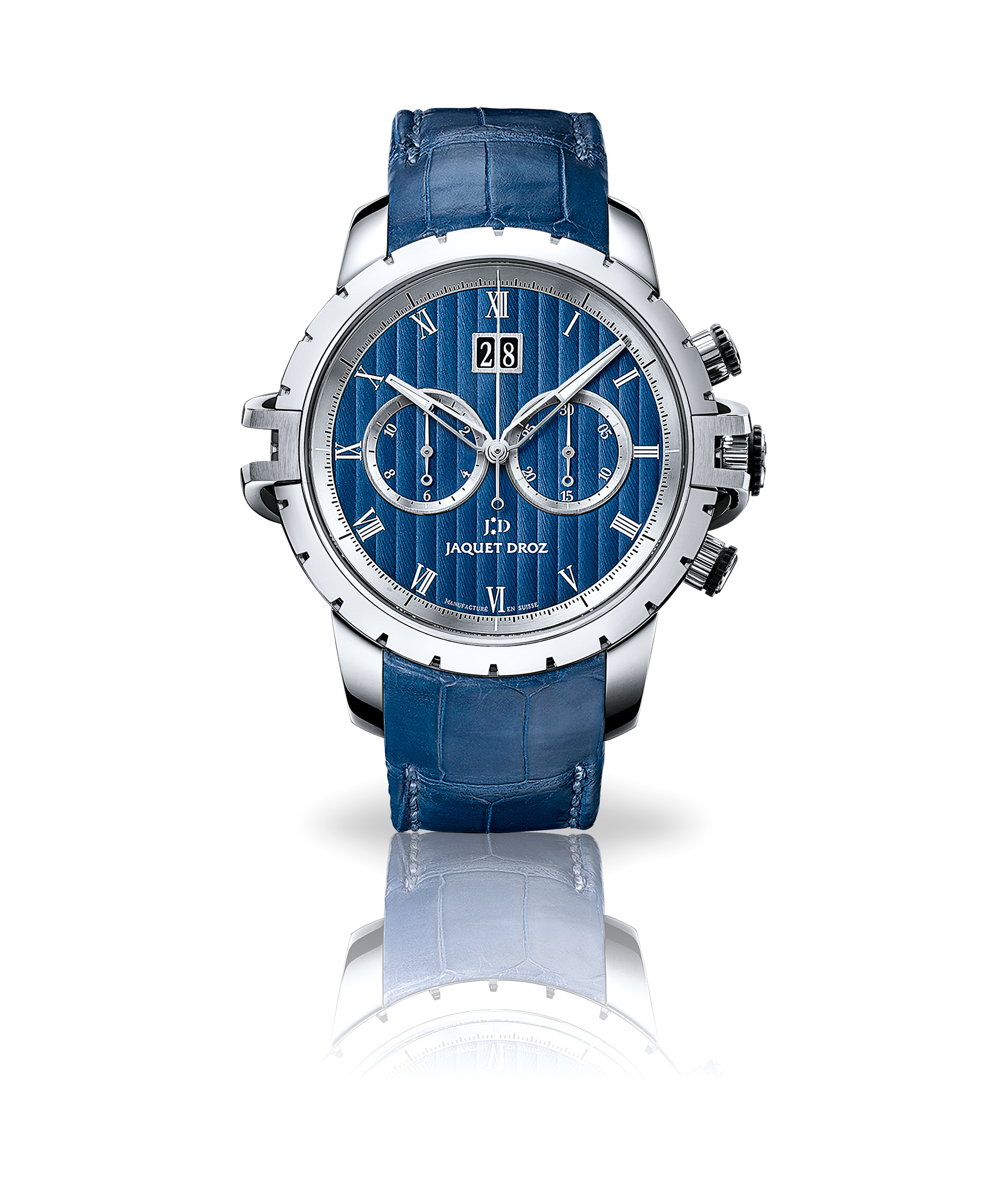 Jaquet Droz has definitely made an effort to distinguish the SW’s case not only from the classically round ones of its other, mostly dressier models, but also from those of other sports watches. It doesn’t always work, frankly — those curved, claw-like protrusions on either side of the case, one of which is employed to guard the screw-down crown, are cool-looking but somewhat superfluous, especially the one on the non-crown side, which seems to be there simply for visual balance (and, perhaps, weight distribution). It seems that function followed form a bit in this case. In fact, the crown guard can guard the crown a little too well, making it a bit difficult for big fingers to rotate it.

The aforementioned lugs, however, do seem to have been designed with a purpose, as they fasten snugly and securely to the alligator leather strap via special screws, keeping this somewhat weighty watch anchored and stable on the wrist while still reducing, if just by a bit, the overall weight with their hollowed-out interiors. 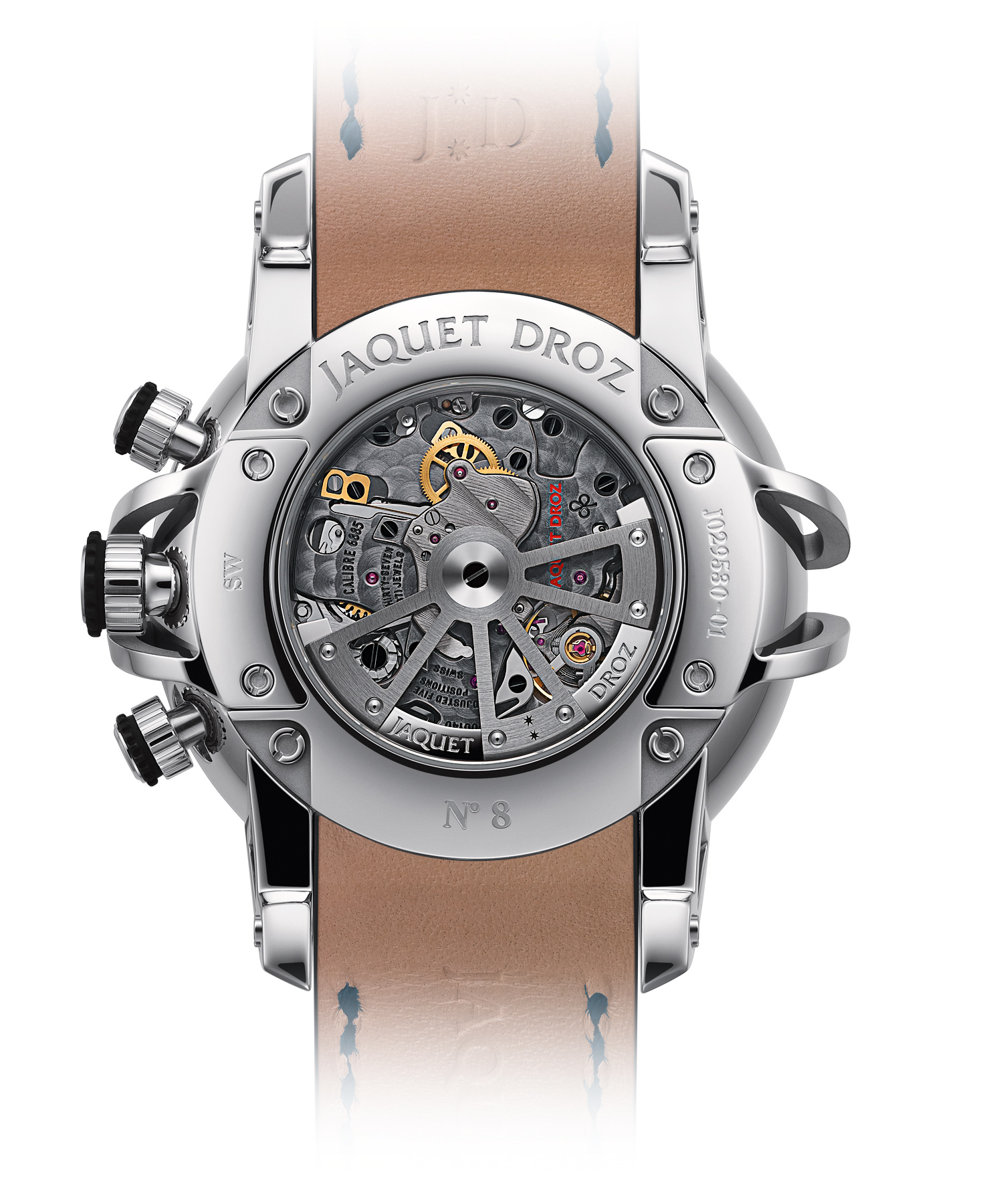 A close look at the crown and chrono pushers reveals a depth of attention to detail. The pushers are plunger-shaped, as on some of the classical sports watches of yore, with polished heads, black rubber rings, and grooved sides. The crown is adorned with a relief engraving of Jaquet Droz’s double-star emblem. At first, one might be confused into thinking that the grooved sides of the pushers mean that they need to be screwed and unscrewed to operate, but this isn’t the case. 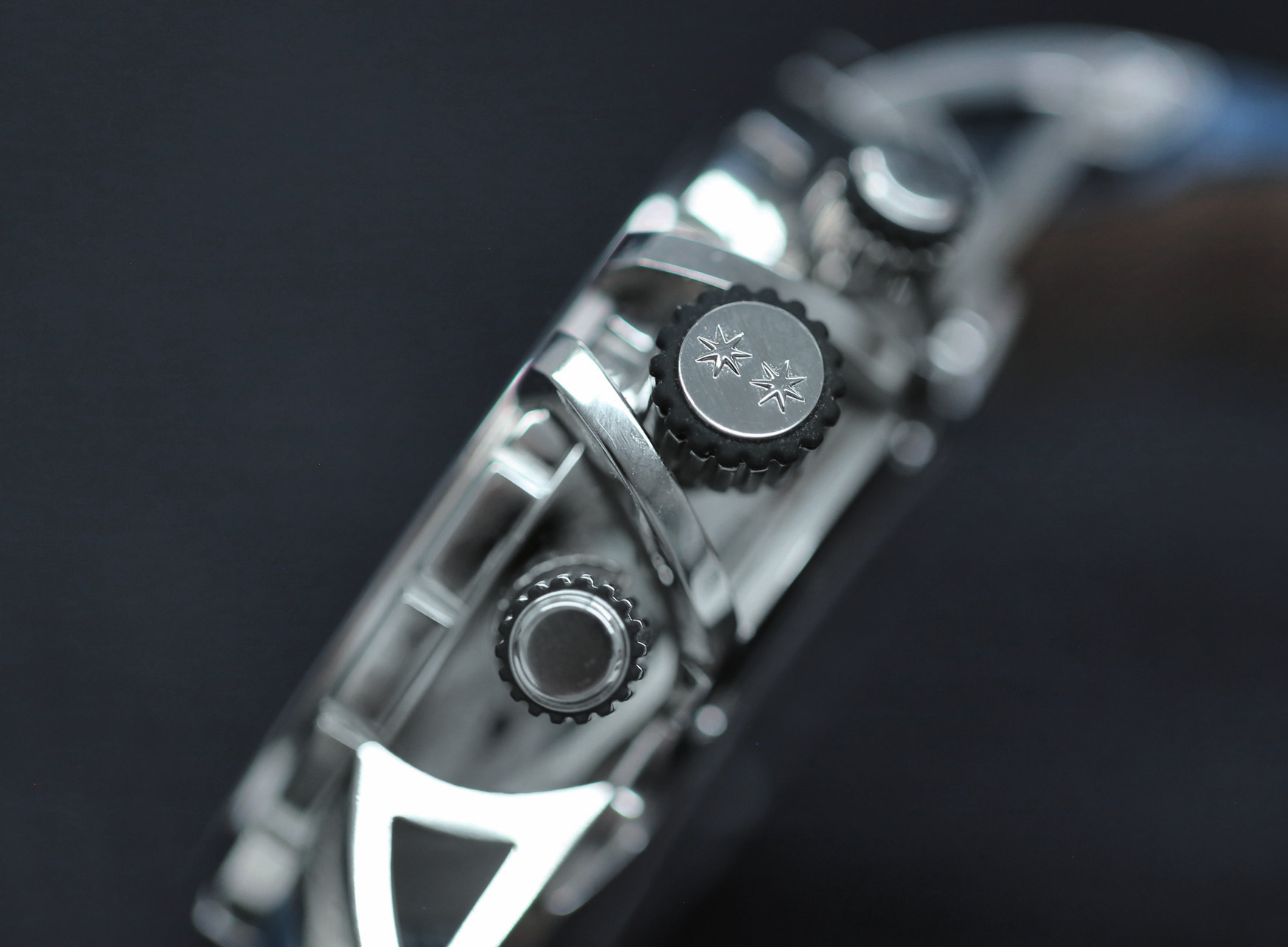 The dial's Côtes de Genève pattern and bright blue colour are very pleasing to the eye. Blue-on-blue has become rather ubiquitous in the luxury watch world these days, but that’s because it simply works so well so often — with Jaquet Droz in particular offering some stunning examples in recent years. The motif — which is an haute horlogerie technique applied far more often to movement parts than to dials — reminds me a bit of a the teakwood deck of an old sailing ship here, possibly due to the somewhat nautical color scheme. This version of the SW Chrono was not (as far as I’m aware) intended as a yachting watch, but I can definitely see it in that role; it is definitely more in its element at a regatta than at, say, an IndyCar race.

The two subdials — 30-minute chronograph counter at 3 o’clock and 12-hour counter at 9 o’clock — are sunken into the dial; the côtes de Ge- nève pattern continues uninterrupted through them. Each subdial features white Arabic numerals in an elegant, serif font, which line up with tiny indexes on the sloped interiors of the round, rhodiumed frames around them. The large date numerals, in their polished steel-framed windows, utilise the same white Arabic numeral font; this display is balanced at 6 o’clock by the Jaquet Droz logo in white. It’s an attractive and harmonious layout, though one wonders why Jaquet Droz didn’t attempt to arrange the chronograph subdials vertically instead, achieving that classical figure-eight look for which its predecessor, the non-chronograph Grande Seconde SW, is known.

The hands are rhodium-treated, skeletonised, and outfitted with Super- LumiNova- filled tips. (The judicious use of luminous material is another reminder that this timepiece leans more toward luxury than sports.) However, the hour and minutes hands are oddly similar in size, which is not ideal for legibility: 10:10, for example, looks a lot like 2:50. And one cannot mention the hands without pointing out the one that is, somewhat oddly, absent on this model: namely, any type of hand to indicate the running seconds, which is the most commonly employed method of discerning at a glance if the watch is running. The caseback, with its screws and countersinks, continues the overall sporty, industrial-chic look, and is equipped with a sapphire window displaying the watch’s engine, Jaquet Droz’s automatic Calibre 6885-S, a proprietary movement that is undeniably a beauty. The rotor, made of 18k white gold, is skeletonised and brings to mind a car’s steering wheel. Behind it you can see the column wheel that controls the chronograph’s operations and the balance spring oscillating at the speedy rate of 21,600 vph. The bridges are graced with perlage and the majority of movement parts have been finished with a sleek ruthenium treatment. The Jaquet Droz logo appears subtly but emphatically in bright red on one of the bridges. The watch’s series number is engraved on the caseback.

Finally, to the actual wearing: this watch, it must be said, has one of the most complex buckle systems I’ve encountered. It’s a steel double-folding push-button clasp, with an extra, hinged attachment, anchored on each side of the push buttons, which detaches on one side and can then be reattached once you’ve found the right size for your wrist. It’s an extra level of security, I suppose, albeit one that isn’t necessarily all that easy to figure out if you’re wearing the watch for the first time. The rolled-edge, hand-made blue alligator strap, with tone-on-tone stitching, does provide both an elegant look and a snug, comfortable feel. The Jaquet Droz logo appears once again as an engraving on the buckle, which has a subtle toothed edge echoing the theme of the notched bezel. 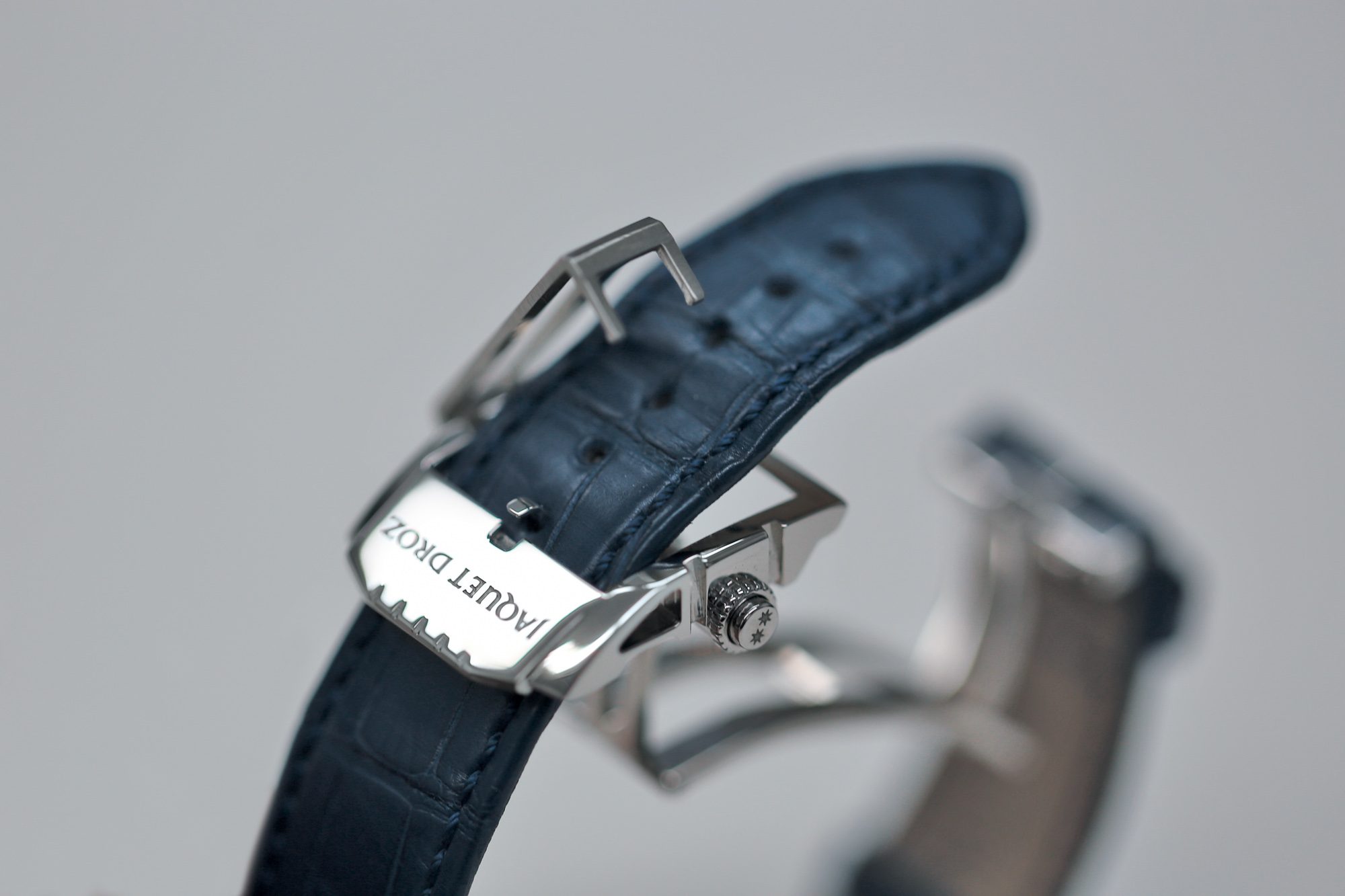 The Jaquet Droz SW Chrono in blue (Ref. J029530201; there are also versions available with a black rubber- treated dial or an anthracite gray dial, both with matching straps) is a luxury sports watch with an emphasis on luxury. With its many non-functional flourishes (and its somewhat imposing price tag of `11.16 lakh approx.), no one is going to mistake it for a classical “tool watch.”But it should appeal to horophiles looking for an elegant conversation- starter timepiece that is still suitably masculine and possessed of horological gravitas. While it cannot yet claim the collectors’ cachet of a Royal Oak, a Nautilus, or a Speedmaster, the SW collection continues to forge its own distinctive identity.