Reference 5930 from Patek Philippe combines a patented world-time mechanism with an in-house, self-winding chronograph calibre. We take a close look at the new World Time Chronograph with a white-gold case and an updated blue guilloché dial. Written by Martina Richter & Photos by Marcus Krüger and Patek Philippe.

Taking the world’s time zones for granted would simply be folly. A system to regulate time zones worldwide was first proposed by Sir Sandford Fleming, a Canadian railway surveyor and engineer, in 1879. He was also instrumental in convening the International Prime Meridian Conference in 1884, which recommended dividing the world into 24 one-hour time zones, each measuring 15 longitudinal degrees. The difference between each zone would be 60 minutes or one hour. The conference designated Greenwich as the prime meridian and as the standard of reference for time reckoning. 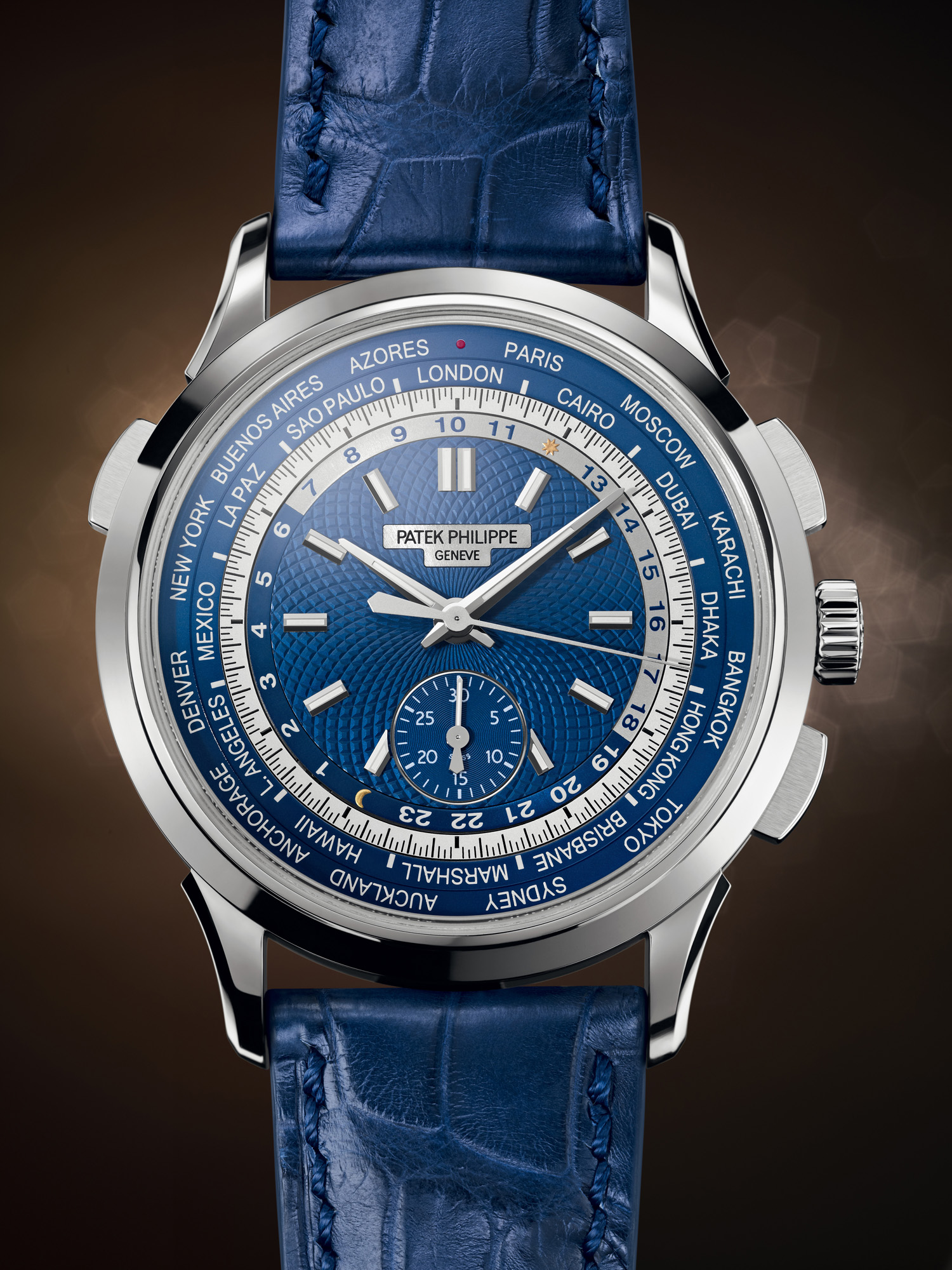 In actual practice, time zones are not determined by longitudes alone. More often, political considerations determine the time to be used in a particular

"Times in the other 23 zones can then be easily read via the local time track and the 24-hour track, whose colour shows whether it’s day or night in the specified region. When travelling from one zone to another, just press the correction pusher at 10 o’clock to adjust the setting. The hour and minutes hands will always show the correct time in the zone represented by the city shown at 12."

region. Countries that cover large territories from east to west have several time zones, such as Canada with five, the United States with six and Russia with 11. And if that weren’t complicated enough, from 2010 to 2014 Moscow reduced the number of its time zones to nine, and in 2011 switched permanently to summer daylight saving time. Then in 2014, the country began observing standard time again for the entire year, along with a return to its earlier division into 11 time zones. 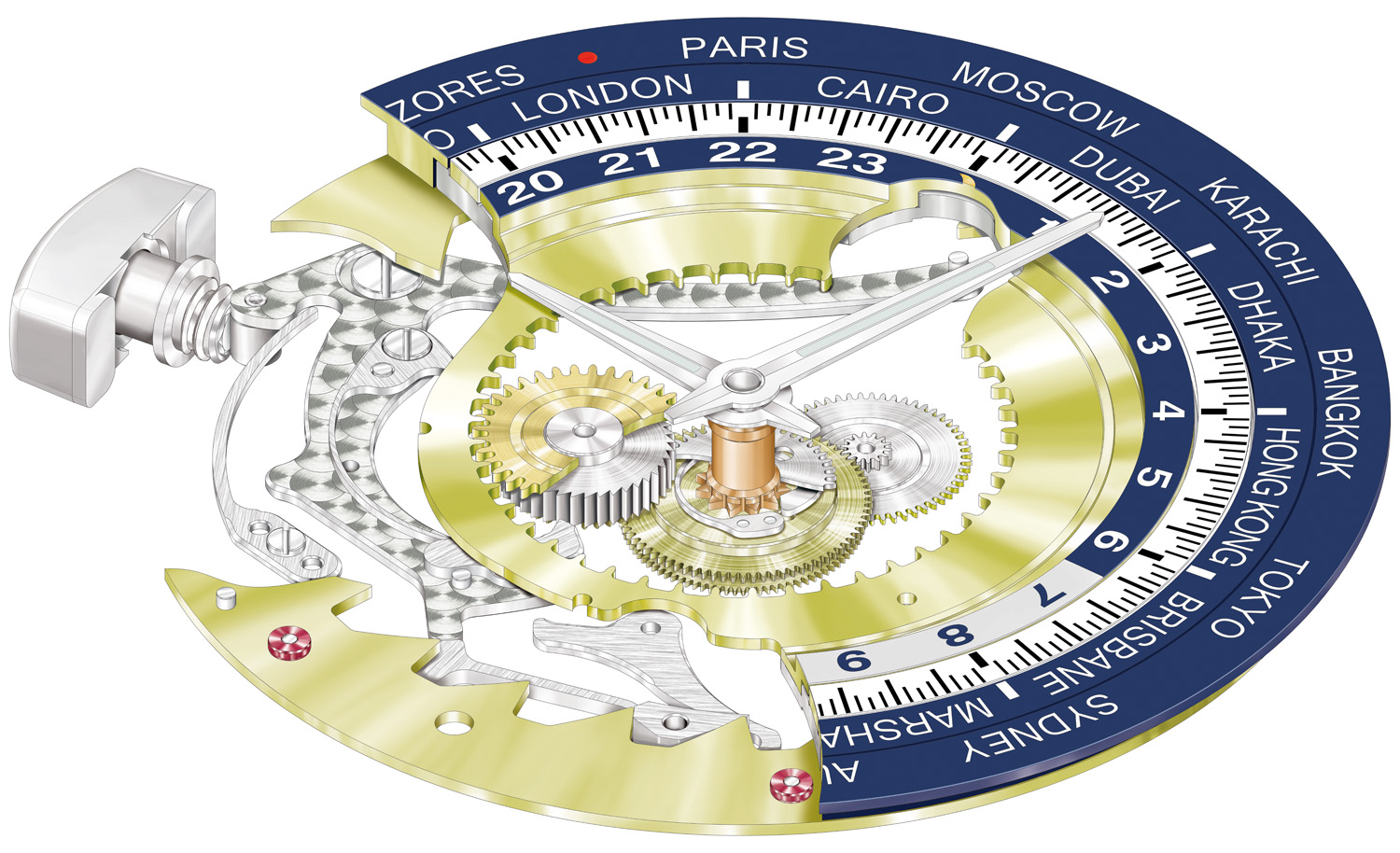 A total of 24 cities are listed on the outer- most blue disk, each representing one of the world’s 24 time zones. The innermost ring is divided into 24 hours with a day/night indication: Light numerals on a dark blue background with a moon symbol at midnight shows the nighttime hours and blue numerals on a light back-ground with a sun symbol at noon shows the day-time ones. When the watch is running, this 24-hour ring advances counterclockwise while the city disk remains stationary. 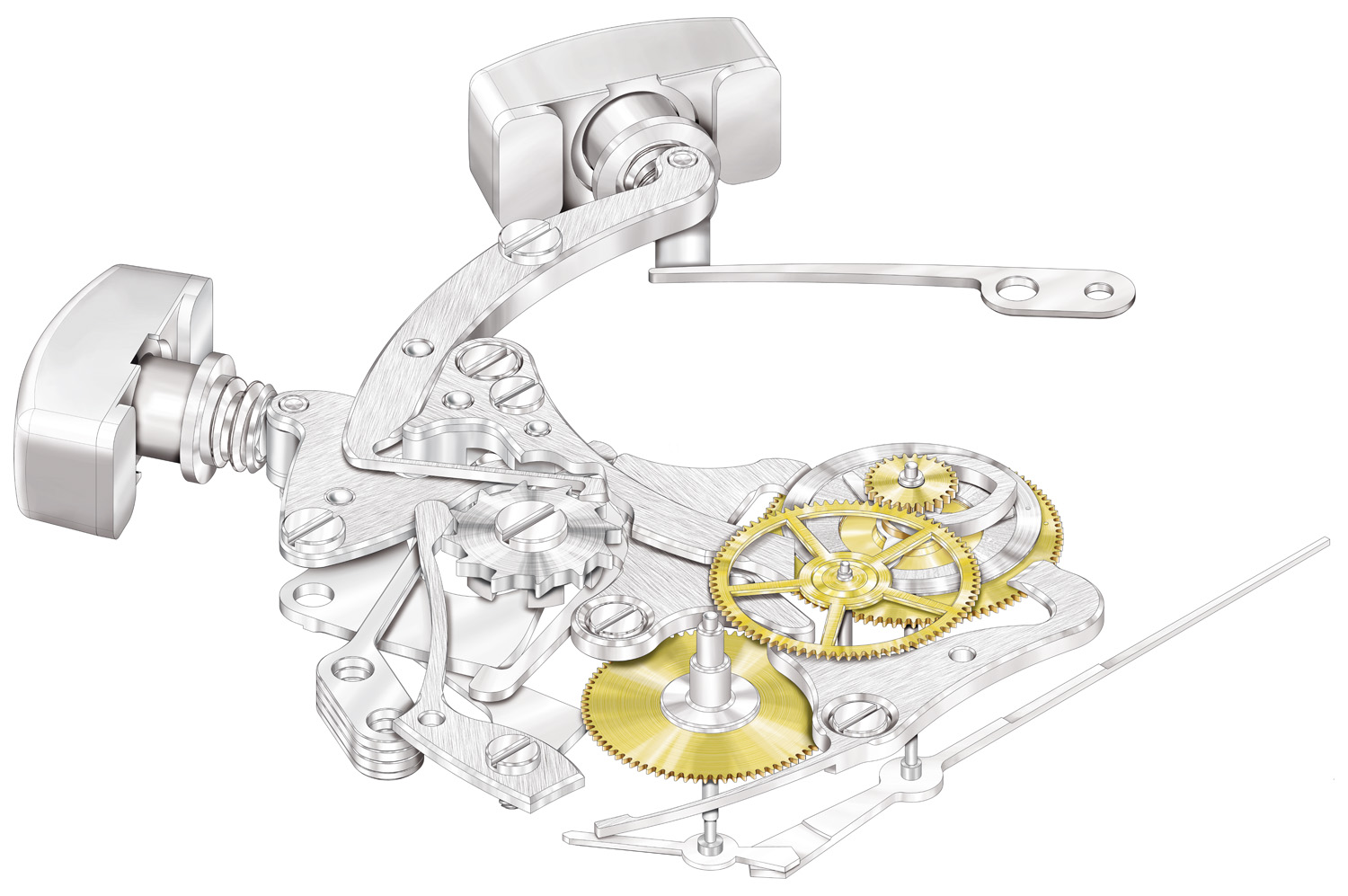 The rectangular pusher on the left side of the case is used to set the watch. This advances the local and 24-hour disk counterclockwise in one-hour increments. The hour hand also advances counter-clockwise. The city associated with the desired time zone must be at 12 so the hour and minutes hands show that city’s local time on the main dial. The crown is used to set the correct time. Times in the other 23 zones can then be easily read via the local time track and the 24-hour track, whose colour shows whether it’s day or night in the specified region. When travelling from one zone to another, just press the correction pusher at 10 o’clock to adjust the setting. The hour and minutes hands will always show the correct time in the zone represented by the city shown at 12.

During the setting or correction process, the world-time mechanism and the hour hand are disengaged from the movement via a complex click mechanism and a double hour wheel. The minutes hand, however, continues to advance without interruption and the amplitude of the balance wheel remains stable. If the chronograph is on, its function will also be unaffected. While Reference 5930 has no seconds display, you can use the continuously running stopwatch hand for this function because power is transferred to the chronograph via a low-friction vertical clutch without depleting the power reserve or disturbing the rate accuracy. 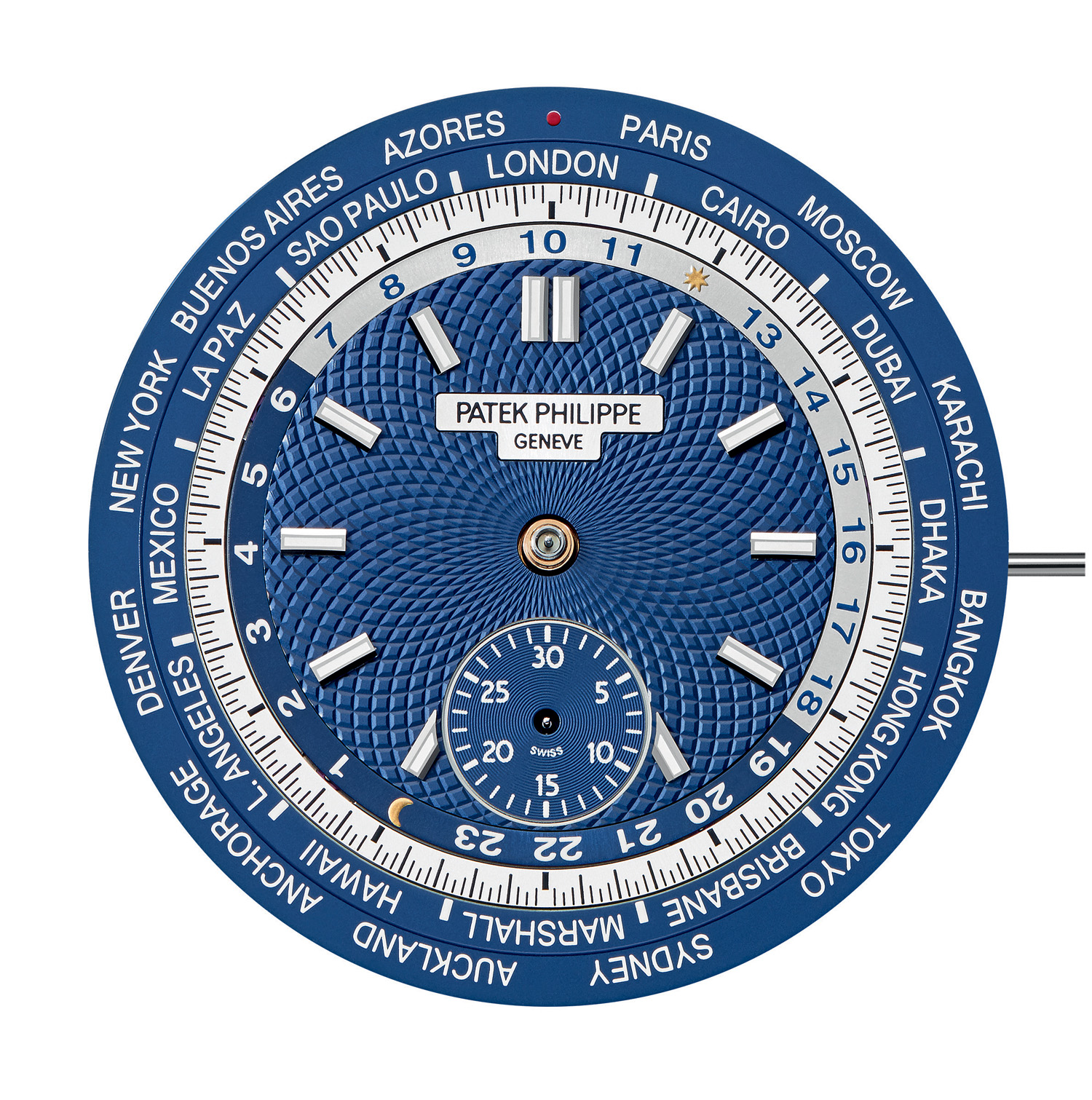 In a simulated wearing test with the chronograph on, we found a gain of 1.5 seconds per day. This corresponds to the measurement on the timing machine under the same conditions. But we found that the watch doesn’t run as well with the chronograph function off. And we saw a minor slowing of the timepiece on the timing machine, both when fully wound and after running for 24 hours without adding power.

The seconds track, which is usually on the outer edge of the dial, is a white ring that is located between the city ring and the 24-hour numeral ring. A thin stainless-steel trotteuse (chronograph hand) meets very precise quarter-second markings. This corresponds to the balance frequency of automatic Calibre CH 28-520 HU of 4 Hz, making time recording possible to 1/8 second. The minutes counter for the chronograph has highlighted 5-minute markings and is located at 6 o’clock, within the inner part of the blue dial with hand-applied guilloché finish. The bar-shaped minutes counter hand rotates continuously around the finely drawn and simple sub-dial. It is powered by a transmission that originates from the chronograph seconds wheel, so it is not advanced at the full minute, as is usually the case in chronograph mechanisms. The basis for the CH 28-520 movement with column-wheel control and vertical clutch as well as a world-time mechanism goes back to a design created by Geneva watchmaker Louis Cottier in the 1930s. Patek Philippe updated the design and patented two new developments in 1959 and 1999. Until now, Patek Philippe’s world-time chronographs have only existed as individual creations, but Reference 5930 is a 21st-century, state-of-the-art watch that is part of the brand’s regular collection.

"The chronograph also has a flyback function, which allows for a new timing interval to be started during an ongoing measurement without having to stop and reset the mechanism."

Extensive redesigns were needed to connect the chronograph movement with the world-time mechanism, which required working with tolerances of 1/100 mm. Posts were repositioned, bridges were levelled and redesigned, and spacings were changed to the extent that Calibre CH 28-520 HU can now be viewed as a new movement. It also unifies traditional watchmaking and modernity from Patek Philippe and the stringent demands of the Patek Philippe seal to achieve thinner, more elegant watches and, above all, functional construction: the golden-coloured Gyromax balance wheel with its patented blue-violet Spiromax balance spring made of Silinvar, a 21k-gold oscillating weight with its single-sided winding action that can produce up to 55 hours of power reserve using the column-wheel chronograph including vertical clutch, and finally the fine finishes, crowned with the in-house quality seal. The circular côtes de Genève pattern that transitions from the gold oscillator to the silvery rhodium-plated bridges; the gold-enhanced engravings; and the bevelled edges and chamfered, polished bore holes can all be admired through the transparent sapphire caseback. And from a technical point of view, smooth operation goes along with the modern design and materials. Setting the time zone is as simple as promised, but it has one minor drawback: It can be advanced in one direction only, so it may be an advantage that there is no date display that must be synchronised with time-zone setting.

The chronograph also has a flyback function, which allows for a new timing interval to be started during an ongoing measurement without having to stop and reset the mechanism. The large rectangular pushers have different release points: Start and stop using the pusher at 2 o’clock has a nice firm feel. The pusher at 4 o’clock used for the flyback function and to reset the chronograph offers more resistance but is not problematic. The crown with its Calatrava cross emblem is easy to use thanks to its pronounced grooves; it can also be easily pulled out to set the hands.

The watch’s operating elements are made of white gold, like the 39.5-mm case. The sides of the pushers and a portion of the sapphire caseback have a fine, brushed finish. While the 12-sided sapphire caseback frame permits a fascinating view of the movement, the steeply sloping bezel gives the navy blue dial ample space. The time is displayed inside the world-time and chronograph disks with faceted white-gold dauphine hands pointing to applied white-gold hour markers. SuperLumiNova accents make it easy to read the time at night.

A high quality, hand-stitched alligator strap is set into wing-like lugs that recall the trendsetting world-time watches of the 1940s. The strap is dyed the same navy blue as the dial and ends in a white-gold folding clasp. But the high price and rarity of the Reference 5930 World Time Chronograph from Patek Philippe will limit the number of people who have the pleasure of wearing this watch.