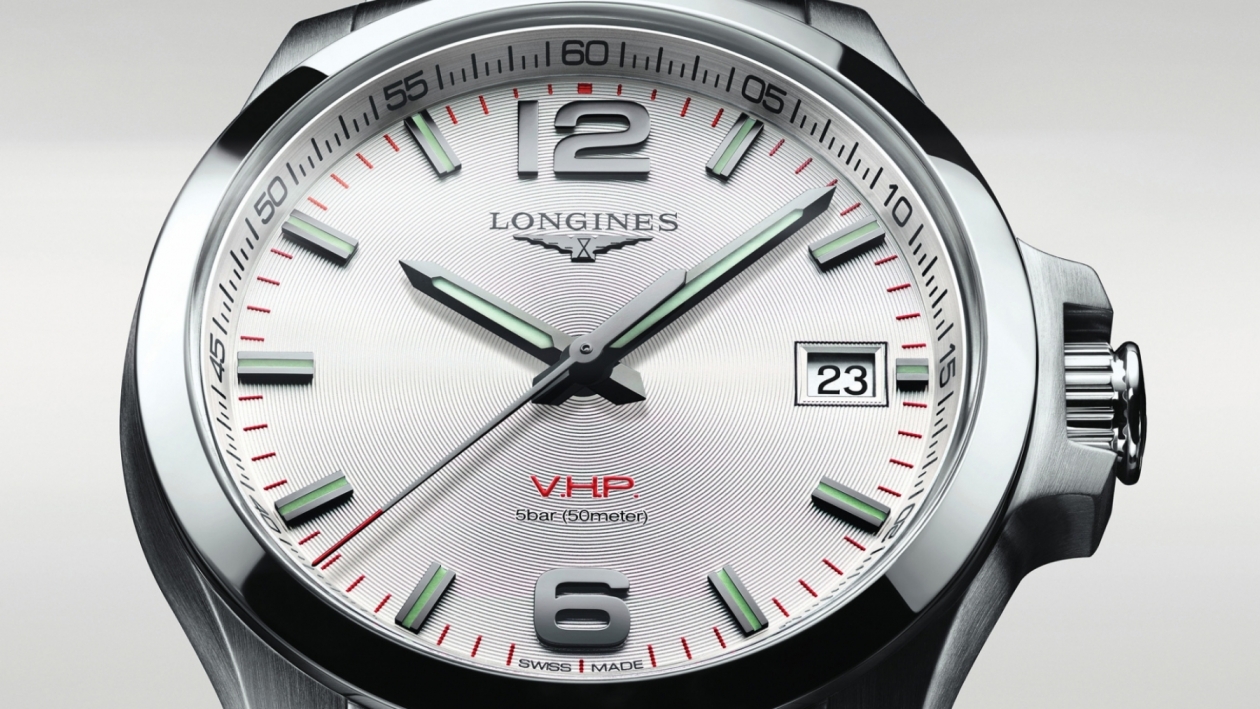 The Longines Conquest V.H.P. doubles down on the pursuit for Swiss precision. By Logan R. Baker, WatchTime

Let's get something out of the way. The watch I'm about to review is a quartz watch, Which while a major part of the Swiss watch industry, is something we don't typically cover at WatchTime. If you appreciate the difference between quartz and mechanical timepieces and the place they occupy in horology, then read on because the Longines Conquest V.H.P. is one of the most fascinating quartz introductions in years.

Last year’s V.H.P. (Very High Precision) resurrected a long under-appreciated aspect of Longines’s history. You can count on one hand how many brands have manufactured watches as long as Longines – they’ve been continuously active since 1832. The V.H.P. first entered the horological lexicon in 1984. That year, Longines introduced Caliber 276.2 that used thermocompensation to achieve a rate of plus or minus 10 seconds per year.

Over the next decade plus, there were a few minor changes to the collection, namely the second oscillator was replaced by a thermistor module (Caliber 237.2), but the V.H.P. mainly stayed its course as a high-end quartz offering for the brand. During that decade, the Swiss watch industry was still recovering from a loss of identity brought on by the Quartz Crisis. This is the reason you saw brands like Rolex introducing the OysterQuartz – if you were a luxury watch brand and you didn’t have a high quality take on a quartz model there was a legitimate fear that you were going to miss out on not only the dominant trend at the time but also what looked like “the future” of the watch industry. In response to those fears, Nicolas Hayek transitioned the struggling ASUAG and SSIH into the Swatch Group and the age of conglomerates in the watch industry was born. 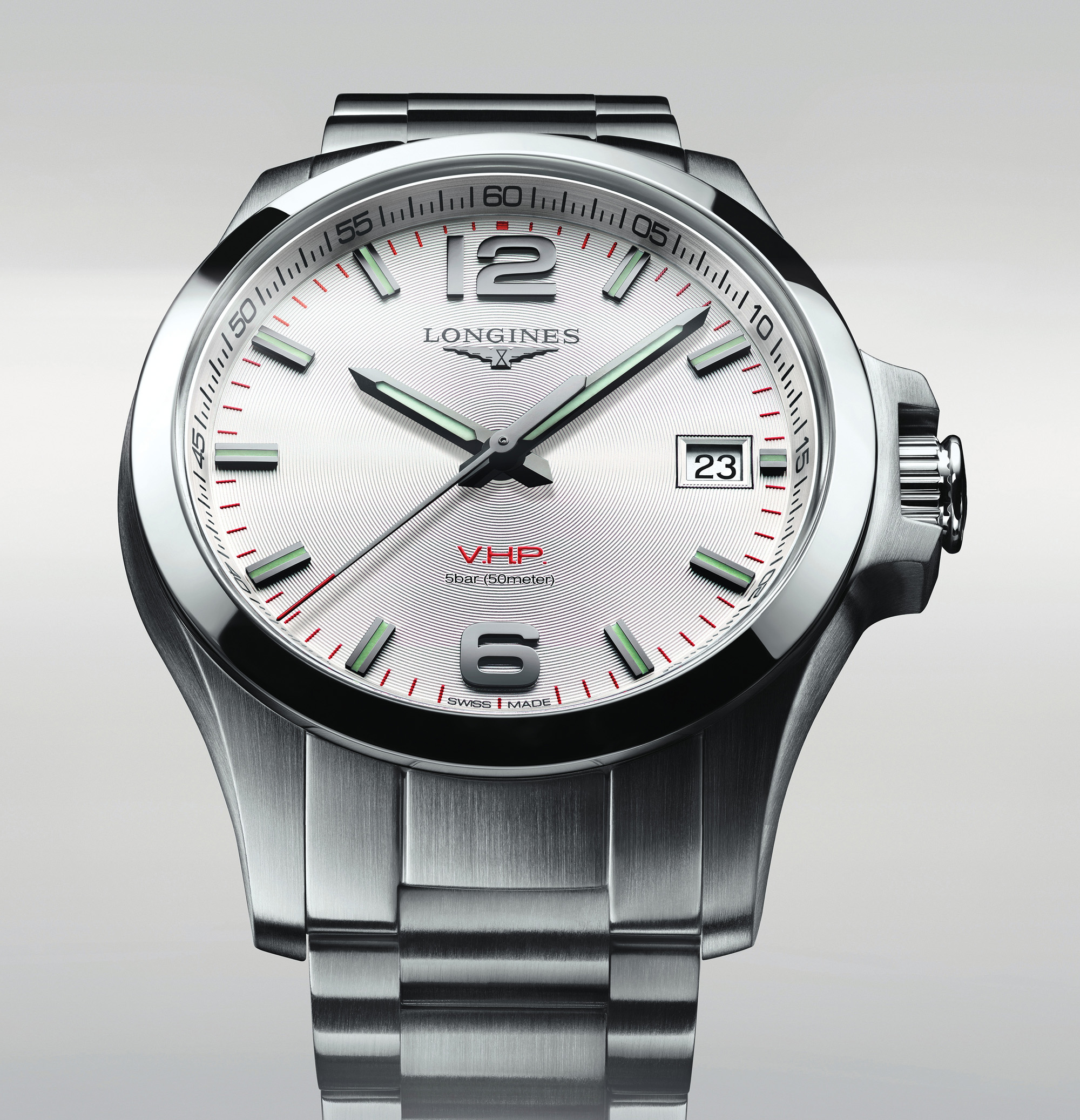 In1996,we saw the last iteration of the ConquestV.H.P. Perpetual Calendar with a new ETA-developed movement with a digital calibration terminal that continued using thermocompensation and introduced a perpetual calendar date and a 3V lithium battery that was supposed to last for a decade. Which it technically did – the Conquest V.H.P. Perpetual Calendar was officially discontinued around 2006/2007.

After that lineup completed its run, the V.H.P. lay dormant in the eyes of many watch enthusiasts. Occasionally you would see one pop up for sale on HAQ (High Accuracy Quartz) forums and it would quickly change hands as one of the progenitors of HAQ fascination. In the two decades that passed between the 1996 model and the latest V.H.P. that was introduced at Baselworld 2017, we’ve seen this small segment burst in demand with a few brands throwing their hat into the ring to corral that interest into a single following. During that time, the most successful came from Japan. The Grand Seiko 9F caliber might be the most well known, while Citizen-owned Bulova has the UHF (previously known as the Precisionist) line that is a fan favorite thanks to its variety of styles, general affordability and accuracy. Swiss brands that have introduced hyper-accurate quartz models include Breitling with the Superquartz line and Omega with the Spacemaster watch. The issue with those is that they don’t approach the same accuracy as the V.H.P. at 5 seconds per year and often utilise an analog-digital display that might take some getting use to for traditional watch lovers. It’s actually Citizen who is the only other watch brand to reach the same level of accuracy as Longines does with the V.H.P. Colloquially known as “The Citizen,” the watch was a Japan-only model until very recently and held the record for most accurate quartz watch when it was introduced in 2011.

While “The Citizen” has long been the go-to option for fans of high-accuracy watches with internal regulators, the fact that it was only available in Japan made it somewhat of a myth among American and European enthusiasts. The Longines Conquest V.H.P.’s victory is twofold: it has made watches that are accurate by 5 seconds per year more accessible both price wise and through production capacity.

The movement inside the Conquest V.H.P. – dubbed Caliber L288.2 in its three-hand-with-calendar version and L289.2 in the version with chronograph functions – is not only notable for its high degree of precision but also for its use of a GPD (gear position detection) system that quickly resets the watch’s hands after an impact or exposure to a magnetic field. Longines has also equipped the movement with an exceptionally long battery life of nearly five years and, like its 1990s predecessor, a built-in perpetual calendar.

The time-and-date-only models of the Longines Conquest V.H.P. are available in 41mm and 43mm- diameter stainless-steel cases; the chronograph models are in 42mm and 44mm-diameter stainless-steel cases. Black, white, blue or carbon dials are available for all models, with two applied Arabic numerals at 12 and 6 o’clock (the chronograph model has only the “12,” with the “6” replaced by a subdial) and nine applied bar indexes, treated with Super-LumiNova, for the remaining hours. All the dials are graced with a red “V.H.P.” inscription, either directly above or directly below the center; the cases are water resistant to 50 meters.

The chronograph dial has a tri-compax layout with a 30-minute counter at 3 o’clock, a 12-hour counter at 9 o’clock, and a 60-second counter in the center. Along with the GPD, each model incorporates an “intelligent” crown to set and change the time and date, and an E.O.L. (end of life) indicator to signal when the battery is close to dying. This means that when the energy in the battery nears its end, the seconds hand warns the owner by jumping in 5-second rather than 1-second intervals.

It’s almost surprising to see such a wide variety of colors and sizes released with the start of a new collection. Longines Vice President Juan-Carlos Capelli says this was intentional as was the choice to position the V.H.P. inside the Conquest line to reach a younger, more athletic generation.

“You have different sizes, different dials and colors, and your watch can fit a large part of the population,” he says. “At Longines, we like to say: ‘We have a watch for every wrist.’ And the Conquest V.H.P. collection was designed with that in mind. This movement is a nice addition to the rest of the collection.” 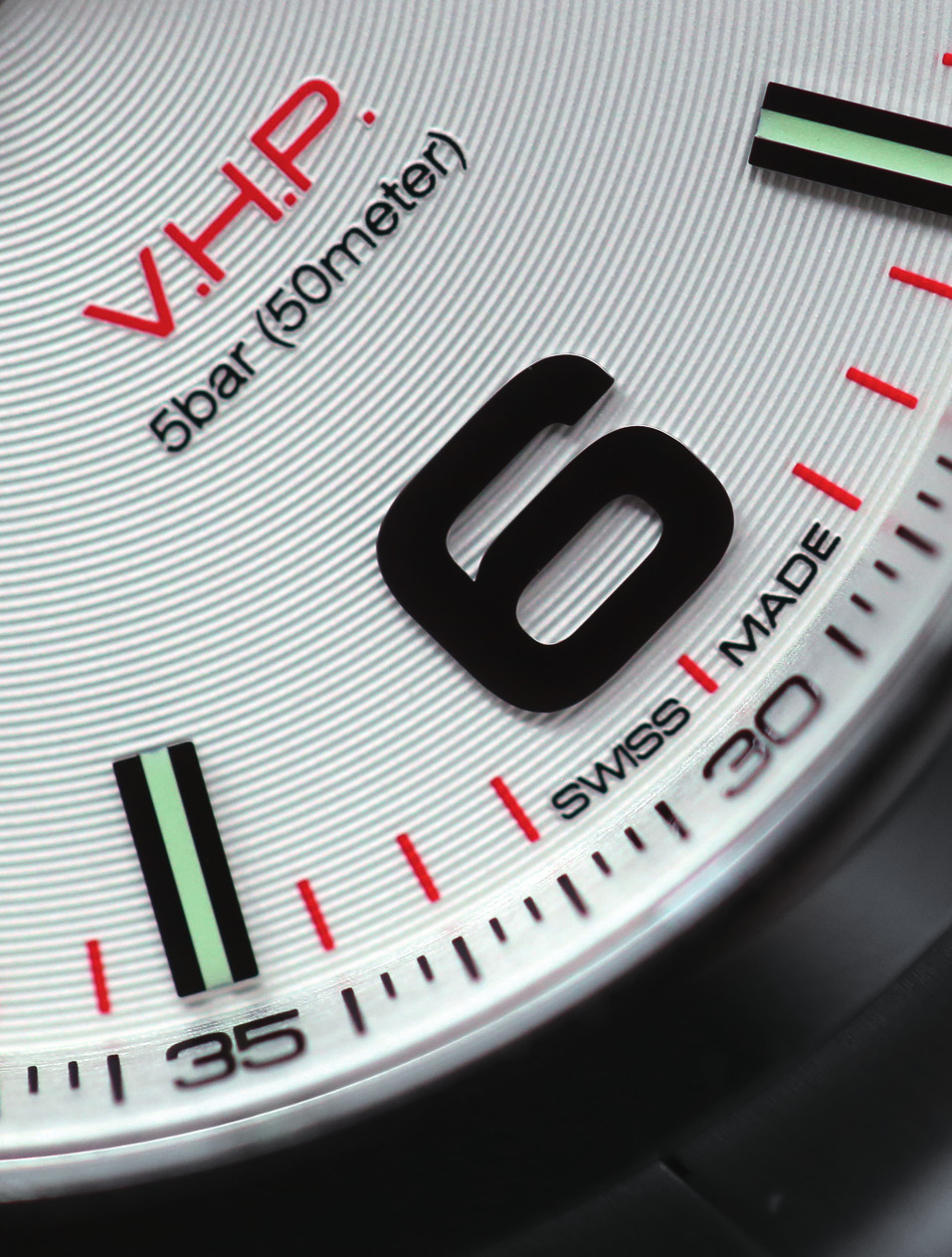 The watch I wore for a little over a month was a time-and-date-only version with a white dial. It has a peppermint-red minutes track that dotted between the applied lume hour indexes. The dial is fairly spartan otherwise. There’s a subtle stamped snailed pattern that looks nice enough under a loupe. The seconds hand has a red tip, I assume to match the seconds track. One thing that did save me a fair bit of consternation was the fact that the seconds hand matched up precisely to each marker on the seconds track as it ticked away. For those that spend hours looking at their watch, and might not be used to the jumping seconds hand of a quartz movement, there’s nothing more frustrating than a seconds hand that skips just slightly over its projected landing spot. Usually, if given the choice, I opt for a smaller model given my elfin wrist. This time around, I went all in with the 43-mm version to give the sports model a real test throughout the five weeks I wore it. Once receiving the watch, I was surprised how compact it felt against my skin. The lugs and bracelet had a seamless connection and while the stainless-steel link bracelet was fairly unexceptional, it was a breeze to take on and off thanks to the push-piece opening mechanism.

The most remarkable part of this watch – other than its accuracy, of course – is the gear disposition system. If you pull the crown out of the watch and wait for about 1 minute, the hour, minutes and seconds hands will snap to 12 o’clock. Once you push the crown back in, the hands spin around to the exact time it should be without a second lost. For example, if you pull the crown out and wait till the hands slide to the 12 o’clock marker at, say, 10:10:00; then wait for 90 seconds and push the crown in, the hands will spin around and automatically adjust to 10:11:30 in a dizzying display of motion. It’s a great party trick and I had quite a few of my horologically inclined friends in shock when I showed it to them for the first time.

Thanks to the smart crown system, the hours and minutes actually adjust in one-hour leaps with a sweep of the crown. Longines figures that given the watch’s hyper-accuracy, the only reason to change the time would be for traveling between time zones or adjusting for daylight savings time. However, in case you do need to change the minutes for a photo opportunity or for any other reason, you can adjust the crown slightly so that the minutes and hour hands will creep forward like a traditional watch. 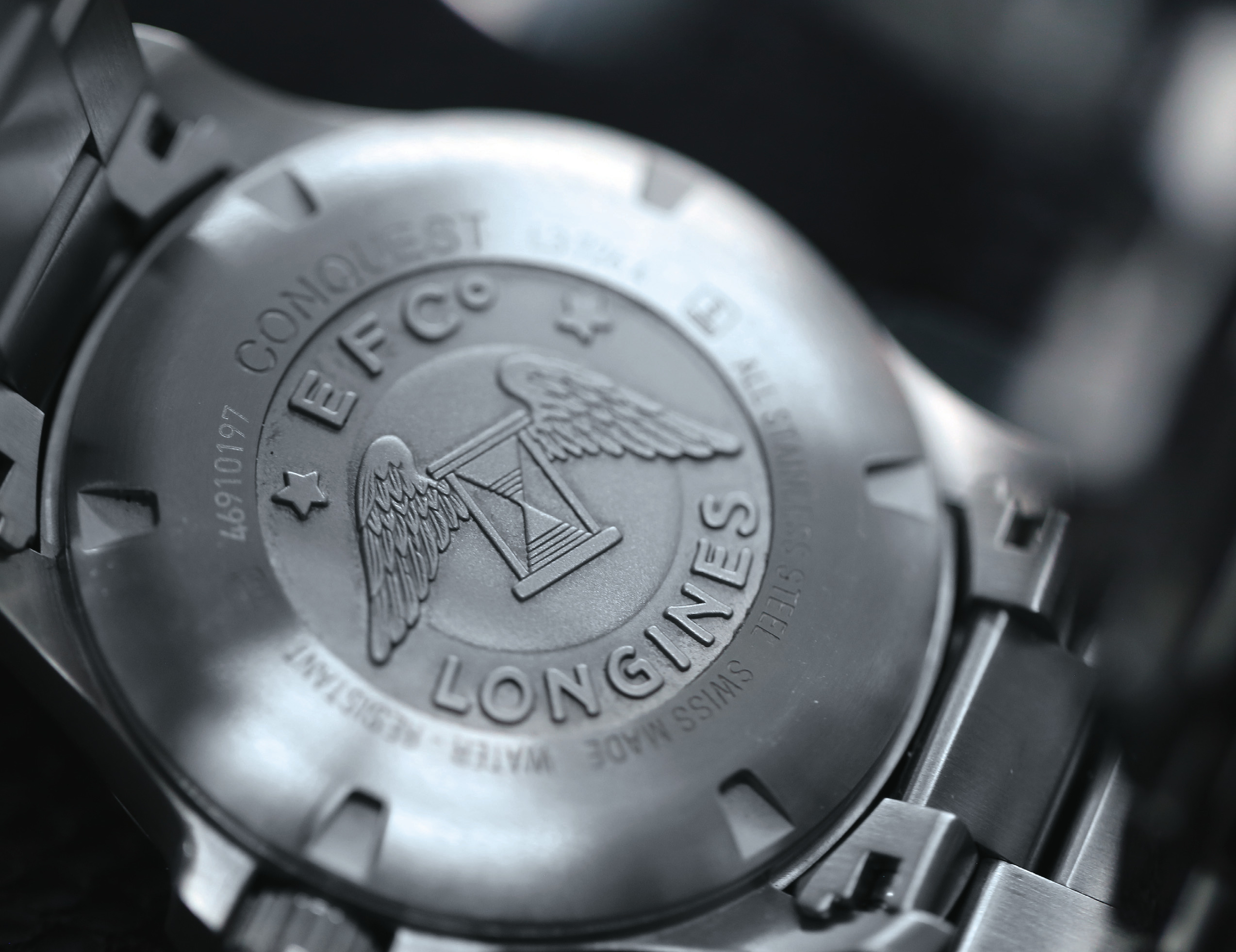 When I asked Juan-Carlos Capelli if this was Longines’s answer to a smartwatch, he pretty emphatically said it was not. “We are doing watches and not electronic goods; we try to do the best of what we know how to do as watchmakers ... we had to make a real Swiss product,” he says. “With Longines, the movement is always 100-percent Swiss. We don’t want to add something from outside that world so we decided to make a modern watch without any constraints.”

Personally, I believe him. If you look around at the watch industry today, there are so many brands that are jumping on the smartwatch bandwagon and chasing the dollar without focusing on what they have been doing – in some cases – for hundreds of years. The Longines V.H.P. fits firmly into both Longines’s heritage and the brand’s modern approach to watchmaking. It looks good, is comfortable to wear, and is, quite possibly, the most accurate Swiss made watch ever. Even if you’ve never owned a quartz watch in your life, the V.H.P. deserves attention for its worthy pursuit of hyper-accuracy in the always exciting world of Swiss watchmaking. 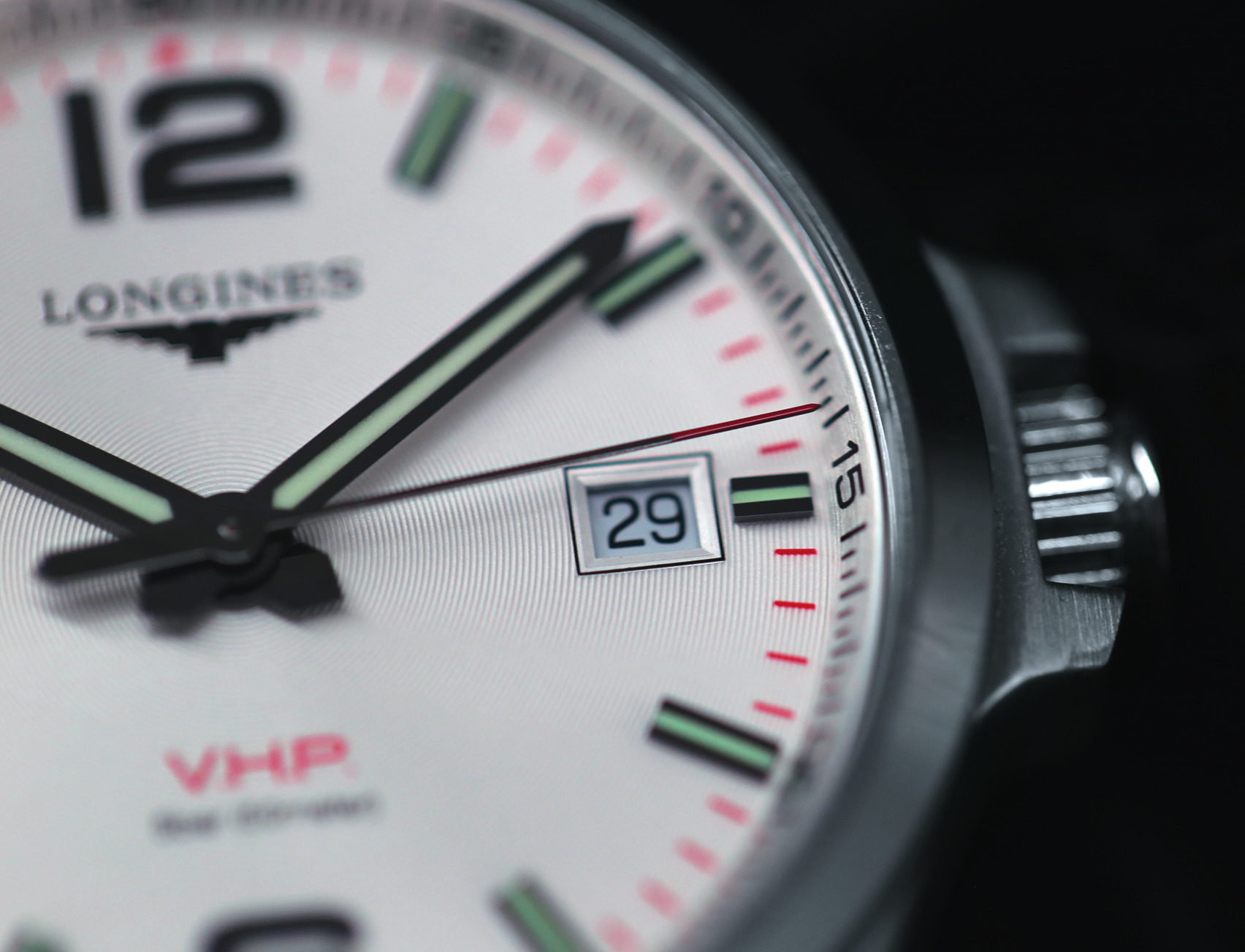