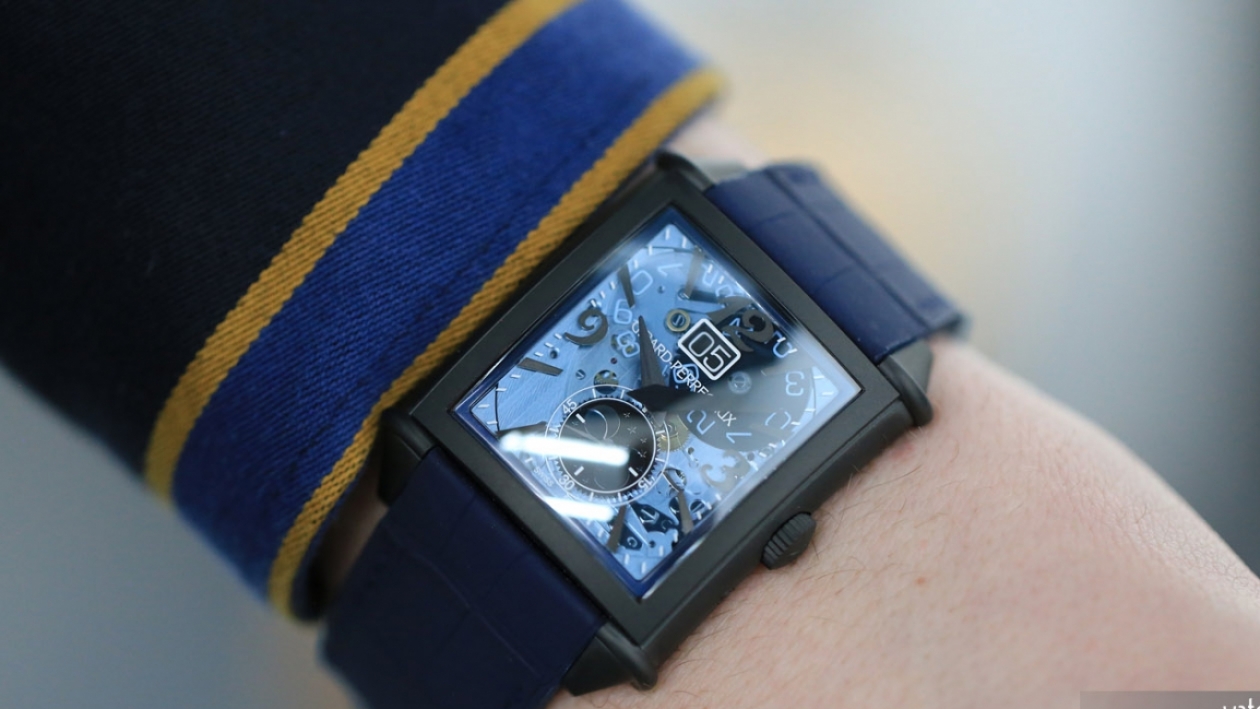 At SIHH 2019, Girard-Perregaux announced a unified theme for its 2019 collection, which it called “From Earth to Sky” and which was defined by the use of a very cosmic-looking combo of black titanium DLC for the cases and translucent blue for the polycrystalline dials. One of the standouts (for me, anyway) of these stellar new models hails from the most distinctively retro of the brand’s collections, the Art Deco-influenced Vintage 1945 series. 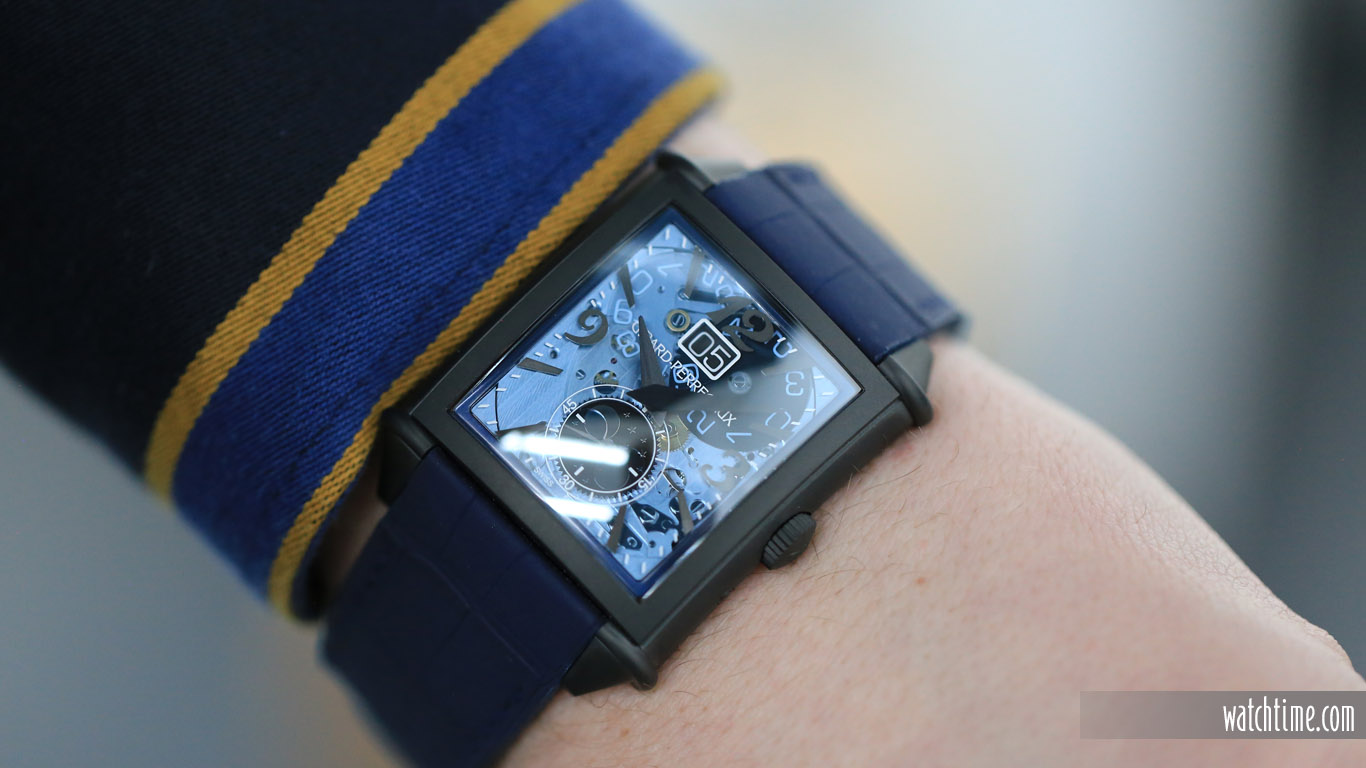 The watch, officially dubbed the Vintage 1945 Earth to Sky Edition and essentially a reworking of a 2014 model, the more conventionally named Vintage 1945 Large Date Moon Phases, is an interesting amalgamation of an early 20th-century rectangular case and dial design with definitely modern materials and aesthetics. Like its predecessor, it hosts a rare combination of an oversize date display, in a single rectangular window at 12 o’clock, and a moon-phase indicator, overlapped by a small seconds hand, in a circular aperture at 6 o’clock. The Earth to Sky Edition also repeats the original model’s “smoked” tinted sapphire crystal providing an elegantly shrouded view of the mechanisms inside, including the gears, wheels, and disks that drive the two featured complications. Here, or course, the smoked effect is in blue rather than the original grey. 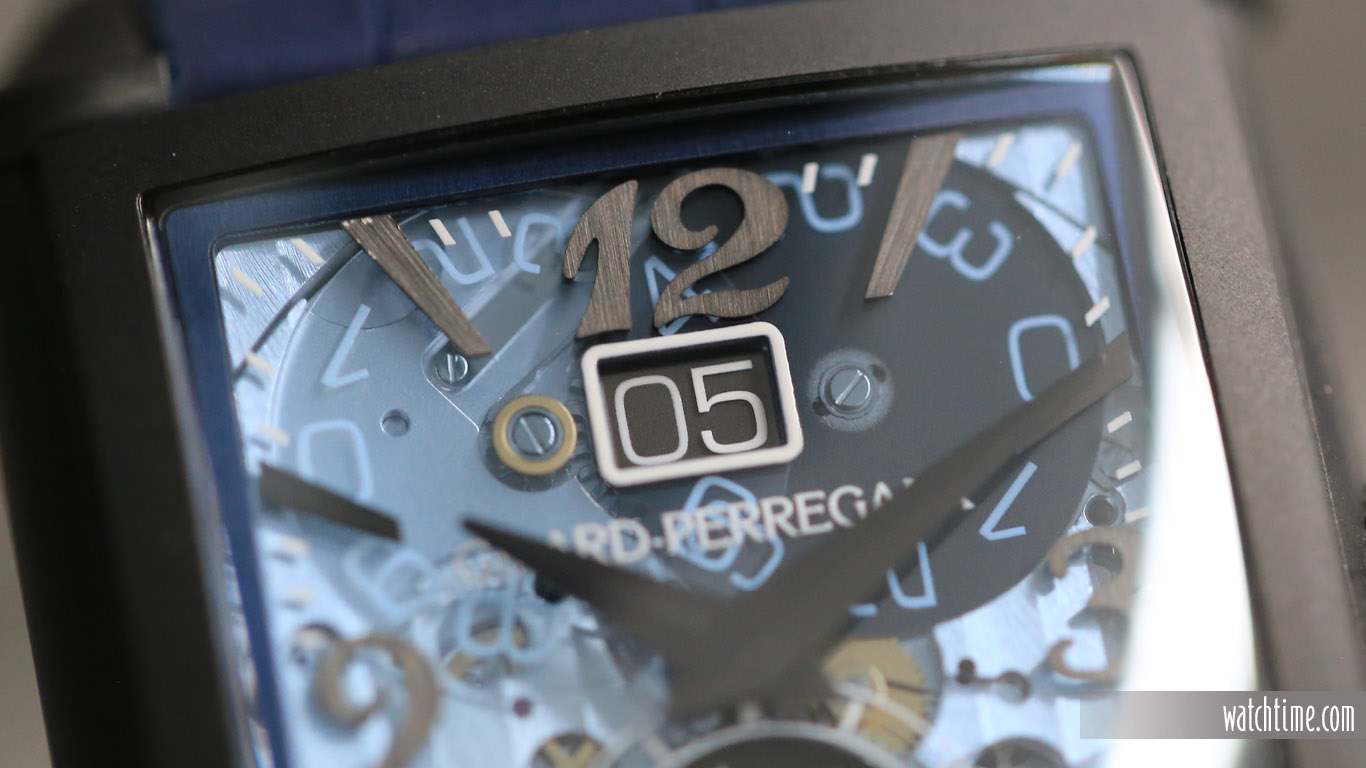 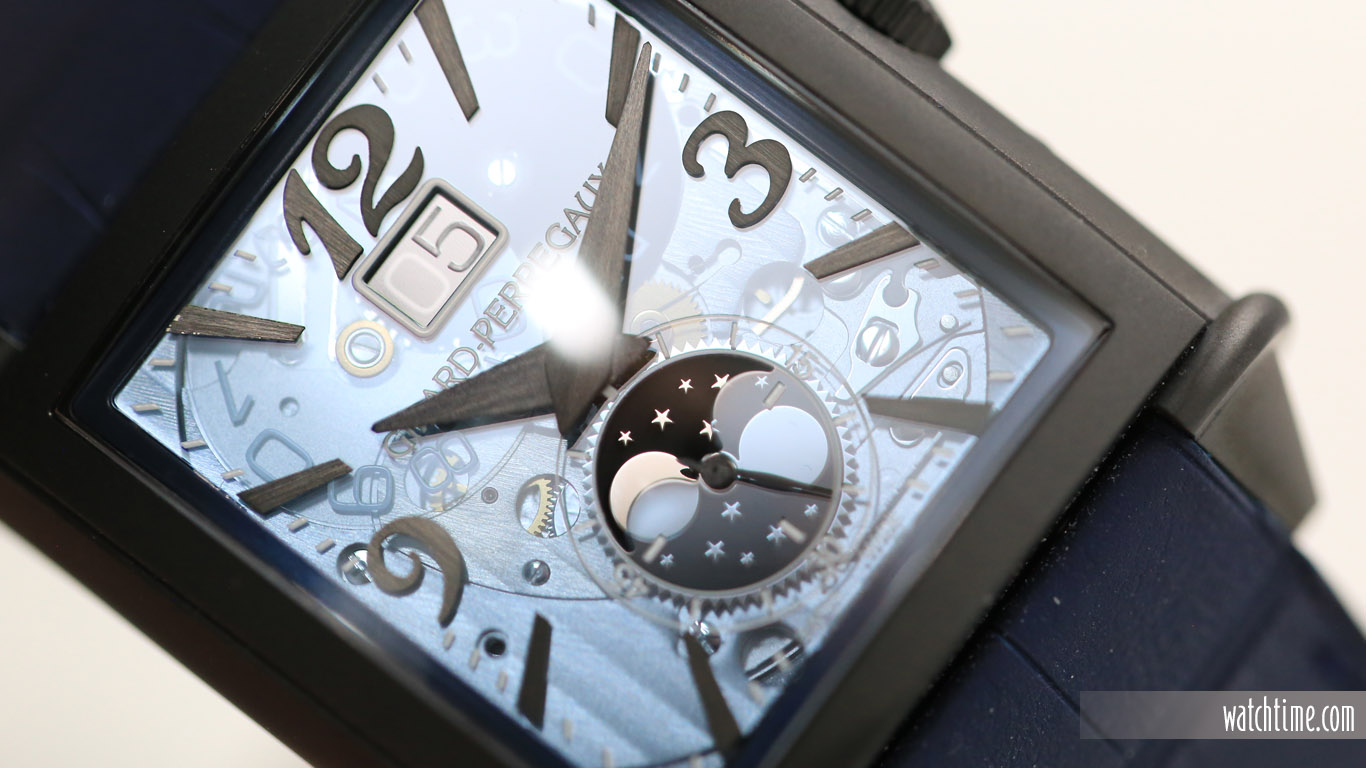 Like most big dates, this one places the digits on two separate disks, but uses an innovative design to minimise the “two level effect” that can detract from the visual harmony of such displays. One disk is made of clear sapphire, and positioned just .1 mm above the other disk, creating a nearly imperceptible difference in height, with the disks appearing to be essentially on the same level. When a date change is triggered, it takes only five milliseconds for the disks to move into place. The moon-phase display is co-axial with the small seconds, and it employs a transparent sapphire “double bubble” plate that reveals the mechanism beneath. The Art Deco hour numerals, indices, and Dauphine hour and minute hands are treated with a textured black PVD treatment that contrasts well, at least in fairly bright lighting conditions, with the blue dial and the shaded elements behind it; in dimmer conditions, the time can be a bit more difficult to discern at a glance, as the watch, in keeping with its ancestor, has no luminous treatment on any of its elements.

The Vintage 1945 case is, of course, based on those of historical Girard-Perregaux watches from the year it references, and remains one of my favourites in the Swiss brand’s portfolio. Rectangular in shape, but enhanced for elegance and comfort by compound curves that extend from top to bottom and from side to side, make this case not only period-appropriate at 36.10 mm by 35.25 mm in size, but ergonomically ideal for comfort on the wrist. If one gets past the visual incongruity of distinctly modern black DLC on a very retro-looking case, as I did quickly, one will likely learn to appreciate the aesthetic boldness employed here. 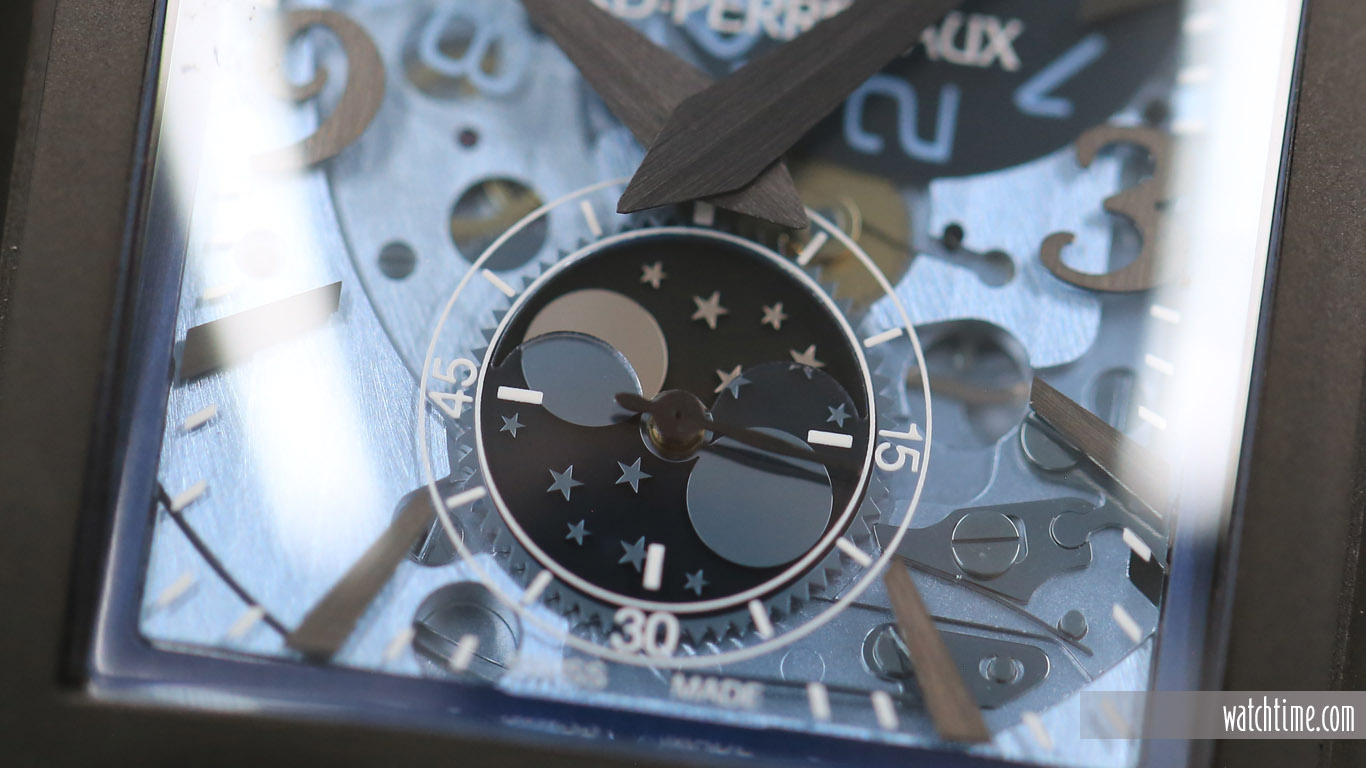 The round movement, Girard-Perregaux’s self-winding Caliber GP03300-0105, is not built to the case’s dimensions — such shaped movements are still exceedingly rare — but it is, as per Girard-Perregaux tradition, both meticulously engineered and decorated to the upper echelon of haute horlogerie standards. Accessible through the round window in the Vintage 1945’s caseback’s caseback, the movement is made up of 282 components, including 32 jewels, oscillates at a brisk 28,800 vph, and stores a minimum power reserve of 46 hours. The case, which despite the previously discussed retro shape maintains a respectable water resistance of 30 meters, is mounted on a blue rubber-coated alligator strap that secures the timepiece to the wrist with a black DLC-coated steel folding buckle. 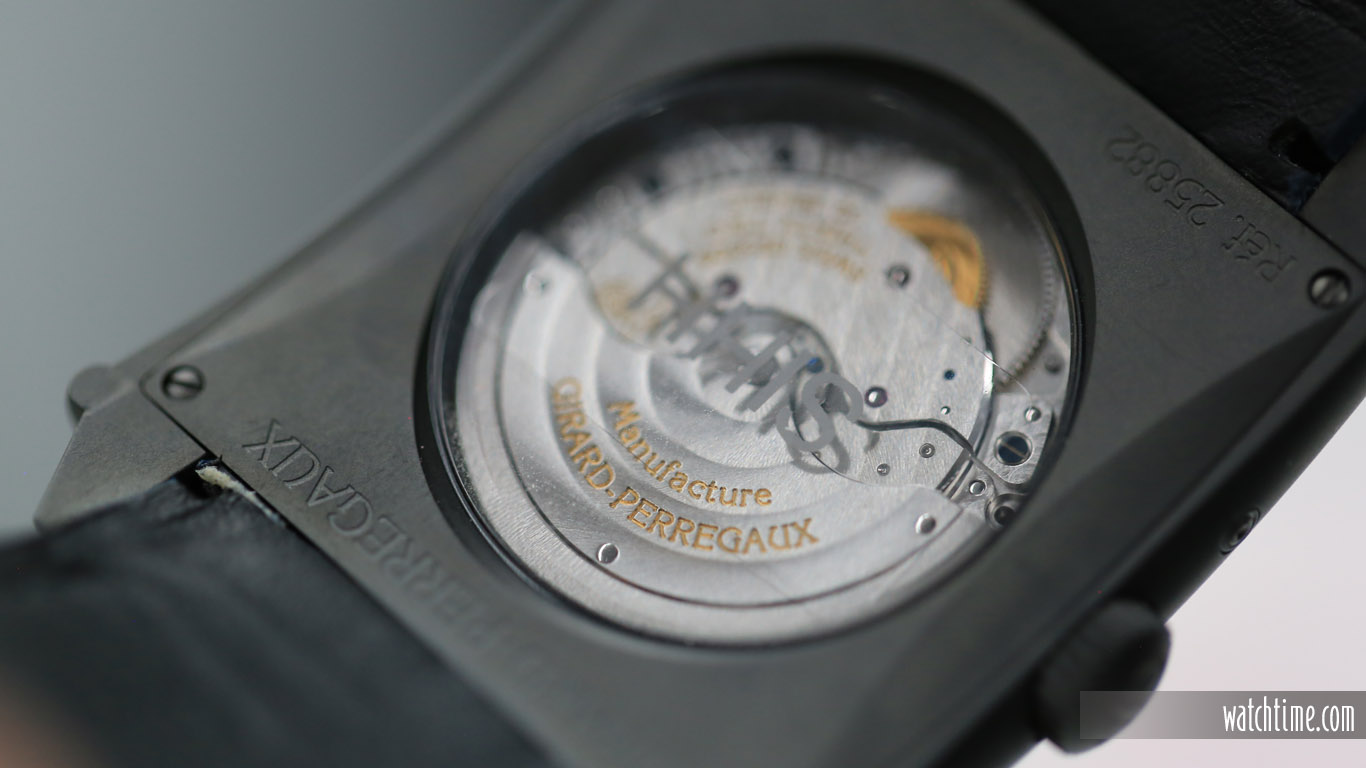 The Girard-Perregaux Vintage 1945 Earth to Sky Edition is priced at 17,300 Swiss francs (currently about $17,438) and available at retailers now.