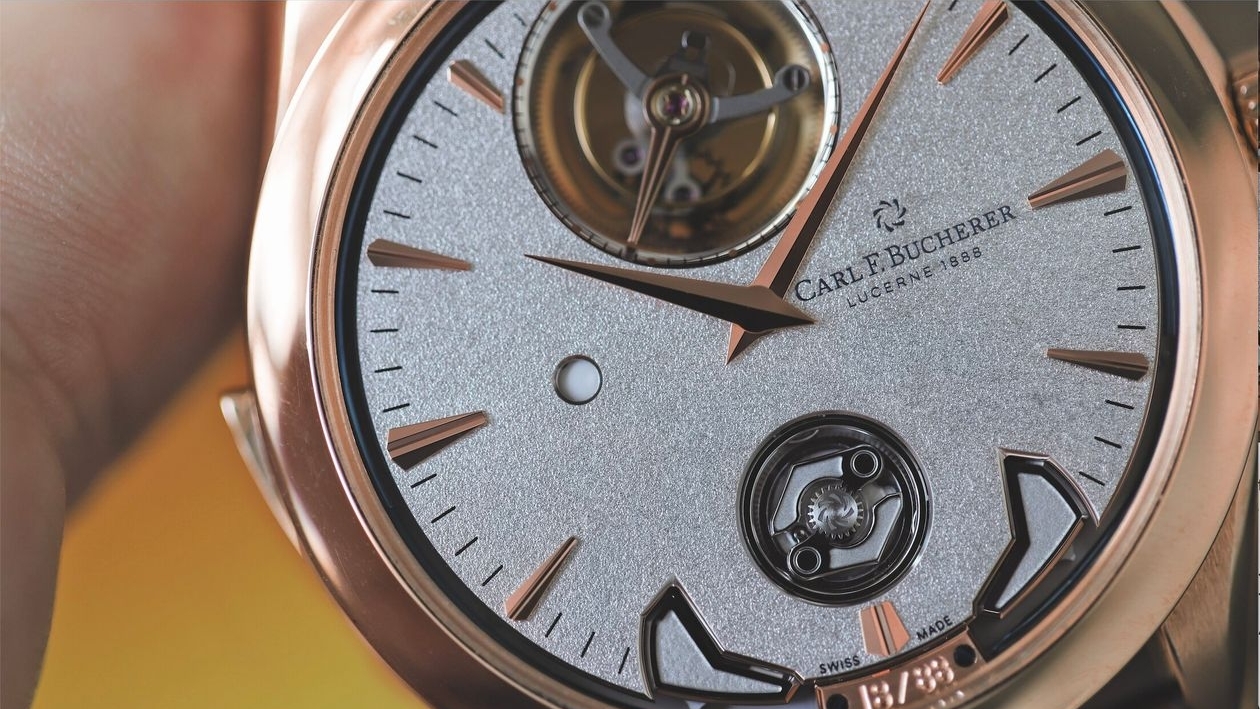 The new Manero Minute Repeater Symphony is Carl F. Bucherer’s most complicated watch to date. WatchTime conducted a verbal sound check with No. 18 of 88.

Carl F. Bucherer and the Lucerne Festival Orchestra not only share a hometown, they recently have teamed up for the premiere of the brand’s most ambitious timepiece yet. Sascha Moeri, CEO, Carl F. Bucherer, said, “A fine watch and a musical composition are similar in a number of ways. They are both created from many individual components that have to work together perfectly.” The Lucerne Festival’s Executive and Artistic Director Michael Haefliger seems to share his opinion, “A fine mechanical watch is a lot like a symphonic piece. They both reflect creative passion and combine art with craftsmanship. And each has the goal of stimulating an emotional response.” The watch in question, the Manero Minute Repeater Symphony (Ref. 00.10925.03.63.01), even has its own soundtrack, written by Swedish composer Lisa Streich and titled Periphery. 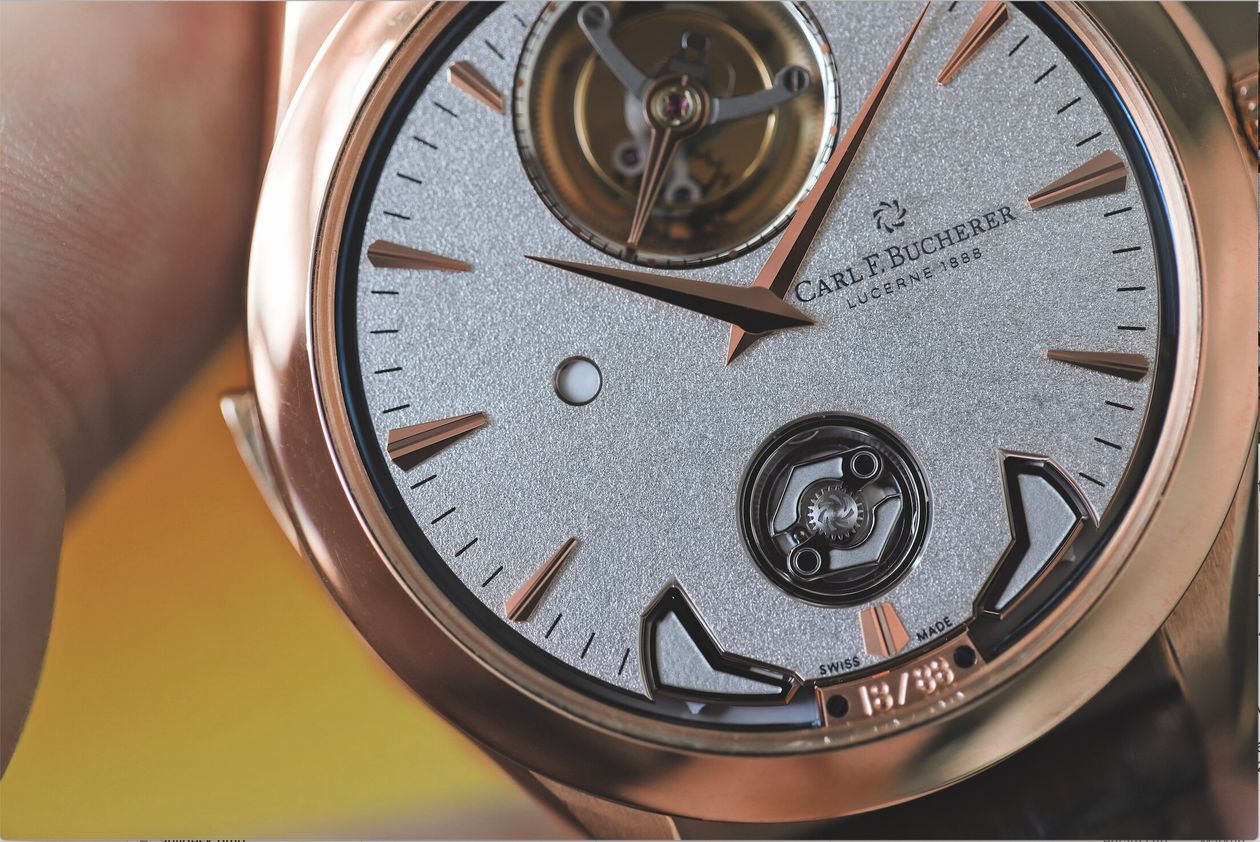 The project itself has already stimulated an emotional response internally: The brand’s new flagship model was to premier during Baselworld 2020, but had to be postponed due to COVID-19 and the show’s cancellation until Watches & Wonders Geneva in April 2021.

Since launching its first proprietary calibre, with its peripherally mounted winding rotor, in the Manero Peripheral timepiece, Carl F. Bucherer adopted ‘peripheral’ design as its technical stock-in-trade. “Our accomplishments in peripheral technology have become our flagship. When we secured our patent on the peripheral winding system back in 2008, it sparked the passion that ultimately led to the creation of this new watch,” says Moeri. 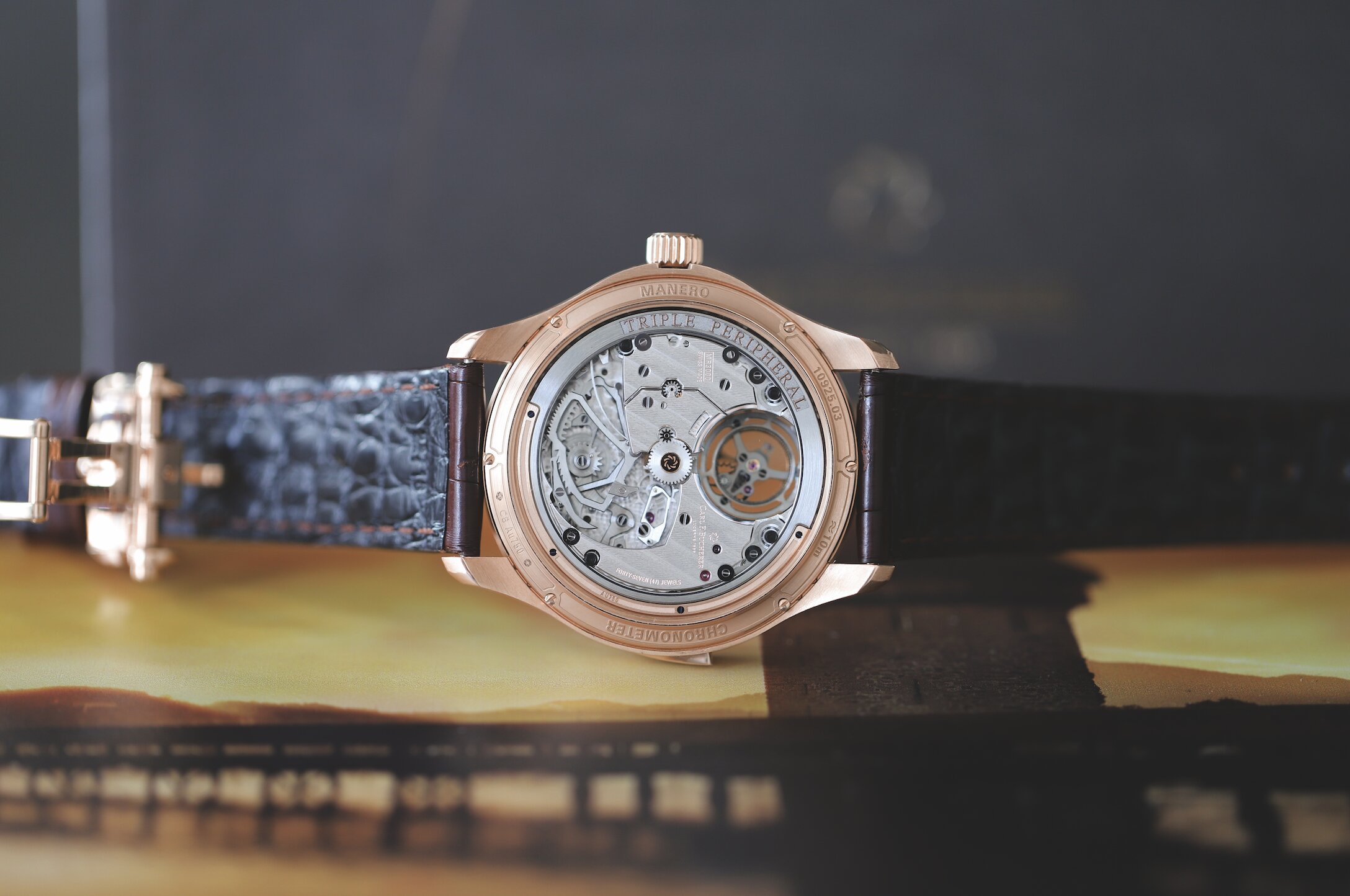 Similar to using a micro-rotor, this concept allows a mechanical movement to be thinner (which is why brands like Vacheron Constantin, Jaeger-LeCoultre, and Bulgari, for example, are also using peripheral oscillating weights for ultra-thin pieces), while not potentially having to deal with a reduction of the rotor’s winding efficiency. A micro-rotor, on the other hand, allows for a potentially smaller diameter of the movement (and also allows an unobstructed view of the movement). Overall, the Manero Minute Repeater ended up being 43.8mm wide and just 12.47mm thick; the movement itself is 35.70mm in diameter and 8.59mm thick.

The Minute Repeater as an Encore

In 2018, the Lucerne-based watchmaker had already launched a timepiece with a world’s-first ‘floating’ peripheral tourbillon and stop-seconds mechanism for the tourbillon (Ref. 00.10920.03.13.01) and became the 44th brand to join the Fondation de la Haute Horlogerie (FHH), whose vocation is to promote excellence in watchmaking around the globe. This year, Carl F. Bucherer takes the concept to its highest horological execution to date by adding a minute repeater with a peripherally anchored regulator, another watchmaking world first. 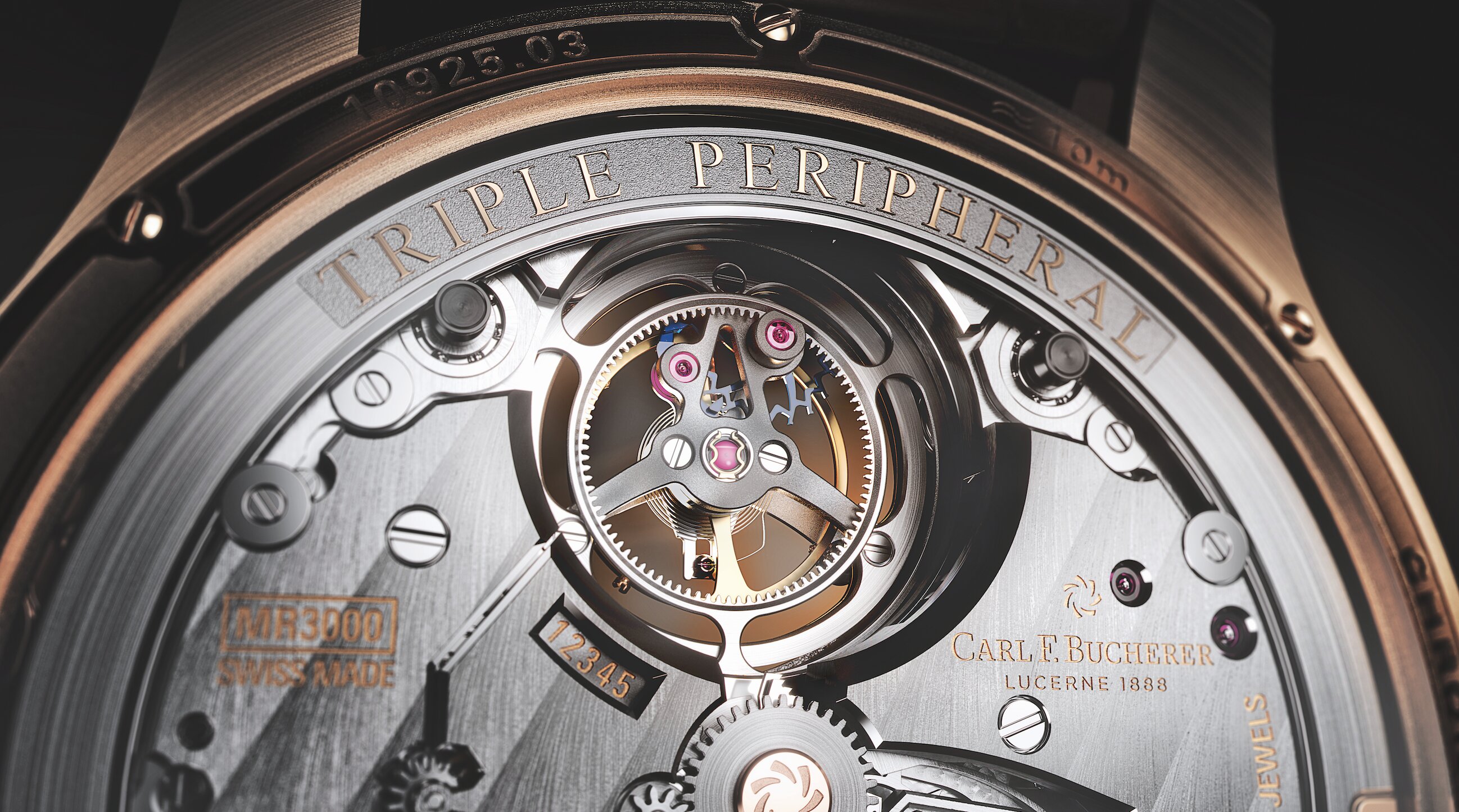 The new Caliber MR3000 also includes the peripheral rotor introduced in the original Caliber A1000 (and upgraded in the successor Caliber A2000) and the peripheral tourbillon of 2018’s Caliber T3000. As with the tourbillon cage of the latter calibre, the mechanism that regulates the beat of the repeater’s chimes is mounted peripherally on three low-friction ceramic ball bearings that ensure stability. This patented mechanism is designed to be visible from the watch’s dial side through a window above 6 o’clock. Furthermore, the repeater’s striking hammers are also on display, through dial openings at 5 and 7 o’clock.

Additionally, the repeater incorporates a protective mechanism that prevents inadvertent activation: A small aperture at 9 o’clock displays the current mode of the watch, with a blue dot indicating that the crown is pulled out for winding or setting, or a musical note that alerts the wearer that the chiming function is activated. Additionally, the crown cannot be pulled out when the repeating function is active; and when the crown is pulled out, the repeater mechanism is locked. In the manner of a stop-seconds function, withdrawing the crown also stops the motion of the floating tourbillon cage, in a large aperture at 12 o’clock, allowing for precise resetting of the watch. Automatic Caliber MR3000, the finely finished, micro-mechanical engine of this harmoniously designed ‘Triple Peripheral’ timekeeper, is visible through a sapphire caseback, storing a power reserve of 65 hours and boasting COSC-certified chronometric timekeeping. 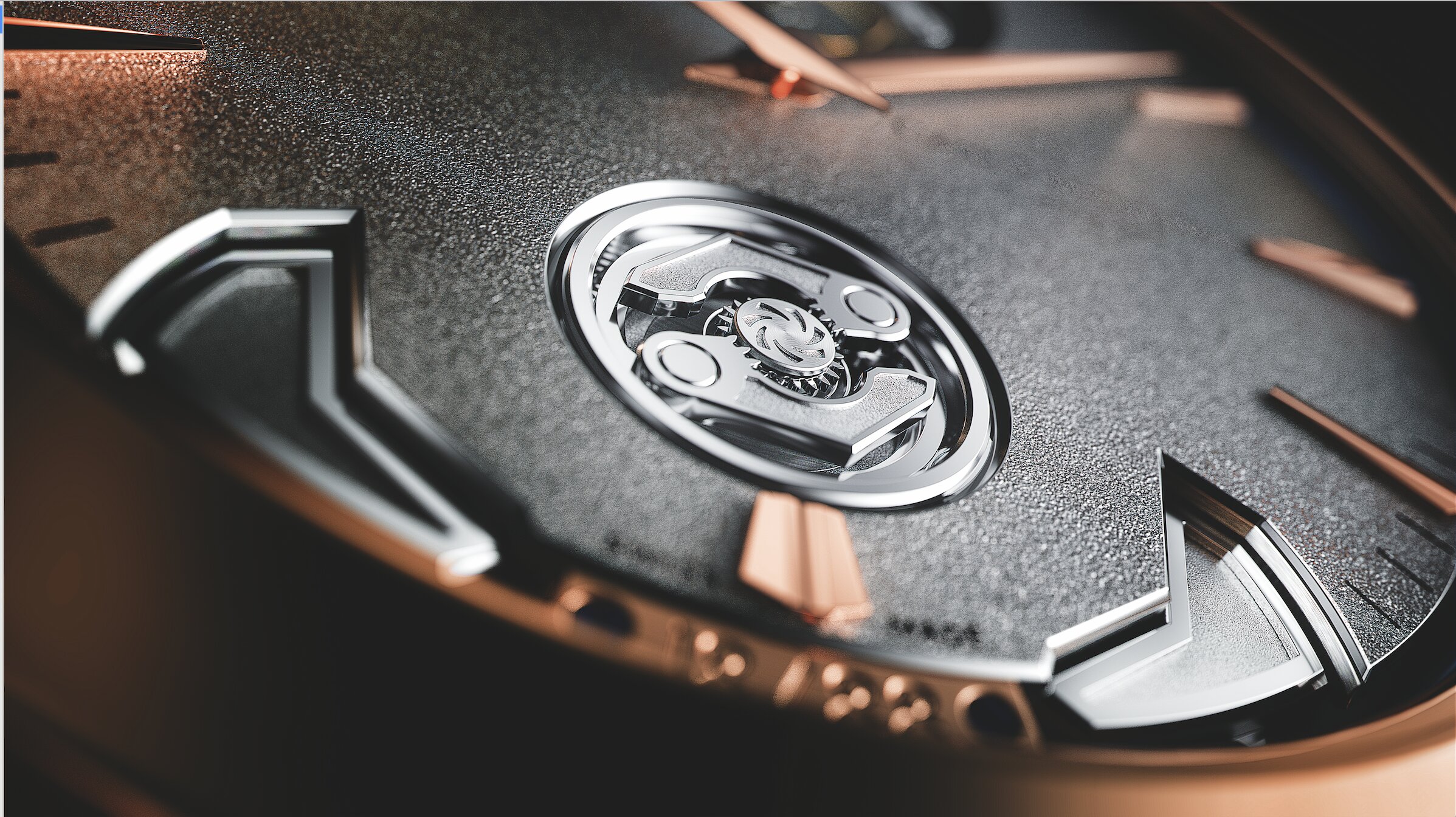 The case is made of 18K rose gold, is distinguished from predecessors in the Manero collection by its openworked, spoke-shaped lugs, which reduce the mass of the watch and thus amplify its chimes. The dial, also made of 18K gold, has an electroplated, fine grainé texture and the Manero family’s elegantly formed, finely edged golden hands and appliqués. At 6 o’clock on the dial, an engraved numeral marking the watch as one of only 88 numbered pieces can be found. Mounted on a hand-stitched brown alligator strap with a gold folding clasp, the Manero Minute Repeater Symphony is packaged in a large luxury box with a specially designed resonator meant to allow owners to share the watch’s sounds with a roomful of friends. Crafted from Swiss Jura Mountain spruce, renowned as a ‘tone wood’ and used in the construction of guitars and other stringed instruments, the resonator doubly amplifies the watch’s notes. The watch is offered at retail for `2.95 cr (approx.).

With the Manero Minute Repeater Symphony, Carl F. Bucherer has created an impressive showcase of the family-owned company’s horological skills, and also its ambitions. Ron Stoll, North American president of Carl F. Bucherer, explained, “Having a notably complicated timepiece such as the Manero Minute Repeater Symphony in our profile was very important. As the industry leader in peripheral technology, it was important to show what advantages this technology has and its benefits to individual complications. This offering reinforces the brand’s place amongst true manufactures, and indicates our ability as technical innovators.” 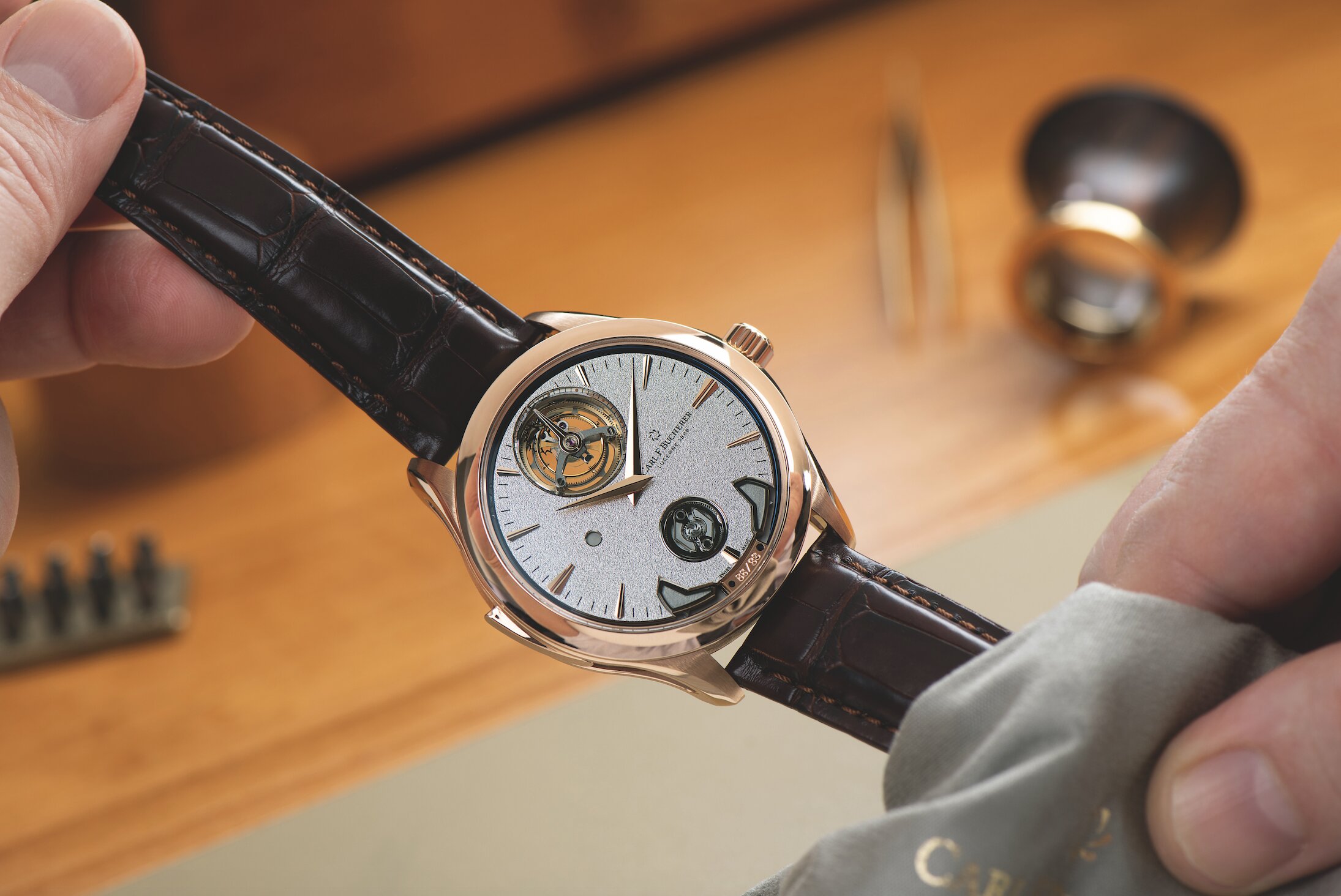 The peripheral construction works specifically well in a minute repeater, in which the hammers and gongs traditionally are placed around the movement, and watching both the hammers and regulator in action unquestionably “stimulates an emotional response,” every single time. The team has also managed to keep arguably one of the most sophisticated complications surprisingly functional and easy to use, resulting in a watch that can easily be worn every day. While the combination of a tourbillon, minute repeater, and peripheral winding is rare (see, for example, Jaeger-LeCoultre’s Ref. 1313520 Master Ultra Thin Minute Repeater Flying Tourbillon from 2014), the list price puts it right between watches like the Zeitwerk Minute Repeater from A. Lange & Söhne and the Resonance Repeater from Armin Strom.

“It has been encouraging to see, hear, and feel the initial reactions from the market,” says Stoll. “There is certainly an appreciation for the level we’re pursuing with the technology from the consumer’s perspective, and the interest is palpable. Because elements of these sophistications can be found across our core collection as well, consumers have a growing confidence in our savoir faire and upward trajectory. The response from retailers and consumers has been positive.”

The story first appeared in the July-Aug 2021 issue of WatchTime US. It is written by Mark Bernardo and Roger Ruegger 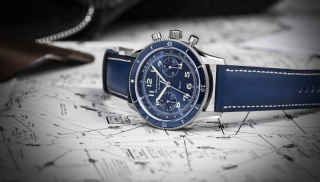