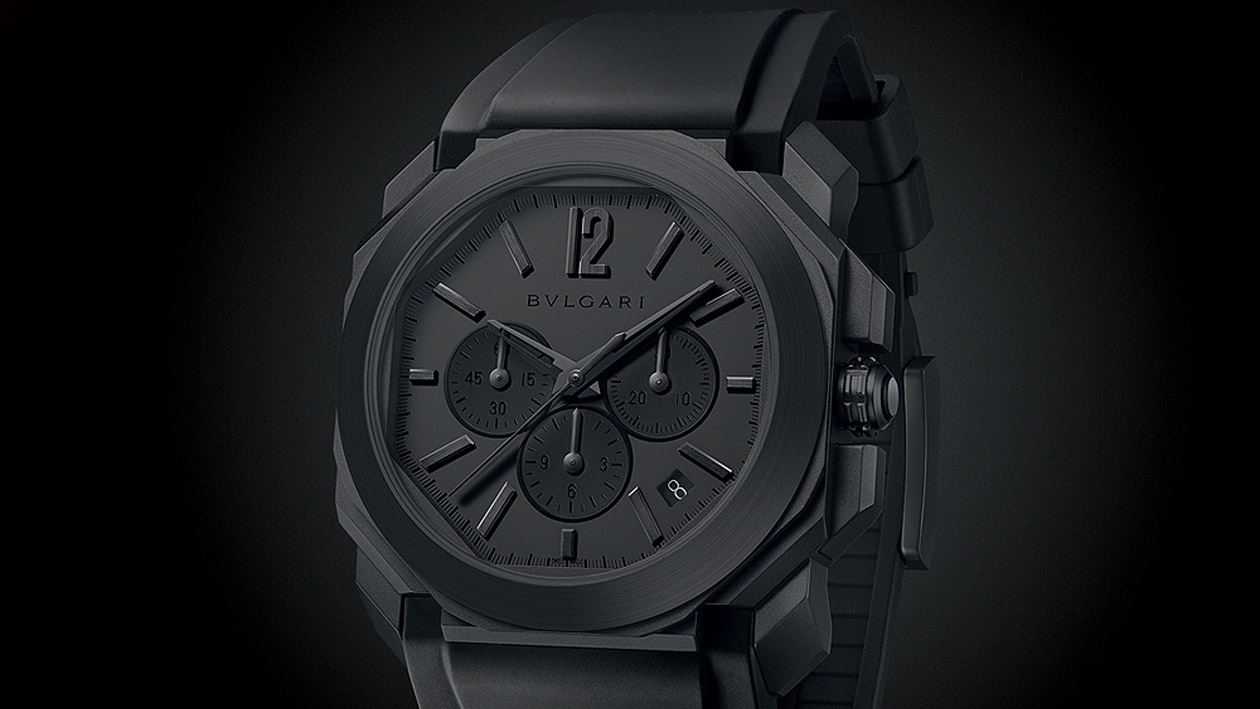 Bulgari launched its Octo collection, whose hallmark eight-sided case design was inspired by shapes in ancient Roman architecture, back in 2012, and has been growing it ever since — and shattering a number of horological thinness records along the way. Now the Italian watch-and-jewelry powerhouse adds two new models in its Octo Black sub-family, a chronograph and an ultra-thin skeleton. 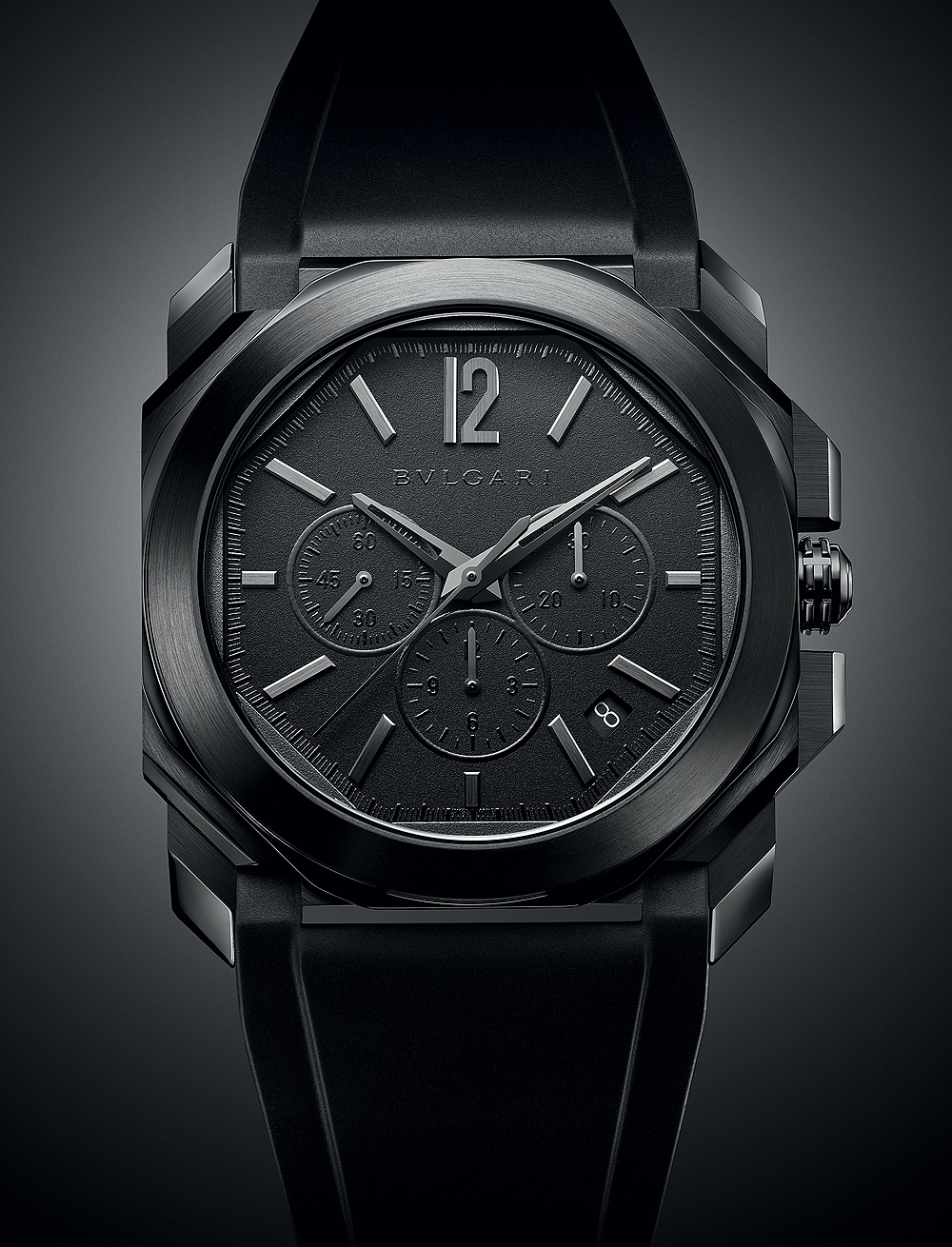 Like all timepieces in the Octo Black collection, the Octo L’Originale Chronograph and Octo Finissimo Skeleton are housed in cases finished in black DLC (diamond-like carbon), with black DLC-coated, screw-locking crowns with ceramic inlays, and outfitted with Bulgari mechanical movements. In every other regard, these two new models differ in significant respects.

The octagonal, multifaceted case of the Octo L’Originale Chronograph measures 41.5 mm in diameter and made of DLC-treated stainless steel. Its matte black dial features hand-applied black hour appliques and cut-out faceted black hands, along with a V-shaped tricompax layout for the three subdials — chronograph minutes at 3 o’clock, chronograph hours at 6 o’clock, and running seconds at 9 o’clock, plus a slanted date window at 4:30. 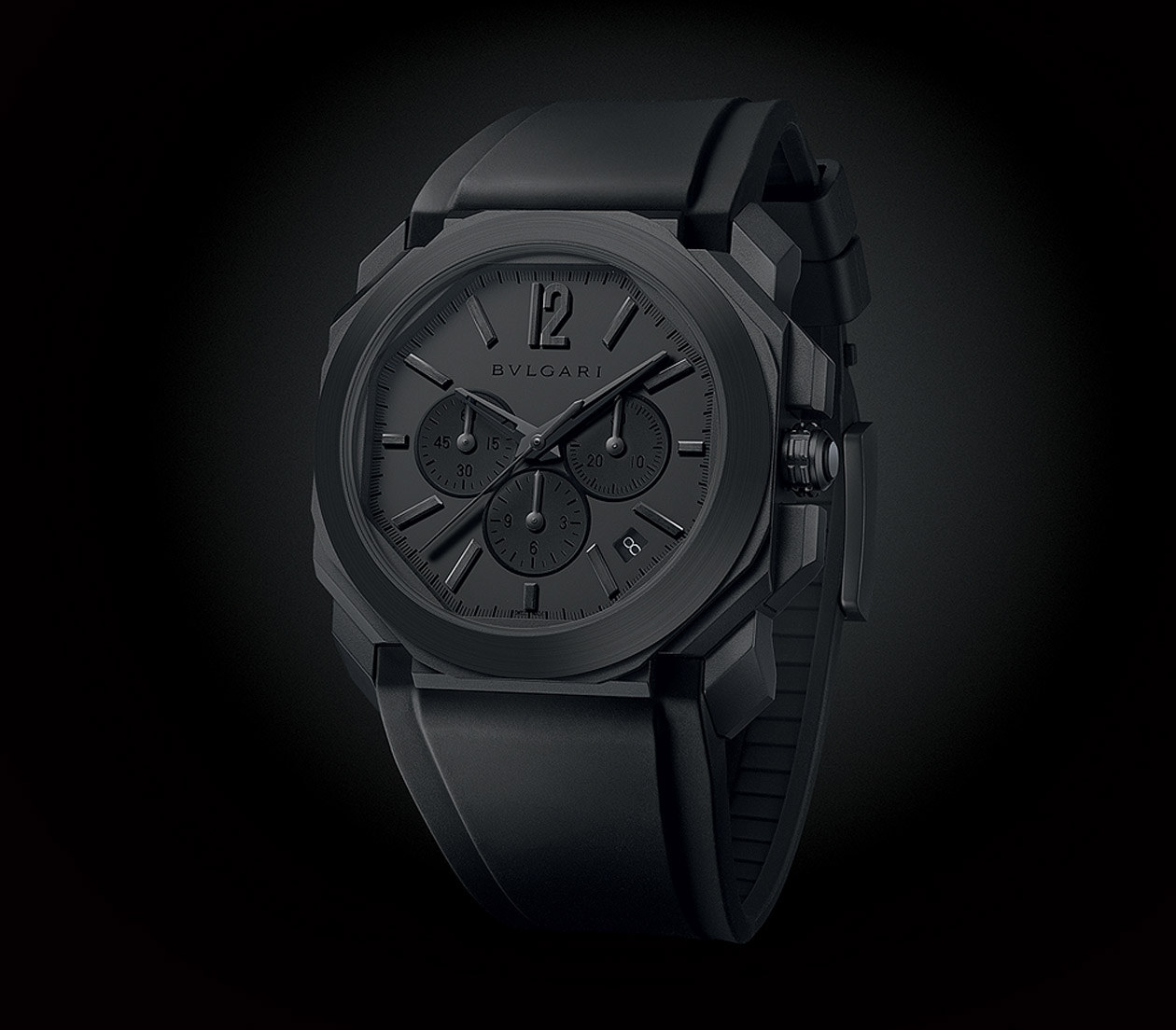 The self-winding movement inside, which is visible through a sapphire display back, is the Caliber BVL 328 Velocissimo, which boasts a 50-hour

"Like all timepieces in the Octo Black collection, the Octo L’Originale Chronograph and Octo Finissimo Skeleton are housed in cases finished in black DLC (diamond-like carbon), with black DLC-coated, screw-locking crowns with ceramic inlays, and outfitted with Bulgari mechanical movements. "

power reserve, a high frequency of 36,000 vph, and a column-wheel controlled 1/10th-second chronograph mechanism. The movement is equipped with a silicon escapement, which the brand says helps to ensure stability and rate regularity while reducing the need for lubrication, and a high level of fine decoration, including circular graining and côtes de Genève. Savvy chronograph enthusiasts may have already discerned based on the preceding info that the BVL 328 can claim an impressive pedigree: its base movement is the famed El Primero from Zenith, Bulgari’s Swiss watchmaking sibling in the LVMH luxury group which owns both brands. The Octo L’Originale Chronograph comes on a black rubber strap that is integrated seamlessly into the case and fastens to the wrist with a DLC-treated steel pin buckle. 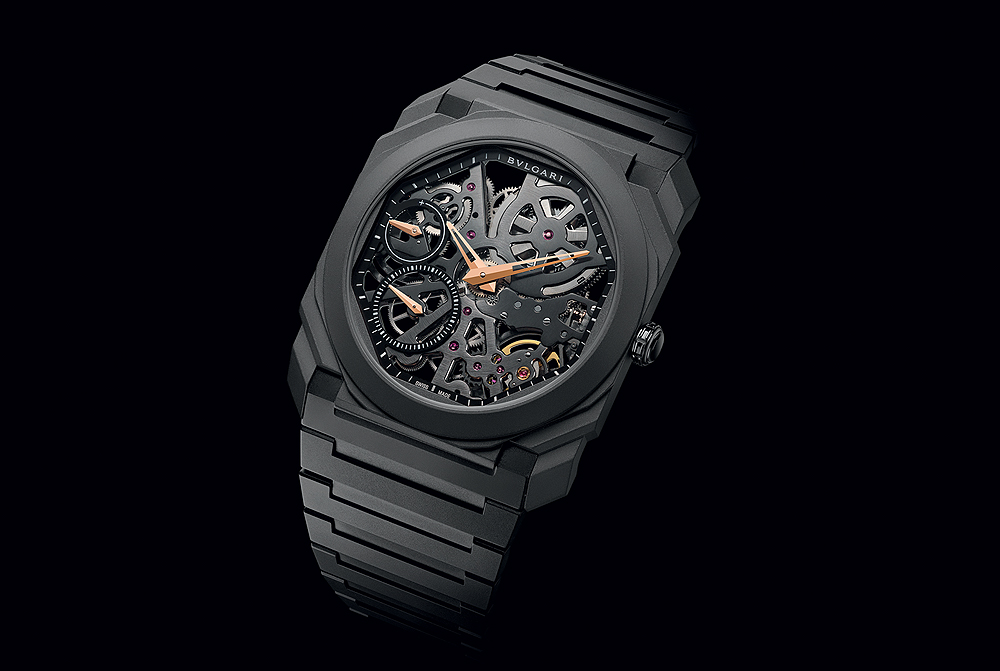 In the Octo Finissimo Skeleton, the metal under the case’s ebony DLC coating is lightweight-but tough sandblasted titanium, and the case itself is both slightly smaller in diameter than that of the Chrono (40 mm) and significantly thinner, at a waif-like 5.37 mm. The clear dial shows off the exquisitely opeworked movement, Bulgari’s Finissimo BVL 128 SK caliber, a hand-wound movement produced in-house by Bulgari. Here, the cutout hour and minute hands are in 18k rose gold, as are the indicators for small seconds, between 7 and 8 o’clock, and for the watch’s impressive 60-hour power reserve, at 9 o’clock. 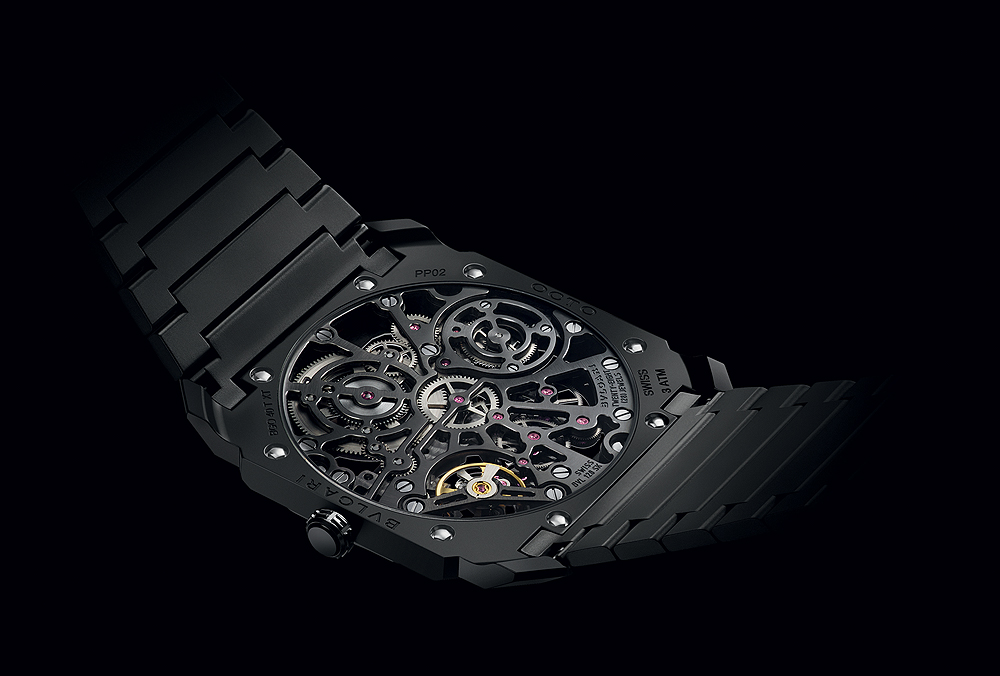 Also fully visible from the sapphire window in the watch’s caseback, the Finissimo caliber boasts black finishing on the mainplate and bridges and measures an astonishing 2.35 mm thick. Instead of a sporty rubber strap, the Octo Finissimo Skeleton is fitted with a black DLC-treated titanium bracelet with a folding clasp, all adding to a very light feel on the wrist.