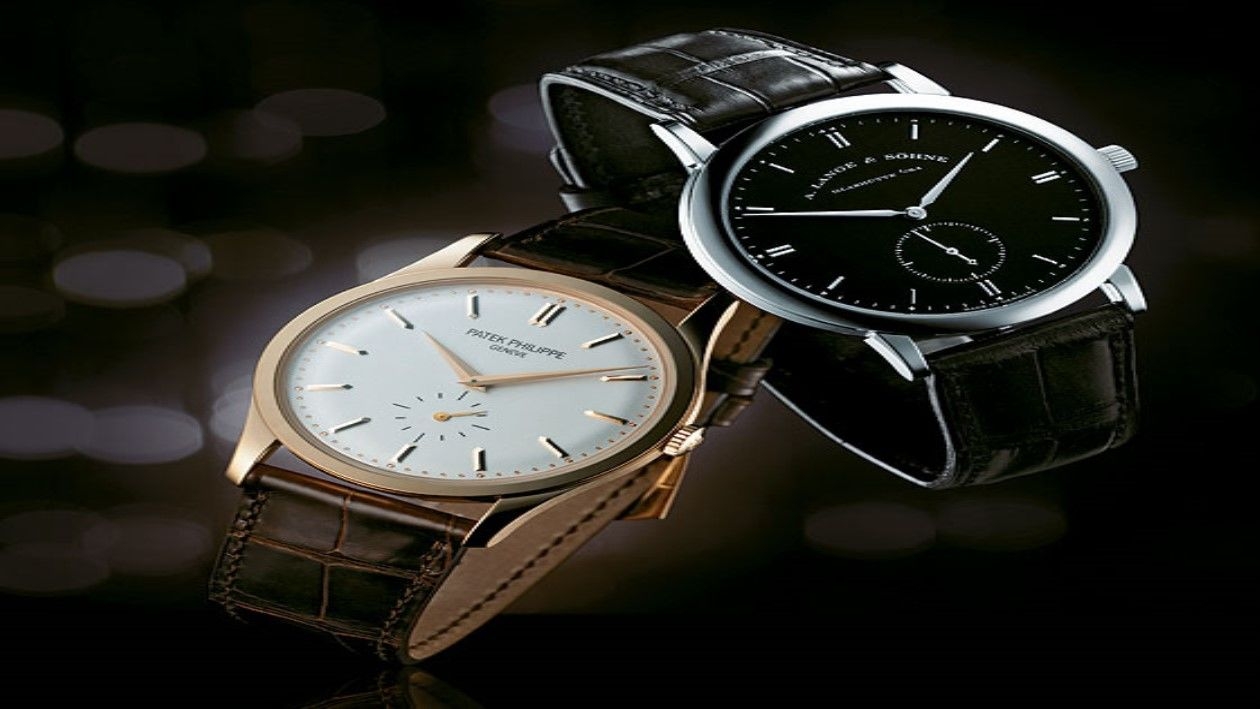 A complication is a pretty thing, but it certainly doesn’t improve the legibility of a watch’s time display. And since the time of day is the most frequently sought information on a watch’s dial, it makes perfect sense to concentrate on the bare essentials: hours, minutes and perhaps also a subdial for the seconds hand to show that the watch is still running. Even the presence of a date display can detract from the perfect harmony and clarity of a dial. The beauty of A. Lange & Söhne’s Saxonia and Patek Philippe’s Calatrava Reference 5196 resides in their simplicity. Absolutely nothing superfluous can be found on these gorgeously pure wristwatches.

"The beauty of A. Lange & Söhne’s Saxonia and Patek Philippe’s Calatrava Reference 5196 resides in their simplicity. Absolutely nothing superfluous can be found on these gorgeously pure wristwatches."

Both brands rank among the world’s finest manufactures. And each has roots that reach back to the 19th century. Ferdinand Adolph Lange founded the original A. Lange & Söhne in the small town of Glashütte in the Kingdom of Saxony (in what is now eastern Germany) in 1845. Lange developed the three-quarters plate and built pocket watches famous for their high quality. They were universally acknowledged as the finest timepieces made in Germany. The company was disbanded in 1945, and only in 1990 was the A. Lange & Söhne name resurrected by a new company founded, like the first, in Glashütte. The company is now owned by the Richemont Group.

Patek Philippe, which was founded in 1839, is  privately owned. This manufacture has created numerous spectacular timepieces in the course of its illustrious history, including the world’s most complicated pocket watches, which were built on commission from the banker Henry Graves. Patek Philippe was also among the first brands to produce wristwatches. The Calibre 89 pocket watch, which debuted in 1989, has 33 functions and remains the world’s most complicated portable timepiece (roughly the size of a grapefruit, it’s so large that the term “watch” seems like a misnomer). The two timepieces we tested are a far cry from the complicated creations for which both brands are famed. Each watch displays nothing but the time; each shows the passing seconds on an off-center subdial; and each has indices rather than numerals. The bare-essentials appearance of the dial reflects the simplicity of the movements. Neither has a self-winding mechanism. Both are therefore able to fit in very slim, elegant cases. Although the movements stick strictly to the basics, both are elaborately decorated by hand. The cases and other visible components are also of the highest quality. In a nutshell, they represent pure ticking luxury.

Both watches look to the past for their design inspiration. The Calatrava reference 5196 bears the same final digits as the original Calatrava, the reference 96 from 1932. The reference 5196 borrows its precursor’s dauphine hands, seconds subdial, faceted indices and wreath of tiny dots forming the minute circle. The diameter of the 96 was significantly smaller, so the rim of its seconds subdial was tangent to the periphery of the dial at 6 o’clock. It isn’t so easy to identify the Saxonia’s precursor. A model with this name was introduced at the brand’s rebirth in 1994. Like the current model, the 1994 Saxonia eschewed both numerals and automatic winding, but its rhombic indices differed from the indices on the new Saxonia. Like all Lange models launched since the firm’s revival, the Saxonia has lancet-shaped hands. The new version debuted last year. It replaces the Lange 1815, which contained the same caliber. The other models in the Saxonia collection are the Grand Saxonia Automatic (41 mm in diameter) and the Saxonia Automatic (37 mm, with a big date display).

The Calatrava and Saxonia are both 37 mm in diameter – an appropriate size for a dress watch in this era of ever-larger cases. Each is also just 8 mm thick, which means it can vanish unobtrusively beneath a well-tailored shirt cuff. Both watches appear even slimmer than they are thanks to the satin finishing on the case sides and domed sapphire crystal. With its narrow bezel and comparatively long lugs, the Calatrava looks even flatter than the Saxonia, which has a more highly domed and significantly broader bezel.

One obvious difference between the two watches is the absence of a viewing window in the back of the Calatrava. Why did Patek Philippe omit it? The answer comes into view when one opens the case and discovers that the Caliber 215 is gorgeous, but also quite petite — slightly less than 22 mm in diameter. A similarly small viewing window might have been a disappointment. The self-winding Calatrava models, by contrast, do have exhibition casebacks, perhaps because their Caliber 315 SC, at 27 mm in diameter, is significantly larger than the 215. Even though Caliber 215 ticks unseen in the dark confines of a windowless case, Patek Philippe has given it the fine finishing and decorative flourishes associated with the best Geneva watchmaking: Geneva Waves, beveled and polished edges, polished screw heads, satin-finished transmission wheel and ratchet wheel, polished flanks on the gears’ teeth, and a Gyromax balance. The movement also bears the Geneva Seal. The layout of the bridges hearkens back to the days of Patek pocket watches.

The Saxonia isn’t as shy; it shows off its movement through a sapphire caseback. Its movement, Caliber L941.1, doesn’t completely fill the case, either, but at 25.6 mm in diameter it is appreciably larger than the Patek caliber. The white gold rim around the window in the caseback provides room for the company name and watch serial number but isn’t unduly broad. The three-quarters plate, a tribute to the plates used in Lange’s 19-century pocket watches, is made of nickel silver and adorned with Glashütte waves. It is dotted with ruby jewels in gold settings, which are held in place by blued screws. The screw balance is affixed to a cock with hand-engraved embellishments and, on top, a swan’s neck fine adjustment mechanism. The edges are beveled and polished; the heads of the screws are polished; and the pallets, the escape wheel and the cover plate of the escape wheel are polished. Unlike the Calatrava’s movement, the Saxonia’s is equipped with a stop-seconds function, which stops its seconds hand when the crown is pulled out. This feature makes it easier to set the watch with to-the-second accuracy. Winding and setting both watches is easy. The Calatrava clicks nobly while it is being wound, whereas the Saxonia is nearly inaudible.

The crowns on both watches are fairly easy to grasp. Very little force is needed to operate them. The somewhat larger crown on the Calatrava, combined with this watch’s slimness, means the winding button lies very close to the wrist. If you like to wear your watch low on your wrist, the crown might press uncomfortably against the back of your hand. Furthermore, the domed back gives this watch a tendency to shift position. The Saxonia fits more comfortably on the wrist, not solely because its crown is smaller, but also because its back is flat and its lugs are mounted very low. All this helps to prevent slippage on the wrist.

Both watches have hand-sewn, crocodile leather straps with cut edges and are of excellent quality. The Patek Philippe strap shines with glossy clear lacquer, while the Lange one has a matte finish. Each strap has a simple prong buckle, in keeping with the watches’ overall minimalist design. A folding clasp is more elaborate and doesn’t necessarily enhance wearing comfort. Patek Philippe facets its prong very beautifully, but merely bends it around the crosspiece. The polished buckle is a good match for the watch and is instantly identifiable as being from Patek Philippe. Lange mills its prong from a solid block of precious metal and reinforces the buckle with an additional crossbar. The strap is guided through the buckle so that it scarcely needs to be bent; the clasp and strap fit closely on the wrist. The name “Lange” appears on the buckle in clear, capital letters. 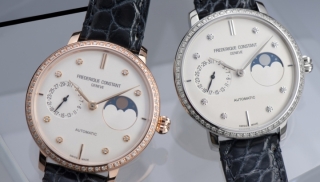 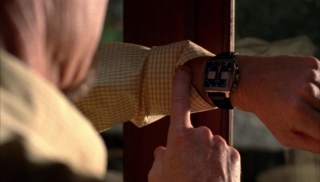 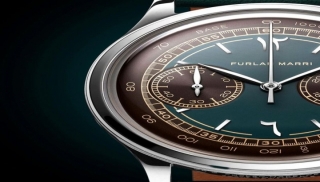