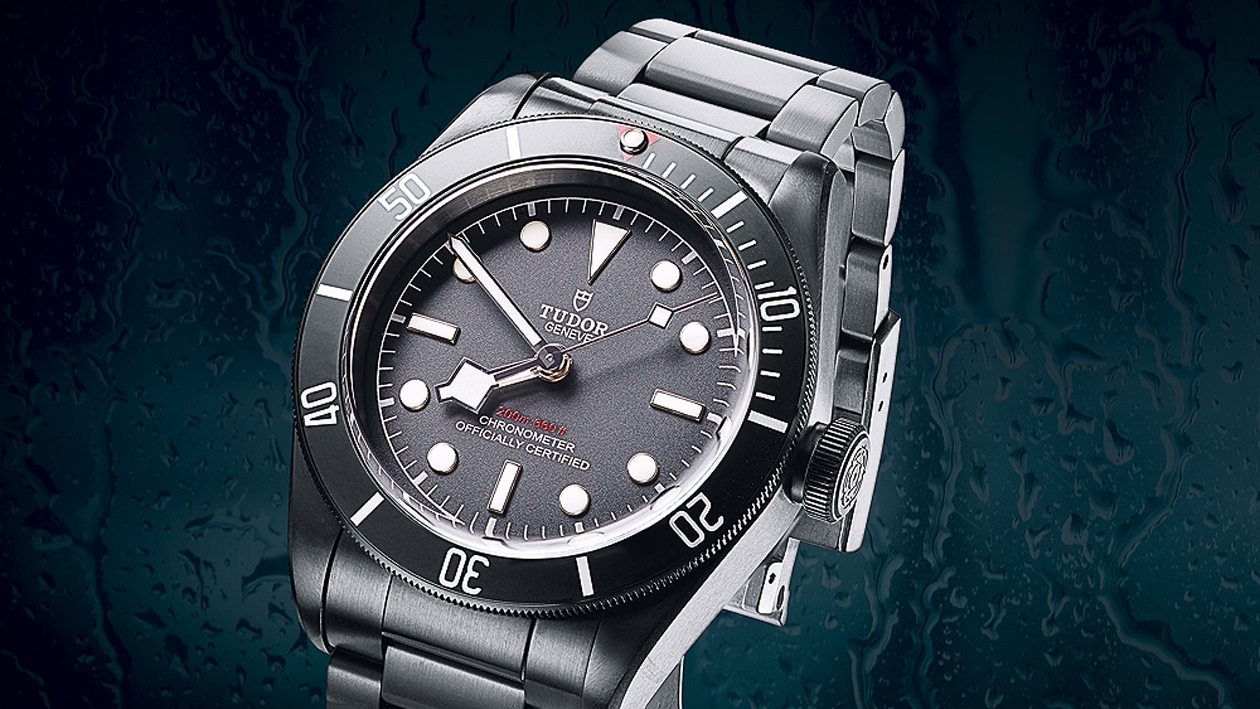 A black watch is perfect for diving in deep dark waters, and it looks great on dry land, too. In this feature from the WatchTime archives, we test Tudor’s popular model in its recently launched all-black version: the Heritage Black Bay Dark. Written by Alexander Krupp. Photos by OK-Photography.

Over the past several years the Tudor Heritage Black Bay has grown into an important and attractive watch collection. It was launched in 2012 with a retro-look model in stainless steel with a red dive-watch bezel, followed in 2014 by a more reserved version with a blue rotating bezel, and then one year later with the simplest version so far, in black. 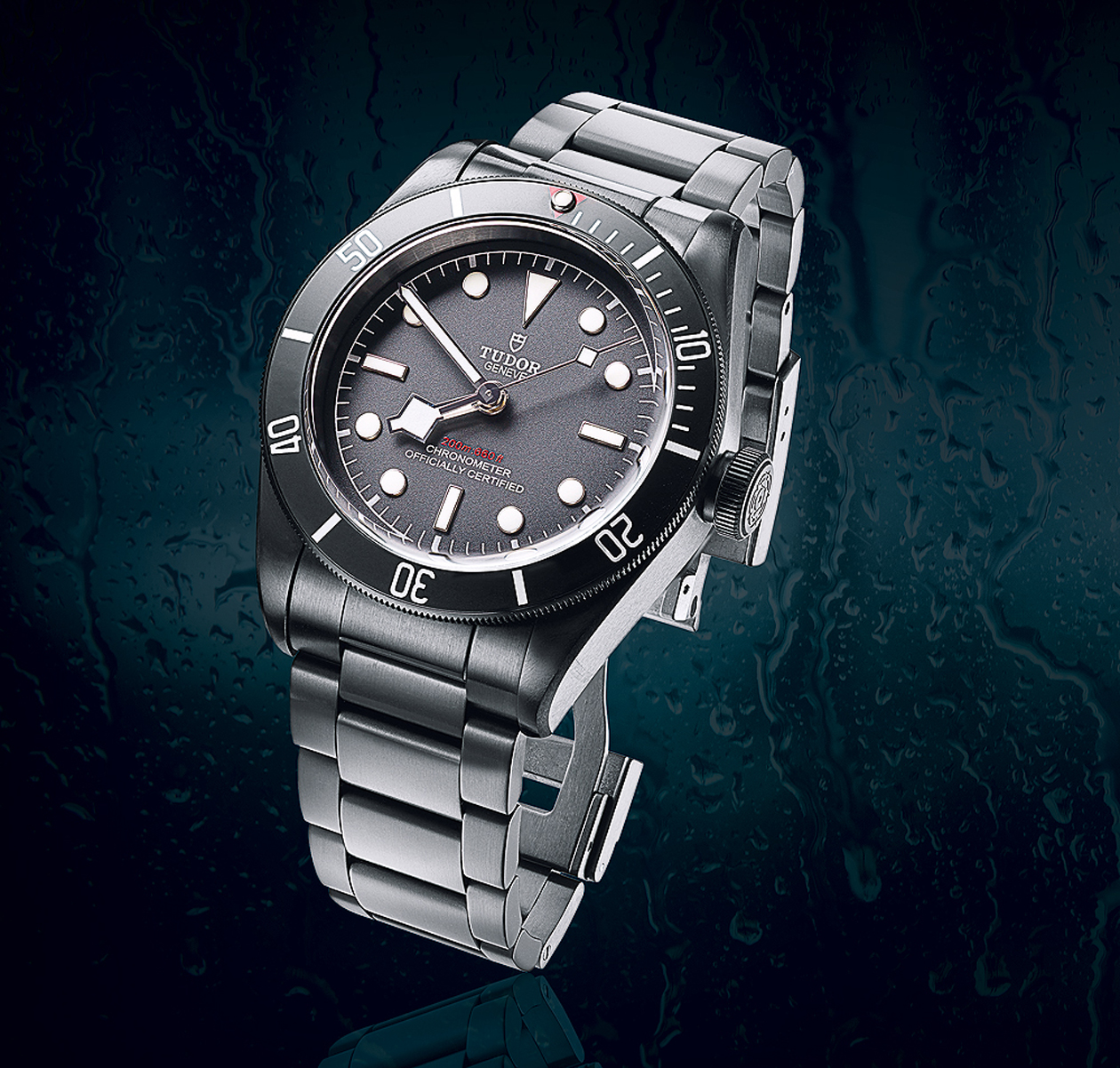 Tudor set off a new round of reworks in 2016 with the introduction of the Heritage Black Bay in bronze, in a 36-mm case, and with an ultra-sporty completely black version. Plus all new and existing Heritage Black Bay models will use the in-house MT5602 movement instead of the ETA 2824, which was previously used. (The MT5602 was introduced in 2015.)

"Each watch comes with either a three-row stainless-steel bracelet or an antiqued leather strap, and a fabric strap is always included with either option. "

A wide range of different straps and bracelets continues to add variety. Each watch comes with either a three-row stainless-steel bracelet or an antiqued leather strap, and a fabric strap is always included with either option. The boldest choice is the 36-mm 2016 Tudor model with an “urban camouflage” fabric strap.

The watch we tested has a black, brushed PVD-coated stainless-steel bracelet that matches the case. While the dial has a matte finish, the rotating bezel stands apart with a shiny aluminum track. The fact that the ring is not made of ceramic, and is therefore susceptible to scratches, is rather difficult to overlook in a watch that costs more than $4,000. 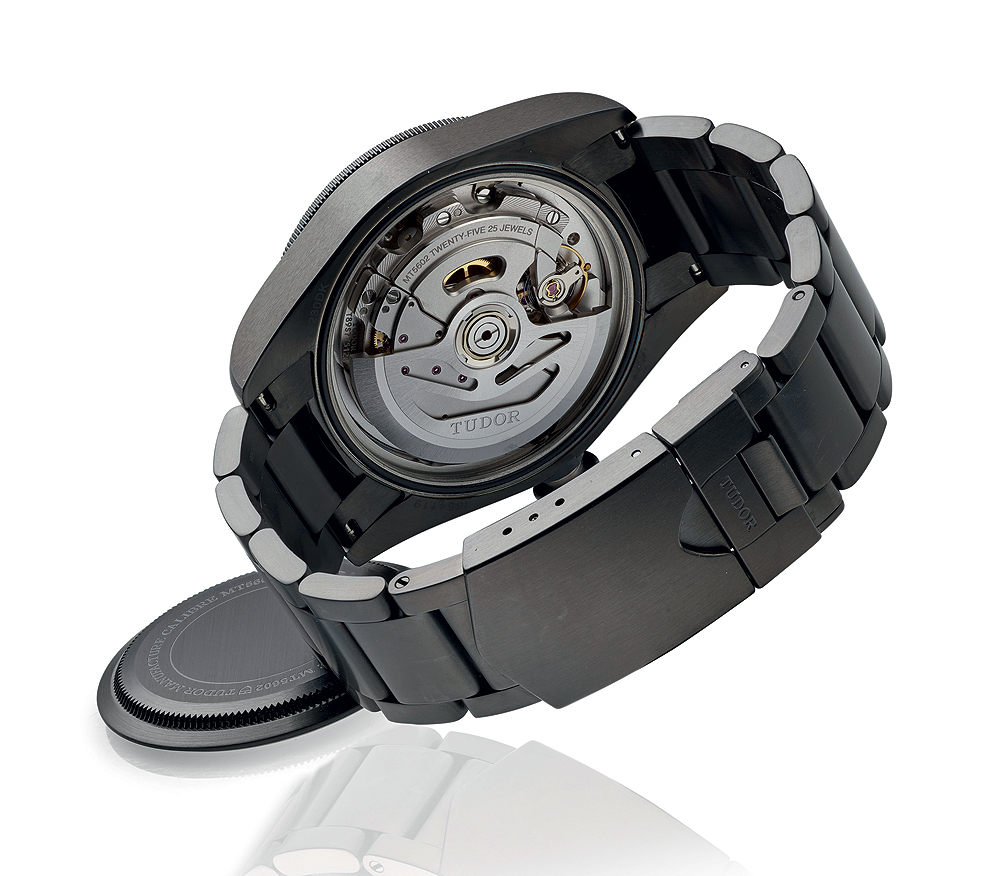 But an entirely positive feature is the movement, especially in light of Tudor’s traditional values of precision and sturdiness. This little brother to Rolex meets initial expectations by ensuring the inspection of every movement by COSC, the official Swiss testing institute for chronometers. In addition to other criteria, COSC certification requires that the watch’s average rate deviation remain within -4 and +6 seconds per day.

Our test on the electronic timing machine confirms this precision. However, in contrast to the official test, we

"Additional quality features of the manufacture movement include the long, 70-hour power reserve and the variable inertia balance with four regulating screws. The rate is no longer regulated by changing the active length of the balance spring, as was the case when the Heritage Black Bay had an ETA movement. Even though Tudor used a different fine regulator in the ETA 2824, a stable variable inertia was possible only with the switch to its in-house movement."

also tested the sixth position, crown right, which revealed a minor outlier in the minus range. While this position is rare during everyday use – it occurs only when raising the wrist to read the time – it is essential for people who store their self-winding watches on watch winders because many of these machines might leave timepieces in a vertical position during rest periods that can last several hours.

Various technical properties of the “Movement Tudor” MT5602 fulfill the second part of the brand’s philosophy: sturdiness. First of all, the robust nature of the 6.5-mm-high movement ensures that no functional problems will occur due to minor tolerance variations. Secondly, the balance is not supported just on one side by a cock but instead lies completely straight and secure beneath a bridge. And thirdly, the silicon hairspring ensures that no deviation in rate will occur in the event of a disturbance or impact resulting from centering errors or deformation.

Additional quality features of the manufacture movement include the long, 70-hour power reserve and the variable inertia balance with four regulating screws. The rate is no longer regulated by changing the active length of the balance spring, as was the case when the Heritage Black Bay had an ETA movement. Even though Tudor used a different fine regulator in the ETA 2824, a stable variable inertia was possible only with the switch to its in-house movement.

The brand has invested very little effort or cost in decorating the movement, which is consistent with the philosophy of providing reliable watch technologies at a reasonable price. Mechanical watch enthusiasts who may be driven to open the fully threaded caseback (with the correct tool, of course) will discover minimal decorations, limited to a skeletonized and brush-finished rotor engraved with the Tudor name. 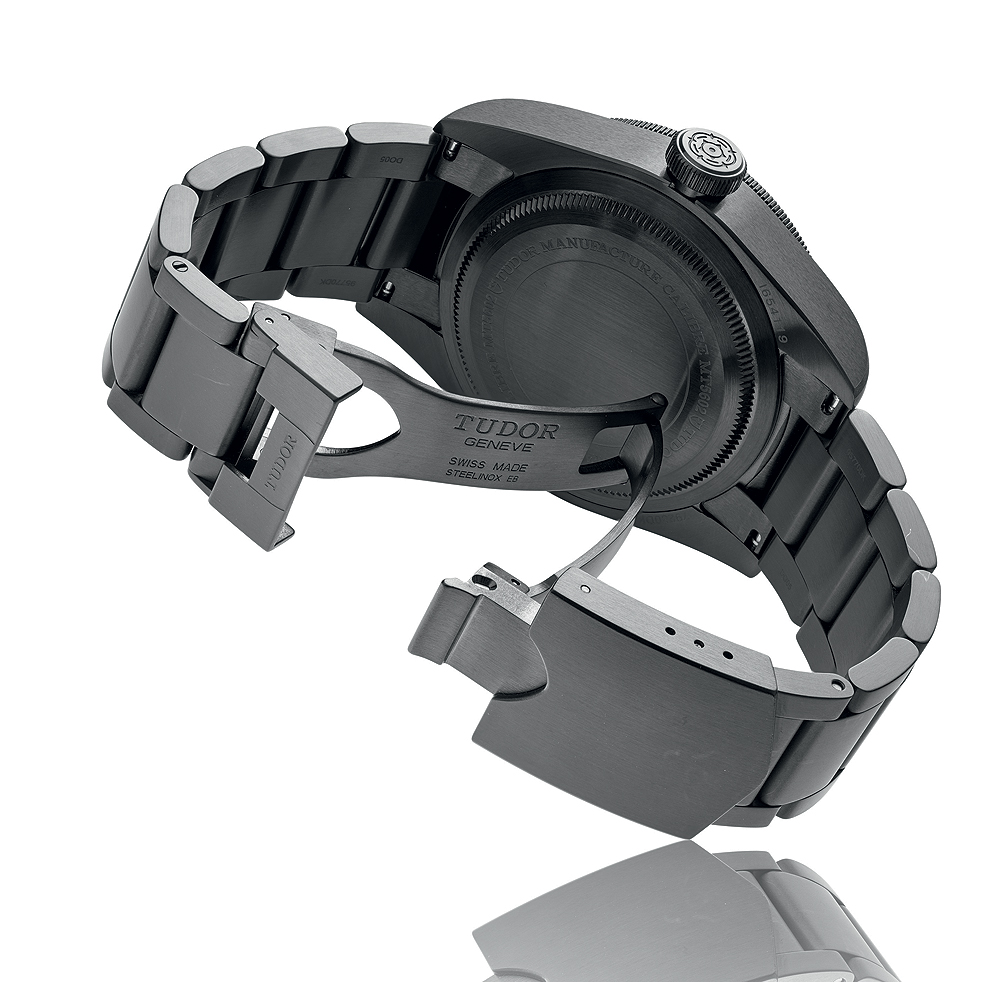 Tudor has omitted a date display for the Heritage Black Bay Dark, which we see as a positive change. This sports-design watch follows in the tradition of the Tudor Oyster Submariner of 1954, which also had no date display; its clean, unadorned dial simply has eight round and three rectangular hour markers and one triangular marker at 12 o’clock. The striking hour and seconds hands with their distinctive “snowflake” shapes can be traced to the second Submariner generation, which was presented by Tudor in 1969. The watch’s water resistance today is 200 meters, as it was in 1958. This was an impressively high value at the time of diving pioneers and remains sufficient for most recreational divers today.

In this way, the Heritage Black Bay Dark unites the best of various classic models – now in the casual black outfit of a very trendy sports watch. It’s the coolest way to dive – not to mention the best way to bring diving history into the beach bar.