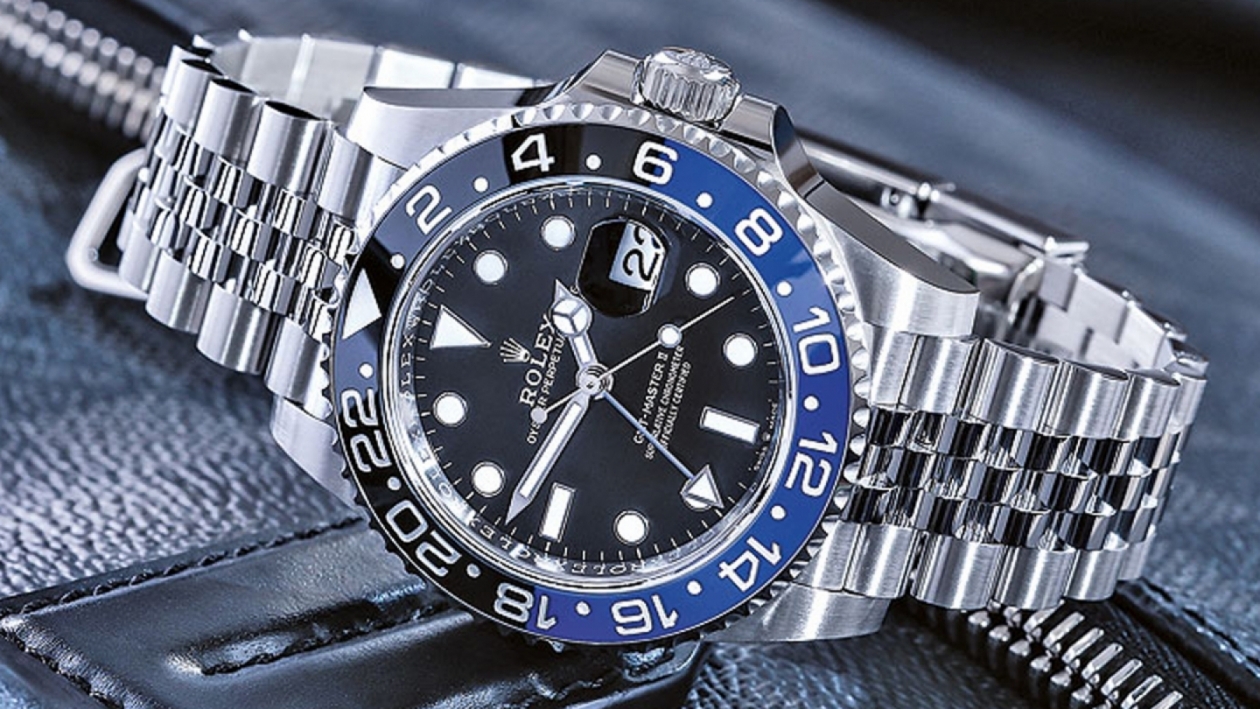 Rolex has updated its popular travel watch, the GMT-Master II, in steel with its blue-and-black “Batman” bezel. WatchTime US tested one of the first pieces available with a Jubilee bracelet and a new movement in this feature.

The blue-and-black colour combination on the bezel of this Rolex GMT-Master II led its fans to call it “Batman.” The current version with a Jubilee bracelet and a new movement was introduced in 2019. Its predecessor with these same colours appeared in 2013, and was the first Rolex model with a two-tone ceramic bezel. This particular colour combination did not exist previously. The first GMT-Master II of 1954 sported the blue-and-red 24-hour scale and was later called “Pepsi” because of this colour combination. These colours were first selected to more clearly distinguish between the day and night hours in the second time zone. These and other specifications originated from Pan Am Airways, who requested the model. New jet airplanes were making intercontinental flights shorter and more popular, and with the increasing number of flights came a rise in the desire for watches with a dual time zone. The popularity of the GMT-Master grew from its pilots’-watch flair and its colourful and immediately recognisable bezel. Later, there were more reserved versions like the black-and-red “Coke” model. 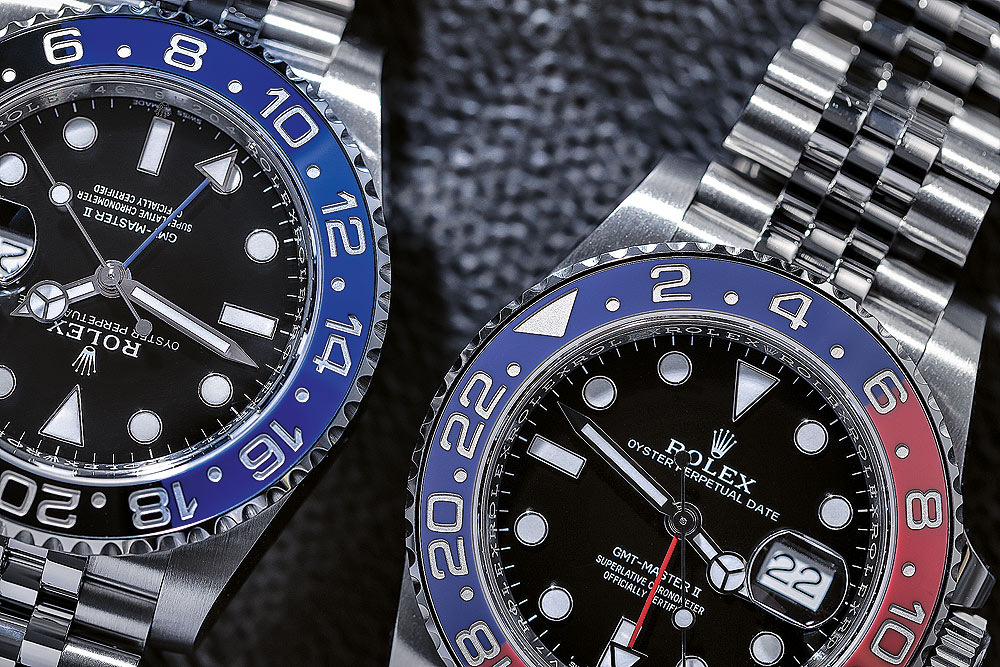 Batman or Pepsi? The color combination on the Batman is somewhat more reserved; the Pepsi more closely adheres to the original.

The Jubilee bracelet is very comfortable to wear. Its small links lie snugly and do not pull delicate wrist hair. The Oyster bracelet is also comfortable thanks to its curved links. The bracelet and the case are still made of non-corrosive 904L stainless steel, which Rolex has recently begun calling “Oystersteel.”

Rolex does not pair an Oyster clasp with the Jubilee bracelet here as it does with the Datejust watches but instead uses the Oysterlock folding clasp like it does on its sport models. It has an additional safety bar but looks very similar – both have the Easylink extension that can lengthen the bracelet by up to 5 mm. This practical mechanism is helpful when higher temperatures or physical activity may cause wrist size to increase. A half link can be folded out from the clasp to make the bracelet longer with no obvious difference in its appearance.

The high-quality clasp on the Jubilee bracelet is nearly perfect, both in its workmanship and in its ease of operation. The fold-out safety bar blends in when shut. Opening the safety bar by lifting the Rolex crown reveals a lever that is also easy to lift for opening the clasp fully. The elegant Jubilee bracelet has a practical Oysterlock folding clasp and safety bar. The Easylink extension gives it some air to breathe.

The winding crown is also simple to use to wind the watch after unscrewing it from its locked position. In the first pulled position, the normal hour hand can be advanced forward or back in hourly increments to set a new zone time. The date will also follow in either direction. In the second pulled position, the minutes hand can be adjusted (and with it, the 24-hour and the normal hour hand). Thus, the 24-hour hand is best used for the home time and/or for the GMT for pilots, while the normal hour hand shows the local time. The GMT-Master II is well known for this practical travel watch function. Many other watch manufacturers offer only a quick adjustment of the 24-hour hand, which is inconvenient when traveling.

In addition, with the GMT-Master II, it is possible to set another time zone temporarily using the bezel. For example, if you are in the U.S. and are working with a company in Europe, simply turn the bezel so that the GMT-Master II shows the time in the desired time zone to know the availability of your business contact at a glance. All in all, the GMT-Master II offers extremely useful time zone functions.

At its beginning, in 1954, the bezel of the GMT-Master II was made of Plexiglas and the colour and the white scale were printed on the underside. From 1959 to 2007, Rolex produced the bezel in aluminium, with the colours applied via an anodising process. This was followed by a track made of zirconium oxide ceramic and with it, problems with the colour. Monochromatic bezels were standard since two-tone tracks appeared to be a technical impossibility. But Rolex persisted in its research and found a solution for the first Batman by 2013. It developed and patented a process for the monobloc bezel that added a metallic salt on one half of the bezel prior to heat treatment in a kiln. The final colours were produced by sintering in a kiln at 1,600 degrees Celsius for more than 24 hours. Even close examination reveals the superior finishing, like the color transition on the bezel.

A second problem was achieving the desired red colour for the blue-and-red Pepsi bezel, since there is no mineral-based pigment that produces a rich red. After years of research, Rolex came to rely on a ceramic based on aluminium oxide and added chromium oxide, magnesium oxide and a rare-earth oxide to produce the red half of the ceramic bezel. For the blue colour, one half of the bezel was saturated again with a metallic salt solution prior to sintering.

The bezels of the Batman and the Pepsi are based on different ceramic substances, zirconium oxide and aluminium oxide, which explains why the blue colours on the two bezels look so different. On our test watch, the blue appears much brighter than on the new Pepsi model. However, the incident light plays a major role on our perception of colour and as always, there are slight differences among the Pepsi bezels.

Both materials forming the track condense and shrink during the sintering process and must be machined with diamond tools to the exact measurements. To ensure that the numerals remain perfectly legible, the entire ring is coated with platinum using a PVD process and then carefully polished to leave the precious metal behind in the recessed dots and numerals. Both processes have been patented by Rolex. In addition to its scratch resistance, the ceramic bezels have the additional advantage of being UV resistant and do not fade. 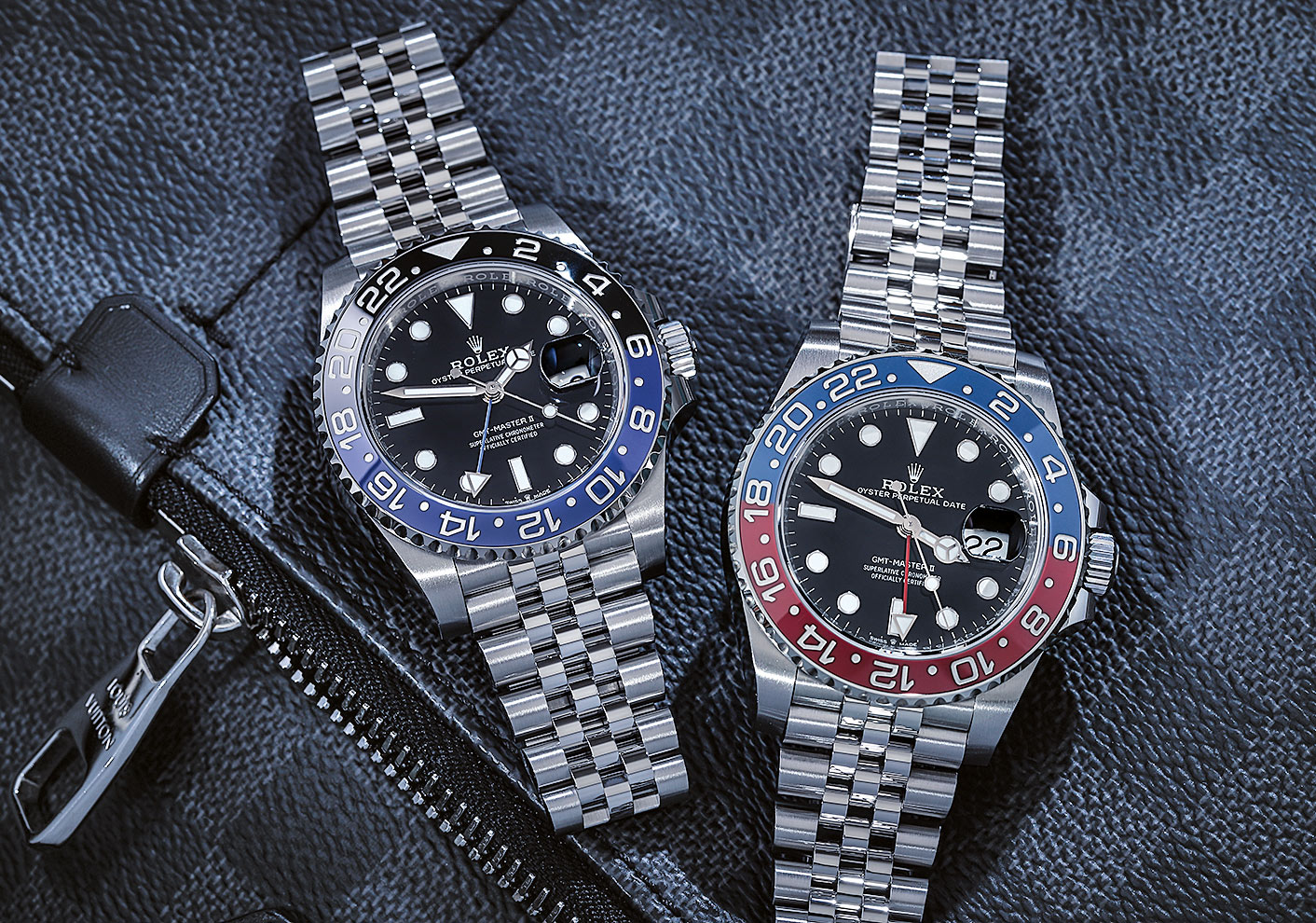 The blue hues on the bezel rings of the Batman and the Pepsi are clearly different. No wonder: they are based on different ceramics.

As with the Pepsi, the new time-zone Caliber 3285 is used in the updated Batman. With the exception of the chronograph, all Rolex self-winding watches are powered by the Caliber 31xx (the old version) or the new Caliber 32xx with a power reserve of 70 hours rather than 48. Unlike the Caliber 3186, the new movement has a ball bearing for the rotor. The proprietary Paraflex shock absorber is designed for improved performance in the case of impacts. But the greatest benefit for the wearer is the increased power reserve – instead of two days the watch now provides almost three full days of power, due primarily to the more efficient Chronergy escapement. The geometry of the pallet fork and escape wheel were optimised and, with the LIGA galvanic process, Rolex could create much lighter-weight cut-out components. The escapement mechanism is made of a nickel-phosphorous alloy to be impervious to magnetic fields.

Unchanged are the well-known features of Rolex movements: an extremely sturdy balance bridge (instead of a one-sided balance cock), the free-sprung hairspring with over coil made of a paramagnetic niobium-zirconium alloy, and its fine regulator with its Microstella weights on the balance wheel. The movement can be regulated using a special tool without removing the movement from the case.

Rolex improved the caliber in the core virtues of accuracy, longevity and robustness. Decorations include a sunburst finish. Hand engraving is not present nor was it expected. The new movement can be easily identified by a small detail on the dial: a tiny Rolex crown is inserted between the two words “Swiss Made.” The new Caliber 3285 now has a three-day power reserve, an improved escapement and a ball-bearing rotor.

As always at Rolex, the official chronometer certificate from the Swiss testing agency COSC confirms the high level of precision at various temperatures and positions. The company’s own in-house standards specify an even stricter adjustment of the daily average between -2 and +2 seconds per day. On the timing machine, our test watch met these higher expectations and showed an average deviation of only -0.5 seconds. All six positions remained between -2 and +2 seconds and the greatest positional deviation was only 4 seconds. There was a manageable drop in amplitude between the vertical and horizontal positions.

The price of the GMT-Master II, $9,250, remains in the mid range. There are more economical manufacture alternatives with a second time zone and also more expensive ones. But hardly any other manufacturer can keep pace with Rolex in terms of value retention. Since May 2019, this new edition has been available in very limited quantities – and in the next several years interested buyers will need to plan on longer wait times for delivery.

Rolex has hit the bull’s eye with the new edition of the black-and-blue GMT-Master II in steel. Even though the design has undergone only minor changes over the last 60 years, the watch has become a classic that appeals in its timelessness rather than seeming dated. The Batman colours are more reserved than the Pepsi with its bright red colour and can easily be worn with a suit. The Jubilee bracelet matches the watch well. Rolex has also improved the technology with the new movement that offers the benefit of an extended power reserve.

Functionally Rolex offers more than most other manufacturers – from the bracelet extension to its time-zone adjustment. Also, accuracy, legibility and wearing comfort are at the highest levels. We would prefer to see a transparent caseback – and that Rolex would produce enough timepieces to satisfy demand. 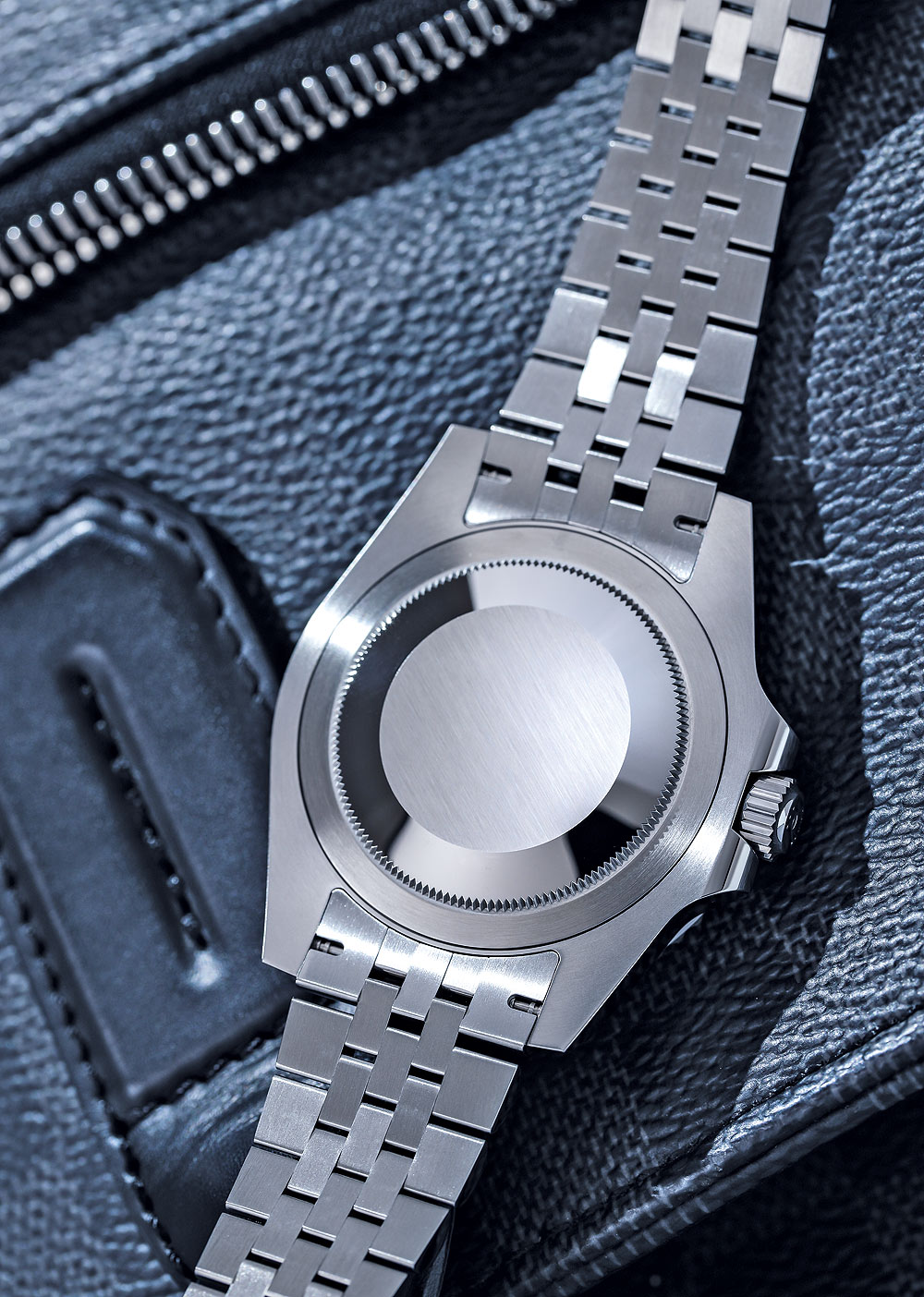 The Jubilee bracelet’s small lugs nestle comfortably on the wrist.

*The story first appeared on WatchTime US.