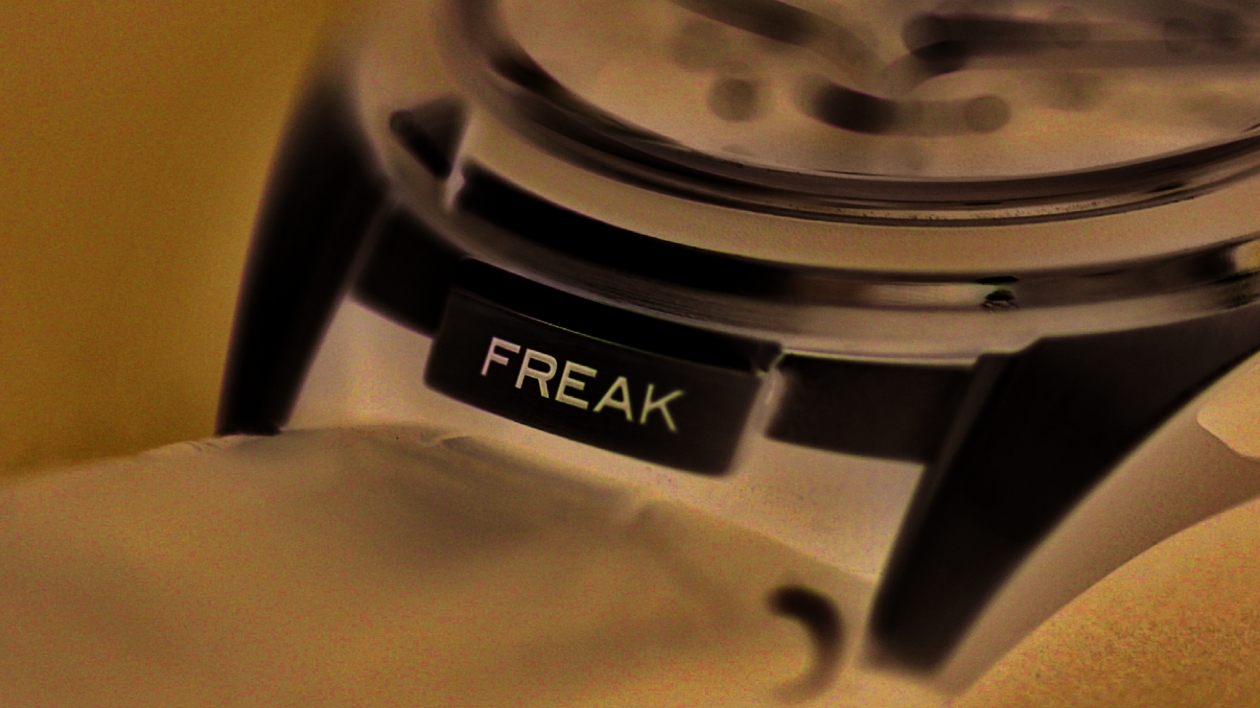 Ulysse Nardin unveiled the first automatic version of the game-changing Freak last year. However, the revolutionary Grinder winding system is just one noteworthy feature of the Freak Vision, which deftly blends the brand’s nautical history with its forward-thinking technical inventiveness.

At first glance, to the uninitiated, Ulysse Nardin can seem a tad schizophrenic as a brand. On the one hand, there are the very traditional and historic nautical themes, embodied by the watchmaker’s role as an important producer of marine chronometers to the world’s navies since the 19th century and the modern wrist timepieces inspired by that history. On the other, there is the very modern, bordering on futuristic, technical innovation coupled with seriously unconventional, decidedly avant-garde design, as exemplified by the aptly named Freak models, the first of which hit the watch world like a thunderbolt in 2001. But take a closer look and you will understand that these two pillars – tradition and innovation – are actually very complementary, and rarely do they come together more successfully than in the recently launched Freak Vision, a watch we had the opportunity to wear and review for a few weeks during the holiday season.

From both a technical and an aesthetic standpoint, the Freak Vision can be regarded as the ultimate evolution of the original Freak and its trailblazing successors, including 2015’s Freak Lab and 2017’s InnoVision2 Concept Watch – timepieces whose experimental technologies find a commercialised home here in the watch’s Calibre UN- 250 movement, the first self-winding engine ever installed into a Freak watch. But let’s start with the chassis – or the hull, if you will, in keeping with the maritime theme – which on my review model is made of brushed platinum and measures a substantial 45 mm in diameter. This case sports a new, streamlined design, made thinner than its predecessors by the addition of a flat, box-type sapphire crystal over the dial, which is also made of sapphire. Marine-blue rubber inserts in the case flanks add a touch of nautical air; the one on the left side features a small metal badge, held in place by screws, engraved with the timepiece’s limited edition number. The use of a box crystal allows the watch to have a thinner bezel, which is made of titanium with a blue rubber lining that matches the lateral inserts, the central disk on the dial and the strap. As on previous Freaks, this turning bezel is used for setting the time, so it is enhanced with three claw-like triangular riders for easy gripping. The time display itself is, in short, classic Freak: a “flying carrousel system” in which there are no hands, only a baguette-shaped movement rotating on its own axis, with a bridge pointing toward the minutes, while a rotating disk mounted on the mainplate indicates the hours. Not coincidentally, the minutes bridge on the Freak Vision, which traverses the dial once per hour, somewhat resembles, from above, the silhouette of a sailing vessel. The hours and minutes indexes are engraved into the sapphire periphery of the open dial.

Perhaps we’re getting ahead of ourselves. If you’re a “Freak Virgin” – strapping this watch to your wrist for the first time, with the watch itself unwound and un-set – the process can at first be a little intimidating. On a dial without hands and only the barest hint of hour markers – and, perhaps even more terrifying, no winding crown – how do you figure out how to get this timepiece in working order? Which end, in fact, is even up on this crazy dial-that-is-not-a-dial? At first, you may be tempted to orient things based on the Ulysse Nardin logo, but this would be a mistake, because the logo is inscribed onto the rotating disk that moves around the dial with the passing of the hours. What you want to do is use the locking rectangular button engraved with the word “Freak” as your point of reference: it is at 6 o’clock, thus if you’re reading it right-side up, the watch is in its proper (well, at least its easiest-to-use) setting position.

Again, there is no crown (no Freak model has ever had one, at least not until just this year, with the SIHH 2019 introduction of the stripped-down, entry- level Freak X), so the winding and setting are accomplished by the front and back turning bezels. Besides providing orientation, the “Freak”-inscribed button serves a more utilitarian purpose as well: you flip it up from its locked position to unlock the dial-side bidirectional rotating bezel to set the hour and minutes indication. The three metal “claws” positioned around this bezel provide some traction (not a lot, but just enough) for your fingers to grasp as you move it in either direction. As you begin turning the bezel, you’ll start to see the white triangle pointer that designates the hour moving from index to index, while the ship’s hull-shaped minutes-bridge mechanism, with a large oscillating balance wheel on one end and a small white pointer on the other, also moves clockwise around the sea-blue expanse of the dial, its pointer indicating the minute. Believe it or not, once you get used to this arrangement, and keeping track of the two pointers becomes more intuitive, reading the time on the Freak Vision is actually easier than on some other watches with traditional analog displays. It helps that the contrast between the metallic mechanism, white pointer and shiny blue dial are so stark.

Turn the watch over and you’ll find another turning bezel, made of lightweight titanium, framing the six-screwed caseback. This is the one that the wearer turns counter-clockwise to fuel up the movement with its 50 hours of power. There are indentations for fingers to grip and even a “TO WIND” indication with an arrow to help out the newbie, but winding the movement this way is not the easiest task in the world, especially for larger fingers. The front setting bezel, in fact, also presents some challenges in this regard, especially since one can unintentionally knock the locking button closed while turning it. Of course, one of the benefits of the automatic winding system is that, unlike the Freak Vision’s many manually wound predecessors, you shouldn’t need to perform this operation much if you wear it regularly. 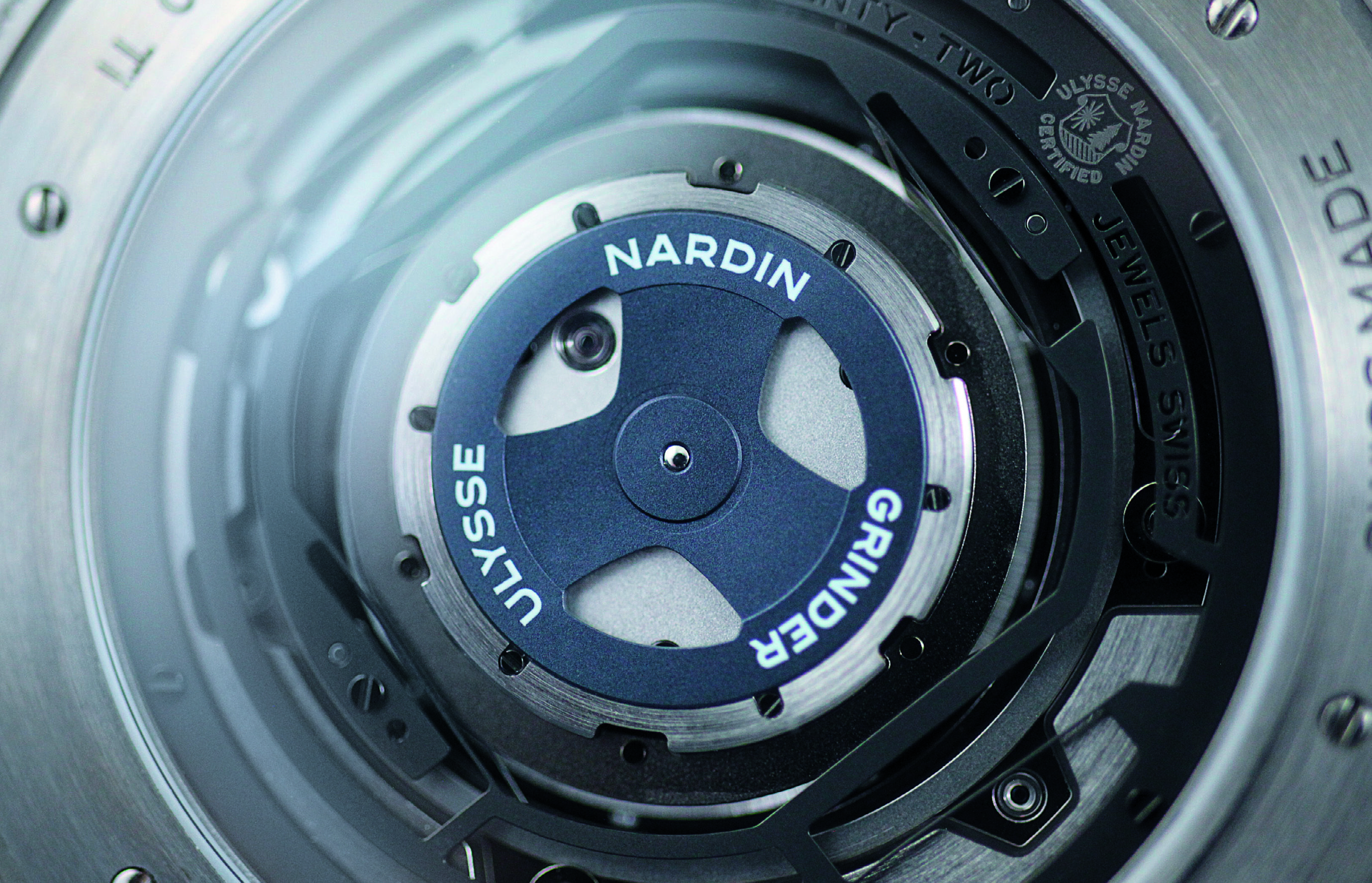 Which brings us to Calibre UN-250 and the existing and new innovations that Ulysse Nardin has packed into it. Before we get into the interesting way in which this movement winds itself, it’s worth mentioning some other elements that make it notable. There is, of course, the presence of silicon in several prominent parts. While fairly ubiquitous in watchmaking now – brands from Rolex to Omega to Patek Philippe to Tissot use silicon in their movements these days – silicon was a highly unproven material when Ulysse Nardin used it for the first Freak’s “Dual Direct” escapement in 2001, its unquestionable attributes (antimagnetic properties, lightness, corrosion resistance and low friction, which negates the need for lubrication) balanced by its potential pit- falls (its brittle, delicate structure).

Judging by how many brands have embraced this material, Ulysse Nardin’s early faith in it seems justified, and its use of it continues apace in the Freak Vision movement. Silicon (or silicium, as francophiles and Ulysse Nardin itself, are apt to refer to it) is used for all the components of the so-called Anchor Escapement, which has been designed in a way that supplies constant force to the watch. It has a circular frame, with a friction-free pallet fork fixed in its center and supported by two small blade springs that are mounted perpendicular to each other. The bending, curving force applied to these springs stabilises them, maintaining the oscillations of the balance wheel at a constant rate, negating the influence of torque variation from the mainspring. Thus the watch should maintain its accuracy consistently across those 50 hours of running autonomy.

The balance wheel is also made of silicon, as in other Freak movements, but Ulysse Nardin’s watchmakers made this one even more revolutionary by welding solid, inertia blocking nickel weights, in a patented design, to the already super-lightweight wheel, along with a set of stabilising silicon micro-blades. The combination gives the balance a smaller mass in its centre and a higher moment of inertia on its periphery. This type of silicon balance wheel was one of the 10 innovations packed into the InnoVision 2, which used gold weights instead of nickel ones. 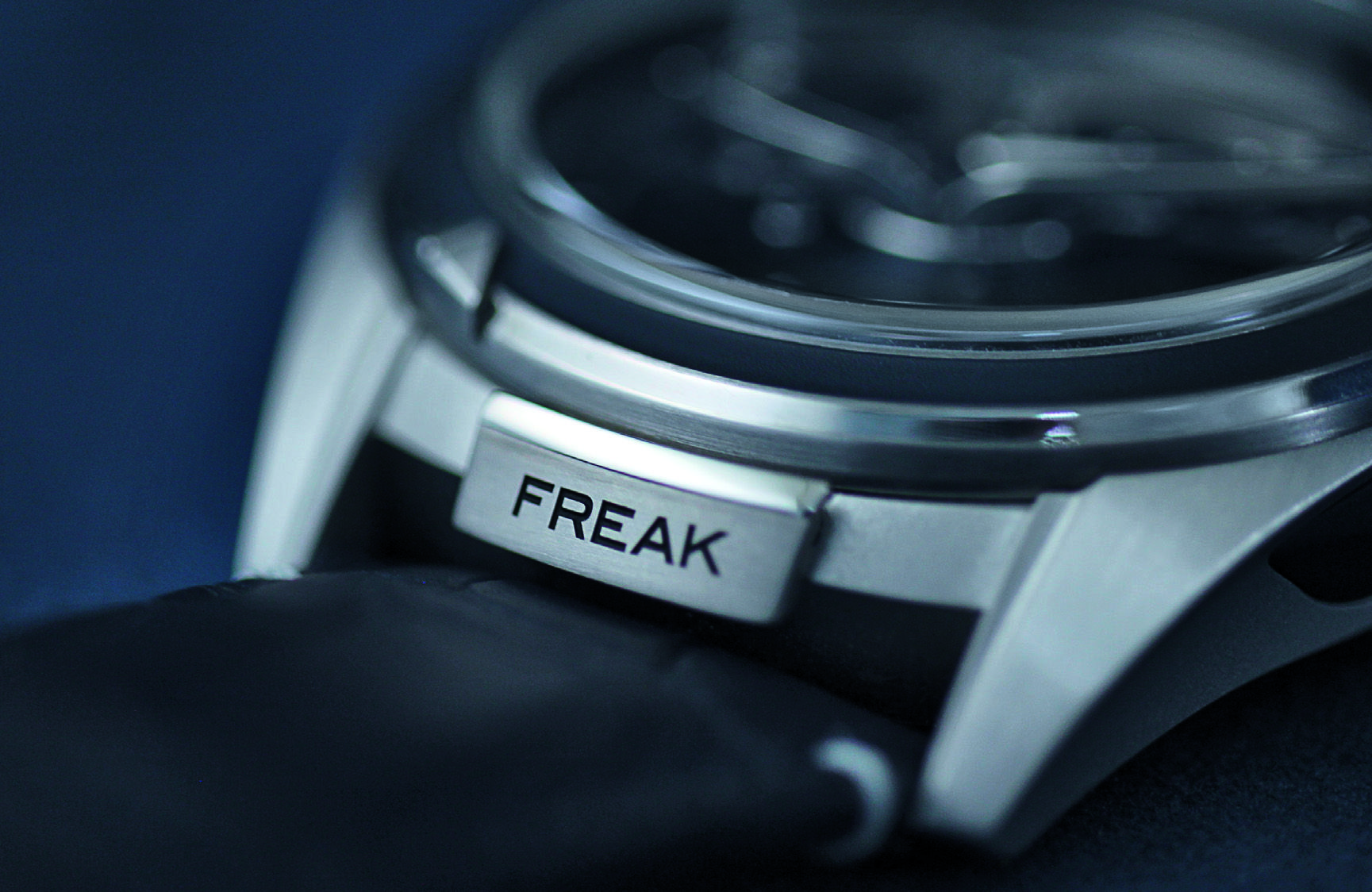 The other major invention from the InnoVision 2 to find its way into this watch is the so-called Grinder automatic winding system, which is on display through the sapphire window in the back. It has been designed to optimally take advantage of even the slightest motions of the wearer’s wrist to supply power to the movement. Its central ball-bearing rotor, with three smaller ball bearings beneath it, is linked to a four-armed frame that provides twice the torque of a typical winding rotor, which is bidirectional with two levers and thus subject to periods of inefficient idling. Ulysse Nardin compares the Grinder to a bicycle with four pedals instead of two: it’s more constantly in motion and the flexibility of the frame allows even the smallest of the wearer’s movements to convert into kinetic energy for the mainspring. Better still, it’s all connected to what Ulysse Nardin terms a “flexible guidance mechanism,” which drastically limits friction.

Under a loupe, as one would expect, all of these mechanisms are fascinating to behold, on both the dial side and the back. Furthermore, as alluded to earlier, one of the most appealing aspects of the Freak – its eye-catching dynamism resulting from the exposure of moving mechanisms normally hidden from view under a traditional dial – is enhanced here with a stylish, thematic throwback to the brand’s past. The specially shaped baguette movement bridge that dominates the timekeeping ensemble calls to mind, in its hourly journey around the azure dial, the image of a historical sailing ship, drifting placidly through blue ocean waves.

The Freak Vision is mounted on a rubber-like dark blue alligator strap that echoes the nautical blue tone of the dial and integrates stoutly into the ergonomically curving lugs for a comfortable wrist fit, secured with a folding clasp made of titanium – Ulysse Nardin recognising comfort, of course, as among a prospective owner’s top concerns even in light of all the watch’s micro-mechanical mastery. The more modest, but still substantial, case dimensions compared to its predecessors also helps the watch nestle unrestrained under most shirt cuffs, and its blue-and-silver colour scheme makes it look as dressy as any Freak watch ever has – less like a giant exposed movement on the wrist and more like a luxury watch with an avant-garde high-tech face – one that strangers will notice and ask about, and that you will feel justifiable pride in showing off.