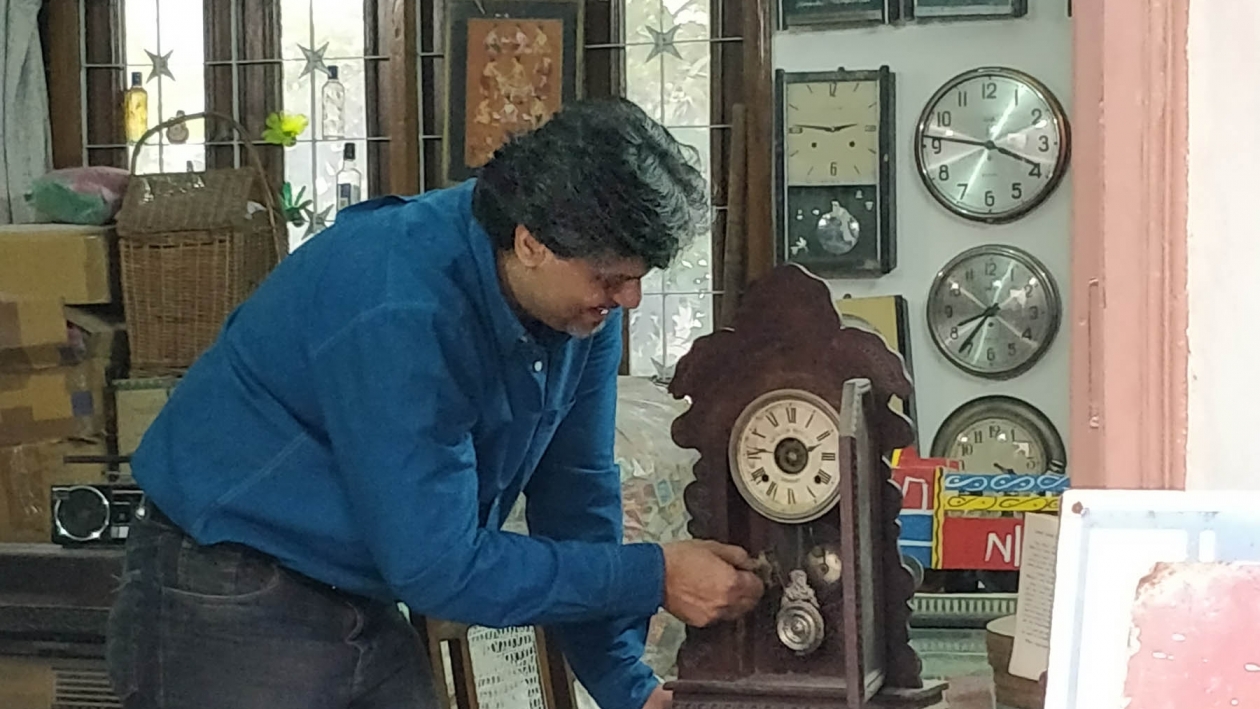 Antique collector Aditya Vij on his love for clocks and his plans to start an antiques museum for the next generation.

The sun glistened atop the blue Hudson Super-Six resting in the foyer. It was a bright winter afternoon and, once the initial admiration for the 20th century car was over, I sauntered into the spacious bungalow in West Delhi and was immediately transported back in time. A surreal mix of wall clocks, table clocks, vintage cameras, murals, telephones, gramophones and typewriters greeted me; some arranged in neat rows and some

"In a constantly changing world, where technology is the dominant force and objects become obsolete within three months, I thought why not protect what is going to change. That is how my journey began."

stacked to resemble mini-pyramids. There was chaos, but also a method to the madness. Every object, however big or small, had its own place of pride, put together painstakingly by Delhi-based artefacts collector Aditya Vij. “Losing out on anything old or that once existed makes no sense to me,” says the 44-year-old, popularly known as the ‘History Hunter’. Exploring his residence is almost like taking a museum tour; there are antiques spanning across 18 to 20 categories, including vintage cars, books, fossils and British memorabilia.

Interestingly, it is his degree in anthropology that fuels his passion. “In a constantly changing world, where technology is the dominant force and objects become obsolete within three months, I thought why not protect what is going to change. That is how my journey began,” says Vij, who also teaches management as a guest faculty in a few Delhi colleges. “With every piece, I try and visit the past, track the evolution and discover how it impacted society. My idea is to document it for others in a simple manner. Once a thing is gone, it’s impossible to get it back. Just by looking at a picture, one can never replicate the same emotion. My ambassador car was bought from a scrap dealer and restored. Today, it is up and running. I do not expect the present generation to understand the emotion associated with sitting behind the wheel of this vintage beast. Similarly, if I see a mechanical clock, I have to buy it, no matter what condition it is in. I may not use it, but it will always narrate a certain tale.” 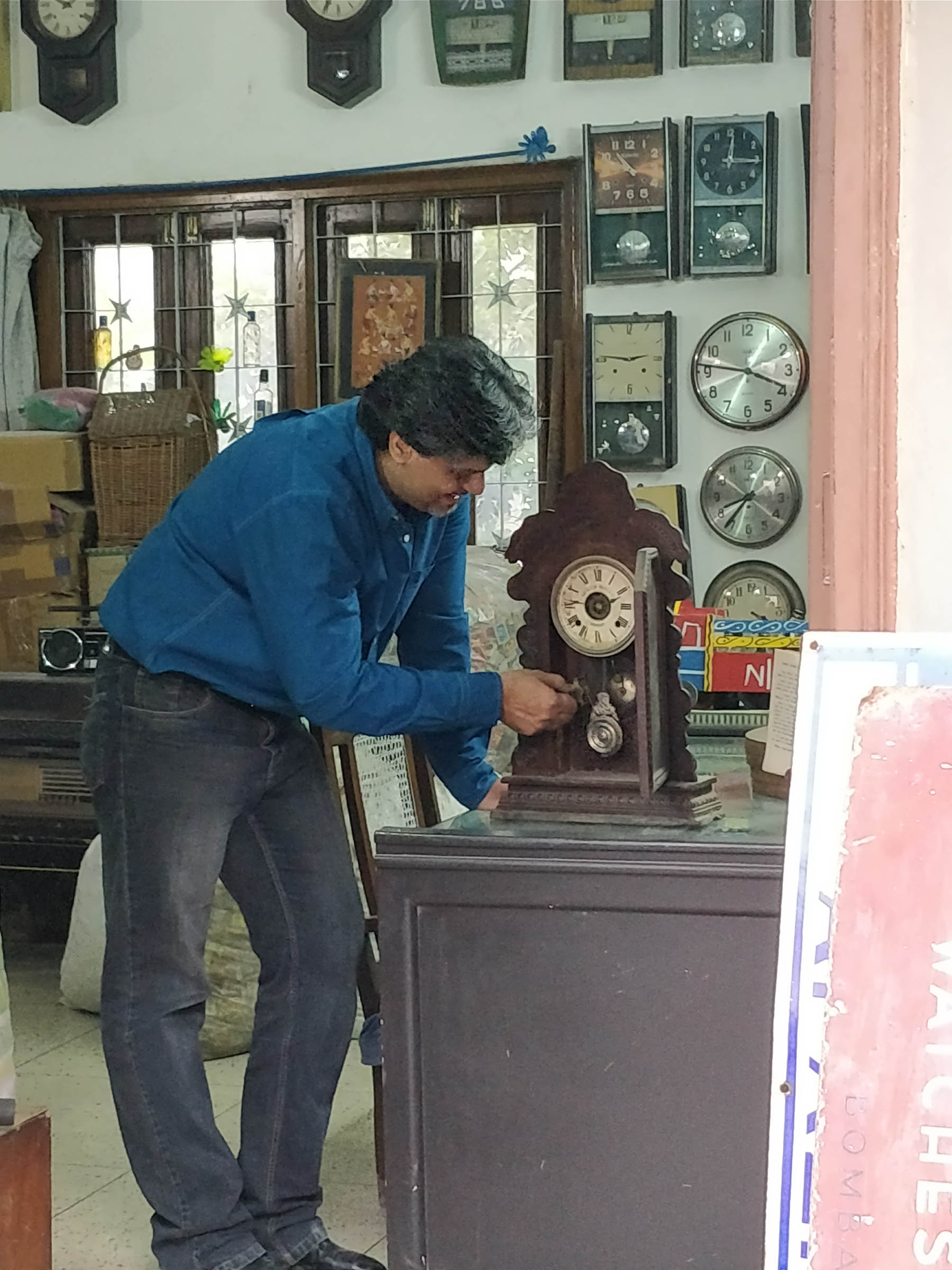 Vij started putting things together very early. His fondest memories are as an eight-year-old, gathering matchboxes. “The credit goes to my father, who collected books. He would explain the concept behind the unique designs and how they revolutionised society,” he says. Today, Vij owns close to 10,000 different matchboxes, which are sorted and another 10,000 for which he hasn’t found time. “I have always been a history

"The movement inside a mechanical watch is a mind-boggling puzzle and no digital or quartz piece can replicate that art."

buff and that drew me towards antique wall and table clocks,” he says. “The intricate mechanism and the stories around these pieces fascinate me. The concept of mechanical clocks came with the British Raj. We never manufactured our own. It was only several years post independence that watchmaking started, with HMT setting up a division in 1961. But, it was only wristwatches. Clocks were still being produced in collaboration; the movements would come from overseas and be assembled in India, like in the case of Favre-Leuba Jaz.”

Currently, Vij has 350 wall clocks and about 1,000 table clocks. Of these, 30 per cent are functional. “I could easily reach 70 per cent if I get the others serviced,” he says. “Initially, I used to repair all my table and wall clocks but, with time, I realised it was very expensive as one has to keep importing parts for the movements or get them made. Now, I don’t restore every clock, but only unique pieces. Luckily, I still know two octogenarian watchmakers who have an in-depth understanding of clocks and help me out whenever needed. I don’t know who is going to do this after them because I feel the new generation is not really taking to this profession. The movement inside a mechanical watch is a mind-boggling puzzle and no digital or quartz piece can replicate that art.” But, how does he source the clocks and check for authenticity? “There are agents across the country with whom I have established a good rapport over time. So, I keep getting an offer every now and then. There are also a couple of online platforms. Also, it helps to be well-networked with your local scrap dealers,” he says. “I spend more on procuring new pieces. I purchased 23 wall clocks from a shop in Meerut that was going out of business. I have also purchased 97 table clocks from a shop in Delhi, which was prepared to junk them.” 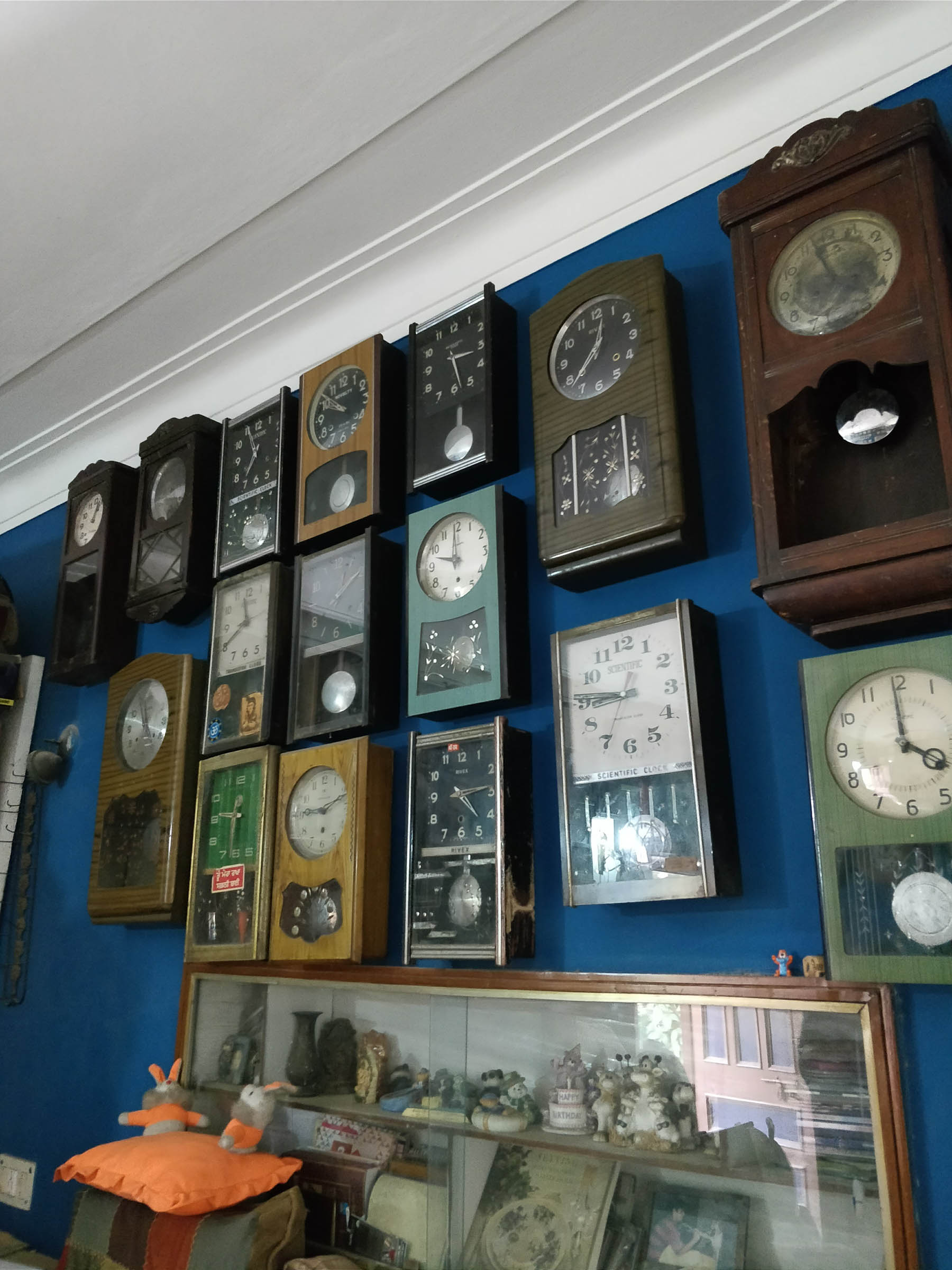 Vij says his main goal is to save these fragments of history from dying in a smelting furnace. Experience has also taught him to check for

"However, I want to create a museum for the next generation. We are a growing economy, being constantly pushed to buy more. But, one cannot enjoy the present without understanding the past. I have talked with various government bodies, but I haven’t received any positive response so far. If not now, I will make one for sure before I die."

authenticity. “I once picked up a clock only to realise later that the movement was missing. Now, I always ask for even the minutest item that accompanied the original, whether it’s a rotting box or a scrap of paper,” he says.

Completely self-taught, Vij says that observing the restoration process also helped him learn a lot. However, he refuses to pick a favourite. “Anything vintage is exciting for me.” To me, however, the Russian cuckoo clock from the late 1970s stands out. “I got it from my local scrap dealer and it was in a bad shape as the chains were entangled,” he says. “I got the springs changed so that the clock would chime with the cuckoo striking simultaneously.”

Vij also has plenty of Ansonias because they were relatively easier to procure. “Till the time the Britishers were here, the country was inundated with Ansonia and Smiths clocks,” he says. “Anyone who could afford a clock was most likely to opt for one of the companies.” He also has a Royal Air Force clock that came through an agent.

Then there are a couple of Northern Railway Anglo Swiss clocks. “From early 1950s onwards, one could find them all over government offices, courts and railway stations,” he says. The collector also owns mechanical pieces from HES, a Mumbai-based company, which started making wall clocks in the 1970s. “It was sold till the 1990s and borrowed technology from Germany and Japan. The company focused on alarm clocks that were distinguished by bright dials,” he says. The scientific clocks in his collection were manufactured in Gujarat. “Glass etching was introduced in wall clocks, which did not exist during the 1970s. These served as staple house- hold showpieces,” he says. 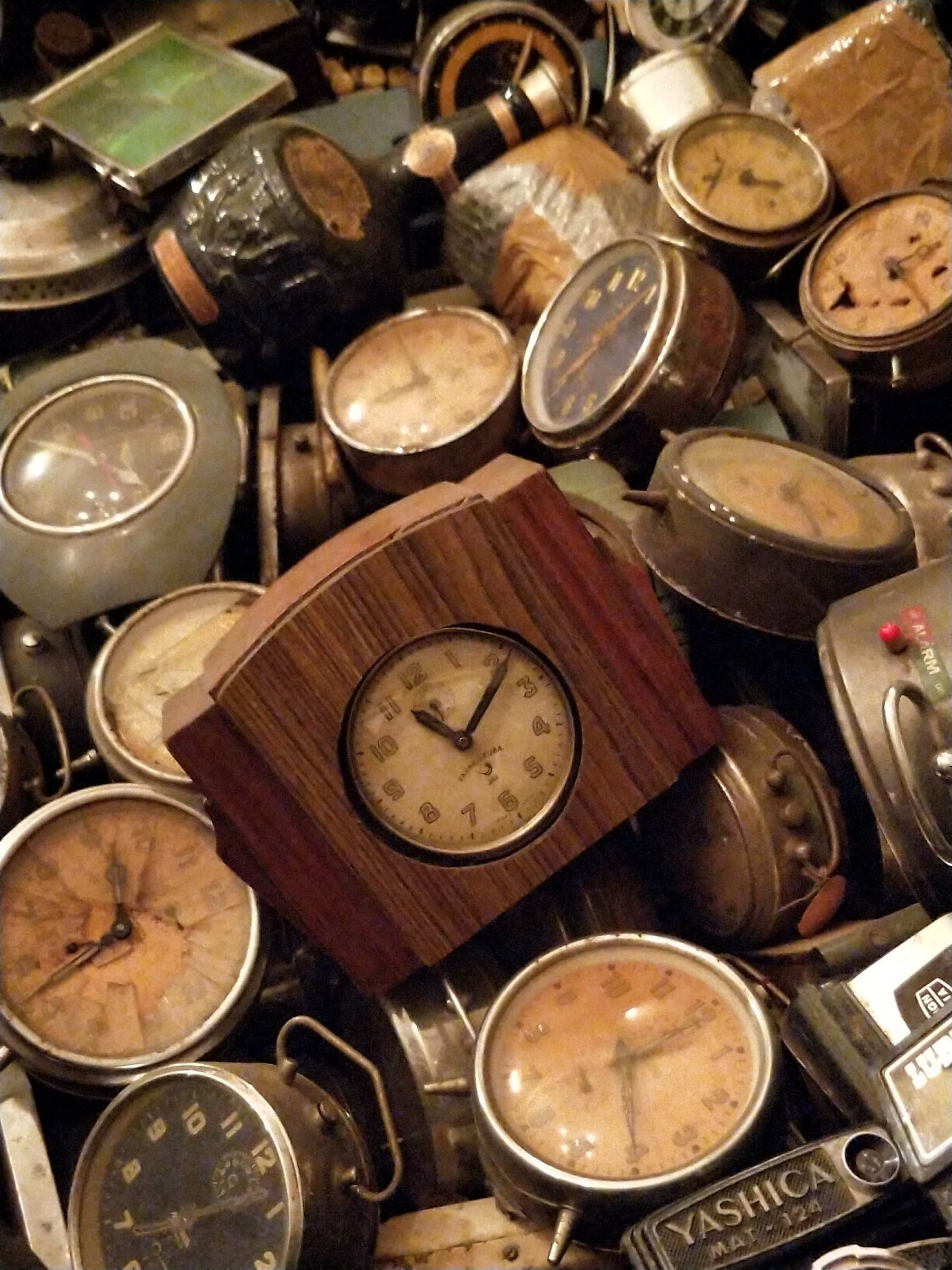 Vij also has a couple of Seikosha clocks. “This was Japan’s answer to British, German and French timepieces,” he says. “I sourced most of them from Kolkata and southern India.” One can also see The Napoleon ticking on Vij’s wall of fame. “It is actually an American clock. From 1920 onward, America started exporting clocks when they realised the market was outside their region, mostly in the British colonies. So, they pumped in items with the help of local collaborations, which helped in customising these clocks. Seth Thomas clocks were also manufactured on the same lines,” he says. Then there are the Wehrle clocks from Germany. “The Three-in-One alarm clock is iconic and is a must in every collector’s stash,” he says. The table clocks are from brands like West End, HES, Favre-Leuba Jaz, Big Ben, Europa, Swito and Jayco. Vij also owns 55 HMT wristwatches and wears a different one each day. 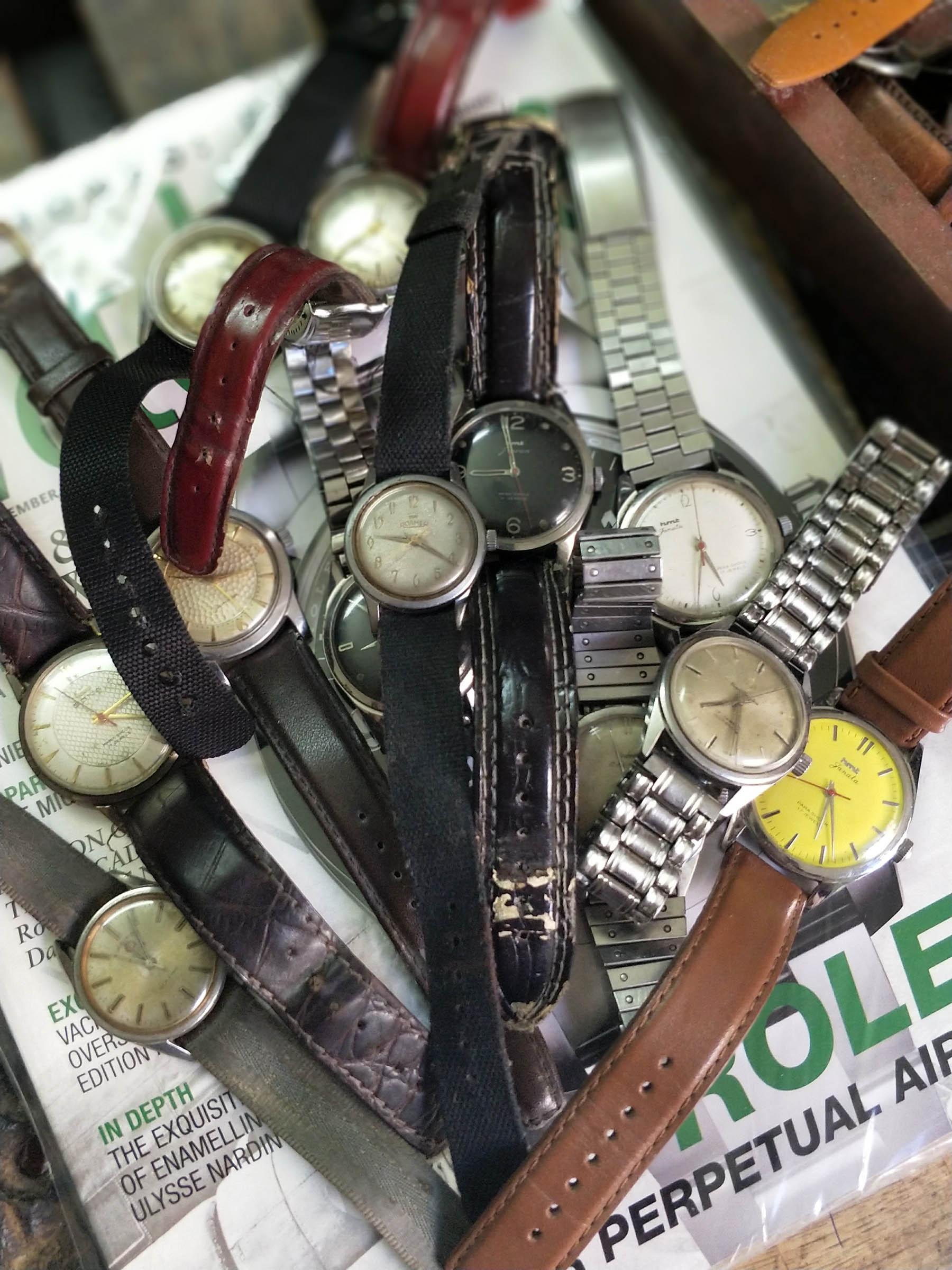 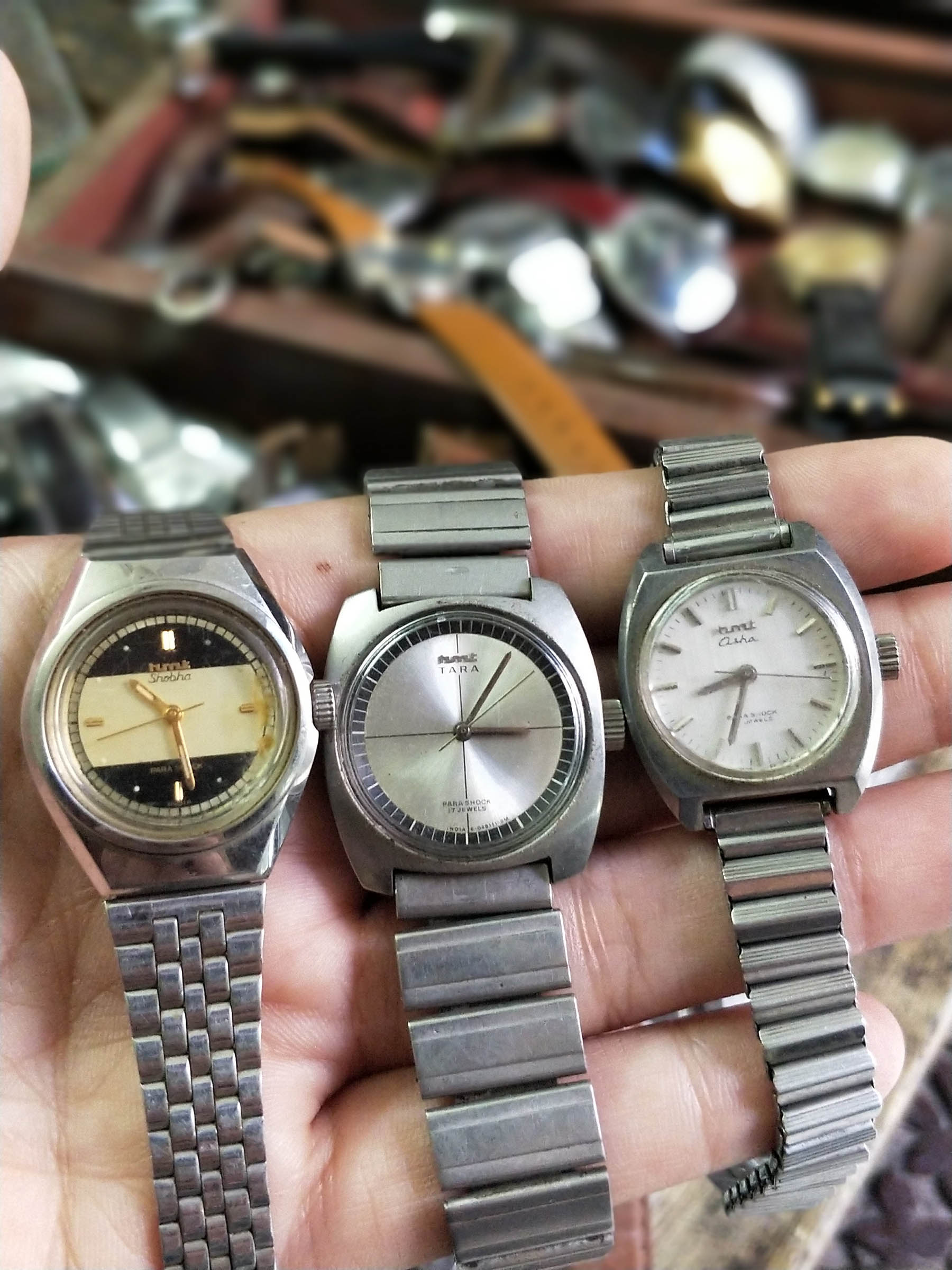 So, will he ever sell his collection? “No. If I sell it, I will end up buying more. However, I want to create a museum for the next generation. We are a growing economy, being constantly pushed to buy more. But, one cannot enjoy the present without understanding the past. I have talked with various government bodies, but I haven’t received any positive response so far. If not now, I will make one for sure before I die,” says Vij who, when not immersed in antiques, seeks solace in gardening. 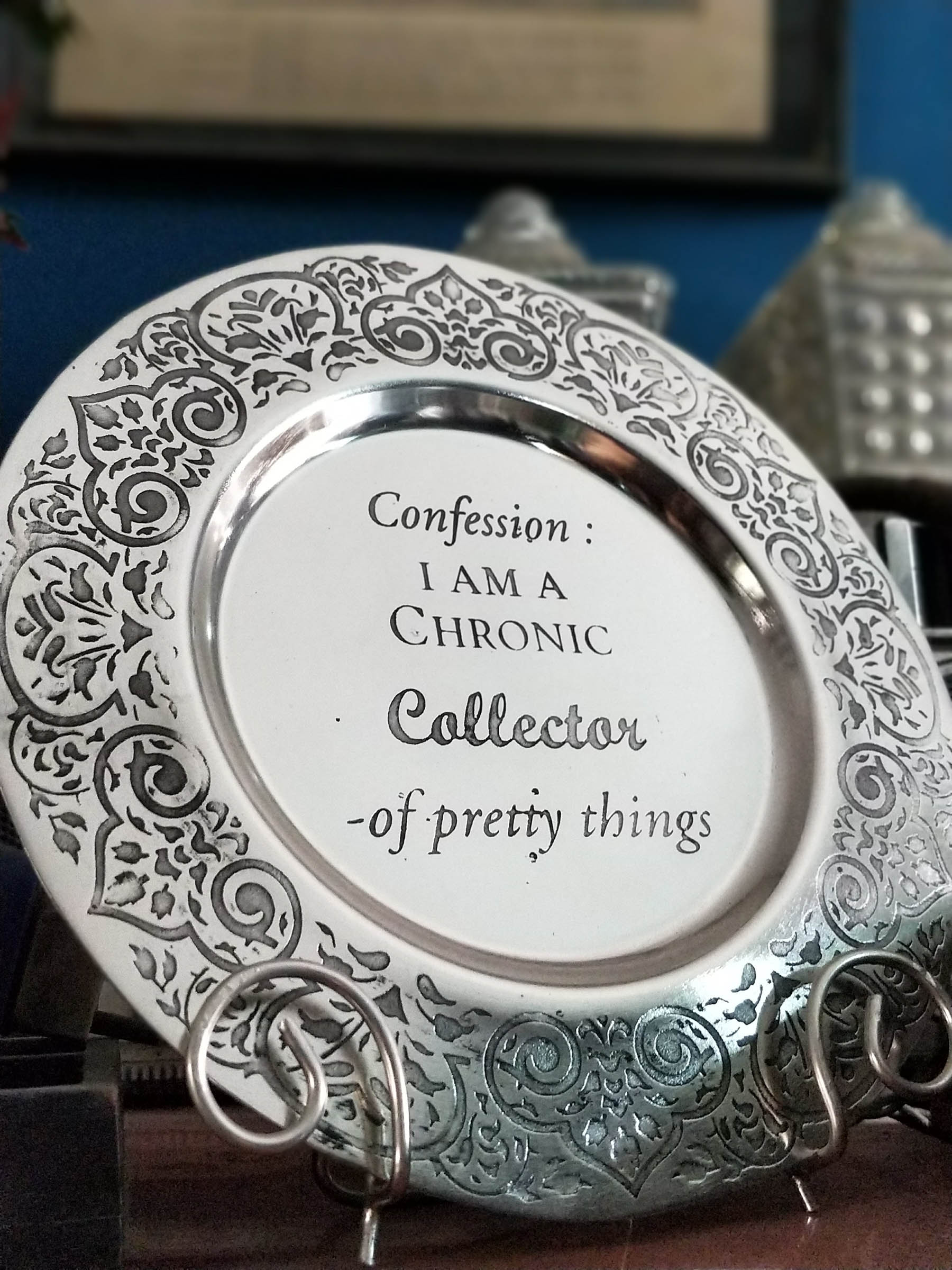