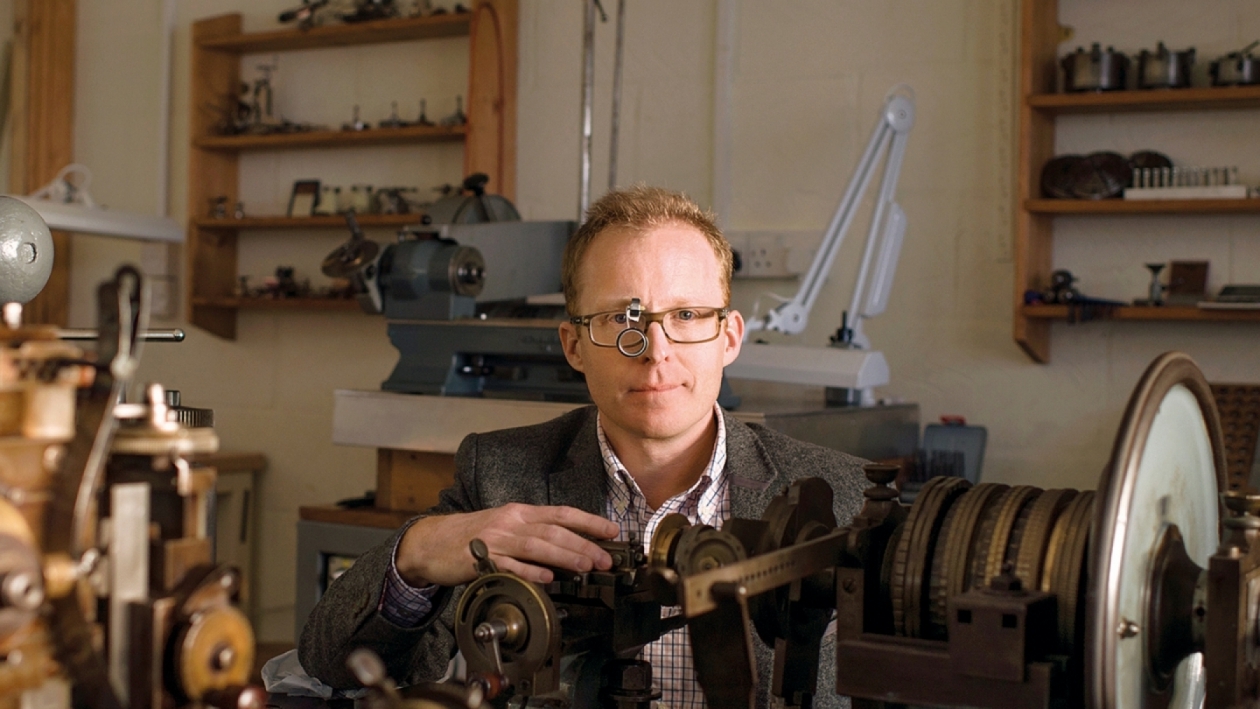 Once an apprentice to the revered George Daniels, Roger W. Smith is considered the greatest British watchmaker today.

A protégé of the revered George Daniels, Roger W. Smith has had to assume the mantle of Britain’s pre-eminent watchmaker for close to a decade now following the demise of his mentor. Awarded an OBE (Order of the British Empire) this year for his services to British watchmaking, Smith is renowned for producing watches by hand in the splendid isolation of the Isle of Man using the traditional methods espoused by Daniels.

At a time when it feels like main- stream brands are running out of ideas to reel in new buyers, clients have to wait close to three years to get their hands on a Roger W. Smith wristwatch, which may cost them in excess of `1.02 crore (approx.). These timepieces produced by Smith and his team follow the Daniels’ Method where every component is made from raw materials in the Isle of Man studio without the use of repetitive or automatic tools. In what is an antithesis to the assembly line production that is the norm in the main- stream industry, a watchmaker must master 32 of the 34 skills requisite in handcrafting a watch to be able follow ‘The Daniels Method’. He set up Roger W. Smith studio in 2001 “with our un- swerving ethos to only craft watches by hand.” It takes the studio about 12 months to complete a watch, it can take weeks just to engine-turn the dial of a Series 2 wristwatch.

“As a result, production will always be low – we only make 10 pieces a year,” says Smith when we caught up with the soft-spoken watchmaker during the Horology Forum hosted by Dubai Watch Week and Christie’s in London last September. “The new workshop will let us take on some extra staff and extra pieces of equipment. We might increase production to about 13 pieces a year spread across the range of five models.”

Smith was bequeathed Daniels’ workshop following the latter’s demise in 2011. “You’ll never hear of us making 50-100 watches a year. That is just not possible with the kind of techniques we use in the workshop and the direct link back to the Daniels Method, which is very important to me.”

Switzerland may be synonymous with high watchmaking today (although some might argue the German town of Glashütte is more deserving of this accolade) but let’s not forget that some of the most important inventions in horology are attributed to British watchmakers. To recap, the balance spring was invented by Robert Hooke in 1664, Thomas Prest is credited with introducing keyless winding to watch- making in 1850. More recently, George Daniels invented the co-axial escapement in 1974, considered by many as the greatest invention in horological history in the last 250 years.

The decline of British watchmaking began in the 1850s with the advent of industrialisation. British watchmakers couldn’t cope with the cheaper, more industrialised pocketwatches that were produced in the United States. “You could buy a very high quality American pocket watch for a third of the price of a British one and that really was the start of the decline,” says Smith. The next big nail in the coffin was when Switzerland industrialised the wristwatch-making process in the 20th century. By then Britain was losing the skills required to stay in the game.

In the last decade or so, a clutch of British brands have risen to prominence. While the aviation-inspired Bremont has a more mainstream focus, boutique brands like Charles Frodsham and the Birmingham-based Struthers have own the age for artisanal watch- makers. But for the best part of the decade, Roger W. Smith was the only British watchmaker.

“It is difficult. Once an industry disappears from a country, it is very difficult to replace that,” says Smith. “Yes, we are employing people and training them in our methods. I’m hoping that one day someone will leave my atelier and start his own watchmaking company. In the early days, it’s always going to be small, but there are things happening. Struthers, Bremont and Frodsham are all doing their good thing. These are tiny steps but it can only be good news for the industry. When I started, there was just George Daniels in England, there was Derek Pratt but he was in Switzerland.”

With mainstream production of watches increasingly becoming more assembly-line driven, it’s getting harder to find people with the right skills. And it’s not a problem isolated to Switzerland alone. “There were always people willing to come and work but the challenge has always been finding the right people, those who are willing to learn, not only from me, but also in their own time and develop their skills,” says Smith. Unlike Philippe Dufour, the great Swiss watchmaker who prefers to work alone because he reckons his exacting standards often intimidate young apprentices, Smith says he en- joys working with people. “Provided you give apprentices the right training, it works. I enjoy the process.”

Roger W. Smith watches now feature his latest single wheel version of the Daniels co-axial escapement. In Smith’s version, the upper and lower wheels are combined into one by add- ing raised ‘teeth’ onto the lower wheel. This would result in the escape wheel being made in one single operation and removing a potential source of error. Smith recalls the conversations he had with his mentor about the single wheel escapement. “He could see the bene ts to it and how it was going to improve timekeeping. As a result of that, we t- ted the single wheel into the Daniels Anniversary watches that I built for George,” recalls Smith.

“Today, we use a Mk II version, a more scaled-down version of this. And it’s proving to be a staggering escapement. For me, the real qualities of a co- axial escapement are coming out now – the difference in efficiency is remark- able and it’s thanks to the pushing action of the escapement. But in scaling it down, we are still driving the same balance, we have managed to reduce the mainspring strength significantly,” says Smith.

The result is that there’s less wear now in the winding of the watch and service intervals have now been extend- ed. Smith says that although they advertise 10 years on the website, he believes these watches could run for 15-20 years or more without requiring any service. “That’s unheard of in the industry and it’s thanks to this brilliant escapement combined with the robustness of the watches. My watches are strong, they are built to last. They are built on the same proportions as British pocket watches. Today, you can buy an English pocketwatch that is 300-400 years old and it will keep as good a time as it did when it was first made. And that was because of its robust construction and that’s the same sort of principles that I use in my watchmaking,” he explains.

The development of Smith’s escapement has been a slow burn. He started working on it in 1998 with Daniels and he first fitted a co-axial escapement into his Series 2 watch, the first production watch in the world to have been de- signed to t this escapement. “It’s been a long slow development period for this escapement and we have learnt with every single watch we have made since. You make slight adjustments to the escapement and you realise the improvements it begets,” he says.

The Isle of Man is a little land mass in the Irish Sea between Great Britain and Ireland. Not exactly the most accessible place on earth, but if there’s one thing that Smith and his crew have in common with the watchmakers of Switzerland’s Vallée de Joux, it would be their isolation. Over the years the advent of social media platforms like Instagram has helped Smith reach out to more people. “I use Instagram and YouTube to great effect and it’s enabled me to get to a wider audience. It’s been responsible in part for this resurgence in people trying to make watches. If you go on to Instagram today, there are many people out there who are trying to make watches. And that can only be a good thing,” says Smith.

While Omega was the first main- stream brand in 1999 to use the co- axial escapement in its Calibre 2500 movement, the Swiss brand has since combined it with a silicon hairspring in movements like Master Chronometer 8800. However, Smith isn’t convinced about the use of silicon in escapements at all. “You can buy a mechanical watch that is 300-400 years old and it will still keep time very well with a little service. What’s wrong with continuing to use these materials? I know these materials are tried and tested and I know that by using these traditional materials and methods, I can build watches that will be around for a hundreds of years. We can still replace components if need be. I don’t really know how anyone is benefitting from these new materials.”

“Our clients are very technically orientated, they are interested in the co-axial escapement,” he further ex- plains. “They would buy a Frodsham watch because I think they would like that double-impulse de- tent escapement. I think our typical customer has sort of remained the same over the years, which is a good thing for us, because we make very technical watches.”

The story first appeared on the April 2019 issue of WatchTime India. If you'd like to read more, access the archives by subscribing to the WatchTime India magazine here.