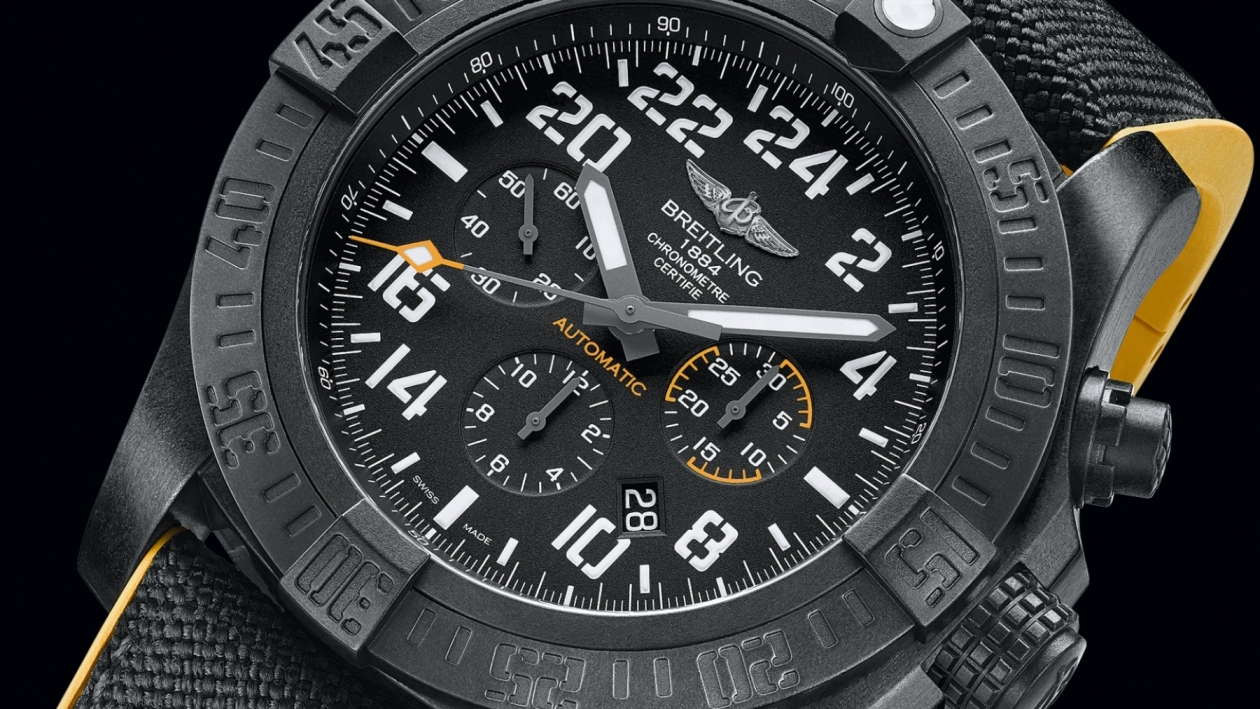 “Hurricane” is an appropriate name for the big Breitling Avenger Hurricane, which is light in weight yet extremely robust thanks to a newly developed material used for its case. By Jens Koch and Photos by OK Photography & Breitling

Breitling is synonymous with pilots’ watches and, in recent years, with watches with a military look. Now this Grenchen-based manufacture has really brewed up a storm. The Avenger Hurricane is extremely eye-catching thanks to its black, 50-mm-diameter case and its black and yellow textile and rubber strap.

A second look shows that the case has an interesting matte texture that looks somewhat like carbon fiber. It’s actually a newly developed material called “Breitlight” that’s used for the case, back, bezel and even for the push-pieces and crown. The polymer composite has some highly unusual properties and was specially developed for this watch. The material itself is very light in weight: it’s 5.8 times lighter than steel and 3.3 times lighter than titanium, but it’s reputed to be harder than both of these metals. It’s also corrosion resistant, antimagnetic, thermally stable and hypoallergenic. Breitlight feels warmer to the touch than steel and its matte surface has an interesting grain. 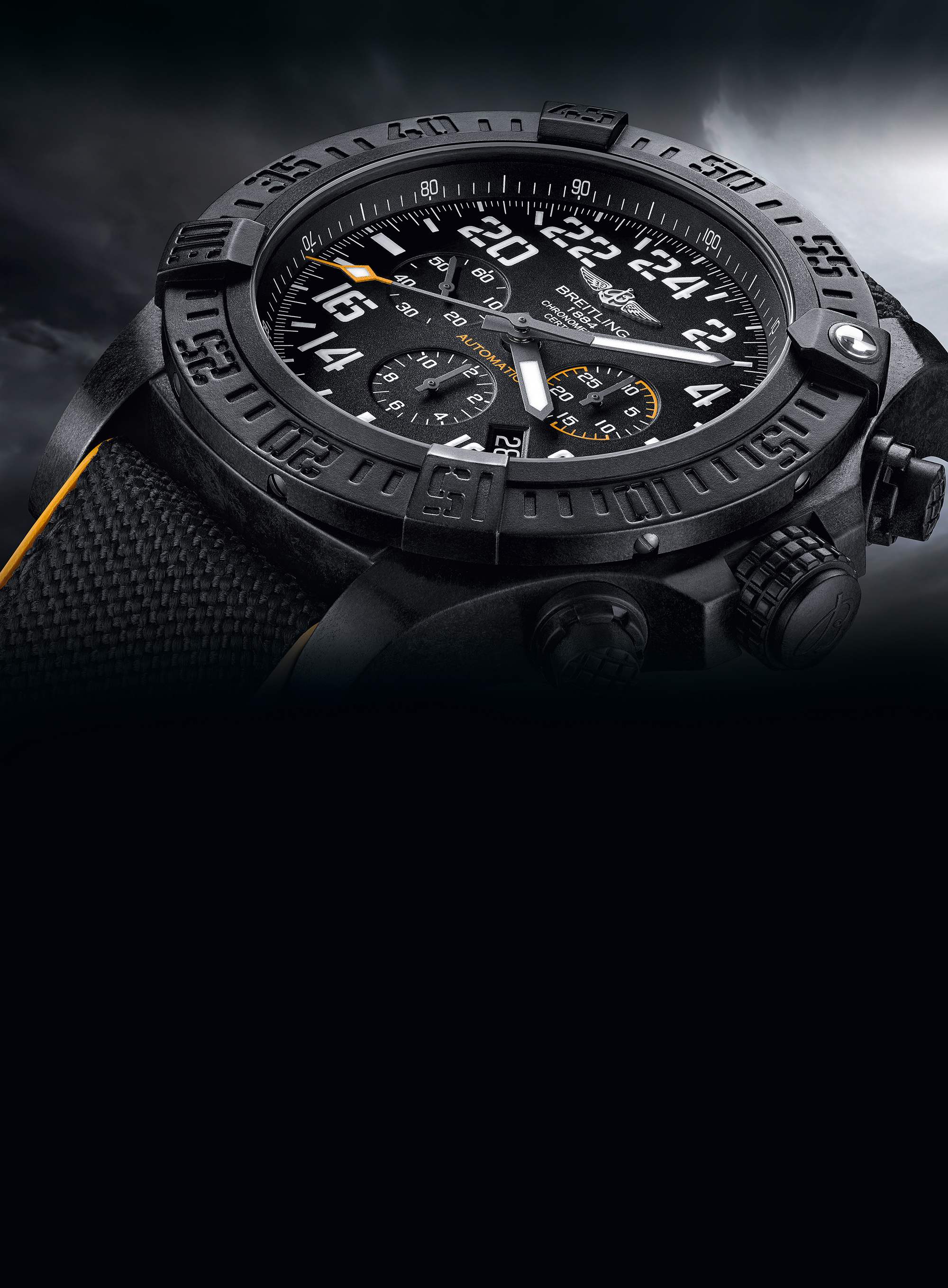 "Breitling uses a newly developed material called “Breitlight” that’s used for the case, back, bezel and even for the push-pieces and crown."

The military look of the case is further accentuated by a matte black dial with stenciled numerals, an eye-catching rotatable bezel with Breitling’s distinctive markers, and a black textile inlay on the outside of the yellow rubber strap. The colourful accents assure a sporty look. Those who prefer an even more martial appearance can order this model with an all-black textile strap. The watch’s design is harmonious and consistent. Its sheer size attracts admiring gazes, so whoever straps this watch to his wrist should bring along an ample portion of self-confidence.

Another special feature of this watch is the 24-hour display, which also traces its ancestry to the military. It replaces a conventional 12-hour display, so the hour hand needs twice as much time to complete one full circuit of the dial. The large dial offers optimum preconditions for keeping the legibility good despite the many calibrations, which show twice as many hours as usual. More often than not, the wearer can easily tell which hour numeral the hour hand is pointing to. But even after wearing this watch for two weeks, we still couldn’t read the time intuitively as one does on a watch or clock with a 12-hour dial. Every child learns that when the “big hand” points straight up and the “little hand” points to the right, then it’s 3 o’clock, even if the dial lacks a numeral 3 to confirm this fact. But if you’re wearing the Hurricane and its hands are in those positions, you first must search for the nearest numerals (4 and 8 in this instance) and then count the number of hour indexes between the tip of the hour hand and the nearest numeral. When you’ve accomplished this, you’ll know that the 24-hour dial is trying to tell you that it’s now 6 o’clock in the morning. If this sounds counterintuitive, you’re right: this display makes it significantly more difficult to quickly read the time. That’s the downside; the upside is that you always know whether you’re reading nighttime or daytime hours. Then again, the only situations in which you won’t be able to determine whether it’s night or day simply by glancing at the sun and recalling the sequence of the past few hours are when you’re aboard a submerged submarine (where the sun never shines), north of the Arctic Circle or south of the Antarctic Circle (where the sun never sets during the summer months), or slowly returning to waking life with your venetian blinds still shut after a long night on the town. 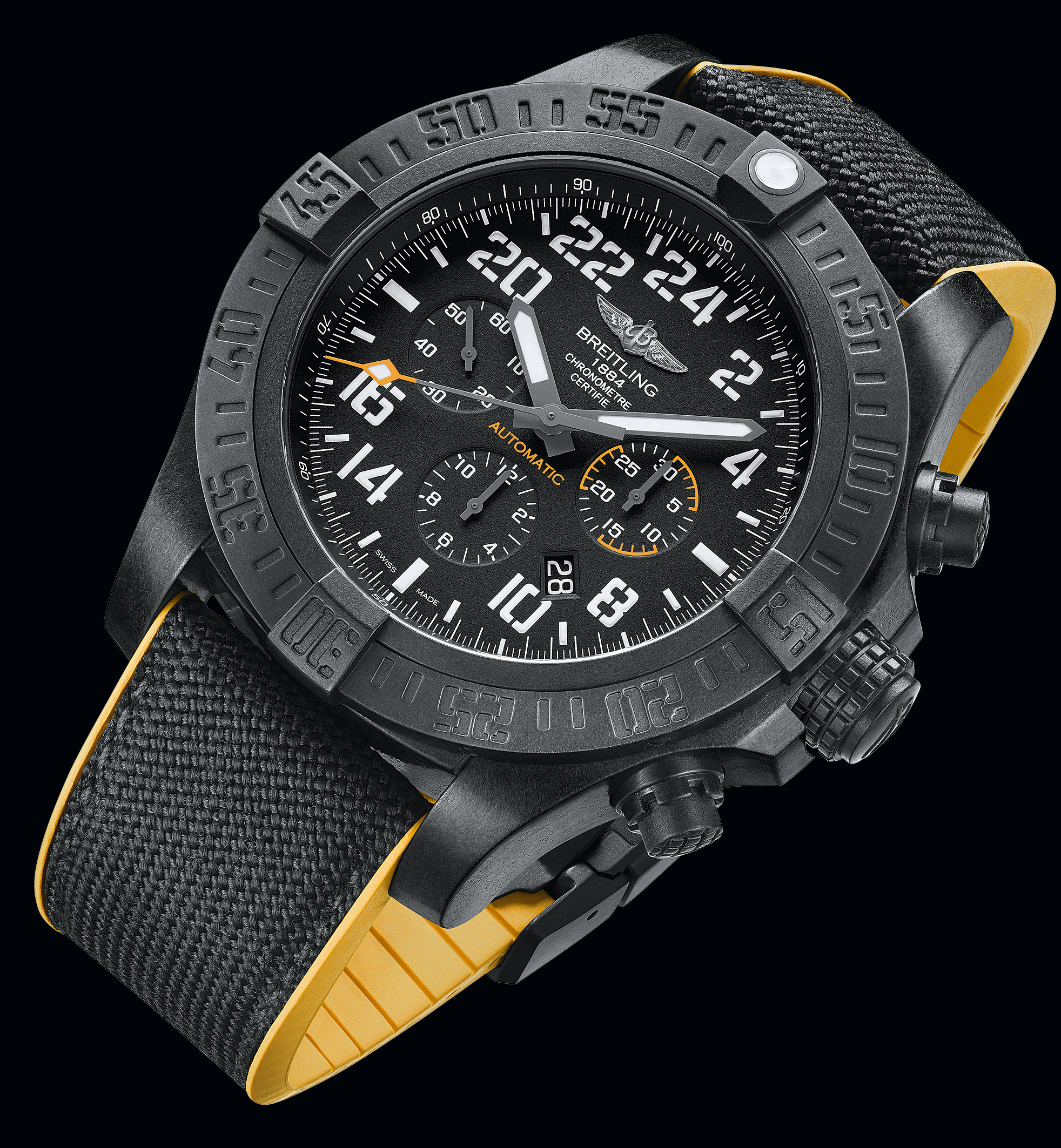 Although the 24-hour display is admittedly something special, we would be exaggerating if we claimed that it genuinely improves the usefulness of this watch. But this doesn’t have to always be the case for a luxury watch, even if it’s also a sporty one. After all, why should we always try to make everything in life easier for ourselves? Breitling’s developers seem to have thought along similar lines, and this inspired the brand to develop a chronograph movement of its own rather than simply encasing an ETA calibre. Based on the manufacture’s own self-winding chronograph Calibre B01, Breitling’s new Calibre B12 has its debut in the Hurricane Avenger. The basic B01 differs from the B12 only because the latter has a 24-hour display. Both calibres elegantly control the chronograph via a column wheel and each includes modern vertical coupling, which prevents the elapsed-seconds hand from shuddering when the elapsed-time function is switched on. 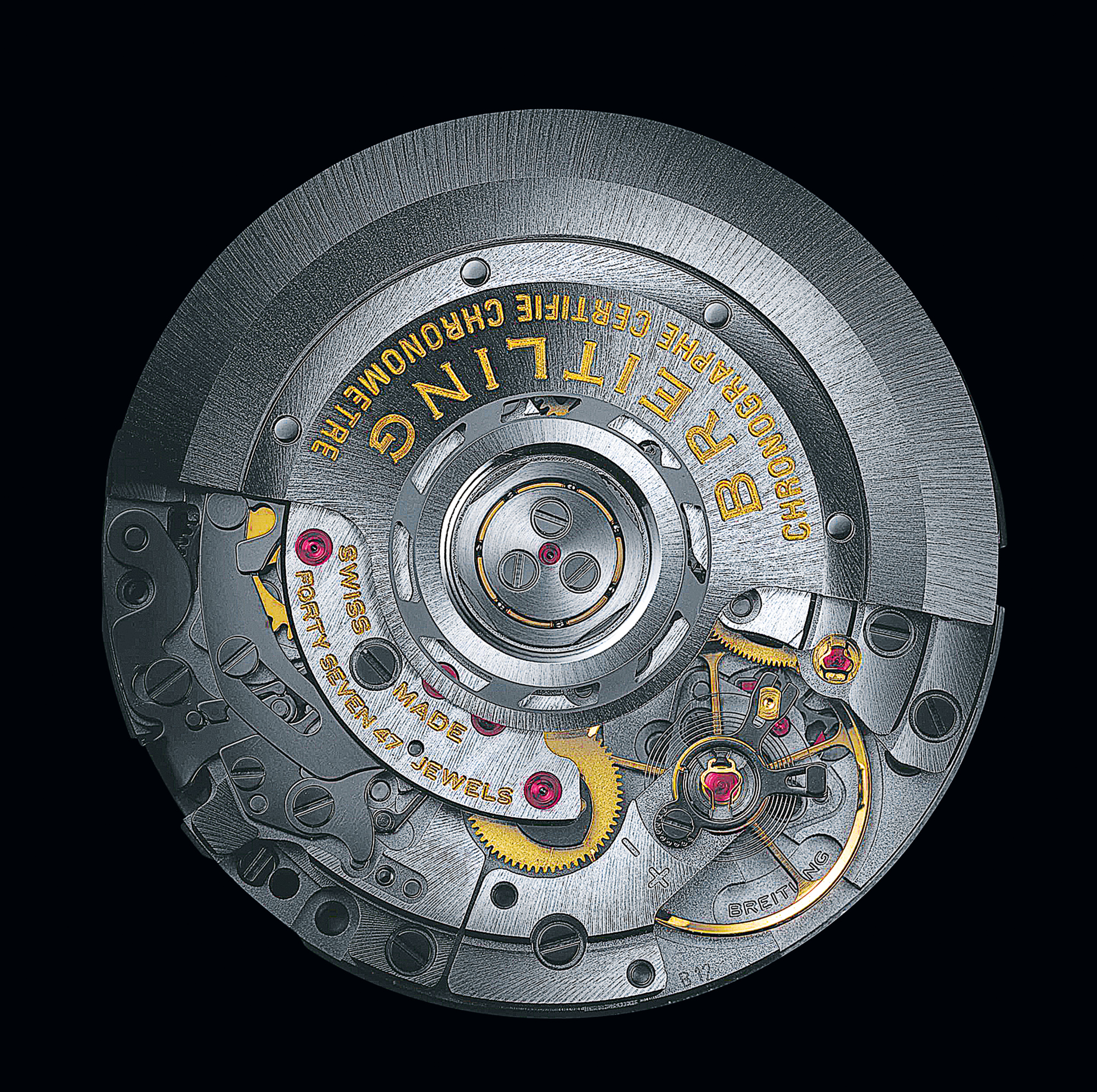 "Based on the manufacture’s own self-winding chronograph Calibre B01, Breitling’s new Calibre B12 has its debut in the Hurricane Avenger. The basic B01 differs from the B12 only because the latter has a 24-hour display."

Another special feature: both the escape wheel and the balance are equipped with shock absorbers so the movement is well equipped to cope with shocks and impacts. The rate can be finely adjusted by turning an eccentric screw, which slightly changes the position of the index and thus minimally alters the active length of the balance spring. The balance spring accordingly doesn’t “breathe” freely, which would have been even better.

Breitling doesn’t scrimp on decorative finishing, even though the opaque Breitlight back and its eight contoured screws don’t allow anyone to see it. After the back has been removed, a horological sleuth will discover a handsome sunburst on the partially skeletonized rotor, Geneva waves on the automatic winding bridge, a turning sunburst pattern on the other bridges, polished heads on the screws, gold filling in the engravings, and even a few bevelled and polished edges on the flat components. The base plate under the balance, by contrast, has no decoration. And although the stamped levers and springs are larger than their counterparts in an ETA 7750, these components show that costs did in fact play a role in the development of this movement. For quite some time, Breitling has sent all of its movements to COSC to be tested and certified as chronometers. The Avenger Hurricane that we tested gained just 5.5 seconds per day on the wrist; the daily gain decreased to 3.8 seconds on the timing machine. Measurements in the individual positions also didn’t stray unduly far apart from one another. 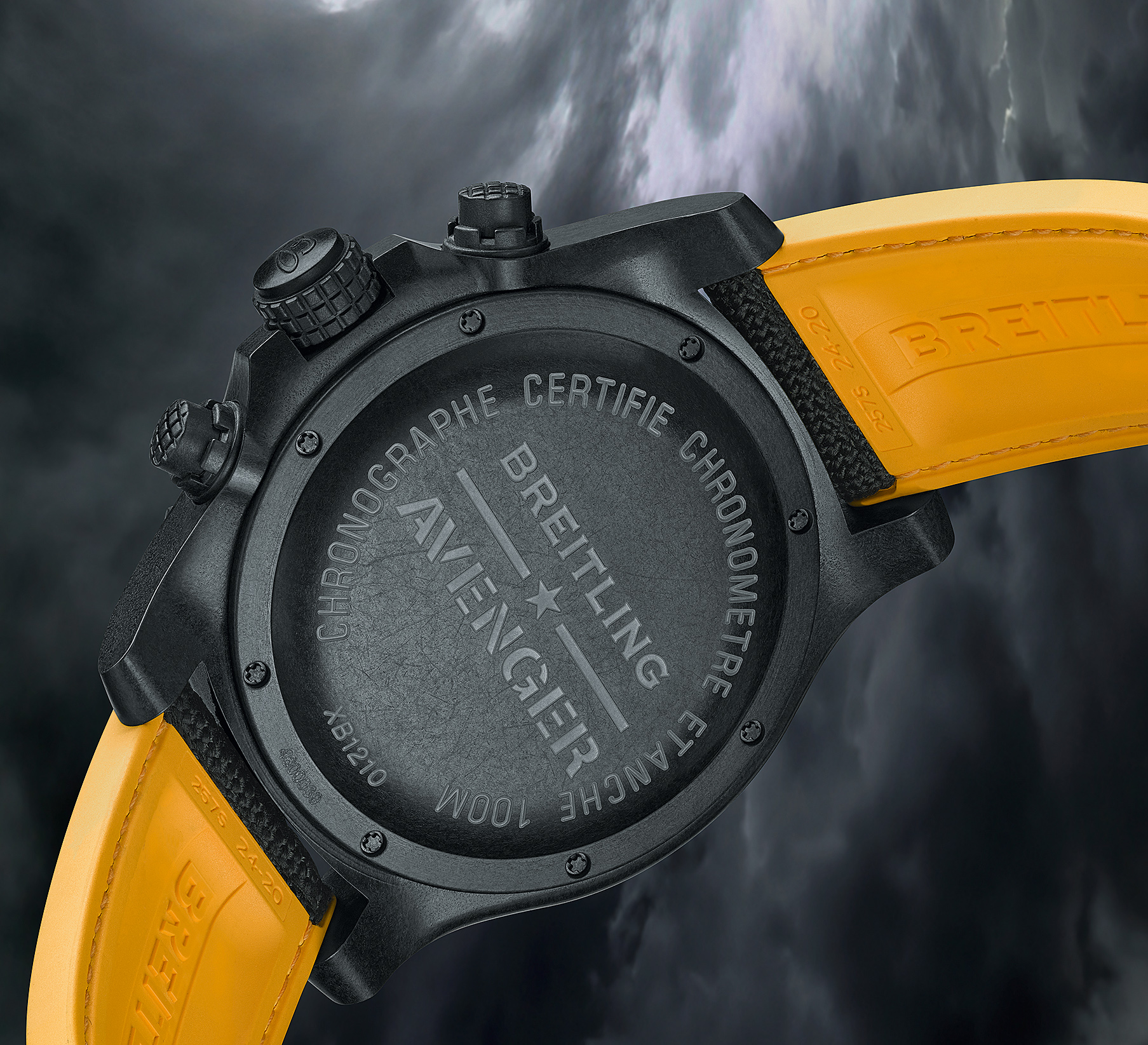 The Hurricane amasses a 70-hour power reserve, so it won’t quickly grind to a halt, even if it’s left unworn for several days. If it does run down, the time and date can be easily reset via the large, easy-to-grasp crown. The push- pieces also run smoothly, although the top one (to start the chronograph) requires a bit of extra effort.

Above all, and despite its enormously large case, the Hurricane is very comfortable to wear – even on a relatively slim wrist. The rubber strap with textile inlay clings closely around the forearm and is no less well crafted than the case and the rest of the watch. The price likewise speaks in favour of the Avenger Hurricane: surprisingly, and despite the fact that the case is made from an exclusive new material, this watch costs less than other manufacture chronographs from Breitling with black-coated cases. If you can get used to reading the 24-hour scale, then buying the Hurricane will get you a successfully designed watch that will surely stir up a tempest.