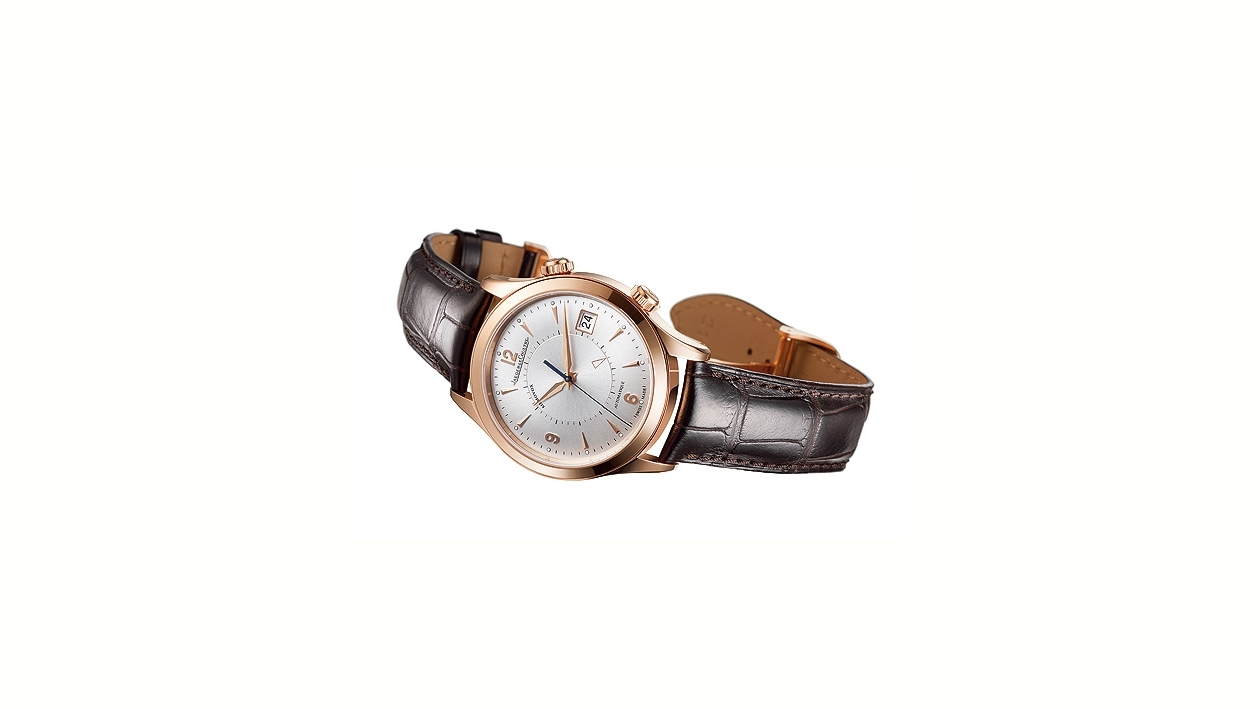 The Jaeger-LeCoultre Master Memovox was designed to keep time on the wrist and double as an alarm clock on the nightstand. In this test feature from our archives, writer Alexander Krupp sees how the modern version of the watch performs at both tasks.

If you love elegant watches, you’re sure to be drawn to the outer appearance of Jaeger-LeCoultre’s Master Memovox, which debuted in January 2010. Its immaculately made, rose-gold case harmonizes with a silver-colored dial and a dark brown alligator-skin strap, which is secured to the

"It’s really what’s inside the Master Memovox that makes it special. Under the massive caseback ticks one of the more than 1,000 mechanical calibers that Jaeger-LeCoultre has developed in the course of its 177-year history — and one of about 40 that are still in use."

wrist by a flat, double-folding clasp that accentuates the sleek classicism of the entire ensemble. The dial’s outstanding craftsmanship is evident in its brushed surface, paper-thin printed lettering and faceted hour indices. The primary contributors to the case’s impressive appearance are a stepped bezel, which four screws hold in place from below, a perfectly polished middle piece with faceted lugs and an elaborately engraved back. We couldn’t help noticing that the engravings on the caseback, which surround the raised-relief logo, are positioned irregularly so that one-third of its periphery remains clean.

It’s really what’s inside the Master Memovox that makes it special. Under the massive caseback ticks one of the more than 1,000 mechanical calibers that Jaeger-LeCoultre has developed in the course of its 177-year history — and one of about 40 that are still in use. Automatic Caliber 956 was introduced in 2008 to power the Memovox Polaris alarm wristwatch for divers. Its ancestry can be traced to hand-wound Caliber 489, developed in 1949. This movement was used inside the first Memovox, which was presented at the Basel watch fair in 1951. That watch’s special feature was its alarm, which rang significantly louder when it was lying flat on a hard surface, such as the wooden top of a bedside table, than when it was on the wearer’s wrist. This meant the watch could be used as an effective substitute for a tabletop alarm clock. Jaeger-LeCoultre has refined this useful attribute, which many other wristwatch alarms lacked, over the years, and the watch has also evolved, with the present model being the most recent. If the Master Memovox of 2010 is left lying flat against a hard surface in the evening, it will ring loudly enough the next morning to rouse even the deepest sleeper. The alarm tone is noticeably quieter if it rings when the watch is on the wrist. This means that if you want to use the watch in the office to remind you of an appointment, you needn’t worry that its chiming will bother your colleagues. Also, you won’t have to listen to the metallic rasping and tinny grating characteristic of many alarm watches. The Master Memovox doesn’t make noise: it generates mellifluous sounds. Its tone is similar to the ringing of an old-fashioned telephone, but instead of sounding in intervals, it rings continuously for 18 seconds — about the same length of time as the alarms in other well-known alarm watches. The deviation between the actual alarm time and the set alarm time also remains within the standard limit of one to two minutes. 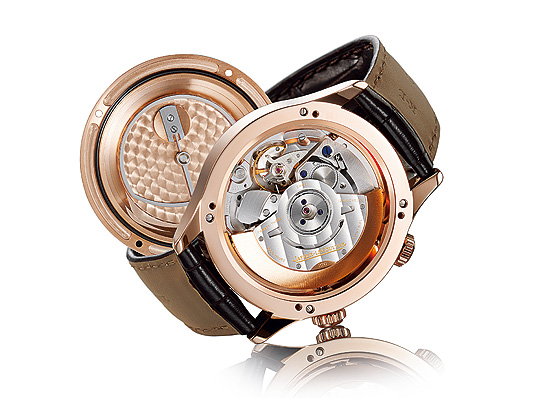 Some other alarm watches, including other models from Jaeger-LeCoultre, offer alarm mechanisms that can be set with greater accuracy. The alarms on many watches can be set in 12-minute, 10-minute, or even six- or five-minute increments, but the Master Memovox is calibrated only with quarter-hour indices. This means that the wearer has to be satisfied with setting the wake-up time to a tolerance of 7.5 minutes. This level of precision is high enough for a morning wake-up call, but if the wearer were using his watch to remind him of an appointment during the business day, he’d be advised to set the alarm to ring a few minutes early.

The alarm-time scale, which surrounds a rotatable disk in the center of the dial, does not intrude upon the dial’s harmonious appearance. On its periphery is a luminous arrowhead that can be positioned to point to the desired stroke along the alarm-time scale. The current time is always clearly discernible, and the date display, inside a window in the wreath of hour indices around the periphery of the dial, is also perfectly legible. However, to read the time in the dark, the wearer must hold the narrow strips of luminous material on the hands up to a light source shortly

" The Master Memovox doesn’t make noise: it generates mellifluous sounds. Its tone is similar to the ringing of an old-fashioned telephone, but instead of sounding in intervals, it rings continuously for 18 seconds — about the same length of time as the alarms in other well-known alarm watches."

beforehand; otherwise the luminescence is limited to the additional index dots and the alarm-time arrow.

Jaeger-LeCoultre has offered a self-winding alarm movement since 1956. Designated as Caliber 815, it was equipped with a unidirectional, hammer-type winding mechanism. The modern version uses a bidirectional rotor, but, like its predecessor, it supplies energy only to the main movement. The separate barrel to power the alarm mechanism must be manually wound using an additional crown at the 2 o’clock position. After winding, the wearer can pull this crown out and then turn it in one direction to set the alarm time or in the other direction to set the date. To avoid confusion, the crown is marked with the letter “D” (for “date”) and an arrow to indicate the correct direction of rotation. This solution is simple and very helpful: after all, a little turn in the wrong direction could set the alarm time inadvertantly or, even worse, jumble the date display, which would have to be advanced through an entire cycle until it was again correct.

The quick-adjustment mechanism for the date display clicks very exactly into place. This user-friendly feature makes up for the slow-moving date disk, which remains slanted inside its window for two hours each night. The main crown at 4 o’clock is used to manually wind the main movement and to set the hour and minute hands.

Operating the Master Memovox is very easy, but pulling out the two crowns is a bit difficult. Their grooved flanks come very close to the rim of the case, so fingernails are needed to coax each crown away from the rim. The movement is a typical Jaeger-LeCoultre creation: it’s modern, functional, cleverly designed and appealingly decorated. Among other contemporary features, we noted the balance’s frequency of four hertz, the freely swinging balance spring, and the weight screws along the balance’s rim. The bidirectional, ball-borne rotor is highly efficient. The highlight of the movement’s construction is its placement of the sounding elements: the gong wraps once around the inside of the very heavy caseback. The alarm hammer strikes a pin that extends from the middle of the back into the depths of the movement. The bearing for the winding rotor has an aperture through which the pin is inserted, ensuring that the rotor doesn’t interfere with the connection between the pin and the hammer.

The decorations on the movement, while attractive, fall short of the luxurious standards set by other Jaeger-LeCoultre movements, perhaps because they are hidden behind the massive, solid caseback — which maximizes the sound of the alarm — rather than on display in a sapphire window. The rotor features Geneva waves, gold-filled engravings and a very heavy oscillating weight made of rose gold adorned with a sunburst pattern. Blued screws contrast with Geneva waves in the bridge of the automatic winding mechanism: everything here is neatly crafted, as are the diverse patterns that are abraded onto the underlying components. However, the lower levels are merely bead-blasted and without further adornments, and the edges are neither beveled nor polished.

The Master Memovox on The Timing Machine

The degree of embellishment is sufficient for a robust caliber built for efficiency, but we were somewhat disappointed by the irregular rate results of this movement compared to those of other Jaeger-LeCoultre watches we’ve tested in the past. Our Witschi timing machine determined that the greatest deviation between two positions is a mediocre 8 seconds, and some of the individual values strayed into the minus column: the tested model lost an average of 2.3 seconds per day. This value was confirmed in our wrist test. As for wearing comfort, although the watch’s massive, gold case contributes to its hefty weight of 140 grams, it fits snugly around the wrist. You may encounter minor problems when putting it on and taking it off because the gold, double-folding clasp has a few sharp edges and does not have push-pieces to open it. However, the lack of the push-pieces contributes to the clasp’s slim, elegant look. 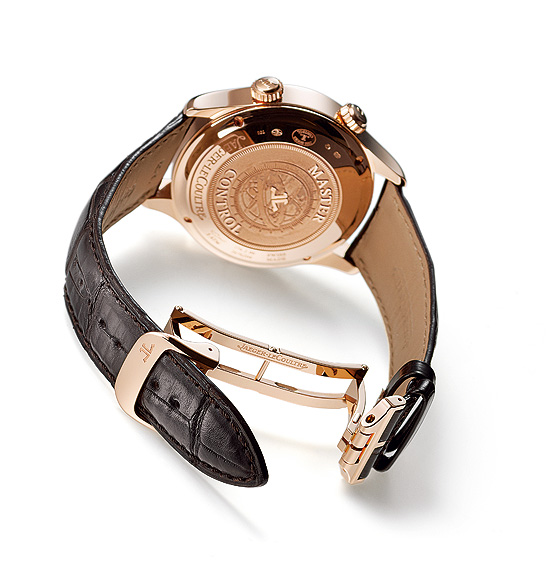 The various parts of the clasp are milled from solid gold and are, expectedly, quite sturdy, although they could have been a bit thicker at the joints so that the pins could have had a larger diameter. The pins snapped in a simulated test under the weight of a heavy book that was placed on top of the opened clasp. Of course, if the owner of this luxury watch treats it kindly, he shouldn’t encounter any problems.

Nonetheless, a pronged buckle would have been a better choice for this alarm watch. After all, it should be placed flat on a bedside table in the evening so that it can ring at full volume the next morning. It rings much more quietly if it is lying on its side, as is usual for a timepiece with a folding clasp. Not many can be expected to go to the trouble, before drifting off to sleep, of removing the clasp’s stirrup and pulling out the leather strap. Notwithstanding the relative merits of folding clasps and pronged buckles, the Master Memovox is a luxury wristwatch that should make its owner happy thanks to gorgeous design, good craftsmanship and excellent user-friendliness. And if the gold version, at $20,350*, is too expensive, there is also a steel model for $9,600*.