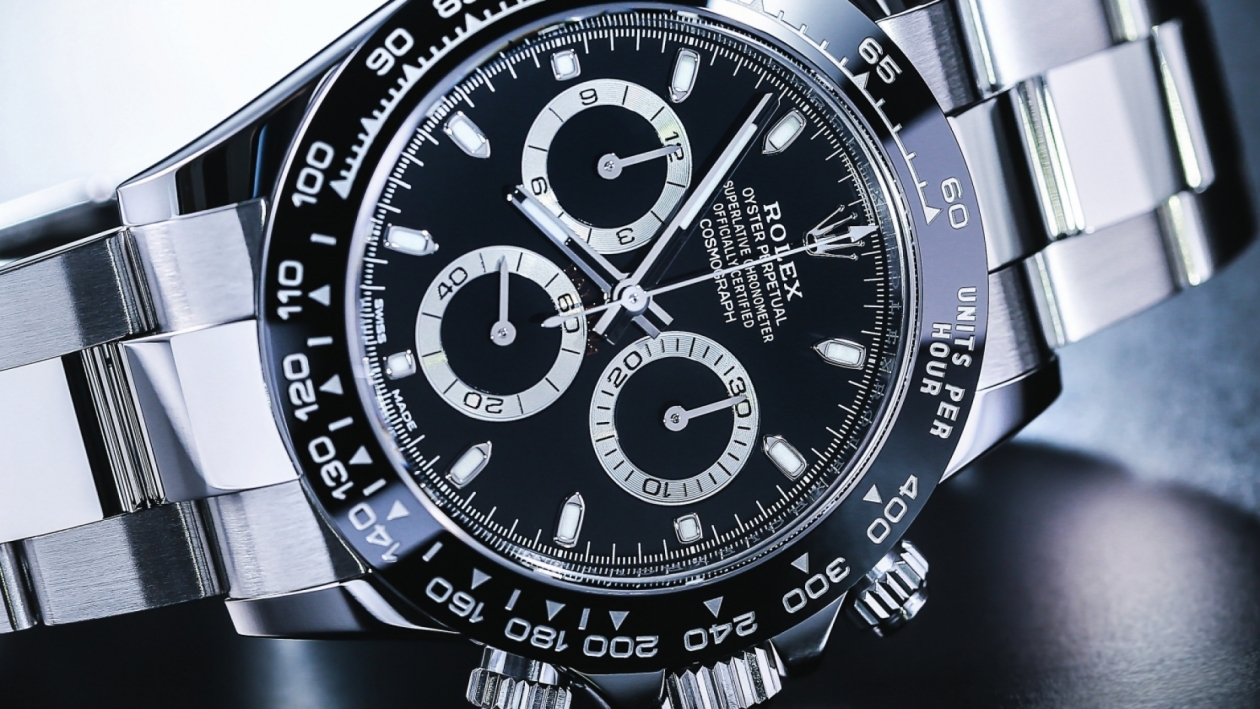 The new Daytona with a steel case and ceramic bezel is today’s most sought-after watch. We tested one of the first new models. BY JENS KOCH PHOTOS BY MARCUS KRÜGER

Waiting has long been a part of the Daytona’s tradition. In the past, those who wanted to buy the steel version would have to add their names to their jewellers’ waiting lists. And delivery delays could be as long as 10 years. Rolex deliberately produced small numbers of its steel-cased chronographs to encourage potential customers to buy the gold or bicolor ones, which are more profitable. 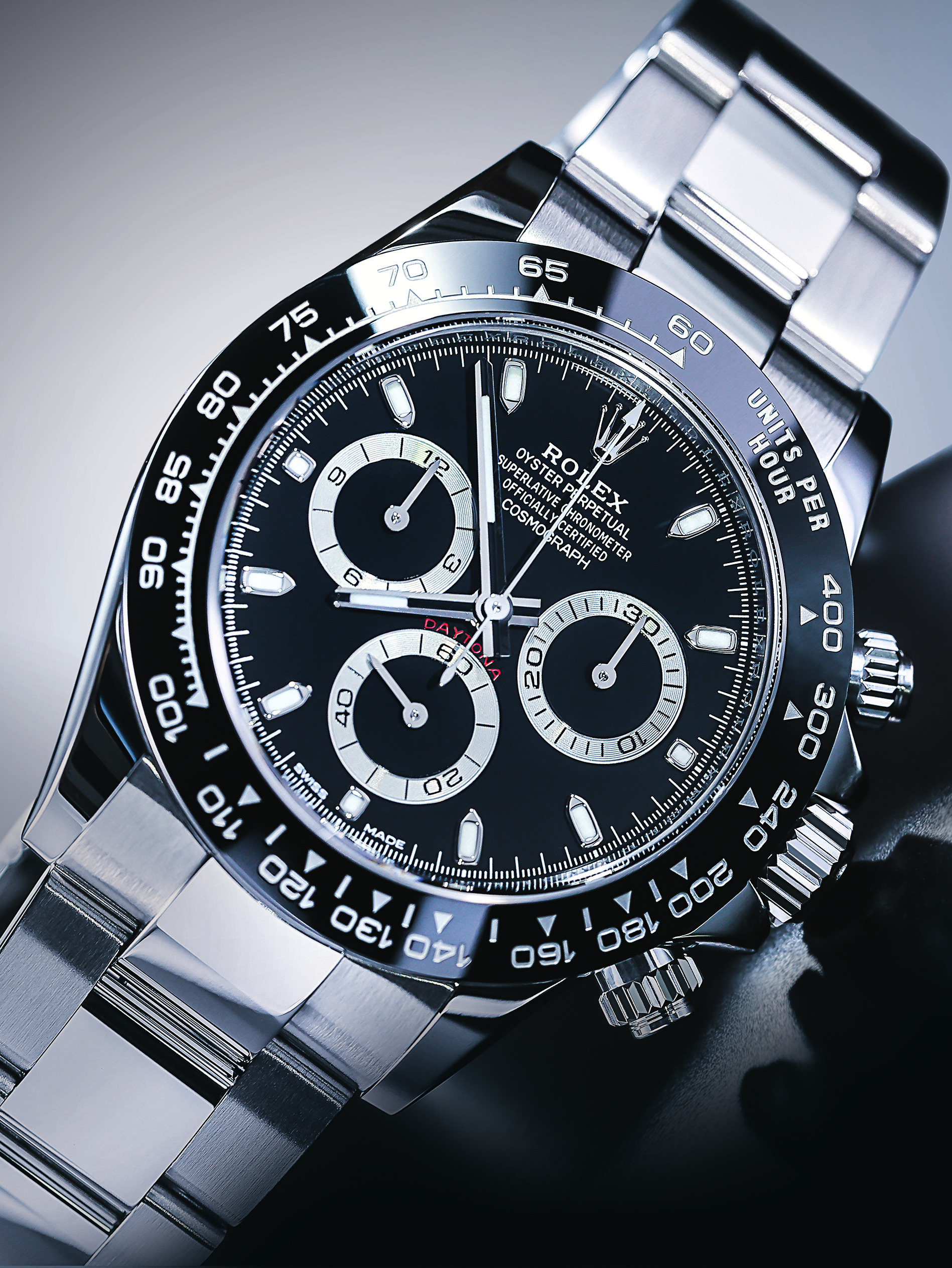 "In 2000, Rolex completed the development of its own self-winding chronograph movement, Calibre 4130. It emphasised robustness, an accurate rate and a long power reserve. In the wake of its completion, all Rolex movements are now manufactured by the brand itself."

Second-hand bicolor models actually cost less than steel ones. After many price increases, the surcharges for used steel models became smaller and so, too, did the waiting lists – until 2016, when Rolex unveiled a steel Daytona with a ceramic bezel. A ceramic bezel had long been available on rose-gold models, and the platinum Daytona made for the 50th anniversary in 2013 had one, too, so it’s not that surprising that this bezel is now on steel models. Rolex often first introduces innovations on its high-margin gold models and then waits several years before incorporating them into its steel versions. Of course, the story of the Daytona began with a steel model. The iconic chronograph with a tachymeter scale along its bezel first saw the light of day in 1963. Models with screwed push-pieces and a black Plexiglas bezel for the tachymeter scale followed in 1965 and thereafter. Automatic winding became available in 1988, when Rolex began using a modified version of Zenith’s El Primero calibre. The modifications included slowing the balance’s frequency from the original speedy pace of 36,000 vph to a more leisurely tempo of 28,800 vph. In 2000, Rolex completed the development of its own self-winding chronograph movement, Calibre 4130. It emphasised robustness, an accurate rate and a long power reserve. In the wake of its completion, all Rolex movements are now manufactured by the brand itself. The Daytona long held an exceptional position as Rolex’s only chronograph. For many years, it was the most complicated watch the brand offered. This changed in 2007, when Rolex introduced the Yacht-Master II with regatta chronograph. But this watch’s function and design were conceived exclusively for yachting, so it didn’t reach as many buyers as the Daytona, which has its roots in auto racing. When you wear the Daytona, your first impression is that it’s surprisingly elegant. Incident light reflects off the indexes, hands and polished case of this handsomely slim watch. The dial, the bezel and the flat crystal, which has no non-reflective coating, likewise gleam in bright light. But this means that there are several sources of glare, especially for the version with the black dial, which is the one we tested. Several benefits resulted from replacing the Daytona’s stainless-steel bezel with a ceramic one with a tachymeter scale. The new bezel resists scratches better and thus protects the watch from the unsightly marks left by daily use. Legibility is also improved: the scale on the polished steel bezel was often hard to read. And last, but surely not least, the new bezel is more attractive than its predecessor.

Rolex mills the tachymeter scale into the ceramic and then uses the high precision LIGA technique to inlay the recesses with platinum. The pale matte platinum inlays contrast optimally with the ceramic’s polished surface. The workmanship here is so precise that a connoisseur will enjoy scrutinising the bezel through the lens of a good loupe. The same essentially holds true for all the other parts of the watch, e.g., the case, the bracelet and the hands. But not everyone will like the fact that Rolex applies clear lacquer after having drilled the holes for the staffs of the hands, which allows indentations to form in the lacquer around the holes. The rings around the subdials are more finely satin-finished, but the design remains unchanged otherwise. And while Rolex constantly strives to optimise details, many of the improvements are nearly imperceptible. For example, the folding bar to open the clasp has been slightly modified so it no longer leaves scratch marks when the clasp is opened. The movement has also undergone relatively few changes. When manufacture Calibre 4130 was introduced in 2000, it was the first movement equipped with a Parachrom balance spring made from a niobium-zirconium alloy that Rolex had developed, patented and manufactured. Not only is this metal unaffected by magnetic fields, it’s also significantly better able to cope with shocks and impacts. Rolex unveiled an improved version of this balance spring (the Parachrom Blu) in 2005. Oxidation enhances the surface’s protection against environmental influences and also gives the spring its characteristic blue color. The blue hairspring has been hard at work inside the Daytona since approximately 2007. 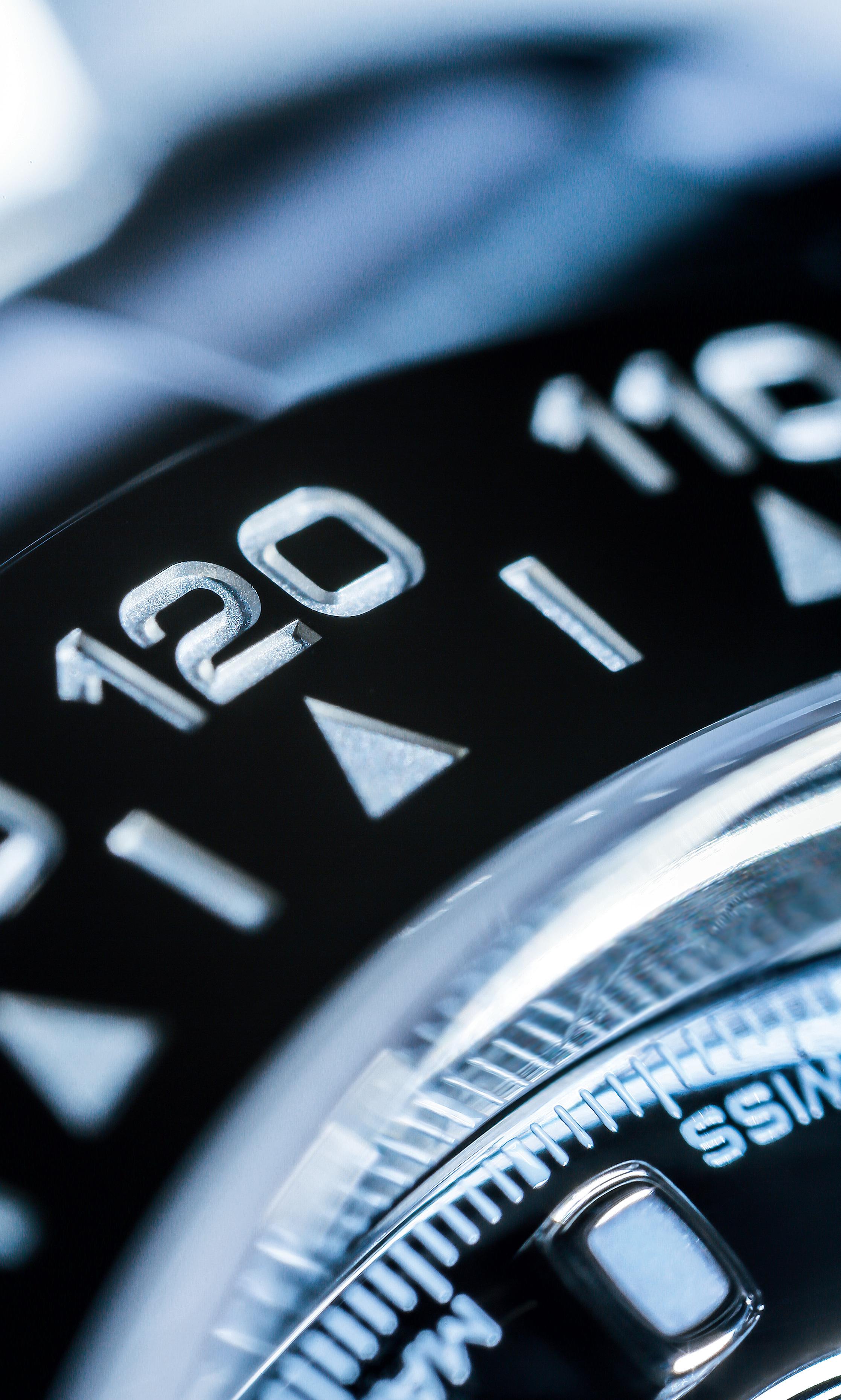 "The greatest deviation among the several positions was also low: just three seconds. The rigorous test is evidently worthwhile."

The modern vertical coupling remains unchanged and continues to guarantee a precise, shudder-free start for the chronograph’s elapsed-seconds hand. The column wheel is likewise unaltered: it helps assure that excessive force isn’t required to trigger the push-pieces. Rolex also opted not to change its characteristic balance bridge, which boosts the stability. And the power reserve lasts for a satisfyingly long 72 hours. As is also true of all other Rolex movements, this one has earned a chronometer certificate from COSC. And in 2015, Rolex introduced an additional new standard that far exceeds COSC’s chronometer requirements. This new ordeal tests the water resistance, the performance of the automatic winding system, and the power reserve of the fully assembled watch. Above all, it stipulates that the timepiece cannot gain or lose more than two seconds per day. The Daytona we tested easily achieved these values on the wrist. Depending on whether it was taken off or kept on during the night, its daily deviation was either 0.5 or 0 seconds. It also kept time with exceeding accuracy on the timing machine, where it erred by -0.2 seconds with the chronograph switched off and by 0 seconds with the chronograph switched on. The greatest deviation among the several positions was also low: just three seconds. The rigorous test is evidently worthwhile.

The Daytona ably masters Rolex’s major disciplines: the rate is highly accurate, the quality is impeccable, the timepiece is well suited for daily use, and only the slightest design changes were needed because this model had already achieved iconic status. The cost benefit ratio is likewise quite good, but this doesn’t play much of a role for a watch that prompts people to offer its wearer several thousand dollars more for it than the wearer originally paid for the privilege of owning it. Nonetheless, it’s regrettable that Rolex didn’t respond to the strong demand by increasing production. This model’s deliberately induced scarcity also attracts speculators who purchase it and then immediately resell it at a higher price. But this, of course, doesn’t detract from the watch itself. If Rolex were Apple, the brand would probably have introduced our test watch with the words, “The new Daytona is the best one we’ve ever built.” This claim would have been true, despite the few small changes made in the newest version, because the ceramic bezel does indeed make the Daytona both more resistant to scratches and more handsome. Is this new version worth your spending time on a waiting list? Our answer is yes.