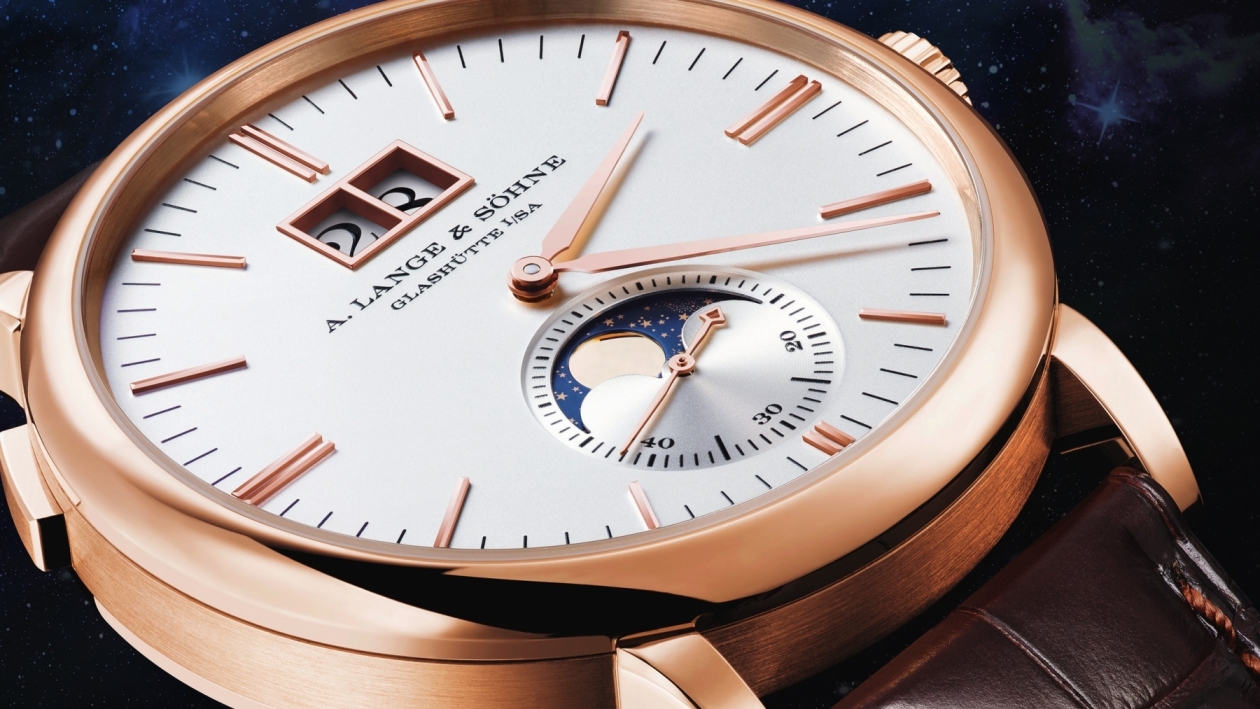 A year ago the high-end watch manufacturer A. Lange & Söhne, based in Glashütte, Germany, brought out a Saxonia model that combines an outsize date with an extremely precise moon-phase display. We put this new Saxonia through its paces. The big date, of course, has been a hallmark of the brand ever since the newly re-established A. Lange & Söhne company launched its fi rst watches in 1994. The ultra-precise moon-phase display also has a long history with the brand: the movement in this watch, the self-winding Calibre L086.5, is Lange’s 16th movement with this feature. Just how precise is the moon-phase? It will be off by one day in 122.6 years (assuming, of course, that the watch is kept running continuously for that time). The display is connected to the hour wheel and is always in motion. Thanks to the precisely calculated seven-step gear train, the period between one new moon and the next is 99.998 percent accurate. If you do allow the watch to stop running, you can adjust the moon-phase display by pushing the button set into the case at 4 o’clock. The moon disk is made of gold and decorated with 852 laser-cut stars. The disk’s intense, deep-blue colour is created using a special patented coating process. The moon-phase display shares its subdial with the seconds indicator. Calibre L086.5 is based on the L086.1, which was introduced in 2011. The new calibre is 5.2 mm thick, just 1.5 mm thicker than the base calibre, despite the addition of the calendar and moon-phase. The movement has a 72-hour power reserve, supplied by a single barrel. 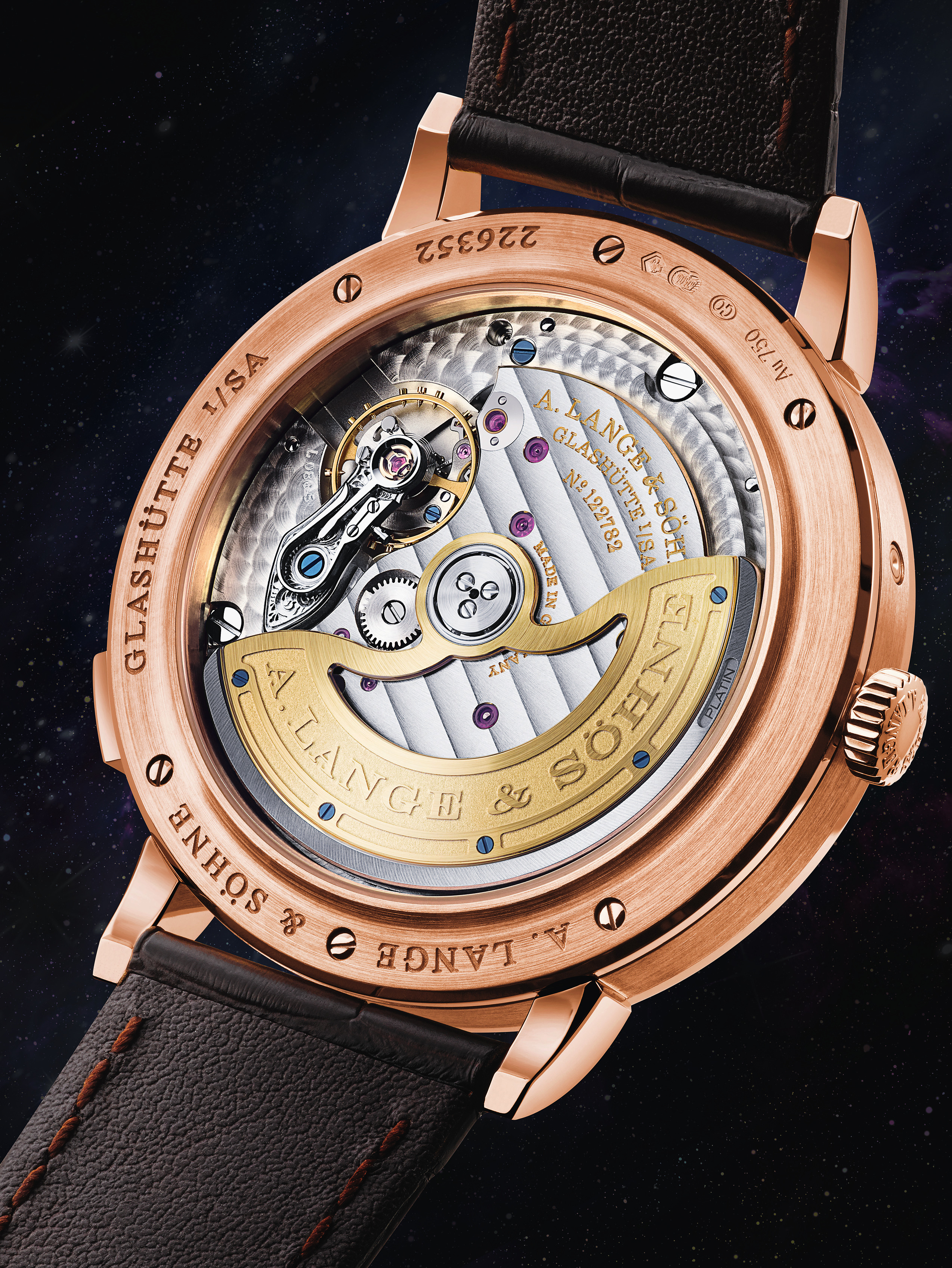 Like the moon-phase display, the movement itself is extremely precise. When we put the watch on the timing machine, the deviation was less than 0.5 seconds per day. On the wrist, the watch deviated by just one second per day. Lange follows very strict standards

"Everyone talks about greater rate accuracy [as depending on] only the balance and balance spring and less about the power source. But that’s precisely what’s so important for stable amplitudes and the kind of rate we’re looking for." Anthony de Haas Head of Product Development, Lange

when it adjusts its movements. They must lose no more than two seconds a day and gain no more than three seconds. These tolerances are twice as tight as those required for COSC certifi cation. For watches with long power reserves, Lange’s standards allow an additional full second of deviation after 50 to 60 hours. The watch met this standard as well. Also quite striking was the balance’s stable amplitude as the tension in the mainspring decreased. Anthony de Haas, head of product development at Lange, says this is due not just to the quality of the balance spring but also to the spatial relationships within the barrel. “Everyone talks about greater rate accuracy [as depending on] only the balance and balance spring and less about the power source. But that’s precisely what’s so important for stable amplitudes and the kind of rate we’re looking for.” The watch’s balance spring is manufactured in house and works in conjunction with a screw balance. The balance’s frequency is 21,600 vph (3 Hz). The lateral screw on the swan’s-neck regulator, a common feature of watches made in Glashütte, is used to adjust the rate. A look through the transparent sapphire caseback reveals other details associated with Glashütte watchmaking: a hand-engraved balance bridge, three-quarter plate made of untreated German silver, and blued screws. The winding rotor has a platinum weight on its outer edge to provide more winding effi ciency. 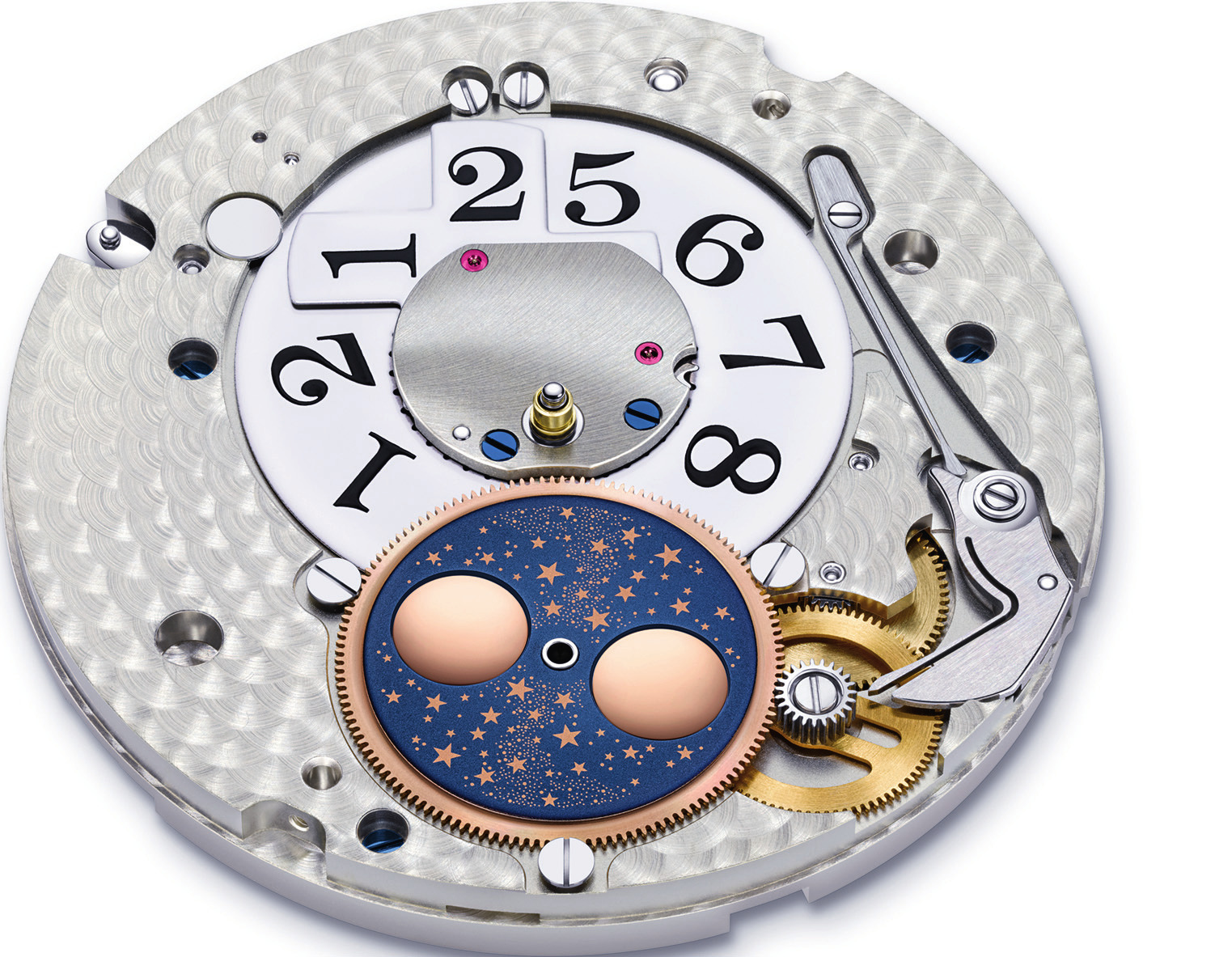 The big-date display can be corrected using the large rectangular pusher at 10 o’clock. When the watch is running, the “ones” digit advances slowly, visible about 15 minutes before and 25 minutes after midnight, before it jumps ahead to its next position. If the “10s” digit is advancing at the same time, it will move in sync with the “ones” disk. This display tends to have a rather chaotic look for a few minutes. The date is located prominently on the dial, directly below the 12 o’clock marker. The display is framed by a gold double window with a center bar. The moon-phase/small seconds display is eye-catching, not just because of the moon and stars but also thanks to the Arabic numerals at 20, 30 and 40 seconds. Lange has recently made some changes to the Saxonia’s dial. The gold baton-shaped markers now extend to the edge of the dial rather than ending with a dot as before. The minute- track markers are also longer, for a more modern look.