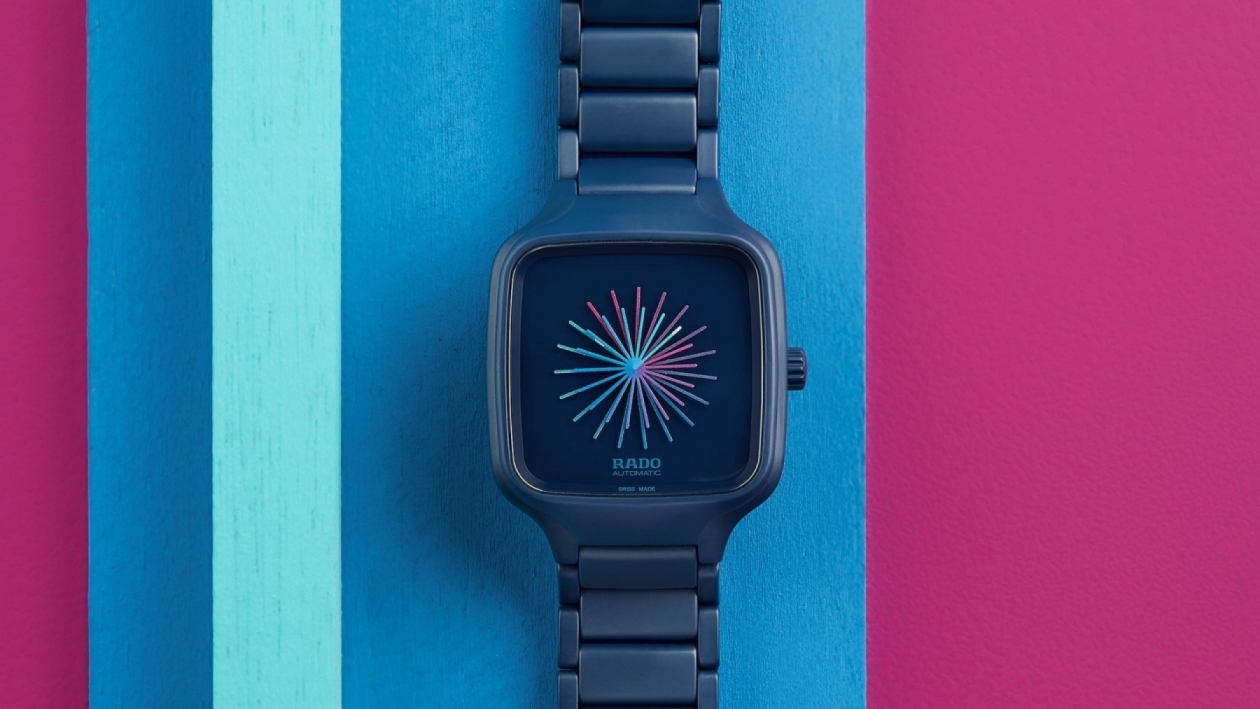 Announced in 2019, Thukral & Tagra’s True Square ‘Over the Abyss’ is the fourth in a series of Rado’s collaboration with artists and designers the world over.

A canvas may typically be made of fabric but contemporary Indian artists Jiten Thukral and Sumir Tagra’s latest work is set on a watch’s dial. Part of Swiss watchmaker Rado’s collaboration with artists and designers world over is the timepiece True Square Over the Abyss, whose dial features the Indian artists’ work. 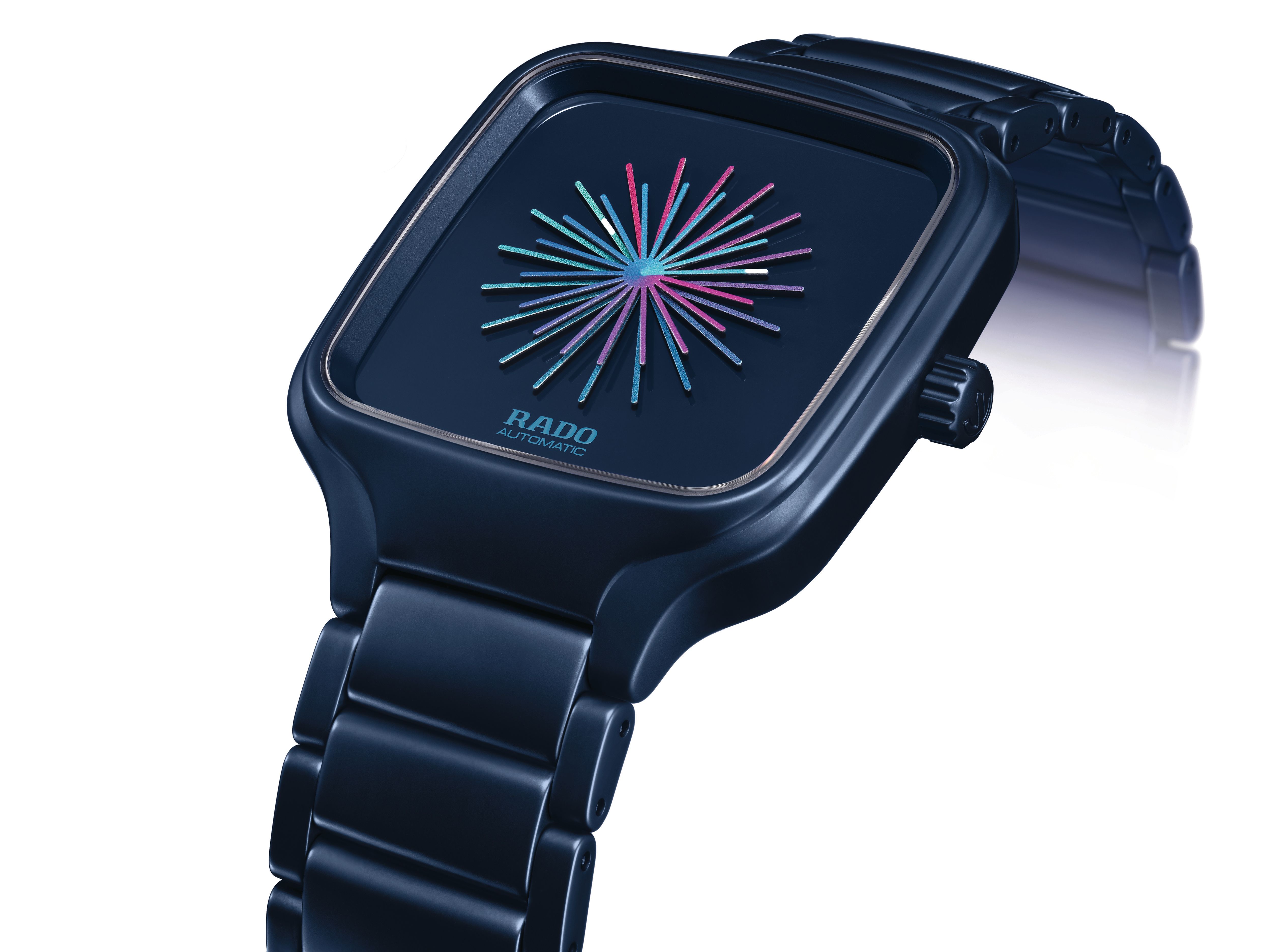 The watch in itself is one of Rado’s most recognised designs –the True Square is the world's first square watch featuring an injection-moulded high-tech ceramic case. The new launch is a matte blue piece, on whose blue lacquer dial Thukral and Tagra have created 37 ‘rays’, representing 37 world timezones, emanating from the centre, and with a colour gradation that starts from blue and ends in pink -- the timezones are also represented as 19 minute hands and 18 hour hands. The local time is superimposed on these 37 hands, readable via two strong SuperLuminovas that rest at the end of the hour and minutes hands. The unisex watch is a 38mm x 44mm (W x L), featuring a Rado Calibre R763 that has 80 hours power reserve.

A sunburst, a beating heart, fireworks, or a snowflake – interpret it any way you want, but for the artists the idea of different timezones finds roots in social design, which the duo have practiced for a long time now. Simply put, social design focuses on how individuals are connected with each other, a concept which became more poignant in light of the lockdowns and isolations that people experienced this past year. “The name ‘Over the Abyss’ is reflective of the time we created the design in, in 2020. It points to isolation yet connectivity, an uncertain future. When we came up with the idea, Rado too felt that given everything that was going on, the concept was a value-add to the design,” says Sumir Tagra. 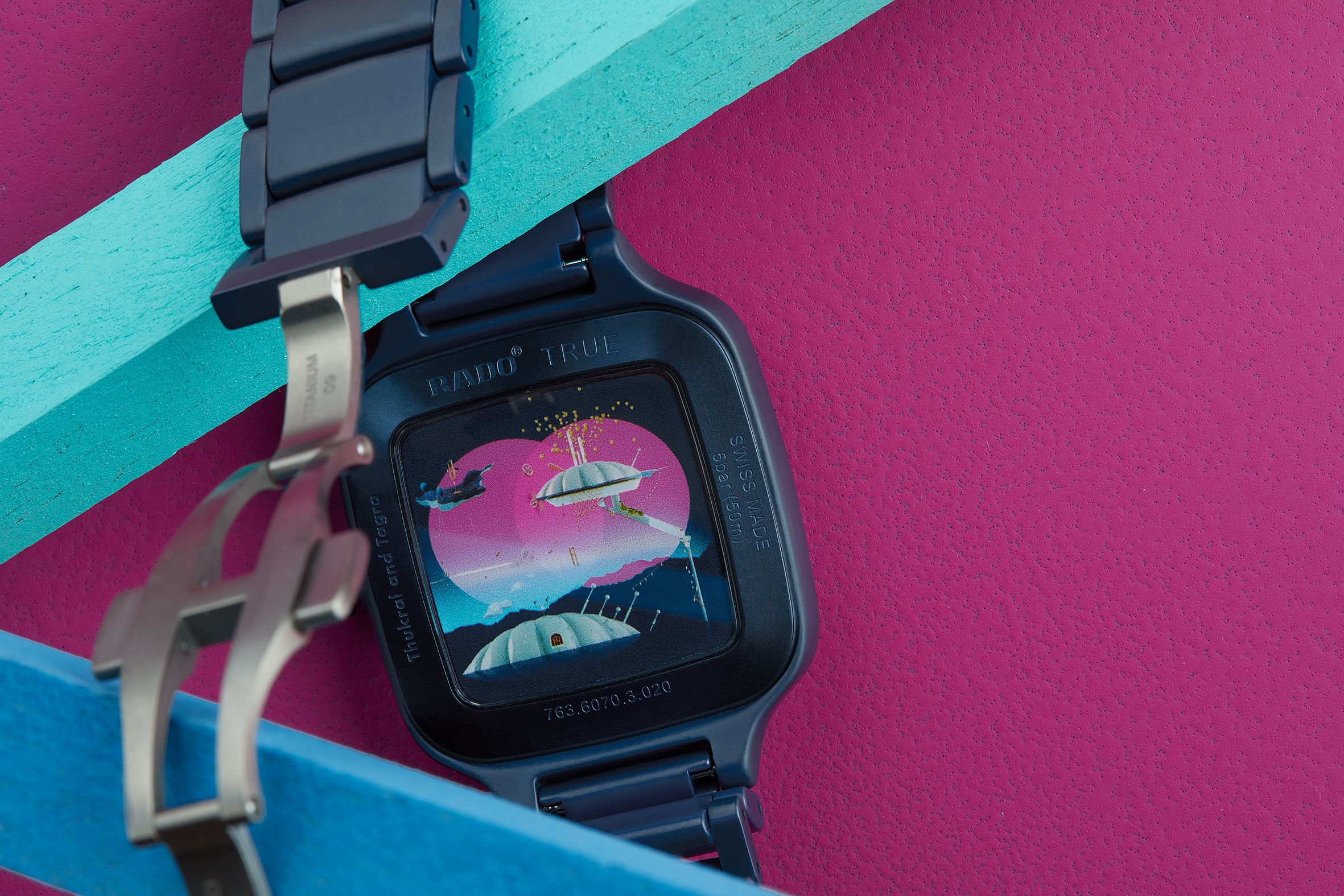 Thukral and Tagra are one of India's leading contemporary artists, and their work spans paintings, sculpture, installations, interactive games, video, and design. In the lead-up to the creation of the design, Thukral and Tagra visited the Rado manufactory in Switzerland, and given and given the collaborative nature of their work, the association with the Rado team was an extension of that. There was constant experimentation, and the duo was blown away by the futuristic lab and Rado’s prowess with material innovation. A result of that is directly visible in the watch whose case is a matte blue, high-tech ceramic monobloc construction, with a matte blue high-tech ceramic crown. “We were very interested in keeping the watch matte. We wanted to push and see how matte we could make the timepiece.”

It’s not just the front of the watch that has an artwork by the duo – the titanium caseback features a digital print of a previously created drawing by them, called Dominus Aeries, which explores visions from the future with references from the past. It blends in with the overall concept seamlessly. “It has an emotional connect there that we wanted to keep in the watch,” explains Jiten. 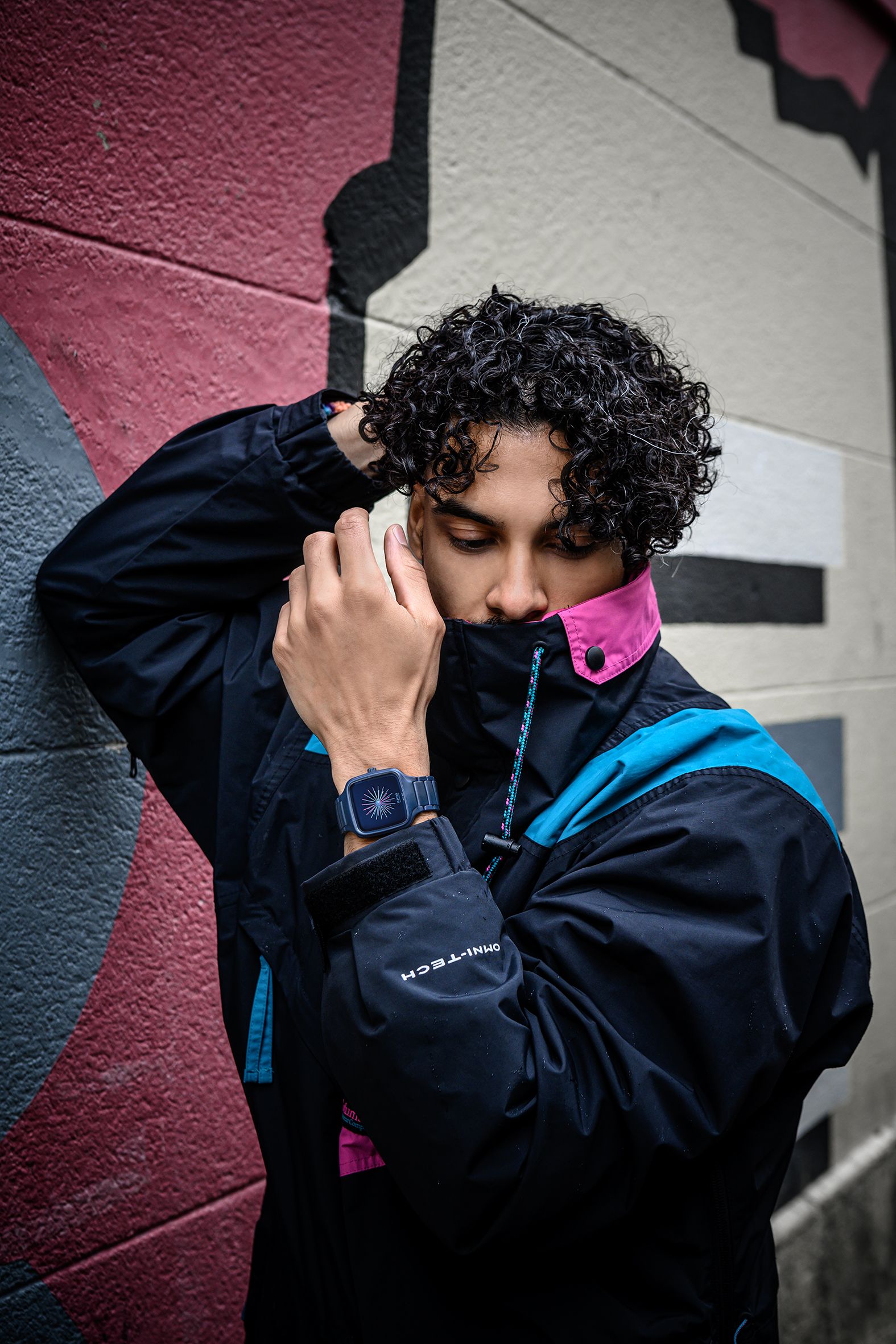 Rado has a deep connection with design, and has in the past associated with British product and furniture designer Jasper Morisson, and more recently French-Austrian designer Marina Hoermanseder in the Rado Captain Cook collection. Over the Abyss is the fourth in line in a series of collaborations that were explored by Rado with designers the world over. The first one, called the True Square Undigital, created in collaboration with Tokyo-based design studio YOY, was a high tech ceramic and titanium watch that juxtaposed a digital aesthetic with the analogue. This was followed by collaboration with the Italian-Dutch Studio Formafontasma, whose light grey True Square Formafontasma was an ode to ‘closed time’; the small aperture on the dial drew inspiration from pocketwatches. In late 2020 was unveiled the futuristic True Square Tej Chauhan -- named eponymously after its British industrial designer creator -- a striking mustard yellow piece with a padded leather strap.

Thukral and Tagra, fimilar with all the designs that came before theirs, say that it has been a one-of-a-kind opportunity. “We like all the pieces. And it is interesting the way all the designs have come to life.”