Coke or Pepsi? It’s a matter of taste, some say, and individual tastes always differ. But there’s only one right answer if you’re talking about the Rolex GMT-Master. Although the manufacturer made a version that had a GMT bezel in red and black, called “Coke,” the first GMT-Master from 1955 bore the red-and-blue scale for the 24-hour display and was nicknamed “Pepsi.” This year’s new Pepsi GMT-Master II represents the reincarnation of the classic in its original form.

At first, the colours were used to distinguish between the day and night times of the second time zone. This and other specs for the watch came from Pan American Airways, at whose request this model was created. At the time, new jet airliners made intercontinental flights shorter and more popular. And the increased number of flights also increased the demand for watches with a second time zone. In addition to having the aura of a pilots’ watch, the high level of recognition of the coloured bezel contributed to the GMT-Master’s popularity. 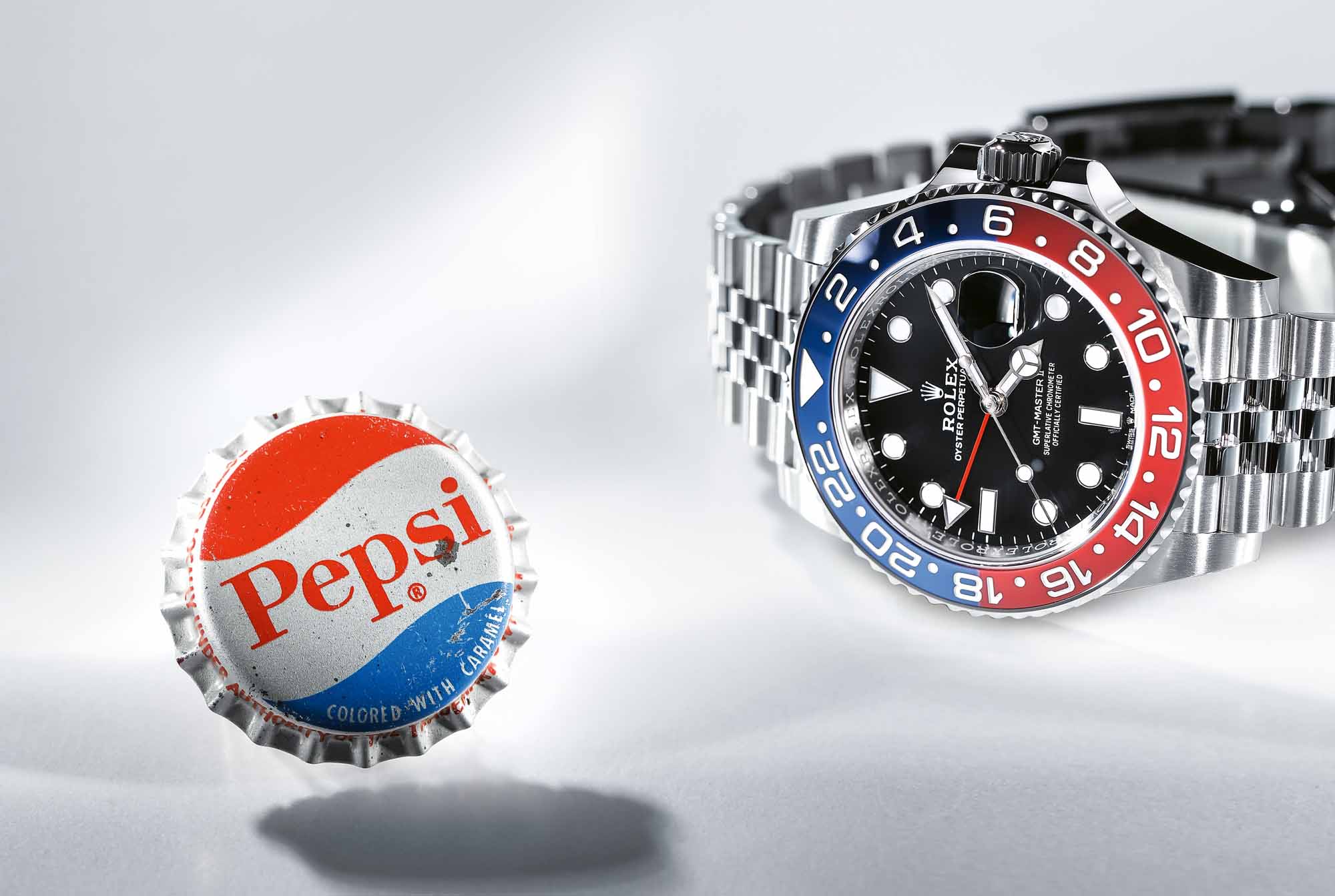 Rolex modified the Pepsi very cautiously until 2007. But then, when it introduced a ceramic bezel on steel versions of the GMT-Master II, it became necessary to shelve the Pepsi. At that time, a two-colour bezel made

"Functionally, Rolex offers more than most other manufacturers – from the bracelet extension to the time-zone-adjustment function, plus the highest levels of accuracy, legibility and wearing comfort."

of ceramic appeared to be technically impossible, and the colour red could not be created satisfactorily in this high-tech material. In 2013, Rolex solved one of these problems and the first two-tone ceramic scale appeared – in blue and black. This very popular GMT-Master II in steel became known as “Batman.” In 2014, Rolex was able to create the desired red colour, and the company reintroduced the beloved red-and-blue Pepsi bezel – on a white-gold watch. The price of over $40,000 was too high for many fans of steel Rolex sports watches. In 2018, Rolex responded to its customers’ desires and again issued the Pepsi in steel.

So as not to be confused with the more expensive white-gold Pepsi, the steel Pepsi is the first Rolex sports watch that has a five-piece-link Jubilee bracelet, previously reserved for Datejust models. But whether this is a consolation to owners of the white-gold version is debatable, since the multi-linked Jubilee bracelet has a more elegant appearance than the three-row Oyster one. 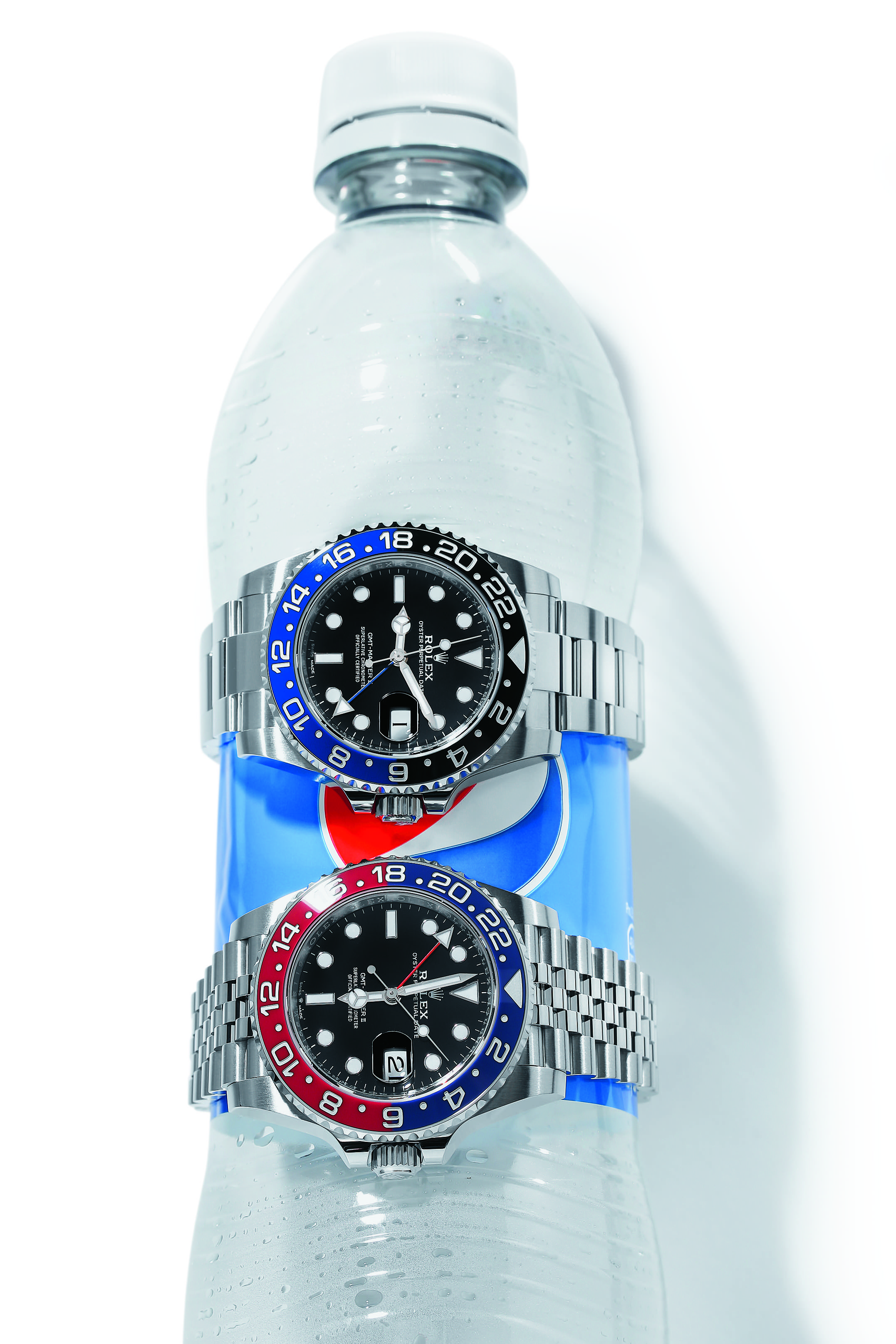 Rolex developed the Jubilee bracelet in 1945 for the Datejust, and the GMT-Master has been available with this bracelet option since 1959. Like the Oyster bracelet on the earlier GMT-Master II, the center links are polished while the outer links have a brushed finish.

We found the Jubilee bracelet to be very comfortable to wear. The small links fit snugly against the wrist and did not pull fine hairs. Thanks to its curved links, the Oyster bracelet felt just as supple and comfortable. The bracelet and case are both made of saltwater-resistant stainless steel 904L, which Rolex calls “Oystersteel.”

Unlike the Datejust, the Jubilee bracelet for the GMT-Master II does not have the Oysterclasp folding clasp but instead uses the Oysterlock folding clasp (which is usual for sports models, with an additional safety bar). The clasps look very similar. Both offer the Easylink extension piece that can lengthen the bracelet by 5 mm – practical when the wrist expands due to warmer temperatures or increased activity. Half a link can be folded out from the clasp to make the bracelet longer without making a visible difference to the bracelet. 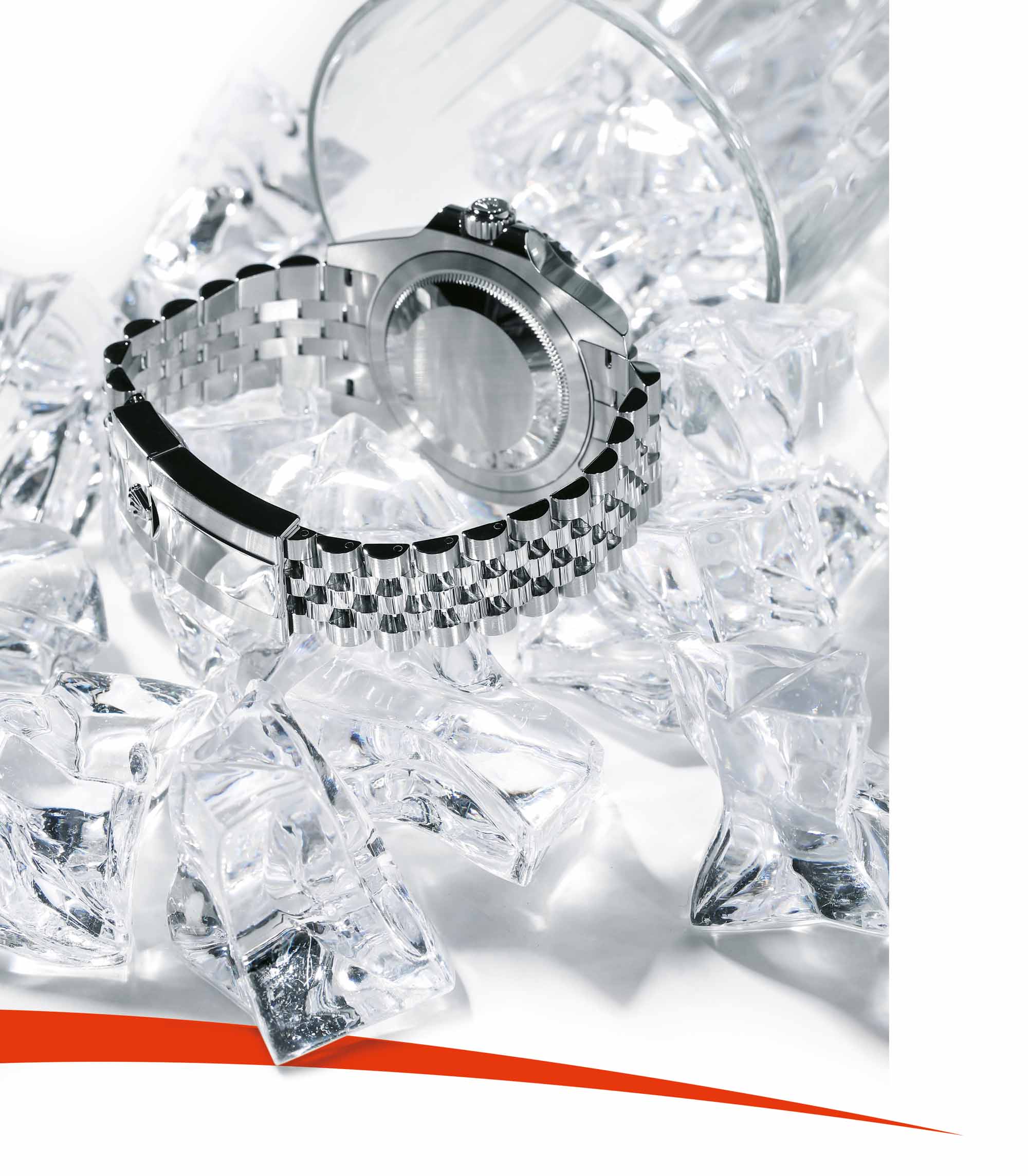 The high-quality clasp on the Jubilee bracelet comes very close to optimum, in terms of workmanship and operation. The safety folding bar is barely noticeable when closed. Opening it by lifting the Rolex crown reveals a lever that is easy to raise to open the bracelet.

The winding crown is also simple to use. It must be unscrewed to wind the watch. In the first pulled-out

"In order to make the numerals permanently easy to read, the entire ring is coated with platinum in a PVD process and then polished so that the precious metal remains only in the recessed numerals and dots. Rolex has patented both processes. "

position, the primary hour hand can be moved forward or back in hour increments to set a second time zone. The date will advance accordingly in either direction. In the second position, the minutes hand can be adjusted (and with it, the 24-hour and primary hour hand). The 24-hour hand is best used for home time or, for pilots, the all-important GMT, with the hour hand showing local time. The GMT-Master II is known for this function for travellers. Many other manufacturers only offer a quick-adjustment function for their second-time-zone watches, which is less useful when traveling.

With the GMT-Master II, it is also possible to adjust the bezel (which ratchets in hour increments) temporarily to show another time zone – for example, if you are in the U.S. and are working with a German company. Turning the bezel so that the GMT hand shows the time in the desired time zone allows you to see immediately whether your business partners might be available or not. All in all, the GMT-Master II provides very practical time-zone functions.

Upon its launch in 1955, the Pepsi’s bezel was made of Plexiglas and the red-and-blue colour and the white track were printed on the underside. From 1959 to 2007, Rolex produced the bezel in aluminium with colours created using an anodising process. This was followed by a zirconium-oxide ceramic track (and the related problems with the colour). Mineral pigments can be added to colour the material, but there is no mineral pigment that can produce a saturated red colour. After years of research, Rolex returned to ceramic with an aluminium-oxide basis and added chromium oxide, magnesium oxide, and a rare earth oxide. This resulted in the red ceramic bezel we have today. For the blue colour, half of the bezel is impregnated with a metallic salt solution prior to the sintering process. You can see the blue layer on top of the red background using a loupe. Sintering at 1,600 degrees Celsius for more than 24 hours results in the final colours. However, because the scale shrinks slightly during this process, it must be milled into the proper shape.

In order to make the numerals permanently easy to read, the entire ring is coated with platinum in a PVD process and then polished so that the precious metal remains only in the recessed numerals and dots. Rolex has patented both processes. The faded colours often seen on older GMT-Master models will not occur with the new UV-resistant bezel. 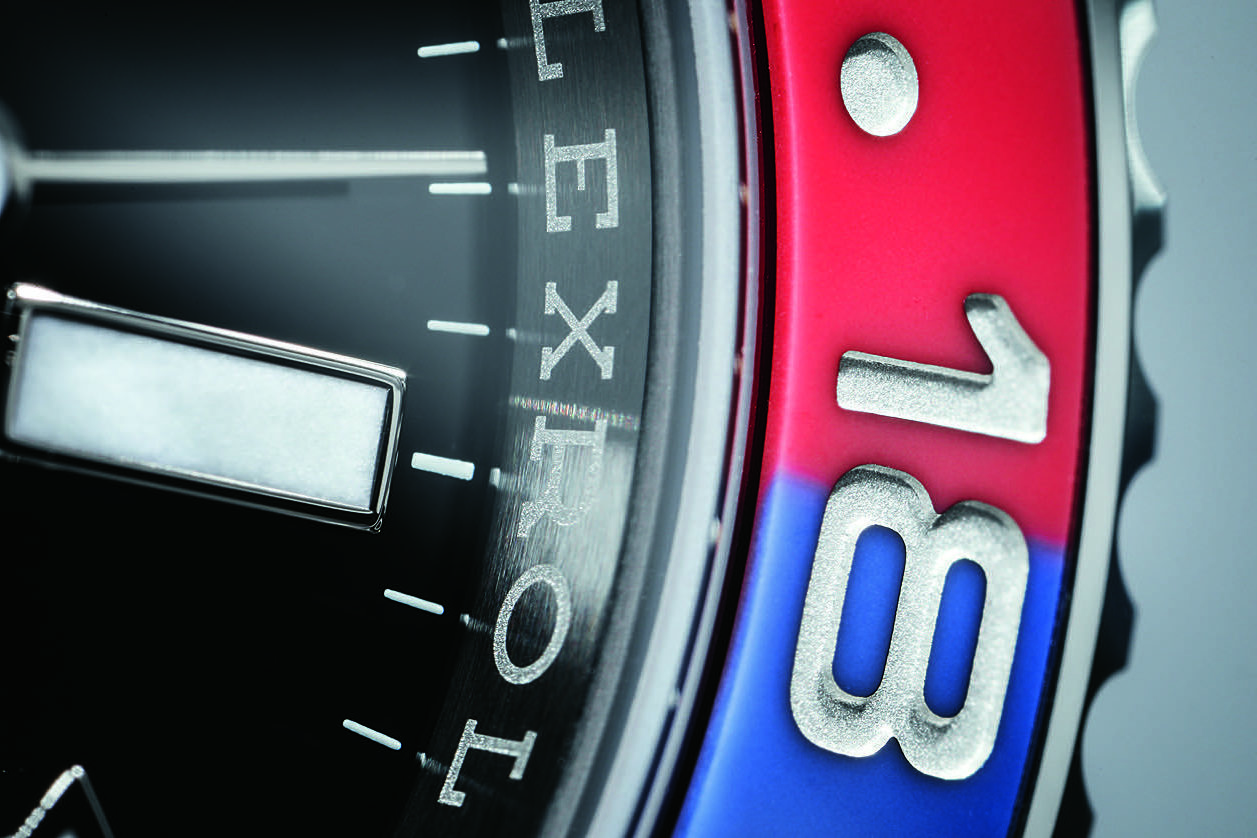 And in contrast to the white-gold Pepsi and all previous GMT-Master II models, this version is the first to use the new Caliber 3285. With the exception of the chronographs, all Rolex self-winding watches are powered by the 31xx caliber (the old version) or the new 32xx caliber with a 70-hour power reserve instead of 48 hours. Although Caliber 3186 continues to be used in the other GMT-Master II models (except for the two new models in red Everose gold and in steel and Everose gold), the new movement now has a ball bearing instead of a plain bearing for the oscillating weight. The in-house Paraflex shock absorber is designed to slide back into its original position more smoothly in the event of an impact.

The greatest advantage for the wearer of the new Pepsi is the increased power reserve. Instead of two days, the watch provides almost three full days of uninterrupted power. The main contributor to the enhanced power reserve is the more efficient Chronergy escapement. The geometry of the pallet fork and escape wheel has been optimized, and the LIGA process, in which these parts are formed with a galvanic moulding process, has allowed Rolex to produce perforated and thus lighter components. And thanks to the nickel-phosphorous alloy used, the escapement is no longer affected by magnetic fields. 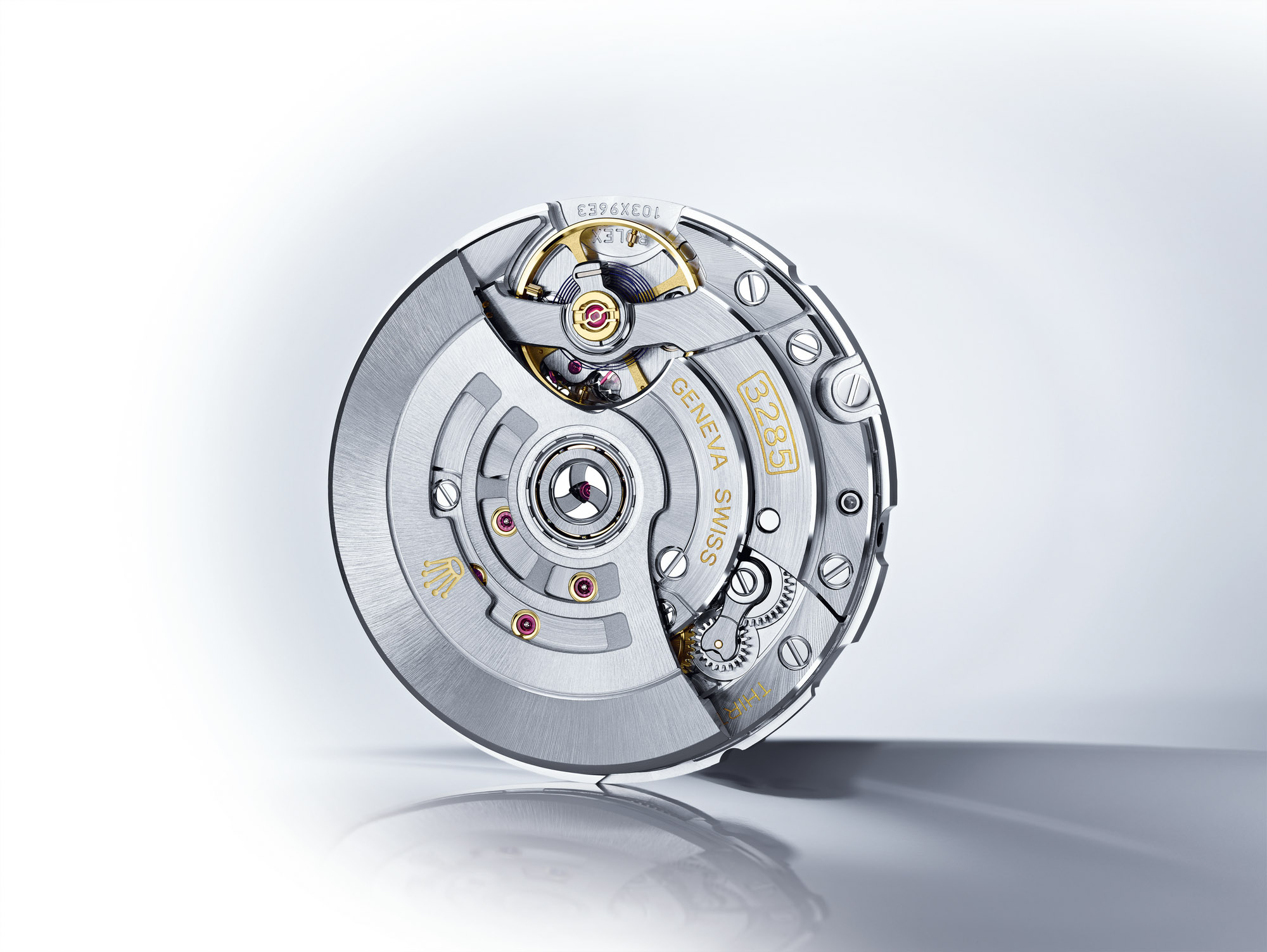 What has remained are the well-known advantages of Rolex movements: an extremely stable balance bridge instead of a single-sided balance cock, the free-sprung hairspring with Breguet overcoil and the adjustable fine regulator with Microstella weights on the balance.

Rolex has improved the caliber consistently in the core virtues of accuracy, longevity, and sturdiness. Decorations are present, like a sunburst finish, but there is no hand-applied engraving. The new movement

can also be identified by a detail on the dial: a tiny Rolex crown is placed between the two words “Swiss Made” at the dial’s edge.

As always with Rolex, the official Swiss chronometer certification institute COSC confirms the movement’s high rate accuracy at various temperatures and positions. And Rolex’s own specifications require an even greater degree of regulation, with an average deviation of between -2 and +2 seconds per day. Our test watch met these high expectations on the timing machine and showed an average deviation of only +1 seconds. The rate remained in the range between 0 and +3 seconds in all six positions; accordingly, the greatest positional error was measured at only +3 seconds with a manageable amplitude drop between the horizontal and vertical positions.

At $9,250, the steel GMT-Master II Pepsi is placed in the mid-level price range. There are more economical manufacture alternatives with a second time zone, as well as more expensive ones, but with regard to value retention, hardly anyone can compete with Rolex. Since June 2018, this new timepiece has been delivered in very limited numbers, and the few pieces that are resold through online auctions cost at least two times more than new. Demand exceeds supply to a huge degree. As the number of delivered watches rises, the prices for pre-owned watches are expected to fall somewhat, and we expect that the prices will more or less follow the trends of the GMT-Master II Batman, which is being sold at about 10 percent more than the new price, even with signs of wear. However, in the next few years, it will be difficult to buy a Pepsi from a licensed dealer since the waiting lists are already full. 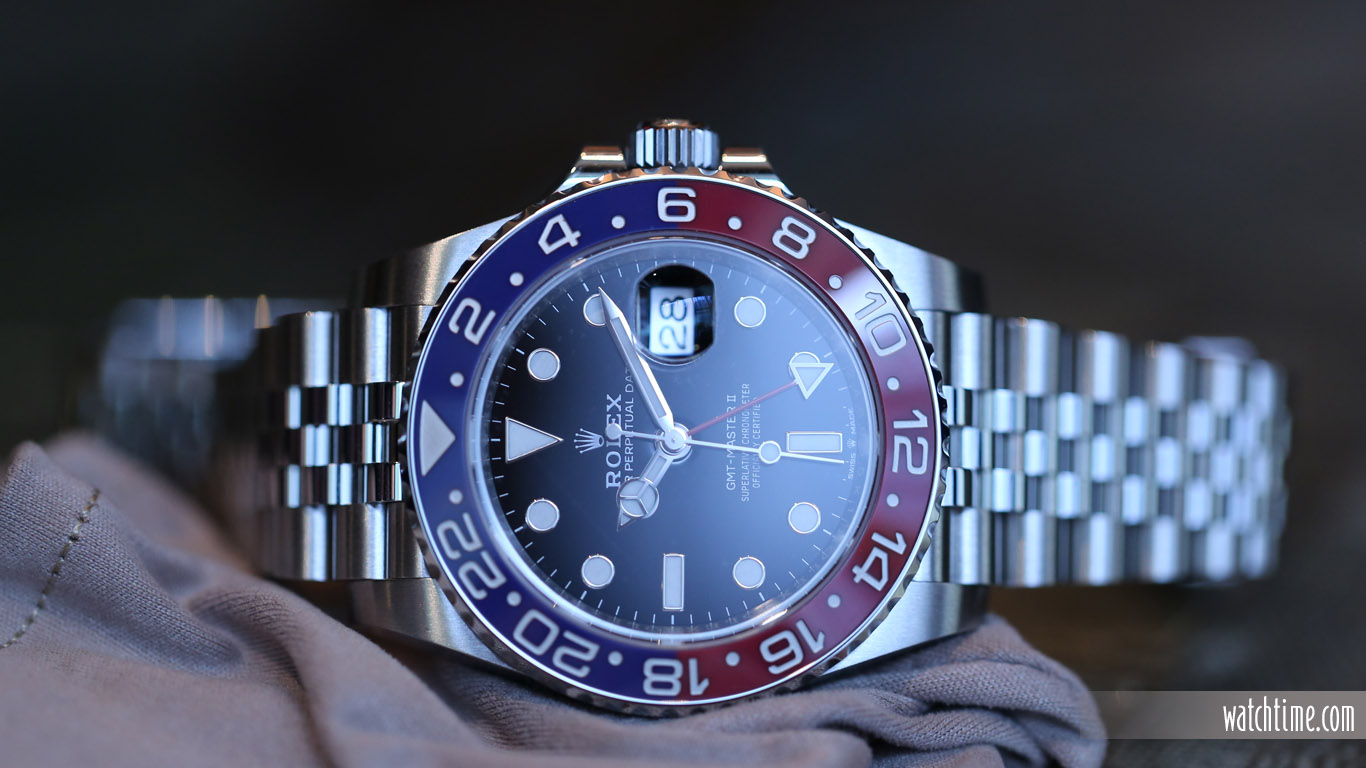 Rolex has hit the bullseye with its new reissue of the blue-and-red GMT-Master II in steel. While the design has changed very little over the last 60 years, the watch has become a classic with a timeless look rather than merely vintage. The Jubilee bracelet is a good fit with the watch. Rolex has improved the technology within and provides even greater value with a longer power reserve. Functionally, Rolex offers more than most other manufacturers – from the bracelet extension to the time-zone-adjustment function, plus the highest levels of accuracy, legibility and wearing comfort. A transparent caseback would be a welcome addition. And it would be great if Rolex could deliver orders to everyone who says, “I’ll have a Pepsi, please!”