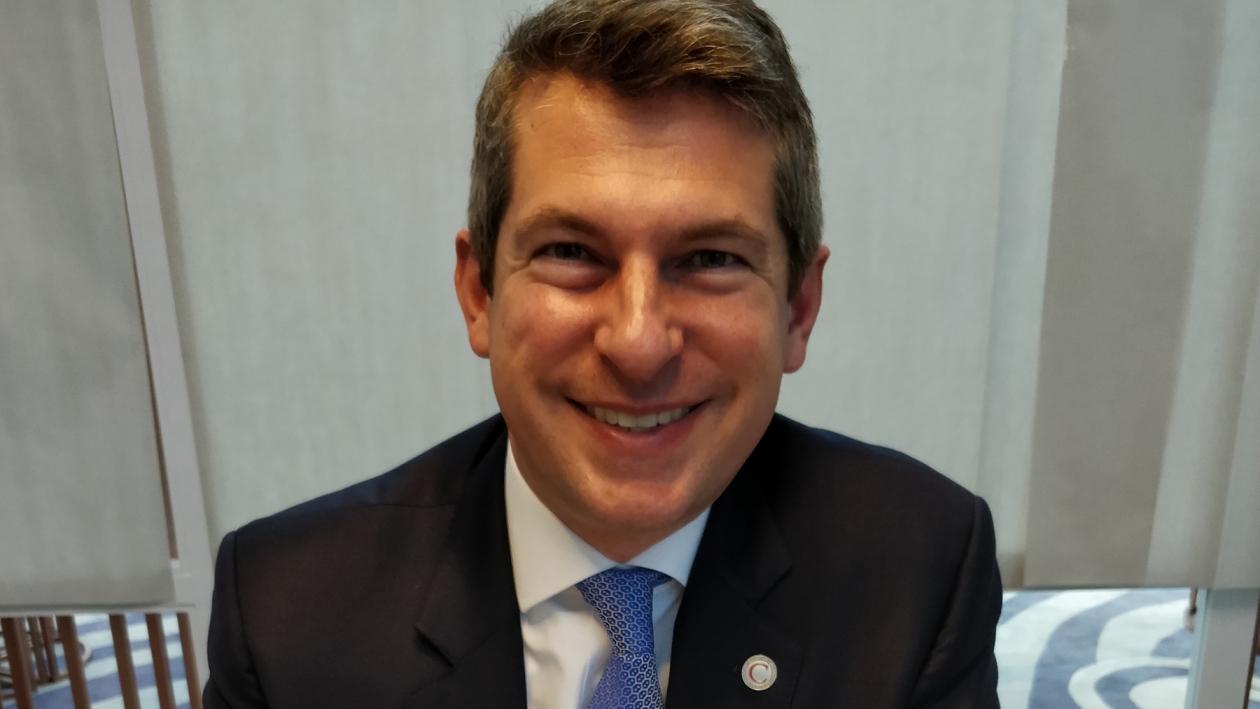 We sit down with the International Head of Watches, Christie's, John Reardon to discuss passion, auctions and watches.

A thorough family-man and a passionate person at heart, John Reardon is truly one of the few personalities who's never worked a day in his life. The passion for watches is so deeply inscribed in him that work doesn't feel like work. When he's not learning about the industry, he's spending time with his family, or going for marathons. In fact, he recently finished his first marathon in New York wearing his Patek Philippe Aquanaut – the first Patek he bought for himself.

Reardon started his journey at the age of 14 – 15 years old in a watch and clock museum, and the rest, as he puts it, is history.

WTI: How different are the watch and clock markets from each other?

JR: They are completely different. Although I personally collect clocks – english long clocks in particular from the 17th century – I don't

"Male collectors generally like the fight at auctions, they love the adrenaline rush, they're sometimes bidding just because you want to beat the other guy. They don't really mind if they overpay you just to win. A female collector would never do that." John Reardon International Head of Watches, Christie's

handle that segment professionally at all. There is a separate team, department and group of specialists exclusively for clocks at Christie's. The clock market is very soft. It's not fashionable to collect clocks, further more, it's not a top priority for the auction industry. We do auction clocks if their exceptionally unique like the Patek Philippe dome clock – which I absolutely love. But then again, they wont come under the traditional clockmaking industry.

WTI: What instigated your interest in Patek Philippe?

JR: Let's rewind to the 1990's. I was working at Sotheby's and I had absolutely no understanding of what Patek Philippe was. But I very quickly learned that the best watch in the world is a Patek and not a Rolex. I remember having so many questions for my colleagues, and Jane Puckett in particular. She was the cataloguer and taught me a lot about wristwatches. She really set me on my way to understand the world of Patek Philippe. So, when I eventually got that phone call from Patek USA, I was excited, and I was ready. Funnily enough, I'd thought it was a joke, because I had to meet this person in a restaurant of the beaten path. She did the pre-interview, and then the endless process lasted over six months. It was torture, because I knew I had a chance to get my dream job but it wasn't definite. 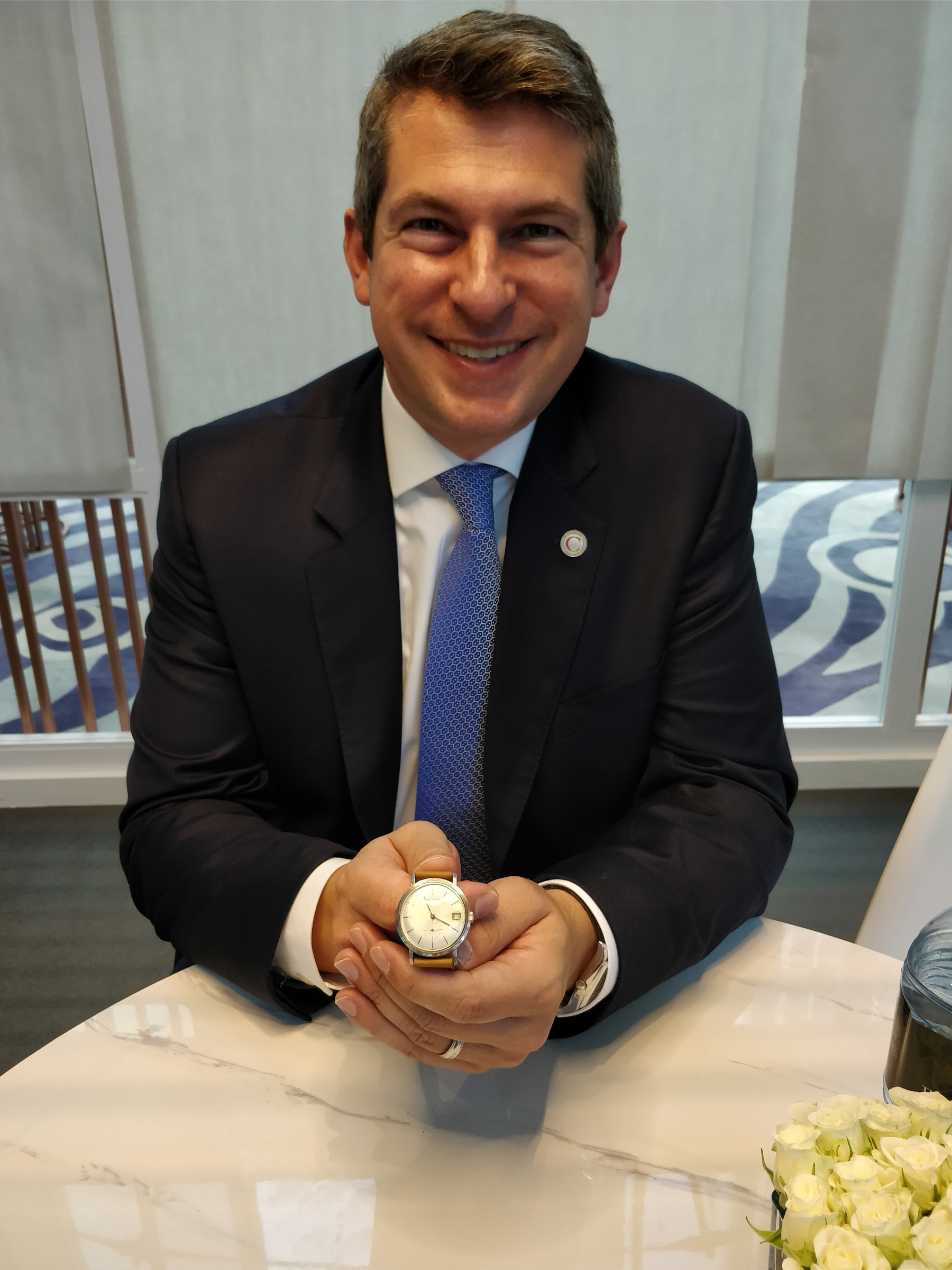 WTI: So, was it your dream job?

JR: At that point of my life, yes, it was. But, I was just starting out at the time, so I was doing things like inventory – counting the pieces and logging them correctly. There was a lot of unpacking of shipments, which sounds fun now that I think about it. We'd get these giant wooden crates which we had to open using crowbars, and then these blue shipping boxes would come out of them. Each box would contain a dozen watches. It was like Christmas morning. The crates would have maybe twelve 3970's – just like opening a treasure chest.

But over a period of time, I started missing vintage watches. The only vintage watches I saw coming in at the office were the ones that came in for repair and servicing. The head of client service and a very celebrated colleague, David Jared would come and show me any special vintage piece that he'd get – pieces which have probably been in a family for generations but have never sen the light of an auction house. So, it was an honour to see such pieces come back to Patek Philippe to get serviced for the next generation – a perfect match to their tagline.

Patek USA was a magical place to work at, and working for the Stern family was just another class apart. I have so much respect for them and the lineage that they come from. They are horological royalty in my opinion.

WTI: How different is it, working on the auction side now versus the brand side?

JR: When I started at Sotheby's, I was a cataloguer. I loved the treasure hunting. At Patek Philippe, I gave all of that up to work with the retailers and shifted my focus on selling new watches. People say, that once you work in an auction house, it's in your blood and you can always go back. You wan to go back. It's fascinating to see the number of people who have found their way back to the auction world after leaving it for some time. It's like an addiction, and the adrenaline rush you get is stimulating, both on the academic and business front. There are few jobs in the world which can combine so many disciplines likes art, history, finance, people skills all in one.

WTI: Then you might say, that the auction world is the dream you're living today?

"The Aquanaut was the first one which captured my heart, and it's a quartz! The irony!" John Reardon

JR: Let's just say, that right now, I couldn't be happier. I have a job right now, which is on a global scale but it's all about the people, and I love people. I speak at many events across the globe and I get to interact with personalities and individuals I know just by their names or I follow them on Instagram. The other thing I love about this job are the watches. I challenge you to find any other job where you get to see such spectacular works of art. The catalogues offer a very small segment of what we work on a daily basis. There are so many pieces in my mind right no, that could ignite the market. But these pieces belong to private collectors who have no mind of selling them and I, as their confidante, can't talk about these pieces. It is a dream job, yes, but it's exhausting. Luckily for us, none of my team members get into any trouble because we're all so passionate about our work and our industry.

WTI: How do you differentiate a male and female collector?

JR: The female collectors that I know, are not impulse buyers. They study and know what they want and they know how far they're willing to go to spend. They want to know if it's safe, and they want to make smart decisions by asking various opinions before sticking to their final decision. Male collectors generally like the fight at auctions, they love the adrenaline rush, they're sometimes bidding just because you want to beat the other guy. They don't really mind if they overpay you just to win. A female collector would never do that. She's more based in facts and leaves the emotion out of the auctions room. I really love that. I can see the evolution of auctions, I think there's going to be more players, people, parts of the world involved, but for female collectors, this is just the beginning. We're really living to exciting times and people are realising that auctions are open to everyone. There's no ticket needed. You can talk to a specialist and get an unbiased opinion from one and all houses.

WTI: Coming to your Patek wish list, how close are you to making it come true?

JR: Haha, I've managed to procure just one till now. So, my top choice has always been the reference 570's – I love them. I had a beautiful example, there was something in the dial, an imperfection which was unfixable, so I sold it off. But I've been looking for a 3445 in white metal for some time and I finally got it. It's from 1968. I find it so simple, and just so classic. Now, turn the watch around and you see the reason for it being so special. It's like looking under the hood of a Ferrari. The engine is so beautiful. Here you have a hand engraved 18 carat gold rotor and a hand-finished movement and the 27460 caliber that is a work of art. This has my heart.

It's humble pieces like these in my collection which send a great message for the young collectors out there that you can get a beautiful timepiece even under 5k USD. I try to buy things, except food, which are worth more than the price point. It's a level of recycling which meets investment. 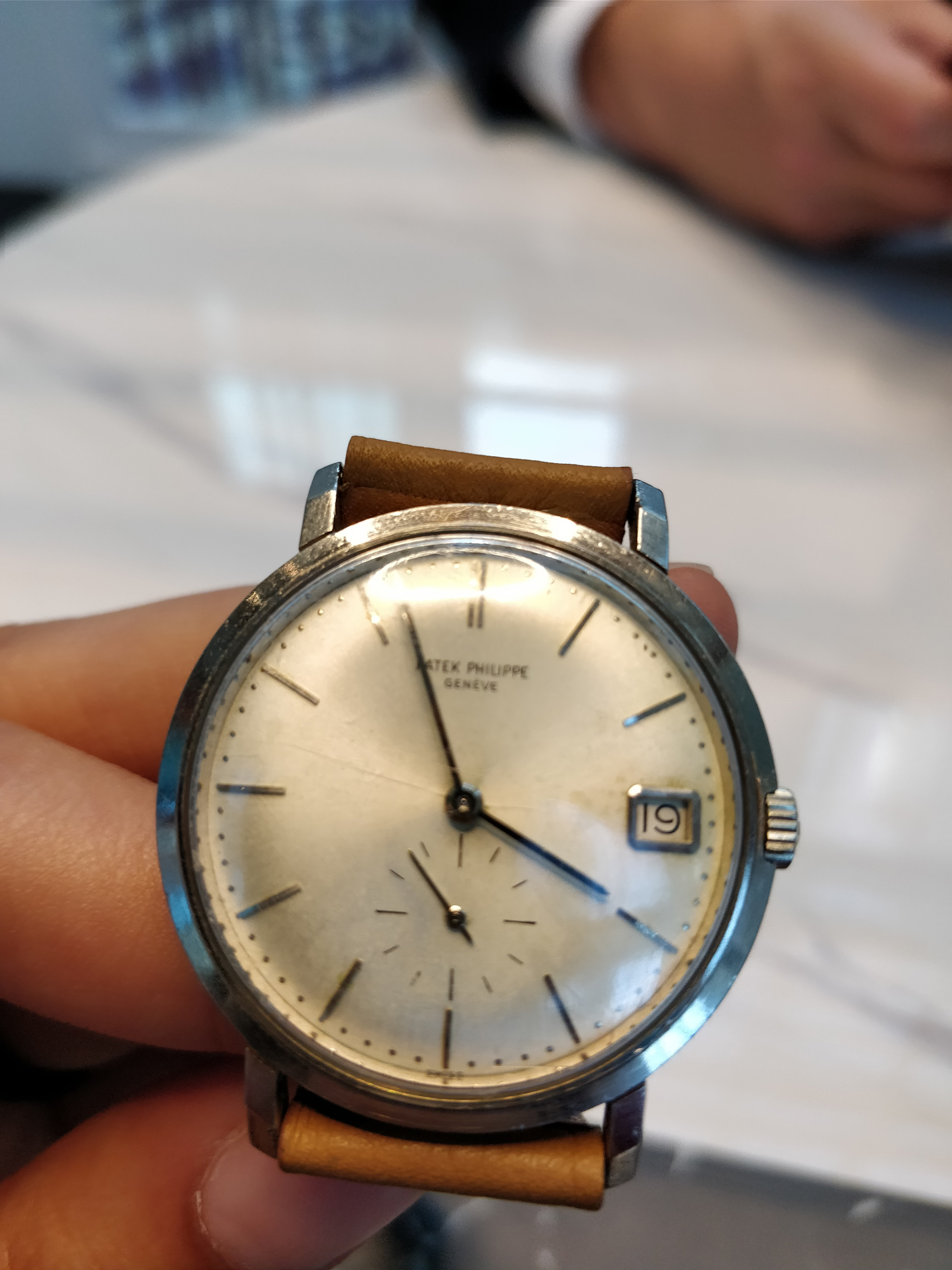 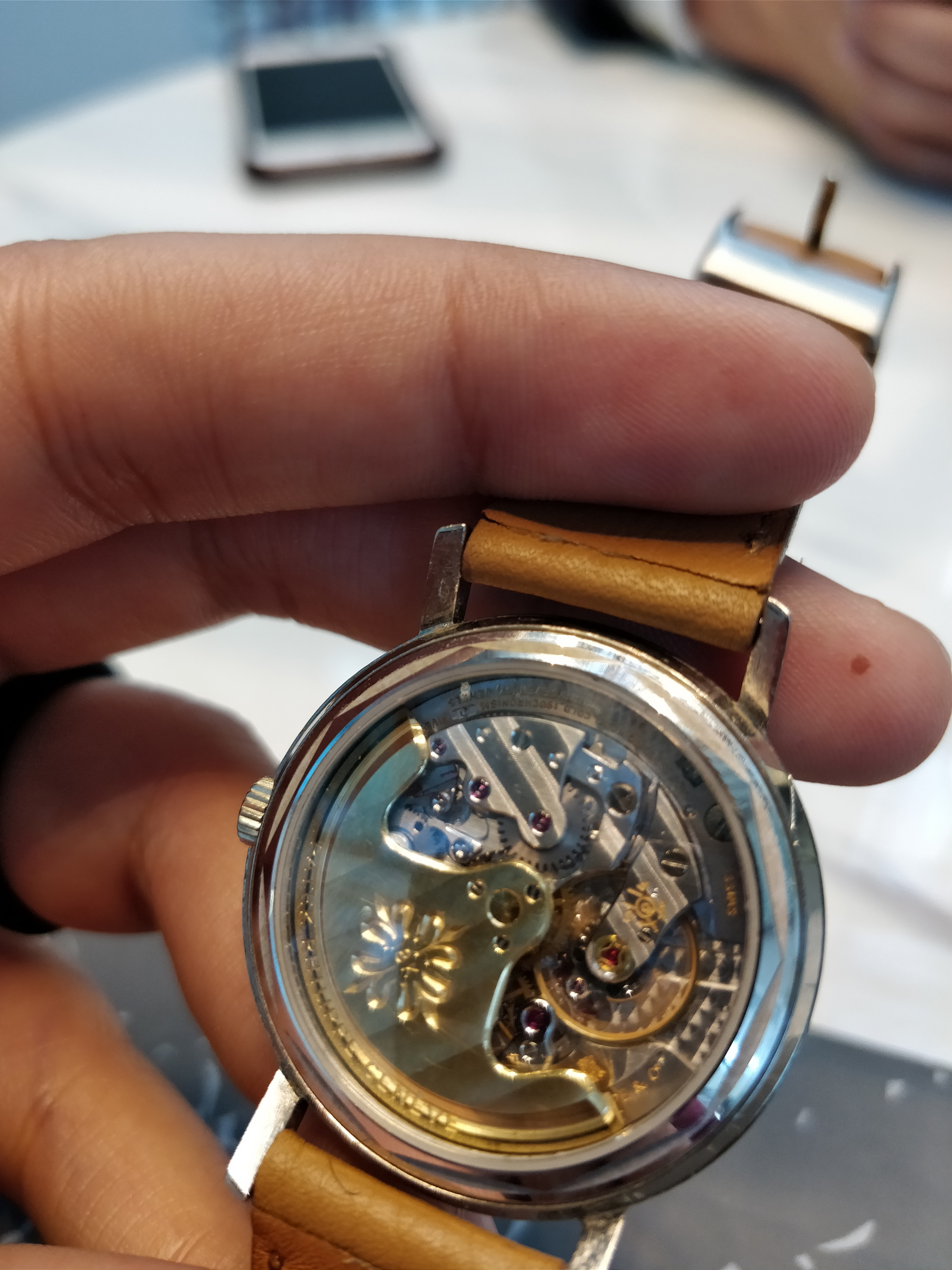 WTI: Which was your first timepiece, ahead of your first Patek – the Aquanaut?

JR: The Aquanaut was my first Patek Philippe. Before that, my first “real” watch, was an 18k gold Oscar Waldan International chronograph

"It's humble pieces like these in my collection which send a great message for the young collectors out there that you can get a beautiful timepiece even under 5k USD." John Reardon

for 3500 dollars. I met him during my tenure in Sotheby's and wanted one of his watches and the price point was not unreachable, so I bought it directly from him. It looks very much like a 3970 but for a fraction of the price. That was my first real watch.

But the Aquanaut was the first one which captured my heart, and it's a quartz! The irony!

WTI: What do you see on the cover of your auction catalogues twenty years down the line?

JR: Whenever I go to Basel or SIHH or any retail shop, I always imagine what would be on the next cover of a Christie's catalogue 20 years from now and why. I feel that independent watchmakers are the storyline of the future. There's all these new companies which are disruptive, but you just don't know. Take Urwerk for example, they've got a small production, they're innovative, they're beautiful and they're doing something different. They have the right ingredients to become an important timepiece on the auction market in the future. Would I go so far to say, buy this for investment? No, I think everyone should buy from their heart and really just buy what they love. Collectors who buy pieces as per a certain theme in mind, they always do better than those who are trying to game the market or those who are trying to buy what they have in mind with the aim of making money out of it. If people want to just invest they're better off going to a bank, to a financial advisor. If people want to do passion investing and really dig deep and understand the watch market place, it's a whole different story. I personally think that passion investing is much more fun.