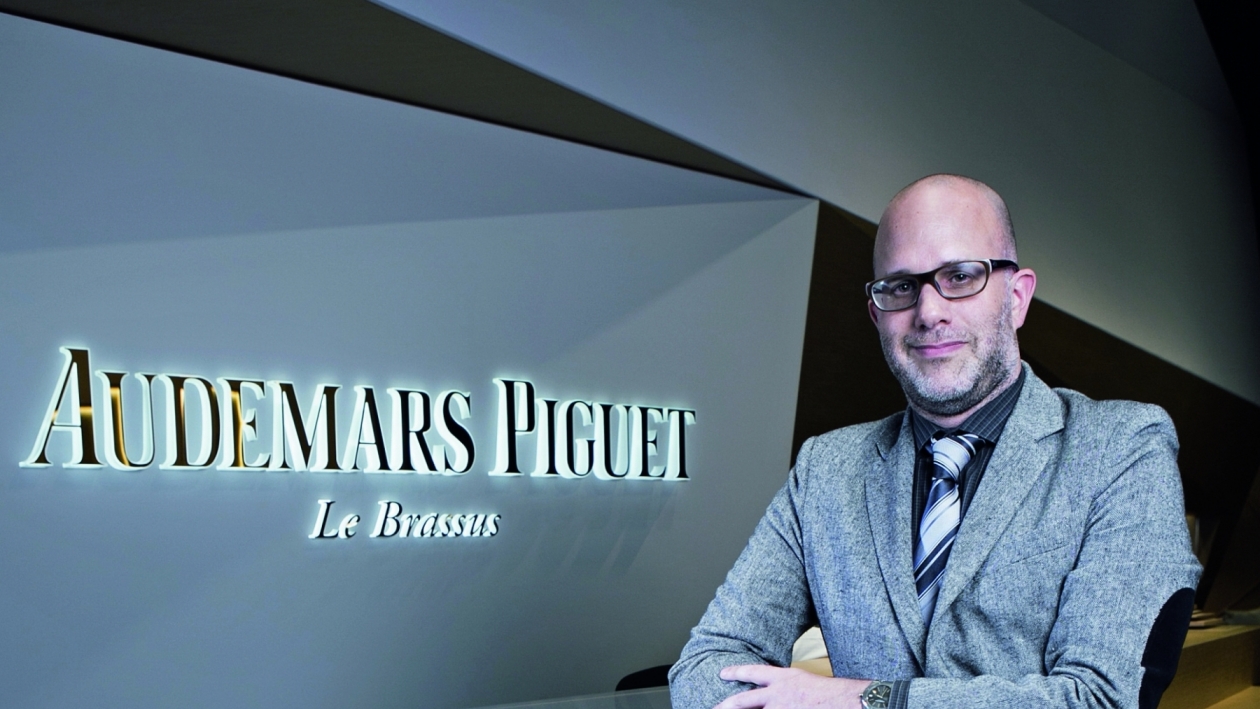 Michael Friedman takes us through the revolutionary history of Audemars Piguet, since the brands inception in 1875.

WTI:   How did the brand manage to uphold its name during the Quartz crisis in the late 1970s and emerge as the only traditional high-end Swiss watchmaker who continued to innovate?

MF: As the Quartz Crisis, Quartz Era or Quartz Revolution was underway and shaking down the traditional watchmaking establishment, Audemars Piguet was indeed one of the only companies that continued to innovate, and even grow during this tumultuous era for the industry.

First and foremost, the company never left the hands of the founding families. Family businesses have a strength of memory that is passed down through the generations. When Jules Louis Audemars and Edward August Piguet began making watches together in 1875, the Industrial Revolution was in full force. The very existence of high-end hand-finished horological masterpieces were under threat for the first time as the US and England shifted to the newly developed mass production techniques of watchmaking. It was their decision, along with other key makers in the Vallee de Joux, to primarily keep making watches with traditional methods and resources, yet to still continue to innovate both technically and aesthetically.

The next major crisis was WW1, when most watchmaking companies either slowed down or shifted direction entirely. This was followed by the Great Depression, which like the Quartz Era, had devastating effects on much of the industry, including a couple of very difficult years for Audemars Piguet (1930 and 1031). Then once again, as business began picking up again as the 1930s progressed, WWII started and the industry again had to shift accordingly. What becomes absolutely fascinating through the historical lens, is that Audemars Piguet balanced tradition, innovation and resourcefulness during these difficult eras and produced watches that were futuristic at the time, and now seem to encapsulate and illustrate the eras in which they were made. 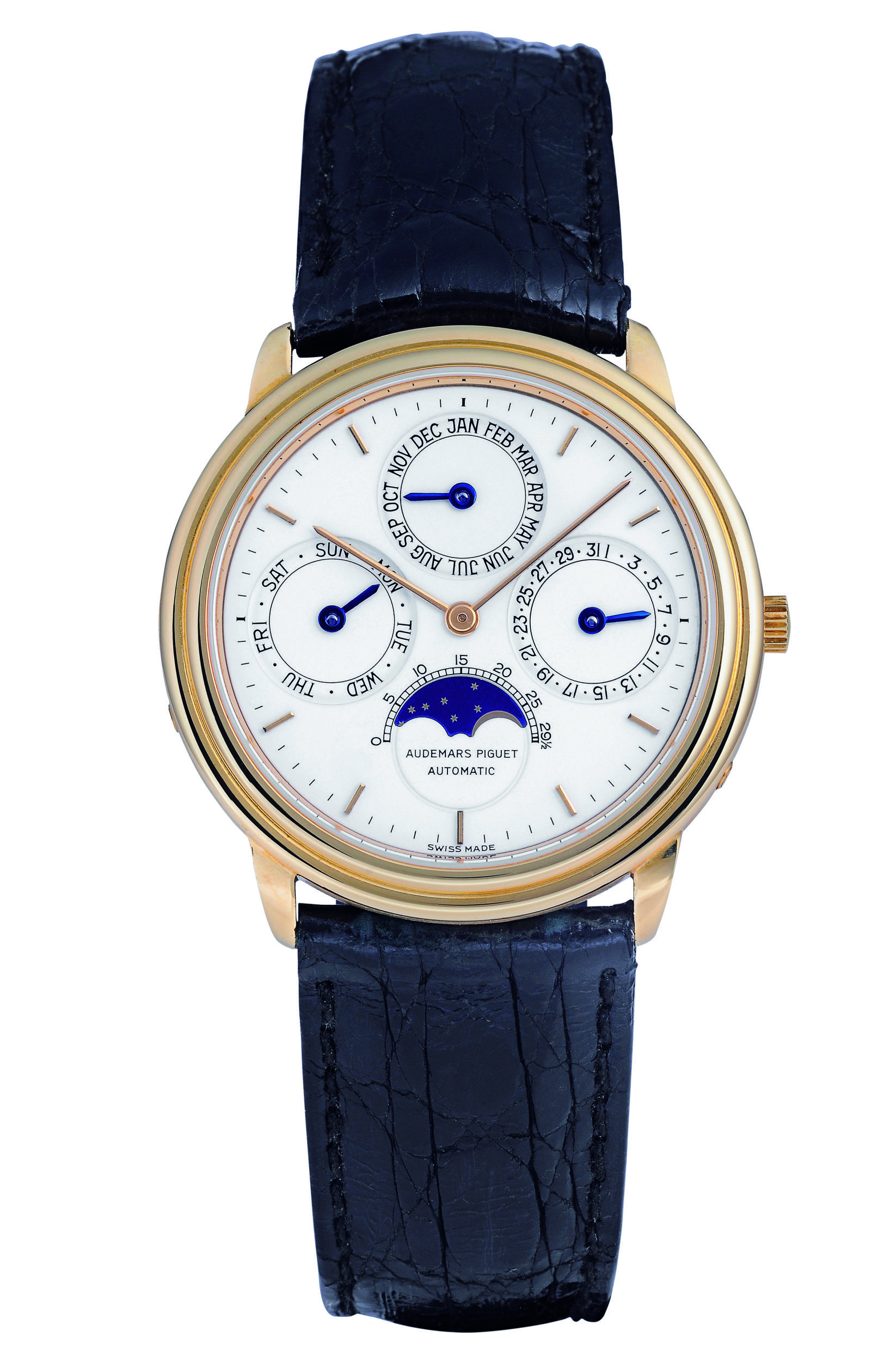 So, by the time quartz watch technology began to infiltrate the industry in the 1970s (quartz clocks had already been in existence for over 50 years, in fact the even infinitely more accurate Atomic Clock was already 20 years into its existence), Audemars Piguet had a living memory of perseverance and innovation during difficult times. It is often discussed that the introduction of the Royal Oak in 1972 was central to this success, and while this is partially true, it is not the whole story. It was the 1978 ultra-thin self-winding perpetual calendar wristwatch, reference 5548, that was absolutely central to the growth of the company in the late 70s and early 80s.

The 2120QP calibre and Jacqueline Dimmier's iconic design of reference 5548 led to increase sales and brand awareness while clearly demonstrating that there was still strong demand for impeccably finished mechanical complicated wristwatches. The spirit of innovation and rebirth of complicated wristwatches that continued in the 1980s set Audemars Piguet on a path that we are still on today. The company has always been about placing emphasis on the benches, not only the boardrooms.

WTI: What were some of the first most unusual pocket chronographs which were made by Audemars Piguet?

MF: Straight out of the gates, Audemars Piguet focused on classical complications, including the chronograph and split second chronograph, often combined with other complications. According to the archives, between 1882 and 1892, over 70 per cent of the watches made included at least one complication. What stands out in addition to this and what led the company to a great understanding of the broader market, is that Jules and Edward set out to be a global company from very early on. Clients ordering pocket chronographs included several other well-known watchmaking firms and key retailers of high-end watches.

No two watches were ever identical. In fact, Audemars Piguet watches were not made in duplicates or with 'reference numbers' until 1951. Audemars Piguet made watches for the market they were intended for. Highly stylised Arabic numbers on the dials of watches destined for the USA, more traditional dials and ¾ movement plates for watches made for the England, varying sizes and thickness for clients with different tastes, etc. The distinct rule-breaking and peculiarity begins to take heightened form in the early 1900s. By this time, Audemars Piguet had forged a clear identity of their own and had developed an impeccable reputation for crafting both highly complicated as well as miniature watches. It is during this era when the dials get highly creative, the case materials and case shapes get less conventional and the path towards producing thinner watches for emerging tastes and fashions is implemented.

WTI: The deadbeat seconds function was one of the rare functions used in the Jules Louis Audemars School Watch. Could you tell us more about this fascinating timepiece?

MF: Jules Louis Audemars' school watch was completed in its first incarnation prior to the origins of Audemars Piguet in 1875 and transformed in the workshops over the following two decades. It is a poignant demonstration of his exceptional watchmaking talents even at a young age. The complicated masterpiece combines perpetual calendar with a quarter repeating mechanism and includes the rarely seen independent deadbeat seconds function. The deadbeat seconds is displayed by a central hand that distinctly stops or ticks at each seconds' indicator before precisely jumping to the next position – 60 jumps per minute. By comparison, most mechanical watches have a small seconds (i.e. subsidiary seconds) or center seconds that is continuously sweeping around the dial.

Jules' school watch is cased in 18-carat pink gold and the dial is made of white enamel, featuring Roman hour numerals, outer seconds track and Arabic five-minute divisions all in black. The large movement requires not one, but two spring barrels. The deadbeat seconds consumes such a large amount of energy, hence the need for a dedicated spring barrel and gear train. 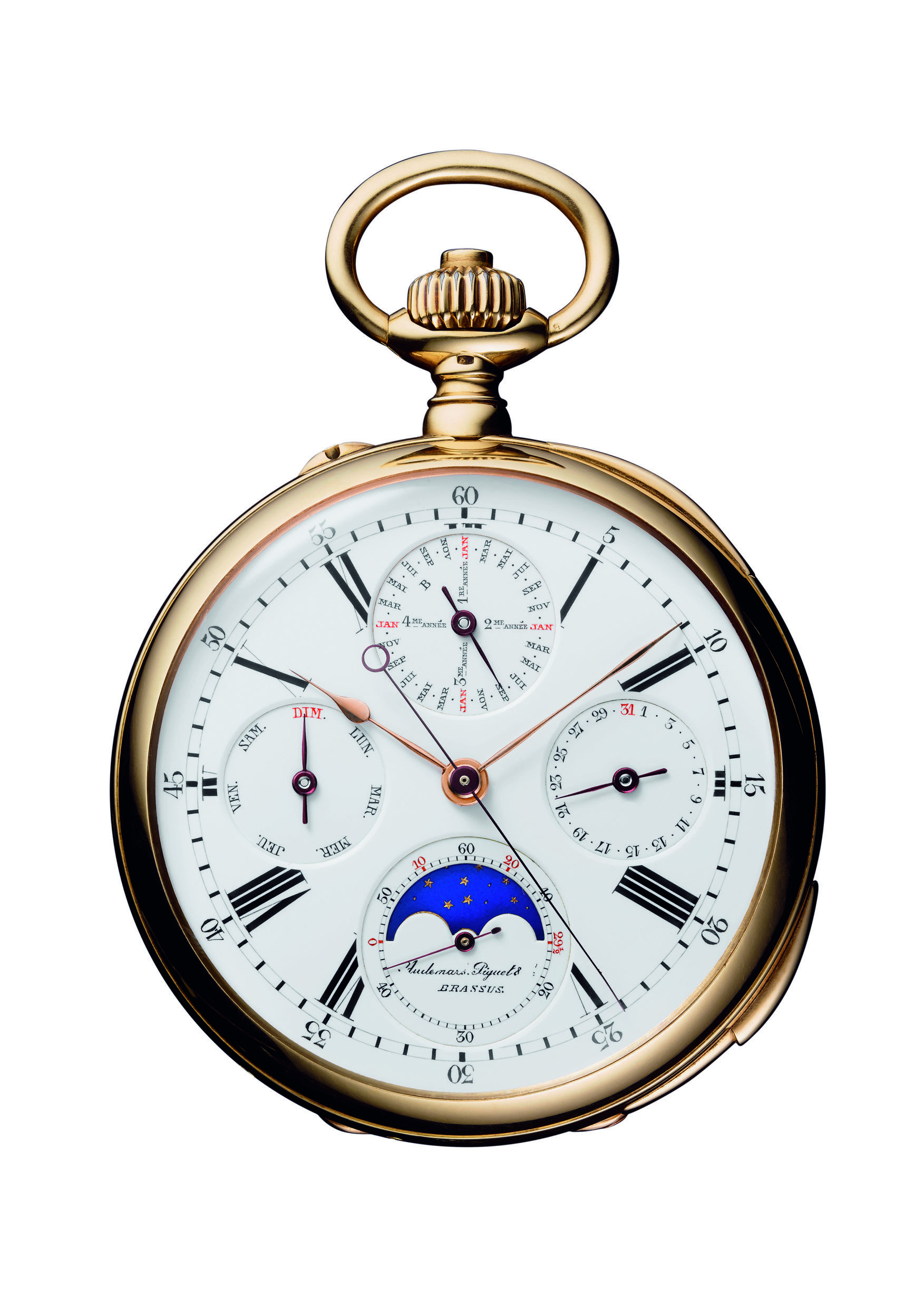 WTI:How has the Chiming complication evolved over the years?

MF: The Chiming technology is as old as mechanical horology itself. In fact, the word 'clock' derives from the Latin term, 'clocca' which translates to 'bell'. The earliest mechanical clocks in medieval Europe were not originally constructed with dials or hands. They were essentially automated bell striking mechanisms. As large public clocks got miniaturised in size to table clocks during the 1400s and eventually to watches by circa 1500, chiming technology, typically in the form of alarm mechanisms, were incorporated into their design. The Quarter Repeating watch emerges towards the end of the 17th century, and this is the true ancestor of the modern minute repeater. It differs from alarm mechanisms as it can be activated on demand and provides an audible representation of the time on the dial of watch. Technology has greatly influenced the development and evolution of chiming watches. From advancements in precision tools during the 18th century to the advent of CAD (computer-aided design) in the late 20th century, advances in technology can positively impact even a very traditional hand-crafted art like watchmaking by allowing even the most creative and laterally-thinking watchmaker to achieve and perfect their vision.

WTI:  How would you perfect the Chiming complication?

MF: Even if I were not a historian at Audemars Piguet, I would be crediting the direction that this creative family business has taken. For the development of the Supersonnerie technology, Audemars Piguet pushed the boundaries of research and development beyond the scope of watchmaking itself, and along with the EPFL we studied the principles of musical instrument design and the neurology behind the human audible experience. This to me is the truest pursuit of perfection – when interdisciplinary walls are broken down in the quest to create something truly technologically innovative that elicits an emotive response. 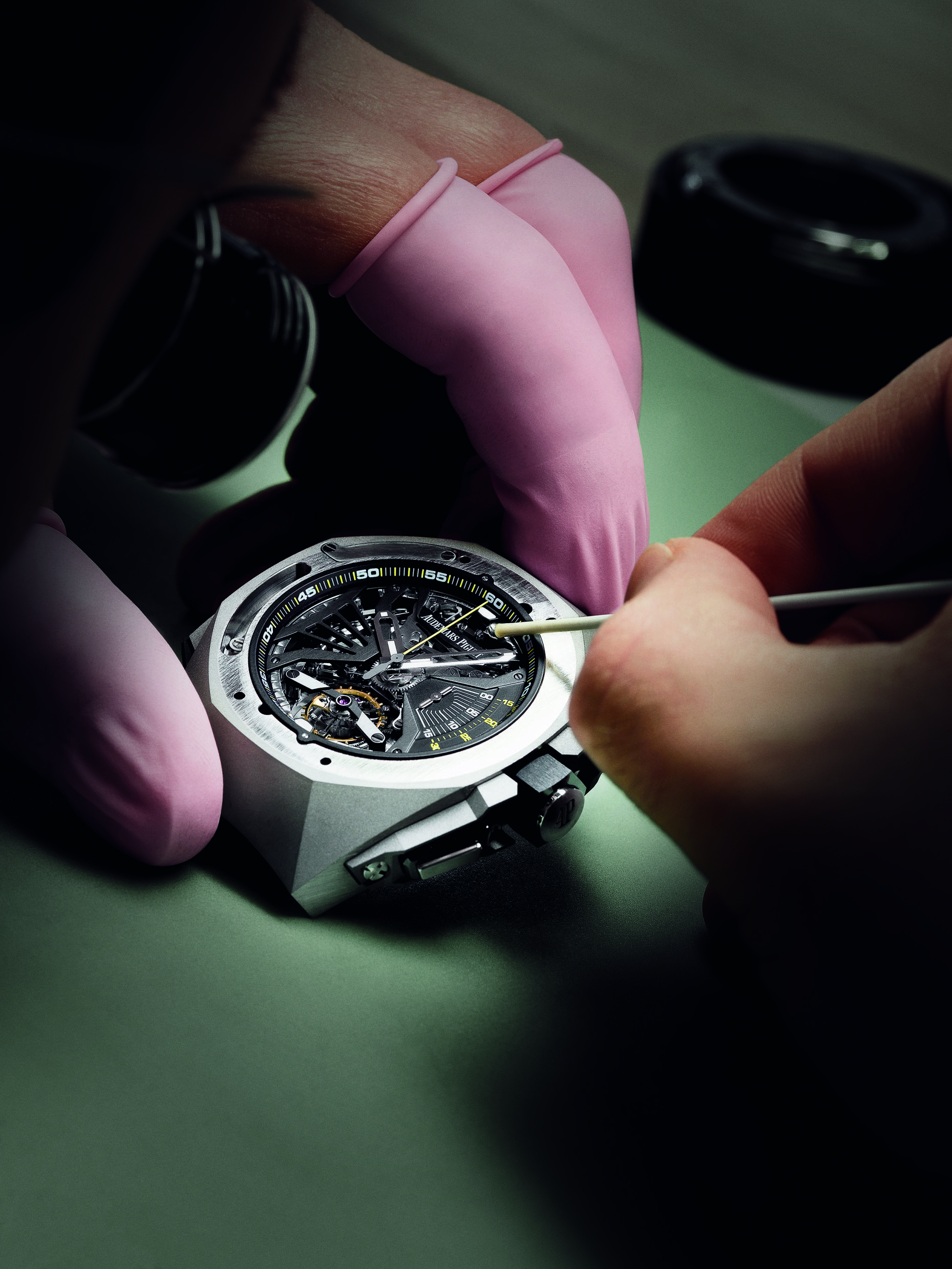 WTI: The Minute Repeater complication comprises of the maximum number of parts. What are the various steps one has to keep in mind to perfect the complication?

MF: I am not a watchmaker but I have asked several great watchmakers questions along these lines over the years. The Minute Repeater is a very complicated watch, but it is ultimately experienced more like a musical instrument. No  matter how much time, how many components, how well-finished, how perfect the geometry is, what materials are used, etc., if the repeater mechanism does not sound perfectly in tune and pleasing to the ear – and by this I mean if it does not elicit an emotional reaction as one would expect upon hearing a musical instrument – then the watchmaker will likely not be satisfied with the end result. The admirer, buyer and collector of the minute repeater desires an uncompromising sonic experience of purity.  I often describe watches as having three distinct elements: the case – a reflection of sculpture and architecture, the movement – a reflection of the art of engineering and precision, and the dial – a reflection of pure design language. The minute repeater adds a fourth layer to this equation – a reflection of music, the experience of hearing the passage of time through a series of purely sequenced notes.