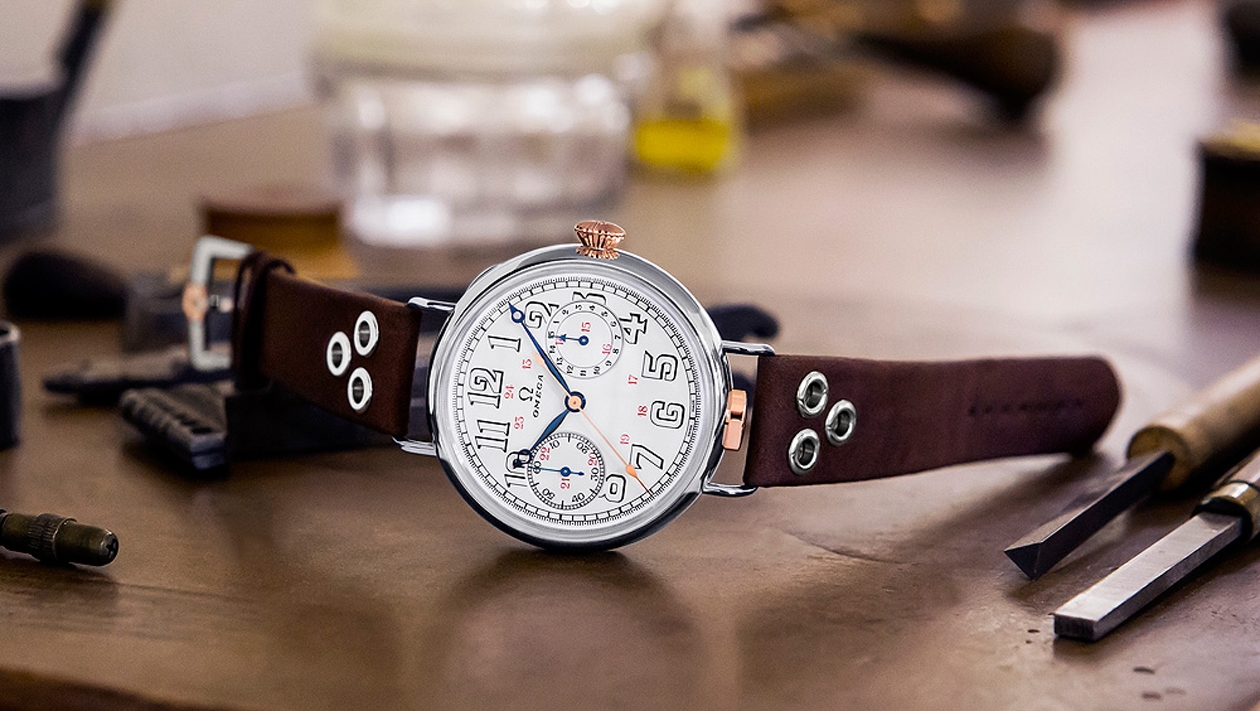 Omega made its first chronograph to be worn on the wrist in 1913, during that transitional era of timekeeping history when pocketwatches were beginning to fall out of fashion in favor of the newly ascendant wristwatches. This week, the venerable Bienne-based manufacture announced the milestone launch of 18 historically influenced timepieces, designed to channel the look of the 1913 original and outfitted with refurbished movements from that bygone era. Here’s what you need to know about the “First Omega Wrist-Chronograph Limited Edition.” 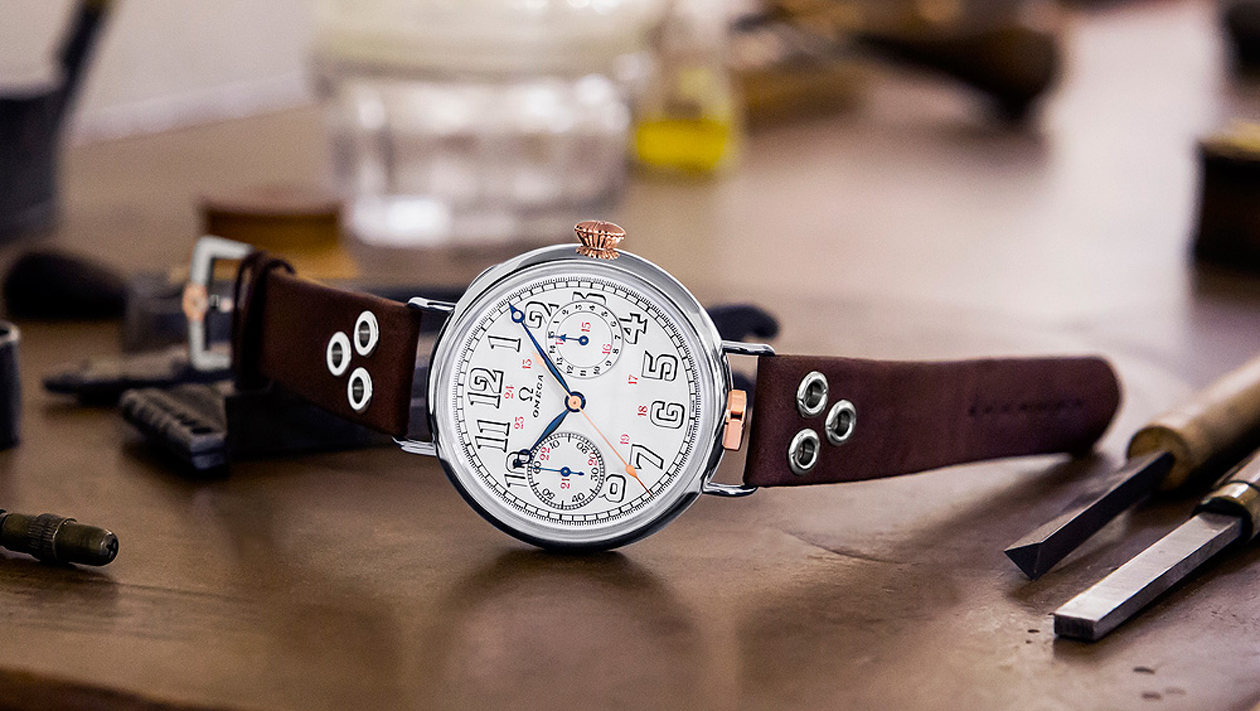 The watch is unmistakably a homage to the early 20th-century piece, a favorite of military pilots during the First World War, with its pocketwatch-

"The price for this rare and exclusive ensemble — and your chance to own a true touchstone in watchmaking history — is 120,000 Swiss francs (at press time, approximately $120,970)."

sized 47.5-mm round case made of 18k white gold; its aviation-style riveted leather strap; and its white grand feu enamel dial, swept over by vintage-style “Empire” hands and marking the hours with hollowed out Arabic numerals in a period-appropriate font. Its bicompax design features a subdial at 9 o’clock for running seconds and another subdial at 3 o’clock with a now-rare 15-minute chronograph counter, a type popular among pilots at the time. As a nod to Omega’s more modern innovations, the brand’s proprietary Sedna gold is used for the crown and chronograph pusher, the latter ensconced at the 6 o’clock position. 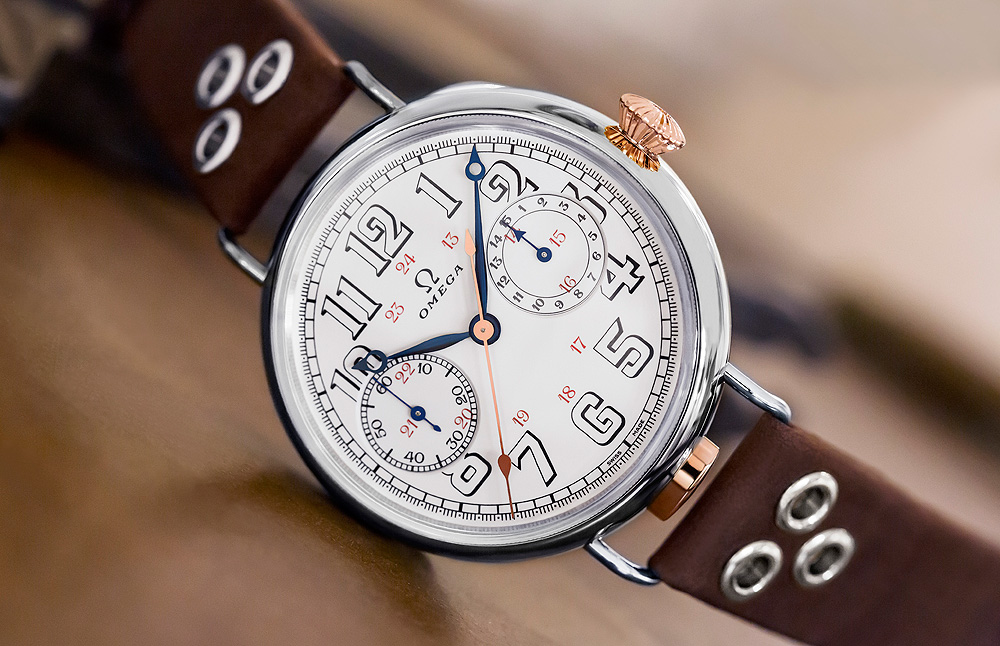 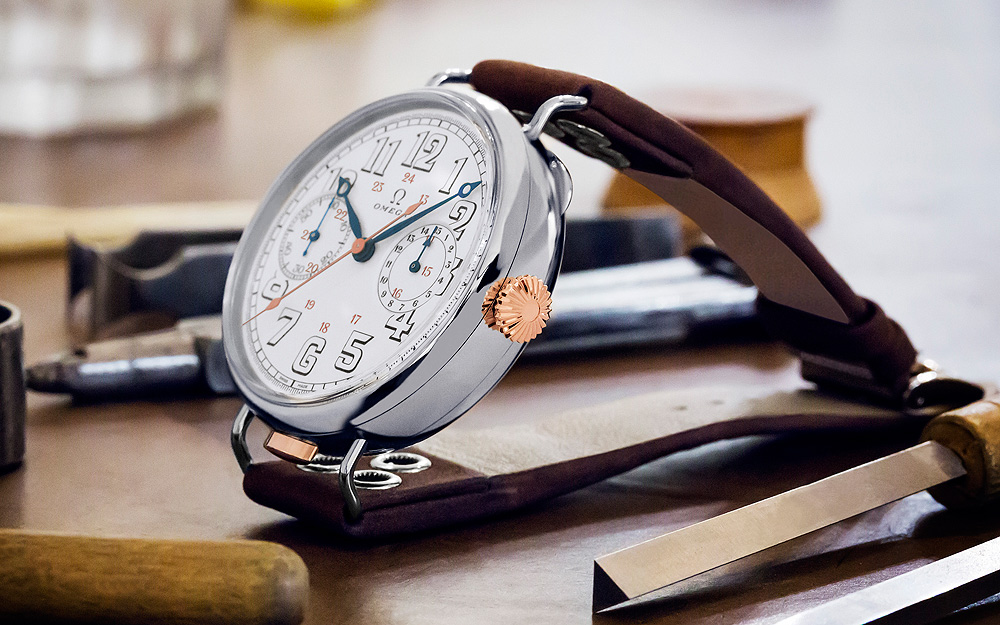 Even more intriguing to vintage-watch aficionados is the movement on the inside, which can be admired through a sapphire window under a hatched caseback: the 18″‘CHRO caliber. Used in the very first wrist-borne chronograph watch made by Omega, it was a renowned and popular stopwatch movement that remained in production for more than two decades. The 18 specimens used to build this extremely limited series of modern watches had rested for years inside historical timepieces in the vaults of the company’s museum. Expert watchmakers at Omega’s Atelier Tourbillon painstakingly rebuilt and refinished the vintage movements, including having to create or re-create some components from scratch, in order to bring them to modern standards of top-shelf haute horlogerie. 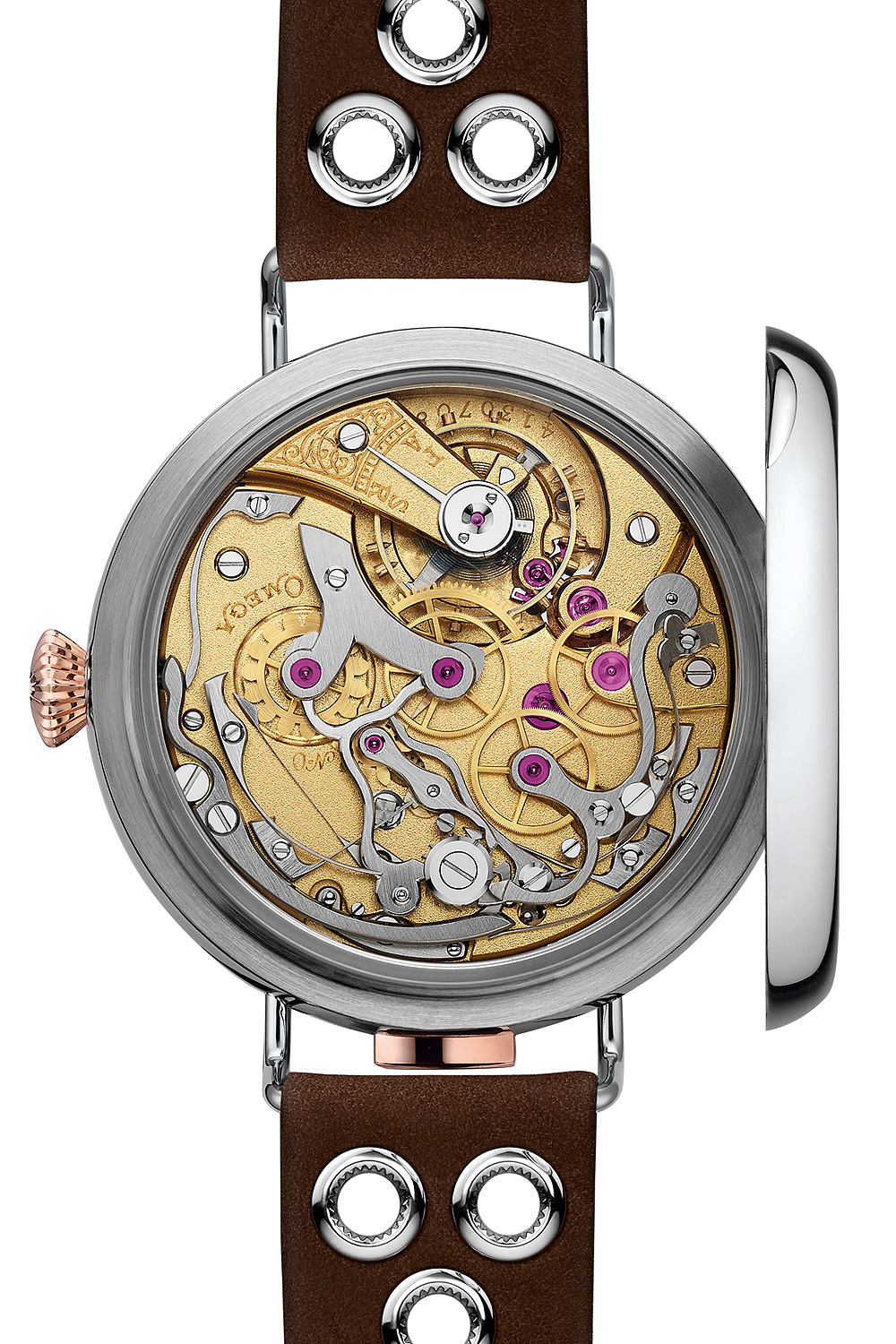 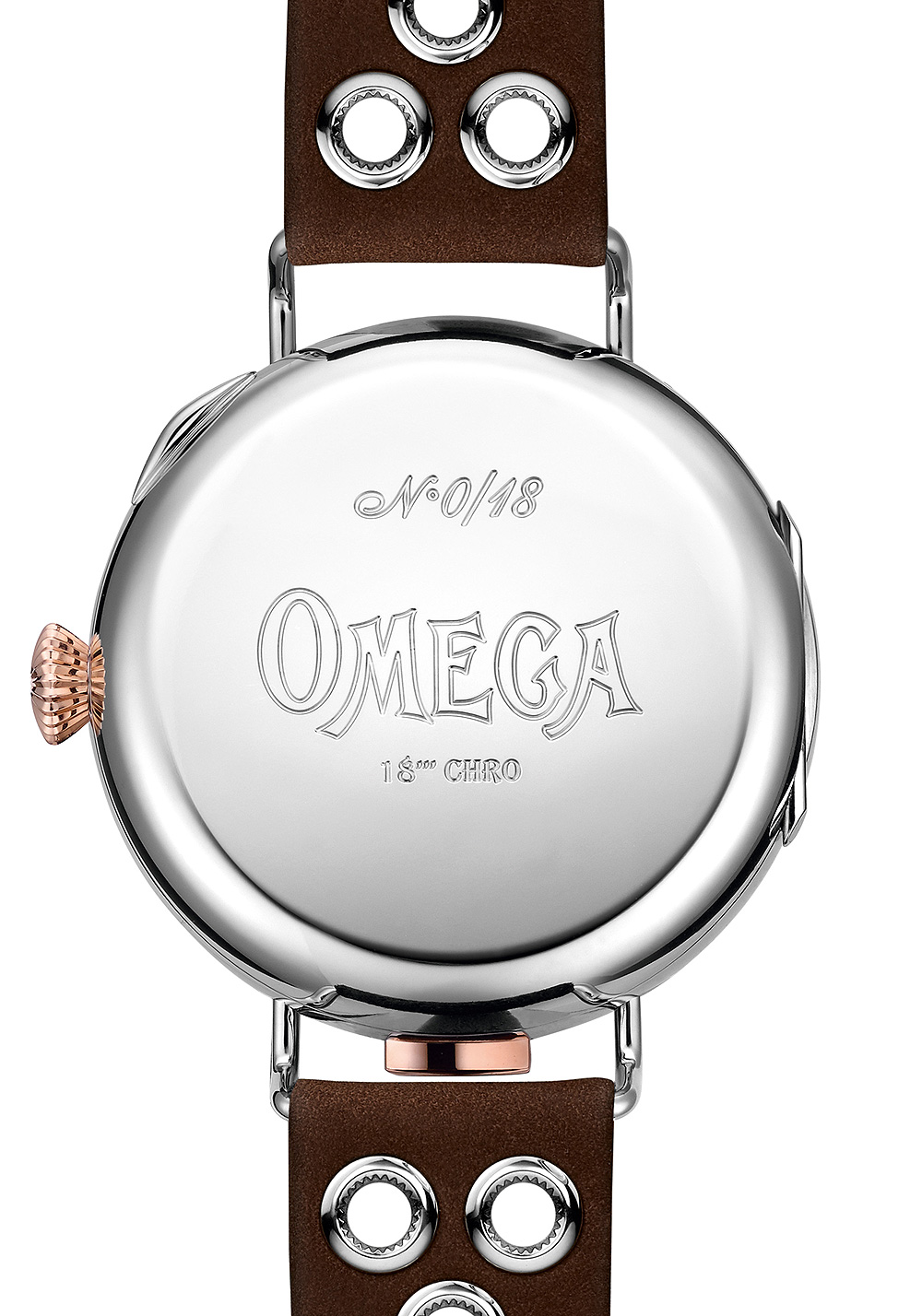 Each of the 18 watches is presented in a handcrafted leather-bound trunk, along with two additional leather straps, one in burgundy tone, the other in “golden brown novonappa; special strap-changing tools; a loupe, and a travel pouch. The price for this rare and exclusive ensemble — and your chance to own a true touchstone in watchmaking history — is 120,000 Swiss francs (at press time, approximately $120,970). 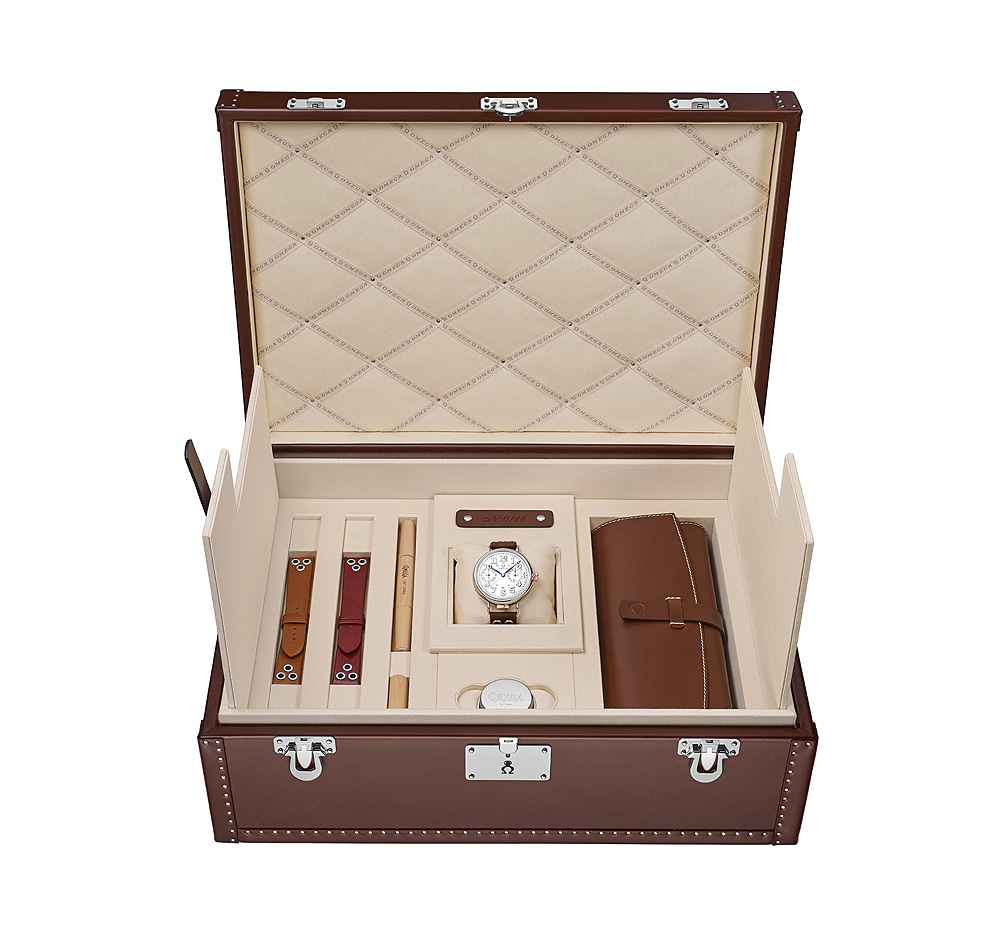