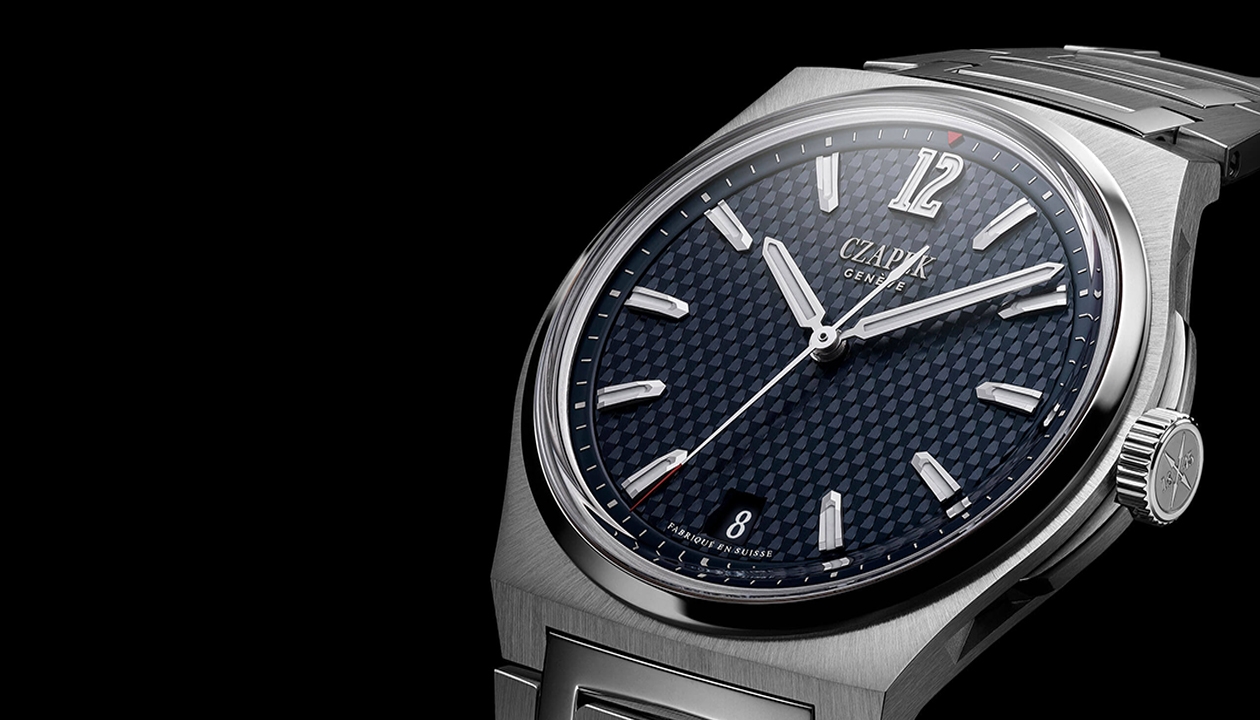 From Czapek's Quai des Bergues No 33 to the rare chronograph timepiece Faubourg de Cracovie, here's what the brand has to offer.

At this year's Geneva Watch Days, Czapek dropped its Only Watch candidate - the new Antarctique Rattrapante, a limited edition of 77 watches. A high-end chronograph complication with the split-seconds mechanism visible through the dial. The buzz continues as Czapek pieces make some noise in India with a set of new mechanical timepieces being talked about. Czapek was revived in 2015 with a spectacular Quai des Bergues collection, whose leading model won the Public Prize in the Grand Prix d'Horlogerie de Genève (GPHG) in November 2016.

The genesis and disappearance

In 1811, a man was born in Semonice, the kingdom of Bohemia - now called the Czech Republic. The man, Franciszek Czapek, emigrated to Poland with his family when he was young and retained Czech and Polish citizenship. In 1832, Franciszek fled to Switzerland following the collapse of the Polish uprising.

The talented watchmaker soon founded his first company -- Czapek & Moreau -- with a local partner and Gallicized his name to François Czapek. This collective endeavour was short-lived, but not stopping at that, he teamed up with another Polish immigrant by the name of Antoine Norbert de Patek in 1836. Together, they founded the company Patek, Czapek & Cie on May 1, 1839.

This partnership gave birth to several exceptional timepieces for six years. At the end of their contract, in April 1845, they dissolved the partnership, but both watchmakers continued producing timepieces. Czapek founded Czapek & Cie on May 1, 1845, with a new partner - Juliusz Gruzewski.

His meticulous watchmaking skills caught the attention of nobility - purveyor to the Imperial Court, Watchmaker of His Imperial Highness, Prince Napoleon. Czapek was quickly recognised as one of the greatest watchmakers of the 19th century. This success resulted in Czapek's boutiques in Geneva, Warsaw, Paris, and Place Vendôme. Czapek even wrote a book on watchmaking, one of the first of its kind ever written in Polish.

After writing the book and becoming one of the most prominent watchmakers of the 19th century, he passed away. An event deemed Czapek's mysterious disappearance in 1869, given how next to no information existed on when he died, how he died, and when the company went out of business after his demise.

The revival and instant success

A grand legacy never fades away, just like Czapek's. The Czapek company name was re-established in 2012 when three entrepreneurs decided to revive the company by relaunching it. They created a library of Czapek timepieces to understand his work and personality. Inspired by this, they worked on new designs.

A fundraiser was organised and the three entrepreneurs received an investment of over CHF 1.1 million (approximately Rs 8.95 crore today), by February of 2016. As many as 93 investors from 11 countries came together to make this happen.

The relaunch event saw the participation of journalists, friends, and watch lovers in Geneva. These Czapek enthusiasts were given the opportunity to take part in the great adventure of Czapek's revival.

Soon after the relaunch, Czapek & Cie won the coveted Public Prize at the GPHG. And the prize winner - the Quai des Bergues No.33bis, which is currently sold out and will not be available until April 2022. The Quai des Bergues collection is a tribute to the location where François Czapek founded the company in Geneva in 1845. Every year since 2016, Czapek has launched a new collection with a new calibre: The Place Vendôme in 2017, the Faubourg de Cracovie in 2018.

In 2017, Czapek launched its second collection -- the Place Vendôme Tourbillon Suspendu 'Ici et Ailleurs' -- which was named after the Parisian square where François Czapek opened a boutique in 1850, assumed to be the first fine watchmaking boutique ever on this world-famous square.

The year 2018 saw the release of the Faubourg de Cracovie chronograph - Czapek's third collection. It is named after the location of François Czapek's third boutique, opened in 1854 in Warsaw, Poland.

After a century and a half of absence, the company opened a new boutique in Geneva, Rue de la Corraterie 18 in 2019. This boutique is only a few steps away from the original Czapek's atelier, established in 1845 in the Quai des Bergues in Geneva.

The revival of Czapek first started by exploring the watches portfolio of the former collection. And then, one particular timepiece emerged. The simple yet fascinating 1850's pocket watch N°3430 became the centre of attention. Its contemporary Quai des Bergues 33bis sibling draws massive inspiration from the original with its large white enamel dial underlined by the extended numerals. The combination of Fleurs de Lys (hours) with Trident (minutes) forged hands creates a beautiful design aesthetic.

The two decentred subdials, one at 4.30 o'clock and the other at 7.30 o'clock, create an asymmetry on one side and symmetry on the other. Finally, the remarkable double hand power reserve indication with weekdays brings forth the authenticity of Czapek's design approach.

The subdials of the modern Quai des Bergues also display the running seconds between 7 and 8 o'clock, and the power reserve indicator between 4 and 5. The seven-day power reserve is indicated by a two-headed hand, which points to the number of days on one end, and the seven days of the week, on the other.

The Quai des Bergue No.33bis is driven by the proprietary double-barrel modern calibre SXH1, a manual-winding movement decorated with sandblasting on the bridges with hand-finished angles. This can be seen through the caseback of the 42.5mm case in rose gold. The watch is offered on an alligator strap with 5N rose gold buckle.

The most elaborate dials created by Czapek have featured a special guilloche pattern that they call 'ricochet guilloche'. This pattern draws inspiration from a design created by François Czapek in 1850 and features an intersection of concentric circles and arcs that result in unparalleled magnificence.

The Quai des Bergues Sapphire Blue S with 'ricochet guilloche' and sapphire blue enamel dial presents a stunning blue aesthetic. This model combines guilloche with enamelling of the flinqué variety. The enamel is applied directly onto the guilloche-engraved pattern with a quill pen or brush - a process that is generally repeated about four times and then it is 'baked' at very high temperatures.

The numerals and markers are then stamped onto the guilloche-enamelled dial. The enamelling of blue onto the dial, along with the ricochet pattern creates a stunning depth. This sapphire blue model comes housed in a 38.5mm steel case, powered by the same manual-winding calibre SXH1 that runs the GPHG-winning edition, offering a seven-day power reserve.

The Quai des Bergues Sapphire Blue S features a blue handmade flinqué enamel dial with steel hands with white galvanic treatment. The watch is presented on a matte dark blue alligator strap and is a limited production of 10 per year with a maximum of 100 in total.

The collection Place Vendôme has been named after the famous Parisian square where François Czapek had opened a flagship boutique when his brand was expanding outside of Switzerland. The timepiece in the limelight is the Place Vendôme Dark Matter. Seen between seven and eight, and four and five o'clock are the one-minute tourbillon (which also serves as the seconds indicator), and GMT display, respectively.

The front of the timepiece features an anthracite honeycomb plate and steel bridges treated with PVD coating while the caseback flaunts an open ratchet with circular bevelling. This 10-piece limited edition is driven by the proprietary Calibre SXH2 - mechanical hand-wound movement developed by Chronode and Czapek & Cie. The engine delivers a power reserve of around 60 hours that is churned out by one barrel spring.

The Champlevé dial with a grand feu black enamel ring displays arrow hands in white gold with Super-LumiNova. The black timepiece has functions such as hours and minutes on separate dial located at 12 o'clock, one-minute tourbillon located at 8 o'clock, second time zone on subdial at 4 o'clock, and disc day/night indicator located at 6.

The Dark Matter finds its home in a 43.5mm titanium Grade 5 case with ADLC coating and is presented on an alligator strap with a titanium buckle.

The Faubourg de Cracovie chronograph is the company's third collection and the calibre inside is also Czapek's third, following the seven-day manually-wound movement in the Quai des Bergues and the suspended tourbillon with GMT in the Place Vendôme, both famous locations of the late François Czapek.

The movement that powers these watches is the automatic calibre SXH3. With an integrated column-wheel chronograph, this movement offers a significant power reserve of at least 65 hours when it's fully wound with the regular 30-minute and 12-hour chronograph counters and small seconds with a date aperture at three, nine, and six o'clock respectively.

There's a version of the ricochet guilloche pattern, in blue, and another variant with a pristine white enamel dial. These watches come in 41.5mm steel cases that offer a  water resistance of up to 50 metres.

The Antarctique is a 40.5mm three-hander which offers an edgy, sporty look. The transparent caseback reveals the model's beating heart - 30mm SXH5.01 automatic in-house calibre that delivers a power reserve of around 60 hours.

"This watch, whatever the colour, is a thrill for both the newcomer and the horological expert," says Czapek's CEO Xavier de Roquemaurel. "The neophyte will instinctively fall in love with the dial and the remarkable movement inside, while the expert can use the watch almost as an exhibition piece to explain how a movement works and what makes haute horlogerie so unique."

Offered in the collection are two models - the Antarctique Terre Adélie and Antarctique Passage de Drake. The Terre Adélie has been adorned with an exclusive 'Lamé' dial that features luminescent, rhodium-plated steel hour markers. The timepiece is offered on an integrated stainless-steel bracelet with Czapek's exclusive 'Easy Release' system and an additional calf leather or rubber strap is also a choice.

The Antarctique Passage de Drake features a stamped flinqué dial with the exclusive, officially registered 'Stairway to Eternity' pattern and luminescent, rhodium-plated steel hour markers. Water-resistant up to 120 metres, the watch is offered on an integrated stainless-steel bracelet with Czapek's exclusive 'Easy Release' system and additionally comes with a calf leather or rubber strap.