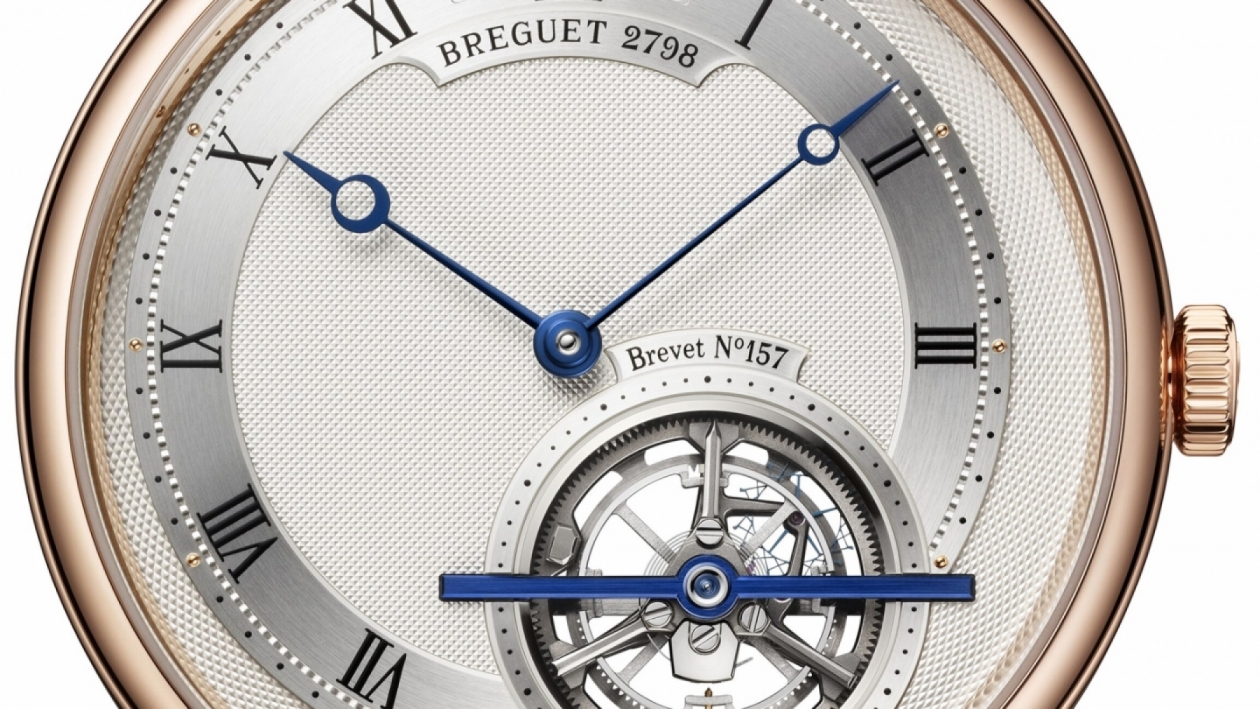 The House of Breguet celebrates the 220th anniversary of the Tourbillon with the all new Classique Tourbillon Extra-Plat Anniversaire 5365.

The year was 1801 when French-Swiss watchmaker Abraham- Louis Breguet secured the patent for his invention “tourbillon” or “whirlwind”. He described it as the “watch compensating for all of the inequalities that may be found in the balance wheel and mainspring”. Since then the tourbillon has become an important part of the watchmaking industry.

A classic example of watchmaking feat, the tourbillon has been an exceptional part of watchmaking history. So its comes as no surprise that on its 220th year anniversary, the House of Breguet is all set to commemorate this special invention with the newly launched Breguet Classique Tourbillon Extra-Plat Anniversaire 5365. Limited to just 35 pieces (the total number of tourbillon watches that Abraham- Louis Breguet had made in his lifetime), the Breguet Classique Tourbillon Extra-Plat Anniversaire 5365 marks a heartfelt tribute to the timeless aesthetic and the geniuses of the master watchmaker. 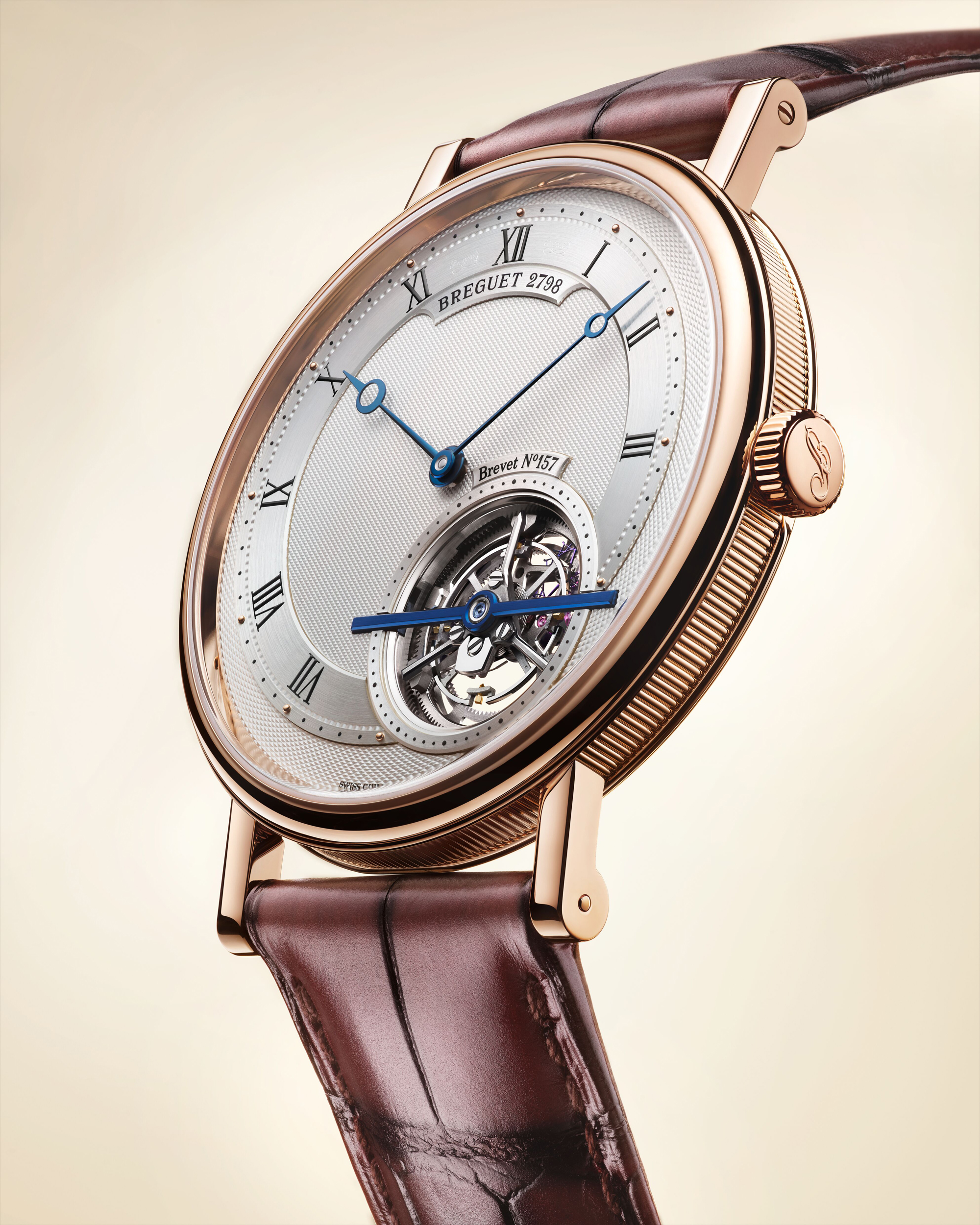 Crafted in a 41mm roses gold case, the watch features all the design codes of the brand. It is elegant and understated and offers an aesthetic that was put in place by their founder. The rose gold case comes equipped with a delicately fluted caseband and welded lugs and screwbars that provided ultimate comfort and ease while wearing the watch. The 18K engine-turned silvered gold dial is treated with two different decorations; Clous de Paris and grain d’orge. The former takes up the entirety of the dial and is handmade with a diamond chisel. The latter which is also called “barley grain” takes up the outer edges of the dial. The Clous de Paris treatment of the dial gives off a matte finish when seen from a usual distance of 50 centimetres making it easier for the wearer to read the hours and monutes that are indicated by the two centralised blued steel off-centre open-tipped hands that are now called “Breguet hands”. 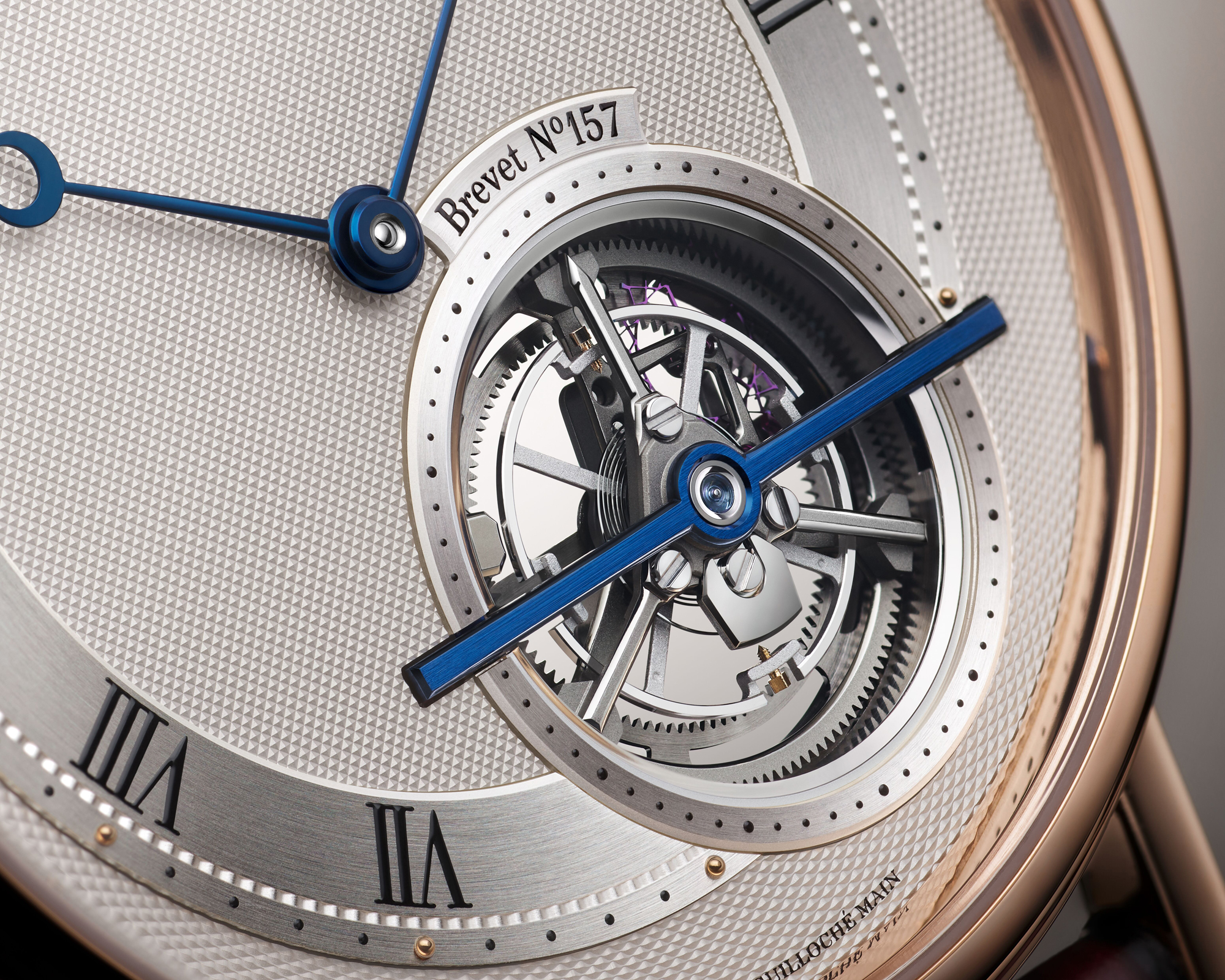 The anniversary piece is equipped with a 60-second tourbillon movement that can be seen on the dial between 4 and 6 o’clock. Breguet mentions two special features on the dial that are more noticeable by observant horologists. These include the upper bridge of the piece that is made of blued steel (an unusual finish for a tourbillon in the Classique collection) and the cartouche affixed above the tourbillon, bears the text “Brevet No 157”, a reference to the patent number awarded to Abraham-Louis Breguet for his invention a mere 220 years ago. 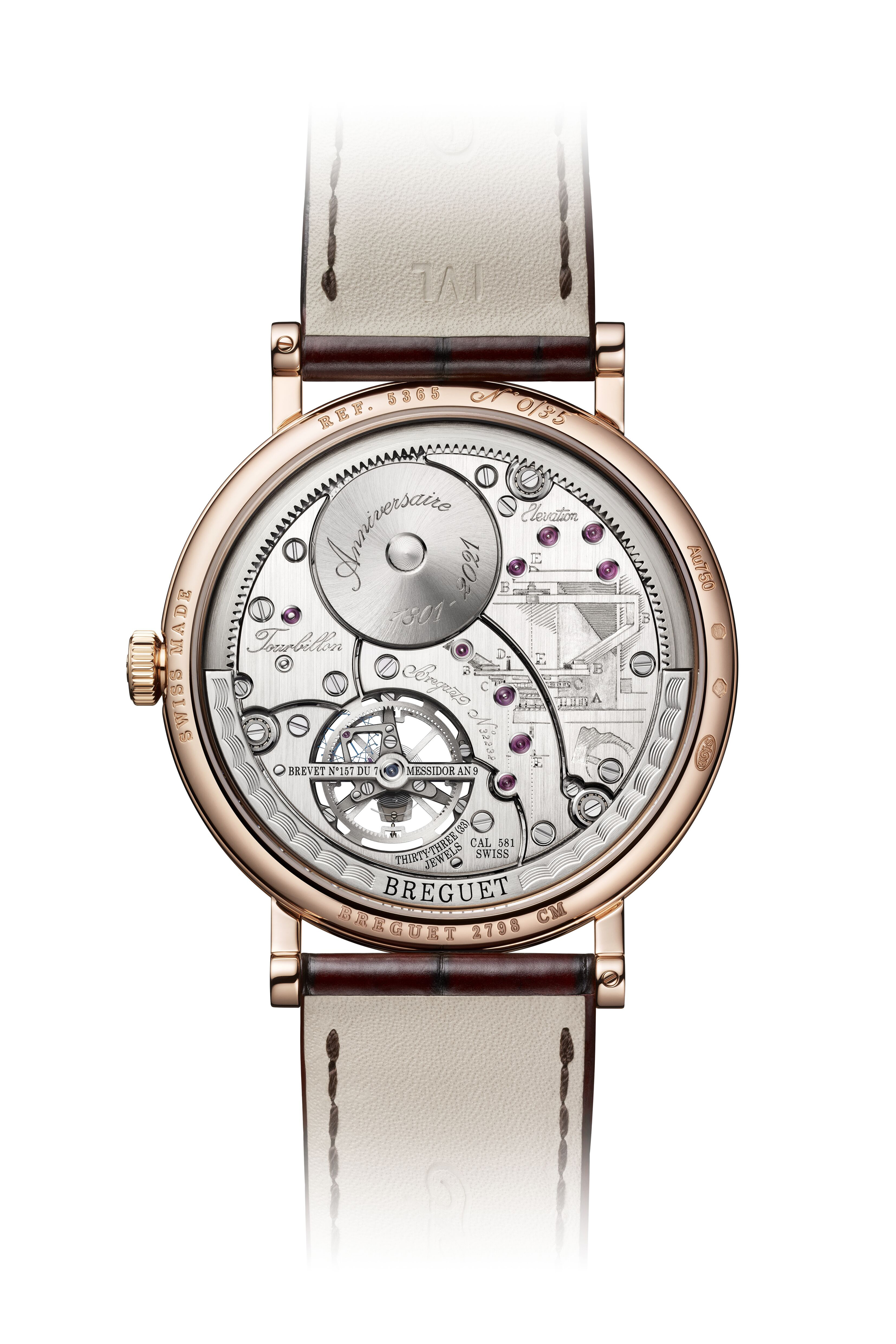 The rear of the timepieces with its sapphire crystal opening showcasing an engraving of the words “Anniversaire 1801–2021” on the barrel, and “Brevet No 157 Du 7 Messidor An IX” upon the lower bridge of the tourbillon. Each timepiece has been individually hand engraved with the Breguet signature and the number of each piece. The right of the movement houses a faithful reproduction of the original watercolour plate that was used by Abraham-Louis Breguet when he was filing his patent application for a tourbillon regulator. 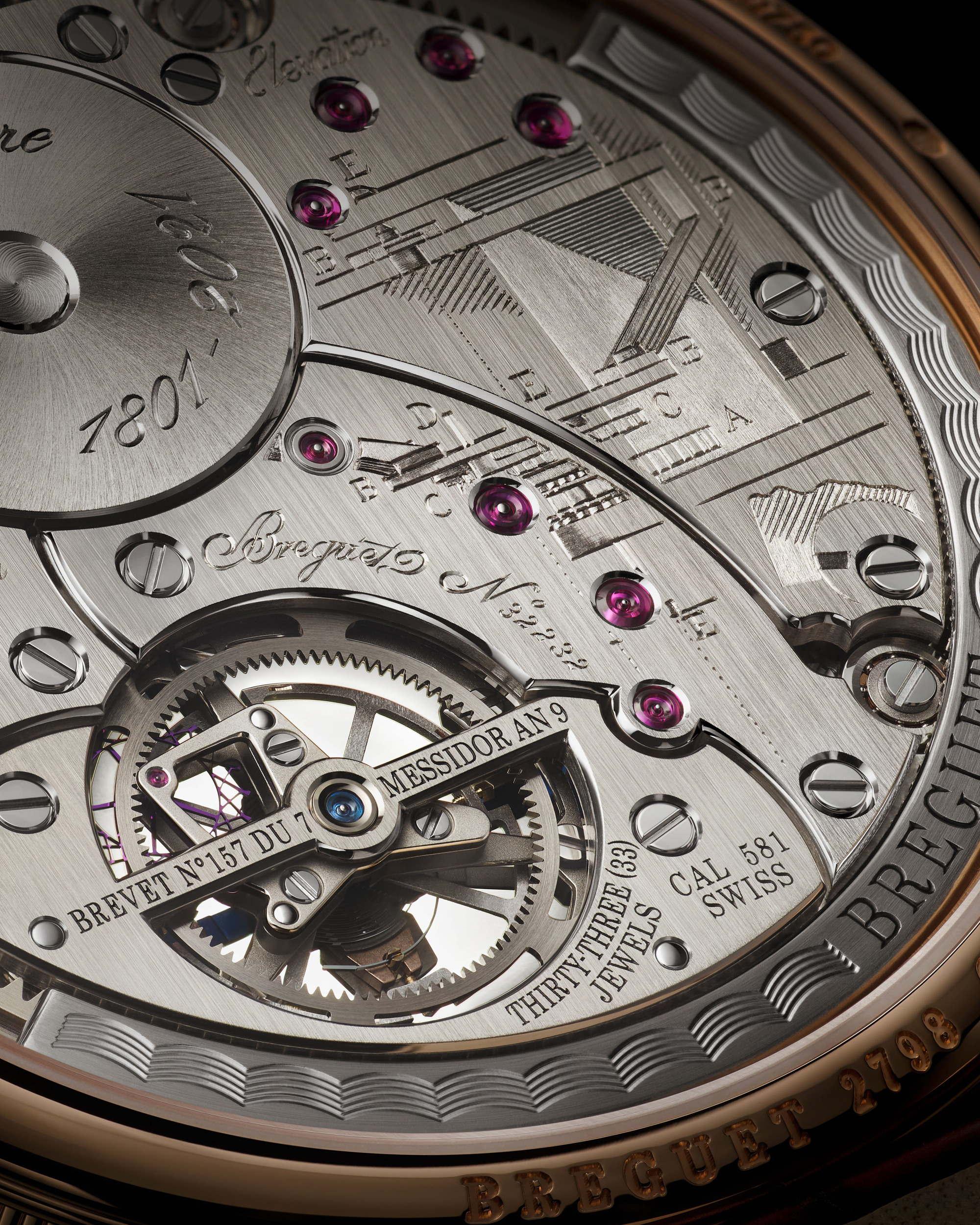 The Breguet Classique Tourbillon Extra-Plat Anniversaire 5365 is powere by and extra-flat automatic movement Calibre 581 that clocks in a power reserve of 80 hours and comes strapped to a brown leather strap.