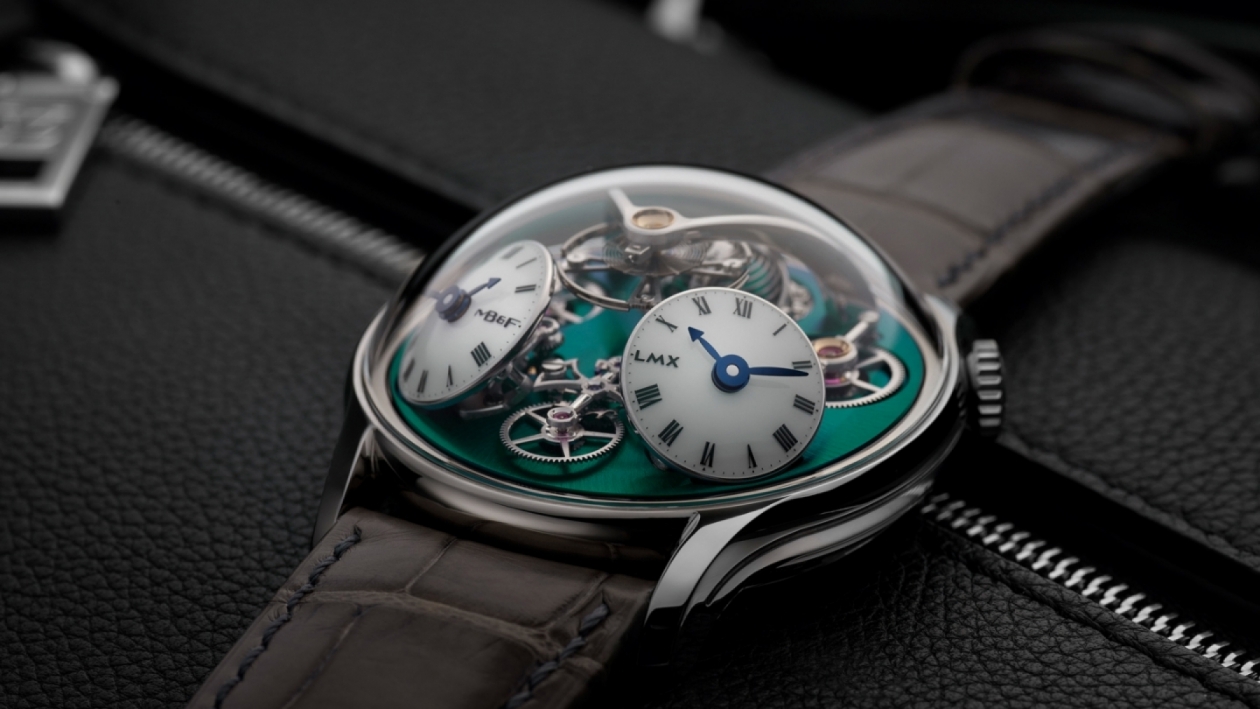 Inspired by the original but featuring new and innovative additions, the LMX perfectly encapsulates the 10 years of MB&F's Legacy Machine collection.

First launched in 2011, the MB&F Legacy Machine timepieces have disrupted the world of horology with surprise releases for 10 years. The collection presented resolutely unconventional horological machines that changed the landscape of MB&F's budding horological lab. The first timepiece - the Legacy Machine No. 1 with a round case, lacquered dials and blued hands – was released in collaboration with two exceptional Friends; Jean-François Mojon, known for his innovative engineering, and Kari Voutilainen, a living legend of classic watchmaking. As the first step of what became one of the most successful collections from MB&F, the LM1 was a rather subtle and more classic take on high-end watchmaking. Since then, MB&F went on to release eight impressive Legacy Machine timepieces which garnered no less than four awards at the GPHG/Grand Prix d’Horlogerie de Genève. 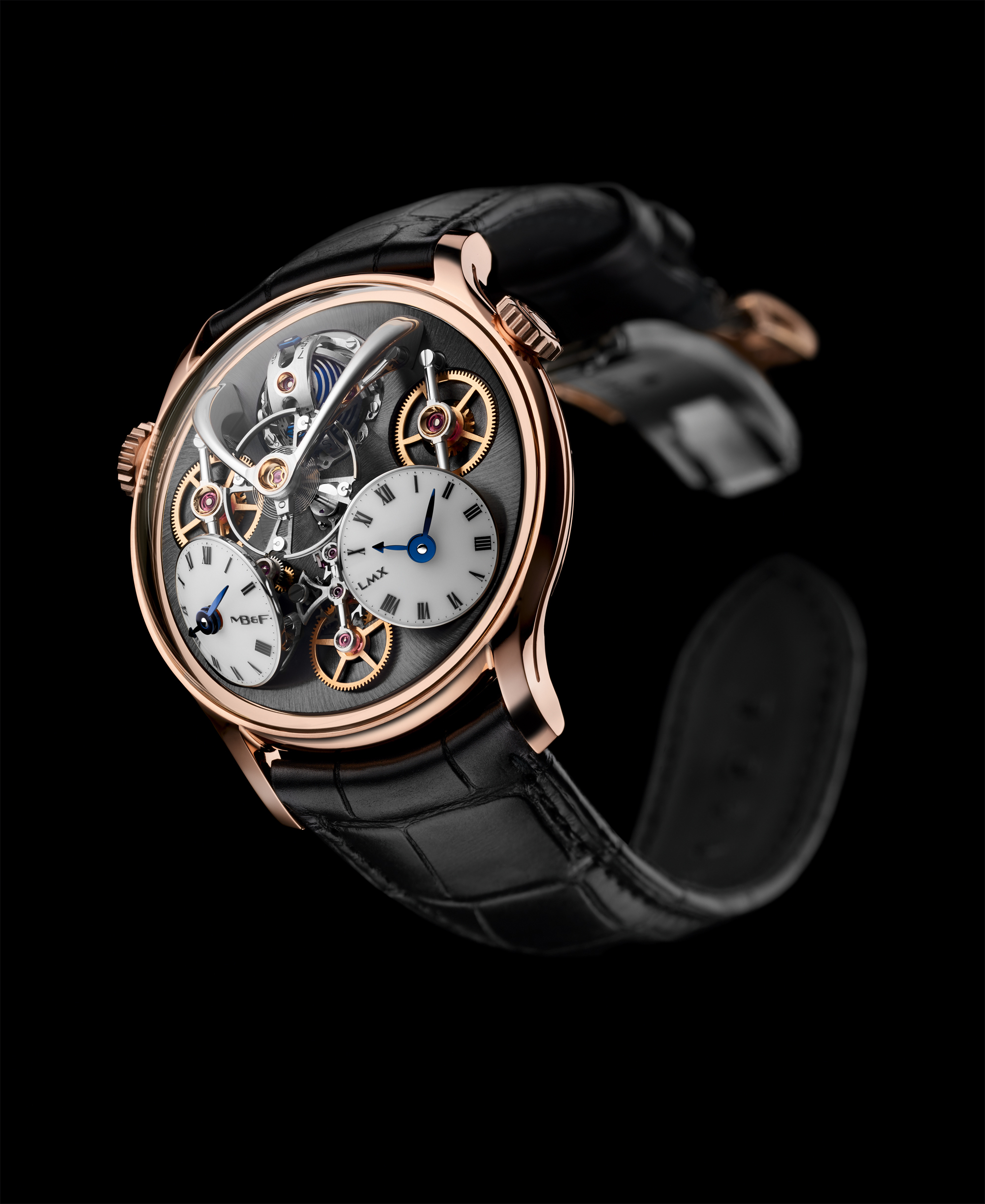 To commemorate this extraordinary achievement, MB&F releases the LMX – a celebration of 10 years of the Legacy Machine. Similar to their other anniversary editions like the HM3 FrogX and the HMX, the “X” in the new Legacy Machine watch also signifies the 10th anniversary of the collection. It is deeply inspired by the very fist Legacy Machine watch – the LM1 with a central flying balance wheel and two dials. The rest of the watch is completely brand new. 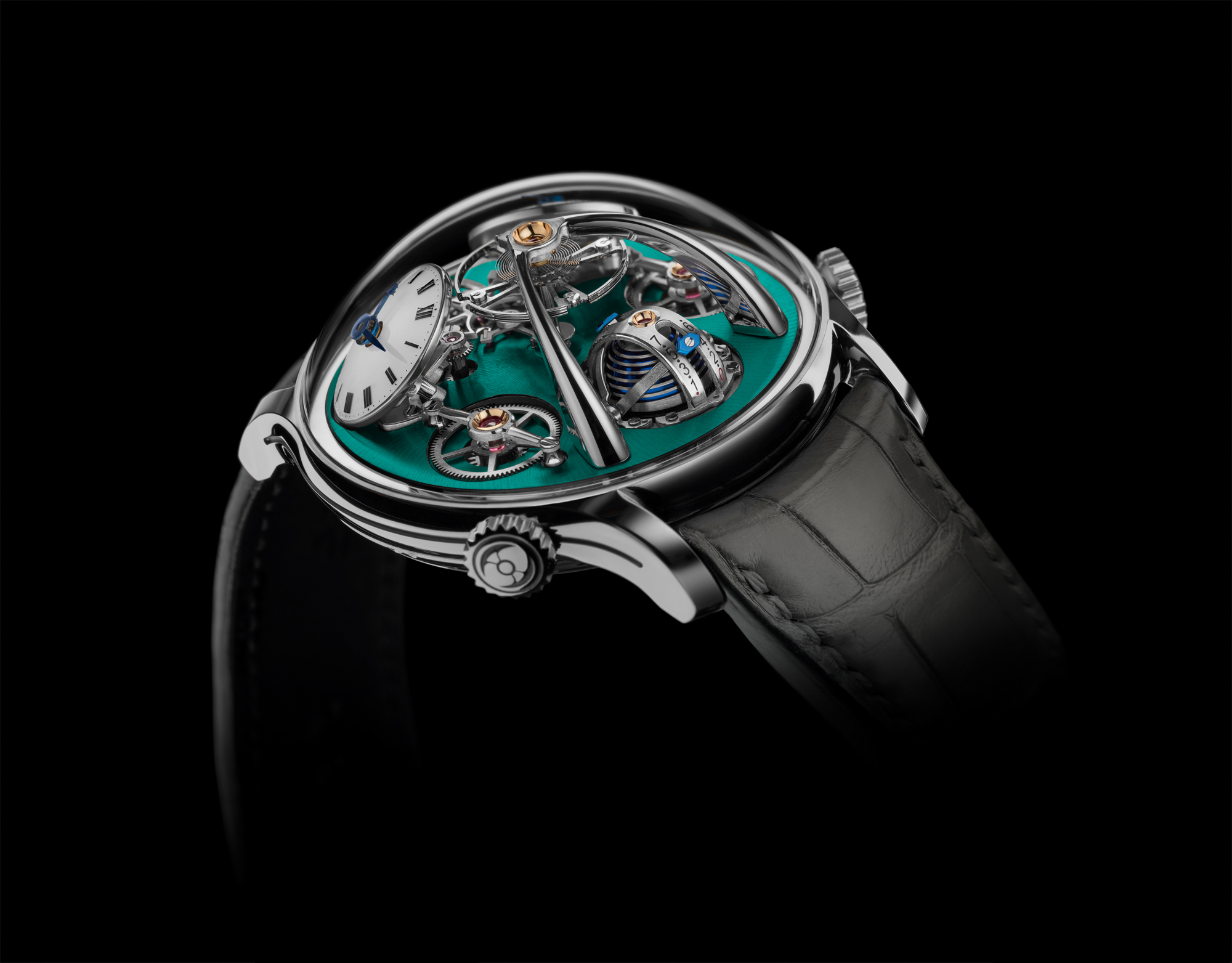 In Maximilian Büsser’s own words, “the LMX is an LM1 on steroids”. It features two white lacquered dials under the domed sapphire crystal that displays its own hours and minutes. The dial on the right is set by the crown at 2 o' clock while the dial on the right which will offer a second timezone is controlled by the globe motif engraved crown at 10 o' clock. These dials are tilted to angle that harks back to the more recent Legacy Machine releases. 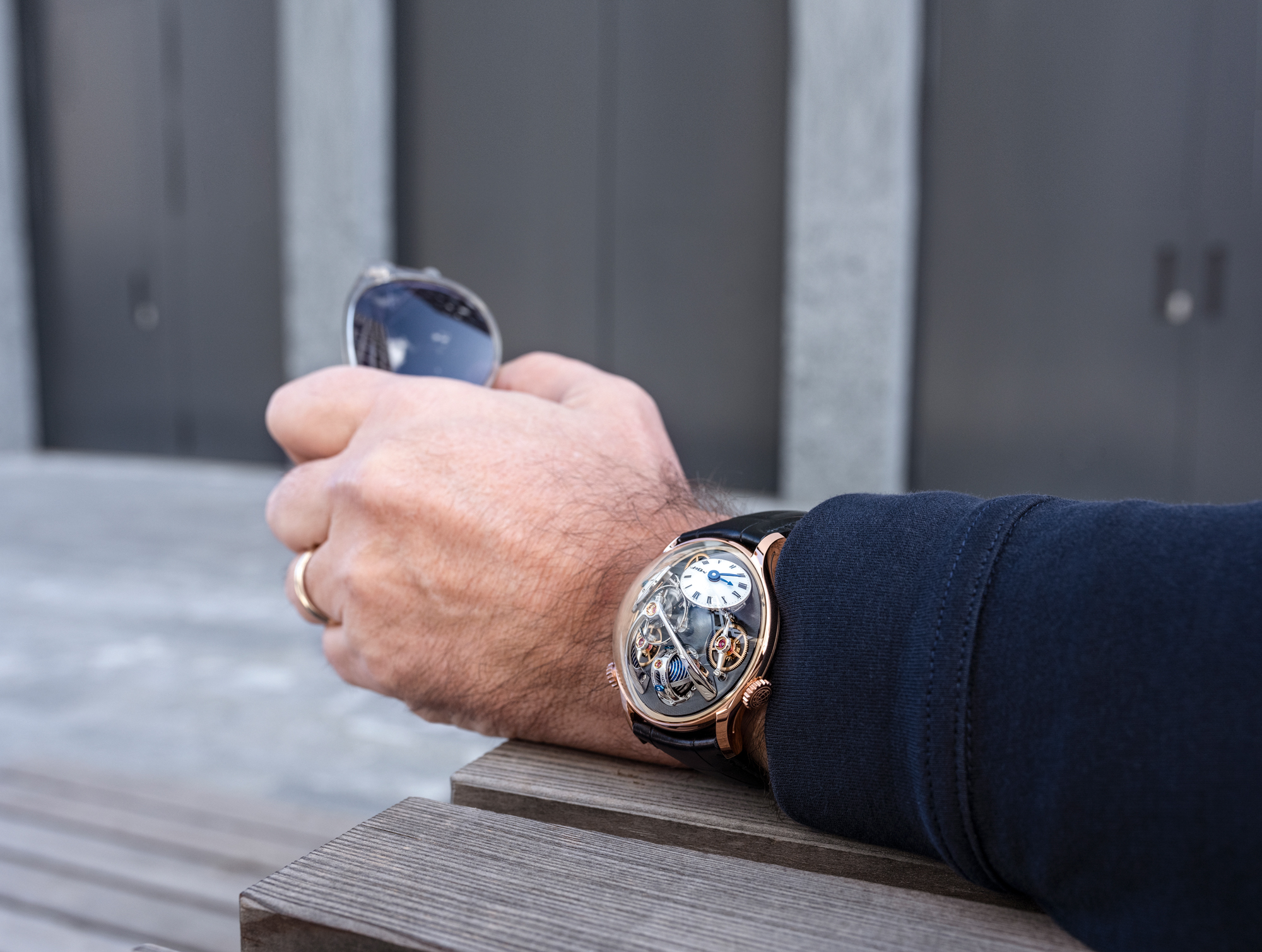 Unlike the LM 1, the sapphire crystal dome unabashedly showcases the mechanical prowess of the movement working within – a theme that was inculcated in the later models of the LM like the LM Perpetual, LM Flying T and LM Thunderdome. It offers a wonderful view of the battle-axe-shaped escapement bridge and gear-train components. Three large wheels are particularly visible: placed next to each winding crown, two are set in motion when setting the time on the corresponding time display, while the gear at 6 o’clock is the common seconds’ wheel. All of this is a part of the new movement; the eighth Legacy Machine caliber in 10 years with a new symmetrical construction that can viewed via the open caseback. Once turned over, the caseback reveals the three barrels, gold chatons and various bridges with polished bevels, internal angles and Geneva waves arranged in a radiating sunray pattern. 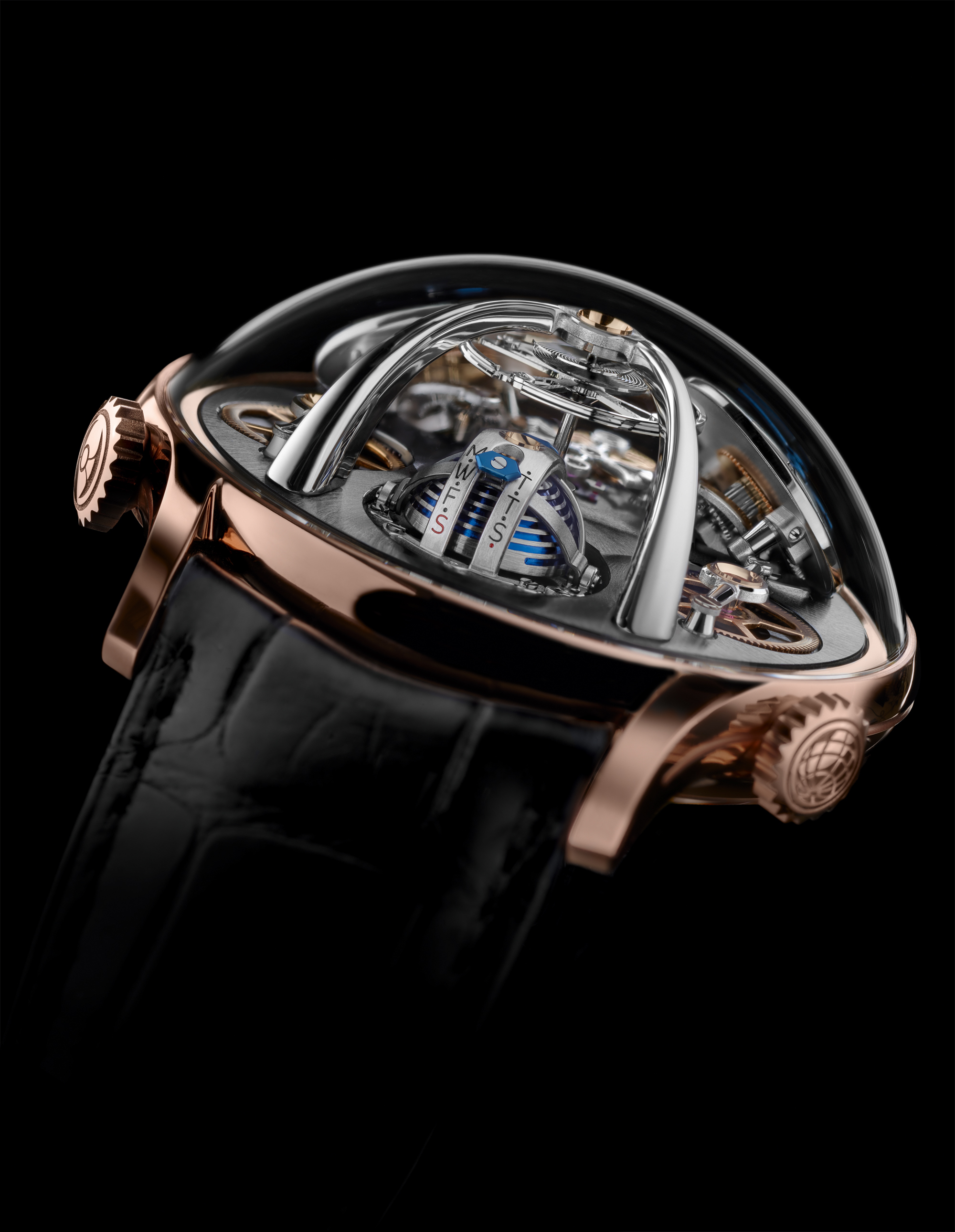 A nod to the 2011 LM1 is the vertical power reserve indicator which has now been updated to be presented in a three-dimensional indicator that showcases a power reserve of a whopping 7 days. This novel component also offers a choice for the wearer between day-of-the-week or numerical scales for countdown. And the entire system of displaying the power reserve rotates! 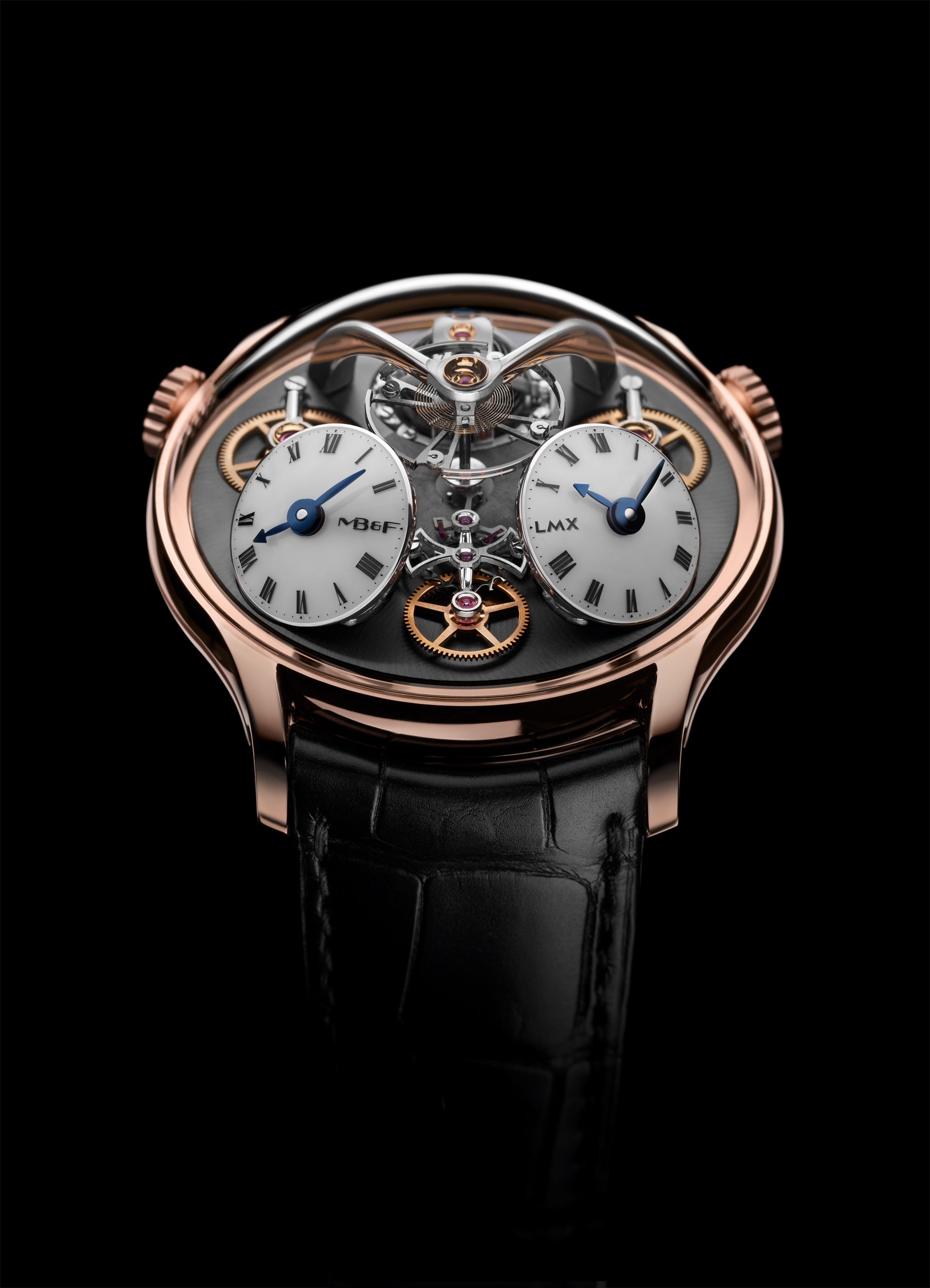 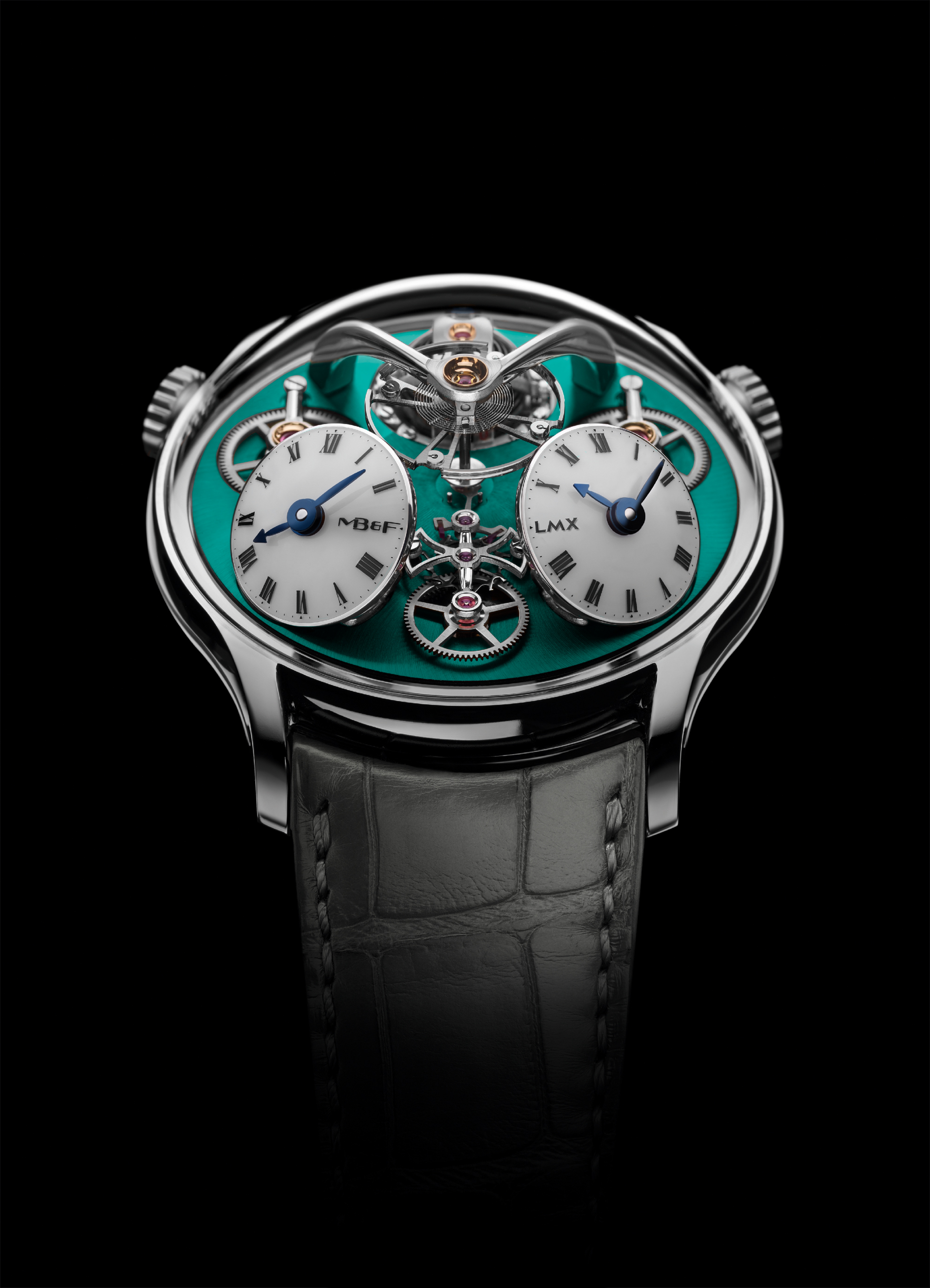